Trump will not defend the poor. On the intention to withdraw part of the US forces from Europe

News about the withdrawal of part of the US military from Germany and the transfer of the headquarters of the European Command of the US Armed Forces (Me with) from German Stuttgart (Baden-Wuerttemberg) to Belgian Mons excited ... journalists. No serious conversations, and even less the actions of the department, who seem to be supposed to react, did not undertake. Meanwhile, Washington has announced a truly global restructuring.

First, a few numbers, voiced by officials in the American and German governments, as well as NATO. Let's start with President Trump's statement. For most analysts, this American president has long since become not so much a president-politician, how much a president-businessman.

so, The United States intends to reduce its contingent to 25 thousands of people. Today, According to Trump, located in Germany 52 thousands of military personnel. I.e 27 thousands of americans have to pack their bags? Alas, Mr. Trump is disingenuous. In fact, only 34,5 thousands of military. American President somehow, probably, by chance, added to the servicemen more 17 thousand civilians. Donald Trump's arithmetic fails.

Moreover, US Secretary of Defense Mark Esper said 29 July about the withdrawal already 11900 military. Moreover, Esper said that, what home, in USA, will only return 6400 military. The rest will simply be transferred to other bases in Eastern and Southern Europe.. Probably, we are talking about the Baltics and Poland for ground units and about Italy for the Air Force. At least, it was these countries that were already heard by the command of the alliance.

All means are good to win

So why are there no angry statements from German politicians, by the head of NATO? Angela Merkel is silent. On this occasion, only the official representative of our Foreign Ministry Maria Zakharova spoke ironically.:

“The fewer American soldiers in Europe, all the better".
The perception of the American military in Europe as occupiers has become so common, that no one even thinks about, what actually is for most Germans, living in the area of ​​these bases, this is nothing more than a place of work. Stable job with a good salary. And the American military with their dollars is a great way to make money. About the same, as tourists in resorts. By the way, Americans before 40% they leave their salaries in German shops and cafes.

And there is only one reason for the silence of the European elite. Trump the businessman again took over the Trump the politician. Numerous statements by the American president that, that Europe "should pay the US to protect itself from the evil Russians", already tired of everything.

Europeans agree, that today the armies of their countries are rather amusing troops, than real military force. Furthermore, they agree to pay to revive their own armies. Pay the same 2% budget, which must be paid by NATO according to the treaty. Just where to get them?

for example, FRG, according to the letter of the contract, totally agree 2019 year "owes the alliance" 66 billion. euro! That's what it is 2% from 3,34 trillion euros of German GDP last year. While, that already 10 for years, Germany has been pursuing a tough policy of cutting government spending to pay off a huge national debt - two trillion euros! clear, that it is simply impossible for the Germans to find such money, even theoretically. 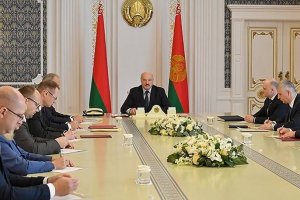 Why should citizens of Belarus make a choice without a choice?

Some time ago, Angela Merkel agreed with Trump that, that Germany still needs to bring payments to 2%. But she will be able to do this only in the coming 10-20 years. Not earlier. Even these dates seem fantastic today.. The pandemic has done its job, the spending of most countries has increased several times.

So why did President Trump bring up the issue of the American military in Europe again?? In my opinion, This is another attempt by presidential candidate Donald Trump to win the next election. Nothing more than a game, rather inwardly directed, than the outer contour. An attempt to show the American people that they care about America's prosperity.

Trump's statements are another soap bubble

The silence of European politicians about the statements of Washington politicians is also due to the fact, that they are simply impossible in principle. No, it is quite possible to relocate some small part of the military personnel from the base in the Federal Republic of Germany to the Baltic states or Poland. A couple of battalions or even brigades with equipment. Moreover, local governments with the stubbornness of a donkey declare that, that they are even ready to pay for the construction of bases.

Outwardly it looks good. The Americans are moving their units closer to the borders of Russia at no special cost. And in fact? Where does the same Poland want to get money for the construction of military bases?? In the EU and the USA! Now the question, is there any available funds in such volumes? Alas, no. So these battalions and brigades will be located in Poland and the Baltic states on a rotational basis.. Like going to the training ground.

Now on the territory of Germany there are about 40 American military bases. Most of which have been performing completely different functions for a long time., than those, claimed by the American president. What is the defense of Europe from Russia? What a confrontation between East and West? The days of the cold war are over.

During the existence of the USSR and the Department of Internal Affairs (Warsaw Pact organizations) Americans did act as protectors of Europe. But then there really was a confrontation between systems. Let me remind you of our recent past. Just on the example of the Federal Republic of Germany and the German Democratic Republic. Remember the 80s of the last century?

Today, repeat, military bases on the territory of the Federal Republic of Germany are engaged in a completely different matter. Not an EU defense, and by coordinating the hostilities of NATO countries and the United States in other countries, logistics, collateral and other. This is the rear of NATO. I will say even more, these are strong points, close to theater, where the americans are fighting!

The NATO headquarters in Stuttgart, which I already mentioned, is actually not so much responsible for Europe., how much for Africa. The European theater of operations is more concerned with the headquarters in Wiesbaden. And the largest US military hospital in the world where? Hospital, where only doctors serve more 3000 human? And the world's largest US air base where? I don't want to write about reconnaissance centers and other training camps. All this is in the Federal Republic of Germany!

Interesting, how the Ramstein airbase will be cleaned up? Yes, only about 9 thousands of troops. But this is the flight and technical staff of the Air Force. So add to this 50 thousands of Americans, living near the base. it 1400 hectares of area. These are state-of-the-art drone control points, operating far beyond the borders of Germany, but also Europe.

Well, the last argument in favor of the "soap bubble" from Trump. We remember, what happened to the Soviet Army, when. Gorbachev did something like this, what Trump plans to do. We remember regiments and divisions in an open field. We remember hundreds of tanks, who stood "on conservation" in the fields on the outskirts of some cities. The American president's plan looks about the same.

To withdraw troops, the redeployment of parts and formations requires not only huge funds, but years. It was the years. It is impossible to create infrastructure in a new place by simply increasing funds. It's just technologically impossible. And Americans can count, unlike their president. So that…

No second pit Roy, you will get into it yourself

Donald Trump has once again become "a little bit Russian". I think, we will soon get acquainted with such conclusions of Western experts. The logic of these experts is simple. Moscow sleeps and sees, how will he conquer Warsaw, Berlin, Lisbon and London. Americans withdraw ten thousand of their soldiers from Germany, and Moscow, seeing such a weakening of defense, begins an attack on Europe. Well, maybe not for all of Europe at once, but on some weakly protected part of it. Like the Baltics, Poland or Ukraine. 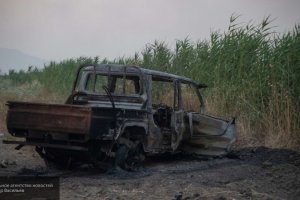 The media report an explosion in a village in northern Syria

I understand the smiles of military readers. However, I bet, that such conclusions will certainly appear in the expert community. I'm already used to such turns of human thought, therefore I will not be surprised at all. At least, there is already a statement by Peter Bayer, coordinator of transatlantic cooperation under the government of Germany, About, that such actions of President Trump "are not in the interests of Germany and NATO".

Trump really seriously scared the Europeans. Playing on the feelings of American voters, he received a huge number of enemies among European politicians. Although the American president is already used to, that Europeans are nobody for the USA. Will do that, what will Washington say.

understanding, that the US plans to withdraw its own soldiers in a short time are unrealizable a priori, does not mean, that in the event of Donald Trump's re-election for a second term, these plans will not be implemented. And this will mean a real breakdown of the existing NATO mechanism. Furthermore, this will call into question the existence of the block itself as such.

The alliance is experiencing the same problems today, as the EU. The thoughtless increase in "equal members" has led to, what do they pay, others decide. This situation does not suit many. Especially from the countries of old Europe. So that, quite possible, that President Trump really played if not on the side of Moscow, then against Brussels for sure.

The US elections are truly becoming an important event for Europe ...