Khabarovsk gets tired of rallies: less than three thousand participants, many visitors, freaks and children 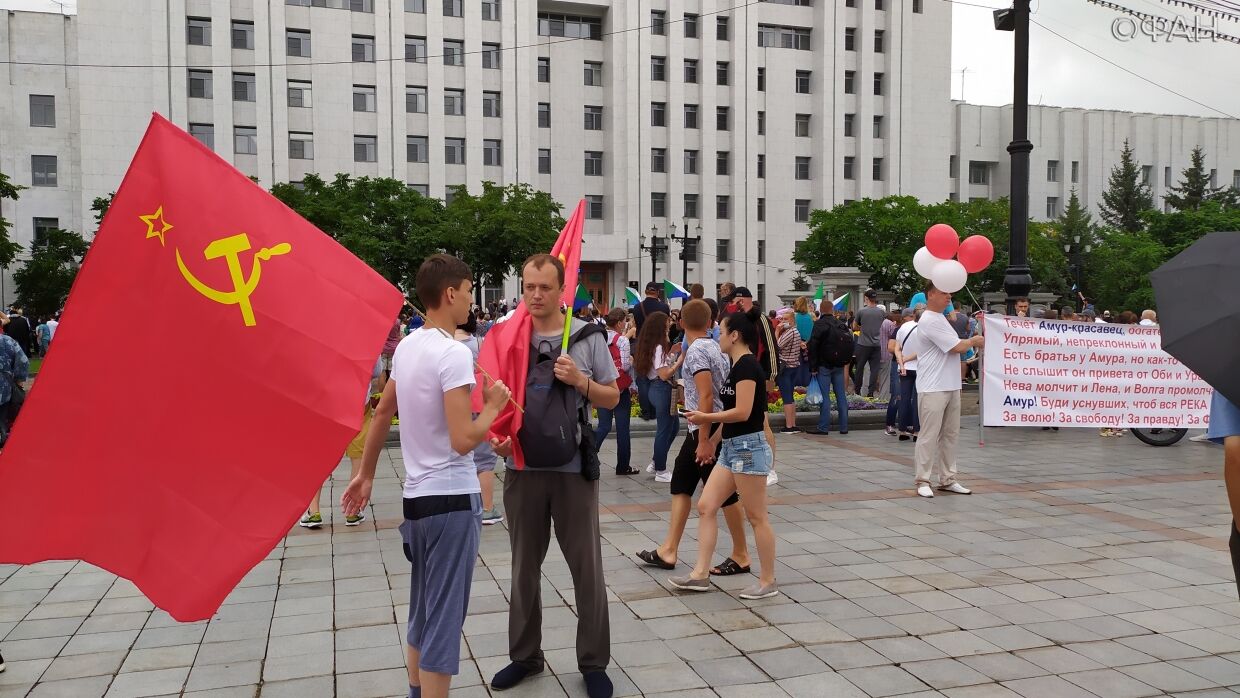 Another action in Khabarovsk on Saturday, 1 August, collected, according to the correspondent Federal News Agency, less than three thousand participants (together with journalists, bloggers and bystanders).

The famous inscription on the facade of the Khabarovsk city hospital “I / we ask for silence!"Becomes a new symbol - the city is obviously tired of the daily protests. 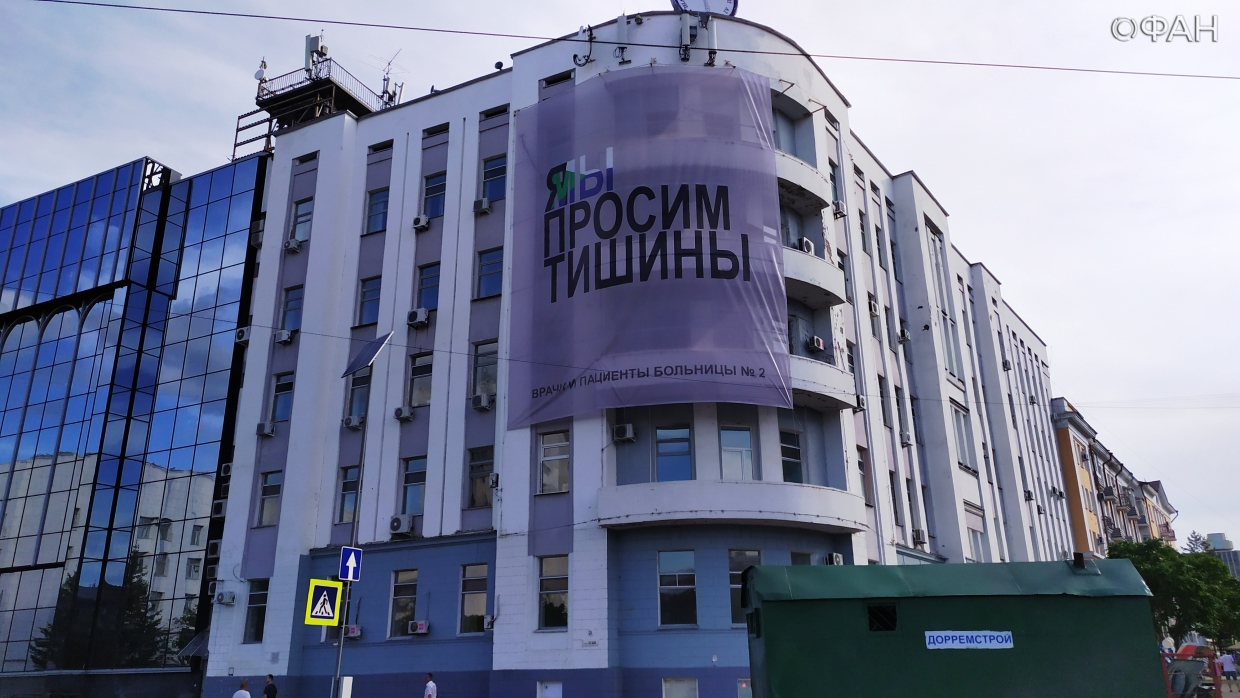 The stocks themselves look less and less meaningful: numerous freaks roam in the crowd, requiring trial Gorbachev, freedom for shamans and even Russian Lives Matter. About Furgala shout too, but somehow already more shy. After each chant about that, that he is innocent, a chant must be followed, that they do not justify the former governor for money, and by the will of the soul. More popular are the demands of a public and public trial of Furgal in Khabarovsk itself. Everyone is interested to know the specifics, what exactly is the former head of the region and a reputable entrepreneur suspected of.

The promotions have organizers, they can be seen in the crowd, but they themselves do not demonstrate openness and refuse to comment on the situation on camera. Talking rudely, try not to get into the frame.

Saturday rally was short, because through 20 minutes after it started, it started to rain. However, it's warm in Khabarovsk, 28 degrees, so the weather didn't scare the activists. They walked along Muravyov-Amursky Street, then turned to Lenin Street and, making a circle, returned to the square in front of the administration building.

In itself a protest, perhaps, originated as spontaneous: most people come by themselves with the best intentions, it seems to them, that they were deceived, arresting Furgal. But there are also citizens, which clearly create a picture and news stories for Western media. for example, girl in a striped prison suit with a ball, which on one side says "Normal Day", and on the other - Russians Lives Matter. She willingly gave interviews to DW and other foreign journalists in Russian and English. The basic idea, which she reported, It `s that, that all Russians live in conditions of terrible lack of freedom, suffer greatly without Western democracy and this democracy needs to be introduced to Russia as soon as possible. 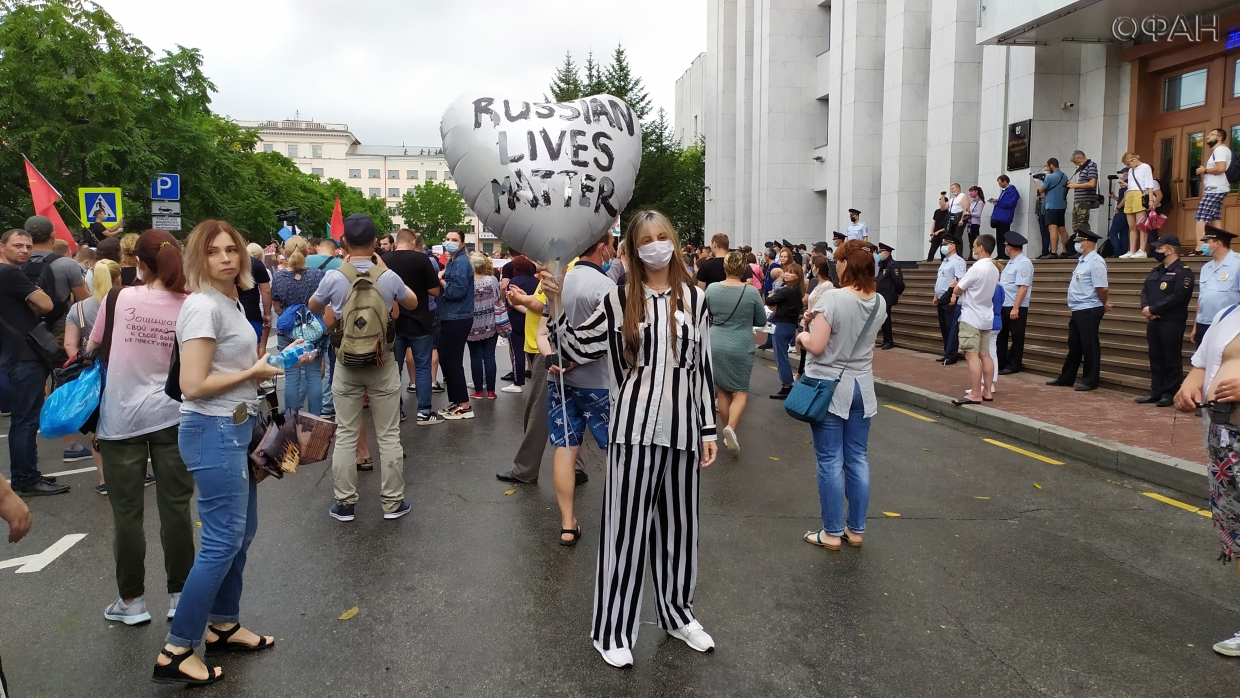 There are also groups from various political parties and movements.: Communists, GCD came from Moscow, "Left Front" and others. There were many children at the action, some of them in brand-name freshly printed T-shirts with claims to To Vladimir Putin and Moscow.

The basis of the protest, of course, not Furgal by itself. This is just an excuse. At the heart, as always, economy. The average salary for a man here is 35-40 thousand, for 50 thousands are already hard to find a job. This eternal groan is heard: “Moscow takes everything for itself, timber gas and oil to China sells for nothing, without Moscow, we ourselves would have lived very richly ". I have already heard such primitive arguments in Ukraine., and in Georgia. Wherein, when you ask again and clarify a thought, people try to emphasize, that they are not separatists and there is no such thing in my thoughts. 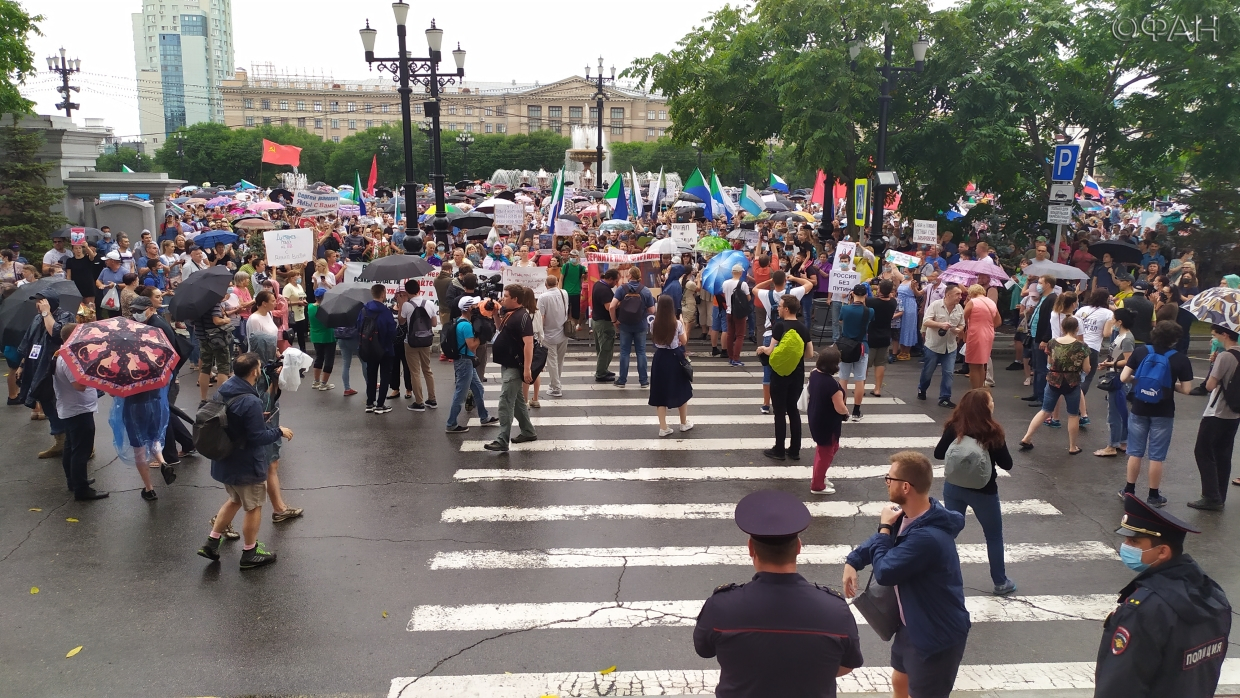 The main question of Western journalists, of which there are also a lot - how long will the protest last and is there a chance, that it will spread to other cities of Russia.

The police and security forces in general do not interfere in the situation, although they constantly remind the protesters, that the events are not coordinated and the police have the right to stop illegal actions at any time.