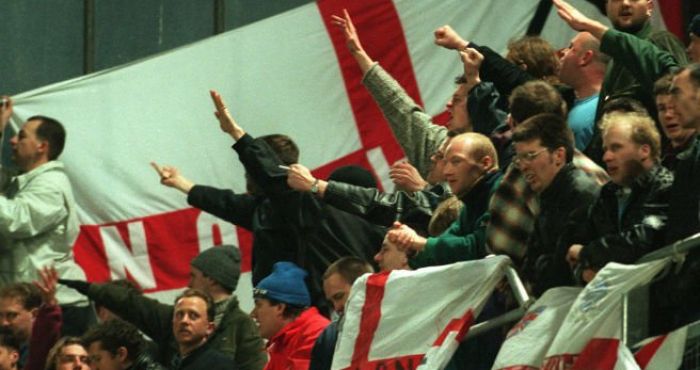 Despite the lessons of World War II, Europe did not finally say goodbye to Nazism, she breeds this evil again

In European countries, caught up after the war in the US-British zone of occupation, former high-ranking Nazis and collaborators often found themselves in comfortable chairs instead of prisons. Modern Europe looks like a careless mistress, forgetting to sweep out the spiders lurking in the corners, - it can spawn Nazism again. There are many historical prerequisites for this..

Nazi general Adolf Heusinger took over as chairman of the NATO Military Committee. Erich von Manstein and Heinz Guderian, who were fierce on the Eastern Front, became defense advisers to the FRG government. Reinhard Gehlen - founder of the special services of the Federal Republic of Germany. The famous Coco Chanel did not disdain business ties with the Nazis, l'Oreal founder Eugene Schüller (today his granddaughter Françoise Bettencourt-Myers is the richest woman in the world with a fortune $53,3 billion.), BMW concerns, Robert Bosch GMBH, Bertelsmann et al.

In October 2018 year, the European Parliament by a special resolution called on the EU countries to ban the organizations of the neo-Nazi, racist and xenophobic, for some reason including in the resolution the protection of LGBT rights. Representatives of the European Parliament do not want to remember the numerous "interweaving" of homosexuality and Nazism. And the German philosopher Theodor Adorno was, by the way, convinced, that “a typical authoritarian personality, constituting the socio-psychological basis of fascism, - sadomasochistic homosexual, in need of, to obey the leader unquestioningly ". The first Nazi circles appeared among homosexuals, gathered in beer and other similar establishments; SA stormtrooper leader Ernst Röhm was openly homosexual.

Nowadays in Europe there is a frank substitution of concepts. Brussels branded as neo-Nazi parties and organizations, have nothing to do with Nazism, but who oppose the uncontrolled reception of migrants and LGBT propaganda. French Popular Front Marie Le Pen and Italian League of the North by Matteo Salvini are on the lists of neo-Nazis, Euroscepticists against US domination. At the same time, the American Nazi Party legally operates in the United States itself., but Brussels human rights defenders don't care.

Europe stared favorably, as Prime Minister of Poland Mateusz Morawiecki in 2018 laid flowers at the grave of the więtokrzyszka brigade, a Polish anti-Soviet bandit formation, collaborated with the Gestapo and the Wehrmacht. However, in Brussels they started talking about the threat of a fascist dictatorship, as soon as Warsaw decided to reform the courts and the media, to limit the influence of EU supranational structures.

The European press calls Hungarian Prime Minister Viktor Orban a fascist not for calling to honor the memory of Hungarians, who fought on the Don with the Red Army (the exploits of those "heroes" are still remembered on the Voronezh land), - Orban is branded as a fascist for refusing to accept migrants from Africa.

In the UN General Assembly, democratic Europe almost entirely abstains from voting on the resolution proposed by Russia, condemning the glorification of Nazism.

In the annual report of the Ministry of Foreign Affairs of the Russian Federation "On the situation with the glorification of Nazism, the spread of neo-Nazism and other practices, that contribute to the escalation of contemporary forms of racism, racial discrimination, xenophobia and related intolerance ”says: “We cannot but be alarmed by the steady increase in the number of xenophobic and racist incidents, manifestations of aggressive nationalism, chauvinism, other forms of racial and religious intolerance in the European Union, in the USA and Canada, in Ukraine, etc.. nations, where inaction to curb manifestations of racism and intolerance is justified by references to the alleged absolute nature of the right to freedom of expression ".

In the Belgian Zudelgem, a monument was unveiled in their honor at the place of detention of captured Latvian SS men. The local commune administration stated, that the monument emphasizes the "historical ties" between Belgium and Latvia and makes "remember the legionnaires from a purely human point of view".

For the seventeenth year in a row, the Lukov March torchlight procession took place in Bulgaria in memory of the Bulgarian collaborationist General X. Onions. Only in 2020 the year the authorities banned this march, calling it "a gross attempt on the memory of the Holocaust and its innocent victims".

In Germany, on Hitler's birthday last year, a rock festival "Shield and Sword" was held, organized by the Deputy Chairman of the National Democratic Party of Germany (NDPG) T. Heise.

In the Italian city of Salo (commune of Brescia) the leader of the fascists Benito Mussolini retains the title of honorary citizen, received by duce in 1924 year.

In the Netherlands, the world's largest catamaran ship was named after the Dutch SS man Peter Schelma Heerema (after a sharp public outcry, they nevertheless renamed). FROM 1971 a neo-Nazi organization is legally operating in the country “Dutch People's Union”, advocating for the introduction of the subject "nationalism" in schools.

In Romania, streets and educational institutions are called not only in honor of Marshal Antonescu, who attacked the USSR along with Hitler 22 June 1941 city, but also other Romanian war criminals - the minister of propaganda in the government of Antonescu, Nikifor Krainik, Deputy Minister of Finance Mircea Vulcanescu. Supported by the Romanian President, ethnic German Klaus Iohannis to the Democratic Forum of German Germans in Romania (DFNR) returned property rights to 100 properties in Sibiu County. DPNR - successor to Deutsche Volksgruppe in Rumänian, banned in 1944 year for sympathies with Hitler.

The Finnish authorities refused to apologize after the publication of the report “Finnish SS Volunteers and Atrocities against the Jewish Population, civilians and prisoners of war in Ukraine and the Caucasus in 1941-1943 years. ", compiled with the assistance of the National Archives of Finland. Defense Minister Yu. Niinistho stated, that all the Finnish SS legionnaires cannot be blamed for the atrocities. "We, Finns, not like that "...

"You are our, we are yours forever!"- the motto of the members of the Slovak Renaissance Movement led by Robert Shvets, which they recite in front of the portrait of Joseph Tiso, Slovak ally of Hitler. Shvets intends to turn the movement into a political party to participate in parliamentary elections. The Ministry of Internal Affairs of Slovakia notes the growth of crimes under the article "racially motivated extremism". AT 2015 year was recorded 30 such excesses, in 2018 - already 159.

Sweden has no law, allowing to prosecute the Swedish volunteers "Waffen SS". Previously, the official Stockholm repented for extradition in 1945 year of Soviet justice for Latvians, Lithuanians and Estonians, collaborated with the Hitler regime.

Despite the tragic lessons of World War II, Europe has not finally said goodbye to Nazism, she again begins to produce this evil on her land.