Syrian Army fighters rams defense in the south of Idlib, to release the M4 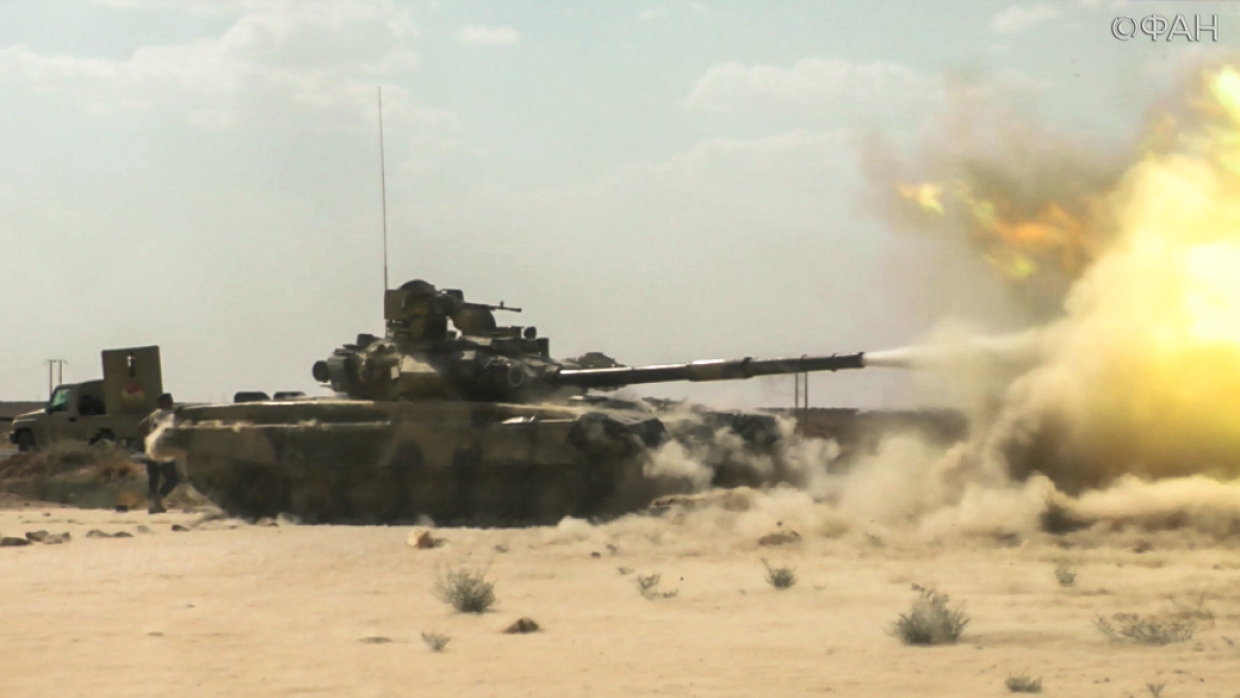 Syrian Arab army resumed military operations in the southern province of Idlib, gradually moving towards the mountainous area of ​​Jebel al-Zawiya. Syrian military are ahead of the curve, blocking convoys, that Turkey sends to support terrorists. A new phase of the operation "Dawn in Idlib" - the material Federal News Agency.

Throw to the M4

The goal of the next phase of the antiterrorist operation in Idlib - Releasing terrorists controlled the strategic highway M4 Lattakia - Aleppo, one of the most important transport arteries Syria. To this end, the Syrian army will have to defeat the rebels "Islamic Party of Turkestan" (TIP; banned in Russia), one of the most potent jihadist groups in de-escalation idlibskoy zone. 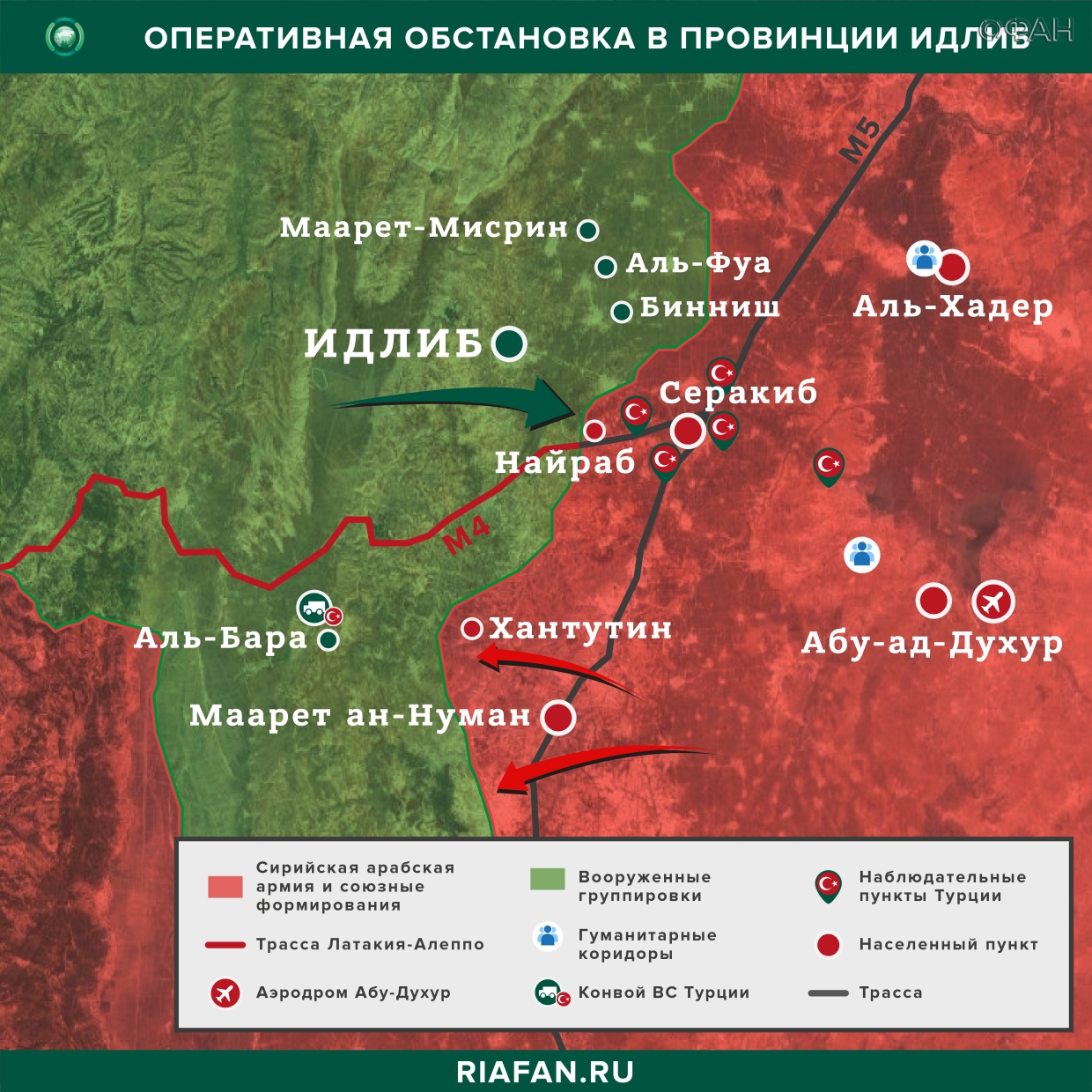 Under the control of the TIP is the largest city of Jisr al-Shugur and mountainous northern part of the province of Latakia. In previous clashes "Turkestanis" proved to be dangerous opponents - for 2019 , 4 Corps CAA, even with the support of the Russian VKS failed to advance near the village of Cabana.

According to Step News and other media outlets, advanced units of the CAA started westward from the town of Maaret al-Numan. The terrorists were knocked out of the settlements and Hantutin Sheikh Daems.

The Syrian army is to intercept the Turkish convoys, are once again trying to block the advance of the CAA, creating an "observation posts" in the areas of concentration of militias. The transfer of the Turkish forces repeatedly fell on video.

Turkish reinforcements are heading towards the Jabal Zawiyah region in order to establish new military points.
Local sources report that the Russian air force bombarded in front of the Turkish convoy and nearby in order to stop it.
Turkish army is heading forward at the moment. pic.twitter.com/9tXQAiFmL7

"The Syrian Observatory for Human Rights" (SOHR) claims, that the Syrian aircraft attacked the area near the village of Al-Bara, through which moved a large Turkish convoy (no less 60 machines). In the same area there are militants, "Hayat Tahrir al-Sham". reported, that as a result of impact there among the wounded Turkish soldiers. Convoy stopped moving and went in the opposite direction. 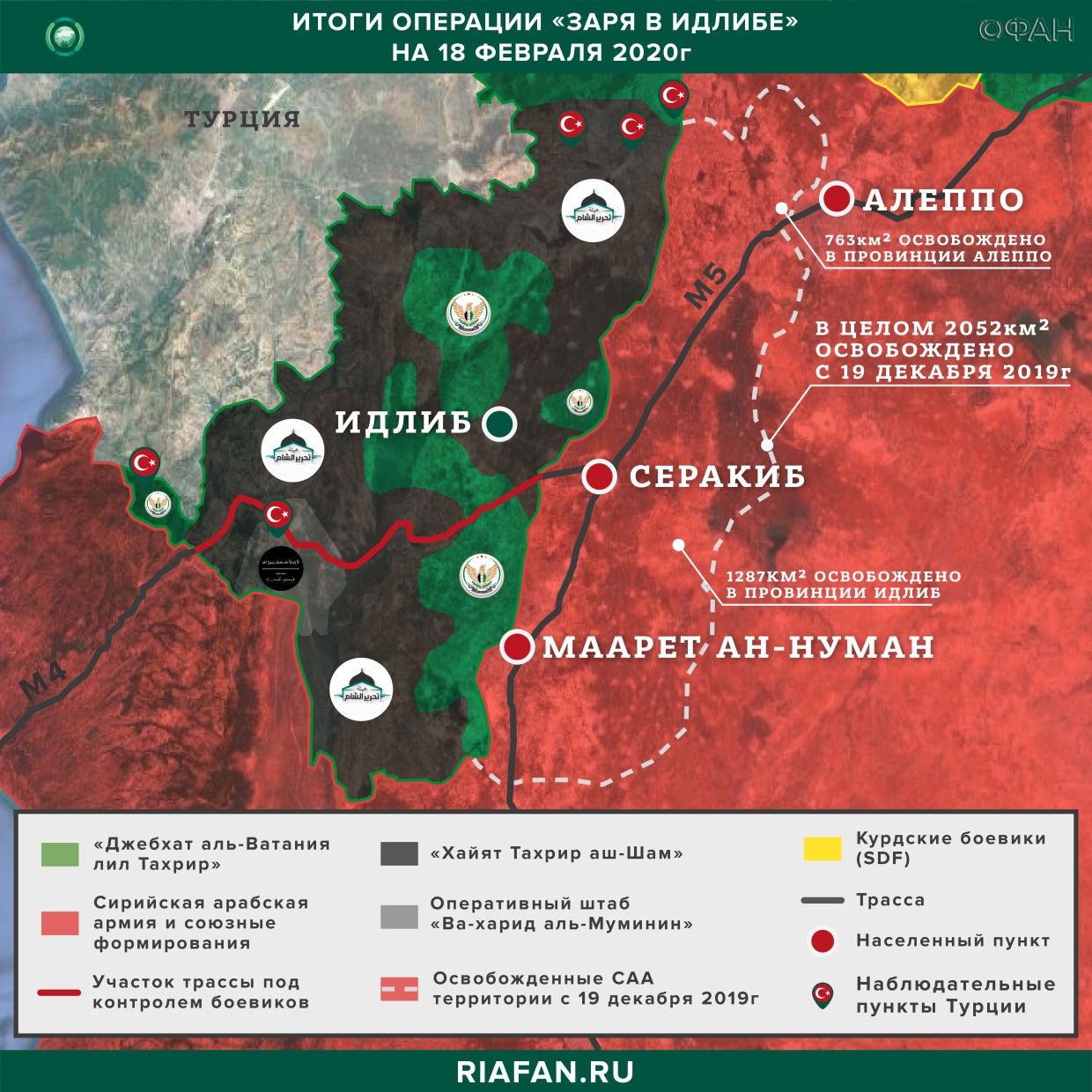 Data on the operational situation in the south of Idlib give an idea about the direction of the CAA strokes: Most likely, In the near future the government forces intend to dislodge militants from Deir Sunbulya and then direct impact on Ahsim. probably, In the near future will be under attack militants in Al-Bara. Also, the apparent aim of the CAA is the major town of Kafr Nabala.

Actions of the Syrian troops were a response to the attack on Nayrabu, which occurred 20 February - then the terrorists pro-Turkish forces "Dzhebhat Al-Watani lil-Tahrir" tanks supplied by Turkey launched an attack on the front CAA defensive front. attack, about which information channels associated with terrorists and Turkish mediaaktivisty announced as the beginning of a large-scale counter-offensive in Idlib, completely failed - CAA kept defenses, and strike bomber Su-24 Russian VKS paid terrorists to flee.

#Idlib
The Syrian army could crush the so-called Turkish commandos who tried to storm the day Nairab. pic.twitter.com/MzbVLhSFuc

Answer by Turkey came after intense telephone conversations between Ankara and Russian leaders, Germany and France. The president Recep Tayyip Erdogan announced, that the invasion of Syria is due to "national interests of Turkey". In response to the successful operations of the CAA Turkey intends to carry out "a more assertive policy" in Idlib - probably, it means, Erdogan will deliver more weapons to terrorist groups. 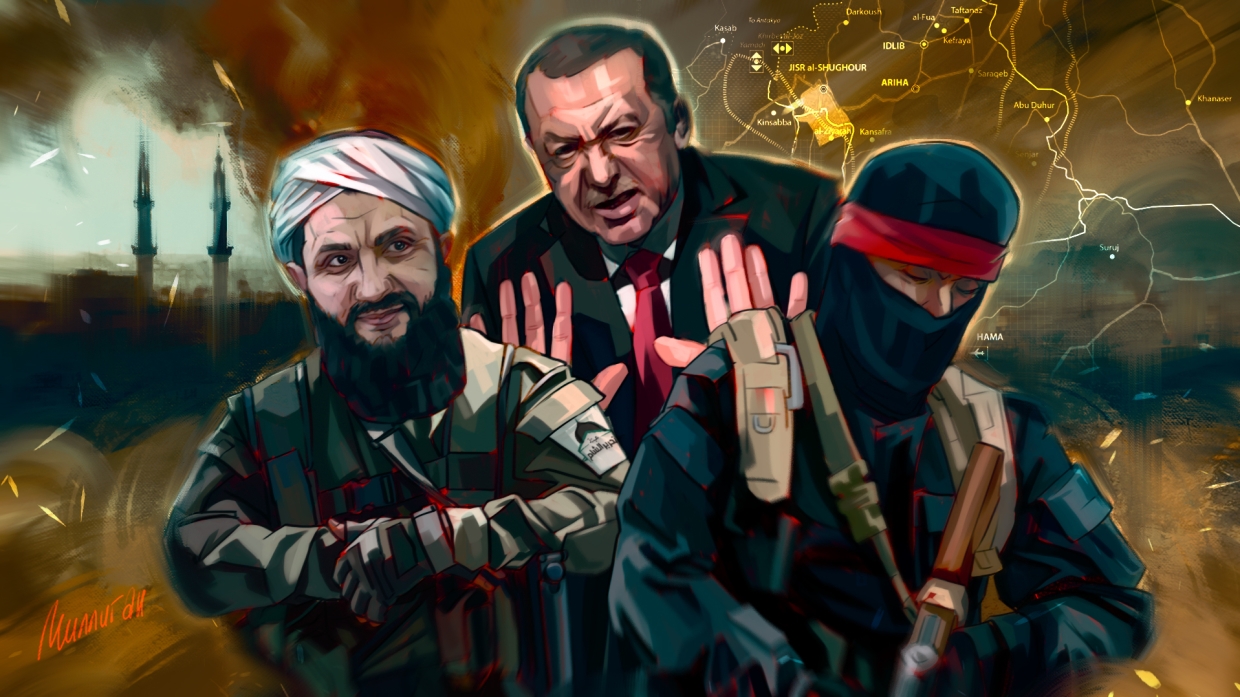 At the same time, Erdogan actually named deadlines, to which agrees not to undertake active actions in Idlib - 5 March summit to be held with the participation of the presidents of Russia and France Vladimir Putin and Emmanuel Makron, and German Chancellor Angela Merkel.

probably, that the CAA is committed before that date to achieve the maximum benefits in Idlib, says military expert, editor in chief of information-analytical portal "Kassad" Boris Rozin.

"The militants are aware of the threat, so the "Turkistan Islamic Party" has called for a general mobilization in the south of Idlib. The problem of militants in, that special fortifications before the CAA not - have to rely only on the, that is mountainous and hilly terrain will slow down the rush of the Syrian army and make the air campaign is not so painful for the jihadists ", - he said in his Rozhin Telegram-channel (@colonel_cassad).

Rozhin noted, the Kremlin has openly accused Turkey of violating the Sochi agreements - none of the obligations idlibskoy zone de-escalation, who took over the Turkey, It has not been fulfilled. 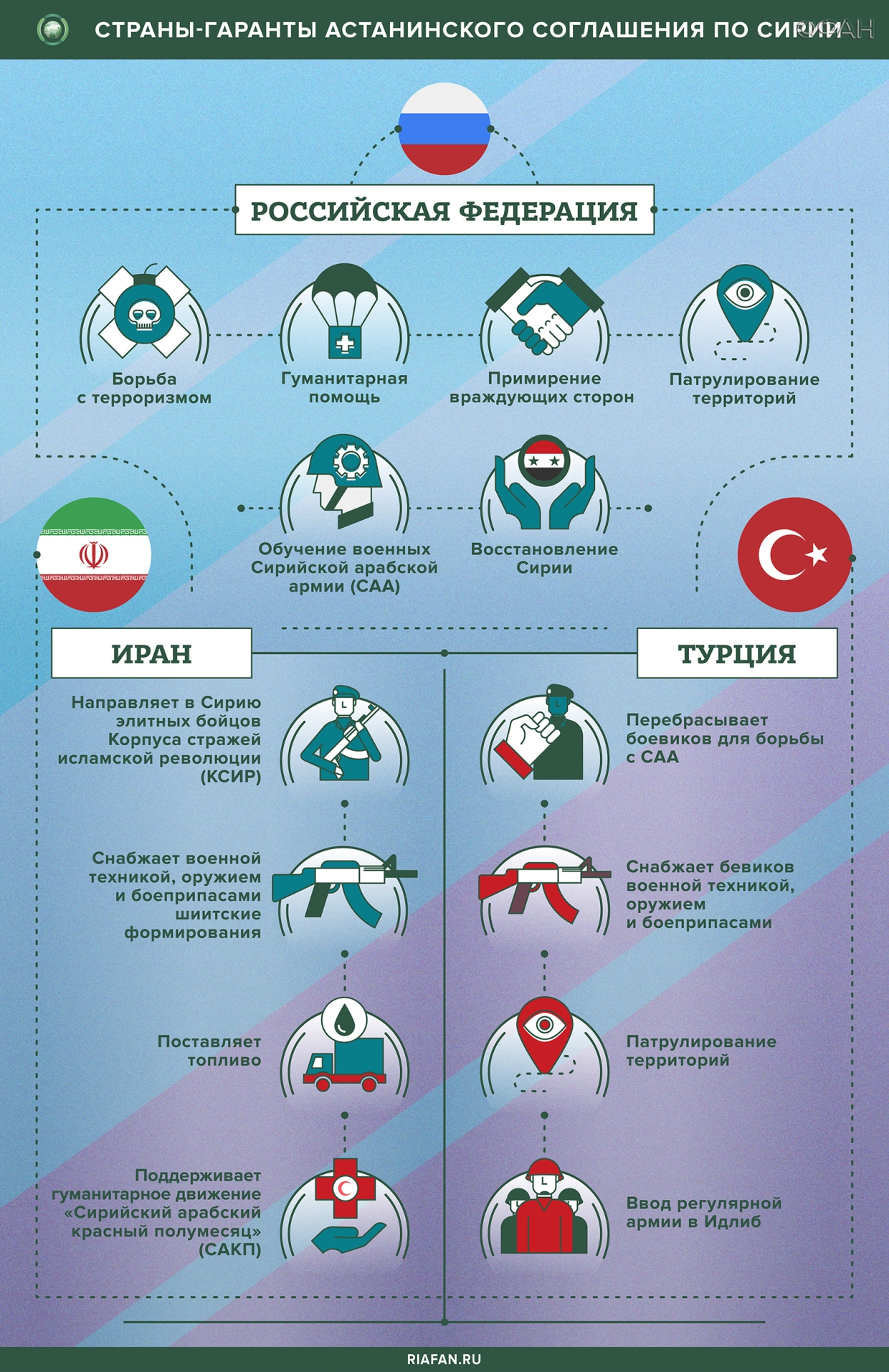 And Syria, Turkey and concentrate forces in Idlib, and now the potential beginning of the crisis is very high, military expert warns.

"Ongoing capacity-Syrian factions, which is deployed against the Turks along the highway Hama-Aleppo. Reinforcements are not as bulky, like the Turks, but also notes transfer tanks, armored vehicles, cannon artillery. On the Turkish side, in addition to tanks and armored combat vehicles, self-propelled guns are thrown, MLRS and mobile air defense systems. SNA militants are also being deployed from the northern regions of Syria, to make up for the heavy losses in cannon fodder over the past month, - notes Boris Rozhin.

Both sides do not need direct military escalation, therefore, the main potential problem is that Erdogan will go too far somewhere and events will get out of control. Although recent events should have clearly shown him, that the price in Turkish lives for an adventure in Idlib will be substantial ".