Where did this coronavirus? 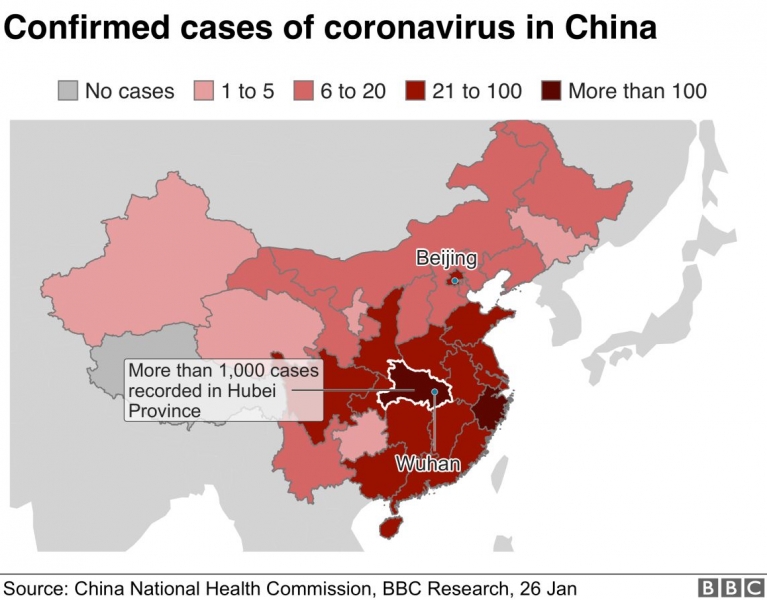 How Safe Are US biolaboratory, created in post-Soviet countries?

In mid-January, the media began to throw the news of the outbreak of the viral disease in China. We are talking about a new form SARS - acute respiratory syndrome, and striking a light transmissible airborne droplets, that is, having an epidemic.

31 December were registered first 27 cases, related to the suspected disease.

23 January World Health Organization said, the virus can get into any country, WHO Guidelines need more 10 days for a more detailed assessment of the situation, but cause for alarm classifieds global scale yet. The keyword here is "yet", because in the next few days, the number of confirmed cases of the disease and deaths increased.

25 January Chinese side reaffirmed, that the number of deaths has increased by 60% and was 41 human.

On 26 January, if you believe the BBC, became known, that has infected more than two thousand people, dead 56. The virus spreads quickly, than manifest its symptoms. Wuhan city (12 million people), became the epicenter of the disease, Chinese authorities blocked from the outside world. In several other cities in China introduced bans and restrictions on the movement of.

Geographical spread of the disease is quite revealing: Wuhan City in Hubei Province is the de facto center of China. In second place after the Wuhan recorded incidents of coronavirus - densely populated coastal Zhejiang. The total population of the two provinces is about 100 million people; at a density of population increases the danger of the epidemic.

According to official data, source of the virus was a local seafood market (it was closed 1 January), which sold and other foodstuffs.

And that's what it should be noted especially. Recently, Wuhan launched National biolaboratoriya, which conducted experiments with pathogens. Its discovery was one of the steps in the opening of China to the 2025 year from five to seven laboratories Level 4 Biosafety (BSL-4). In total there are in the world 56 this kind of laboratories. It is believed, that the appearance of such laboratories is equivalent to acceptance of the elite club of countries, are engaged in virology at a high level.

Toth coronavirus, outbreak which spread occurred, It refers to the third level of security. Many Western media recall virus leak 2004 g. (outbreak of the viral disease claimed the life time 774 human), but today the situation is more complex and confusing.

Official data on patents for coronavirus strain contained in the database, which indicates, coronavirus that can be used as a vaccine for the treatment or prevention of diseases, such as infectious bronchitis. The owner and the manufacturer of this strain appears Institute Pirdbrayta (United Kingdom), also has samples of swine flu and other dangerous viruses. According to official data, funds for its activities the Institute receives from the Research Council in biotechnology and biology, and it begins with the story 1914 city, when the station was created for testing tuberculosis.

The Institute has contacts with various organizations in the United States. for example, Bill Gates and Melinda funded the creation of antibodies fund. significantly, what, Although the Institute - UK, patent for coronavirus belongs to Americans.

Some media wrote, that the prevention of an outbreak of coronavirus has been done yet in the three months prior to the. In support are fragments of the interview with Eric Toner of the Health Security Center Johns Hopkins (USA). Here again emerges the Gates Foundation - that he, together with the World Economic Forum (Davos) Health and Safety Center, John Hopkins were the organizers of the exercise on epidemic modeling; These exercises were held in New York City 18 October 2019 g. called Event 201.

Scenario, resulting simulation, looks, without exaggeration, zloveshtim: a new virus can penetrate six months on all continents and in over 18 month strike 65 million people in different countries. According to the Health Security Center Johns Hopkins, no modern vaccine will not be able to win a new virus, it threatens to be more deadly, than the severe acute respiratory syndrome, known as SARS or purple death.

Wuhan laboratory featured in a special report on 2019 g. Control Center and Prevention of the United States of diseases, where it is characterized as a modern and reliable center with world-class specialists. However, there is another question: how safe American biolaboratory, created in post-Soviet countries? to what extent, finally, open research data and various Pirdbrayta projects of the Institute and its American counterparts? These questions need immediate answers.