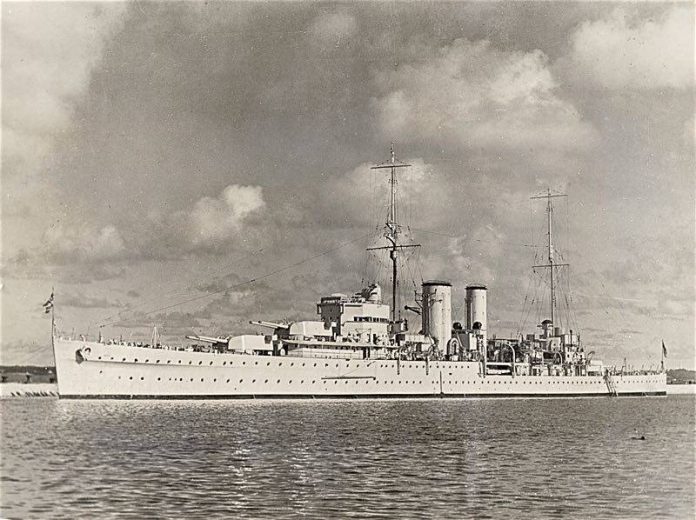 Talked in the previous article on the Deutschlands, including the “Admiral Count Spee”, Now let's move on to his opponent by battle at the mouth of La Plata. Our character today is heavy cruiser type "York". Mostly about Exeter, since the York really won back.

Type "York" well, it is very noteworthy that, that it is ambiguous in full. With whom they just did not try to compare, but I will express my personal opinion, it was not really heavy cruisers, rather, light heavy.

At all, there was an impression, that cruisers were built according to the residual principle. That is, the tonnage and money limit was left for one and a half normal cruisers, and the British had a choice: one normal heavy cruiser or two don't understand what. Obviously, the Admiralty chose the quantity to the detriment of quality, and the output is York. 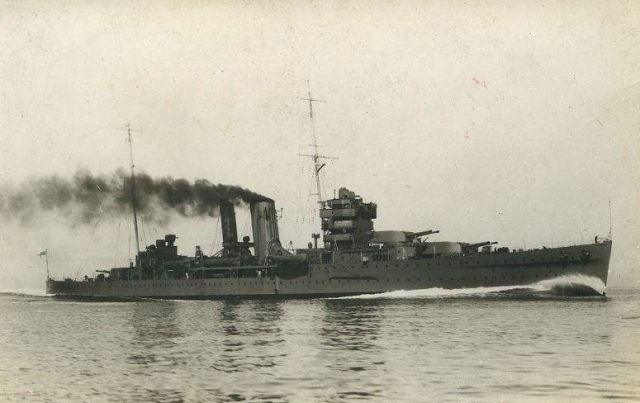 After the construction of the County series, the York couple looked like it was made under the motto “save on everything”!»

Savings can be seen in any photo. They just took and removed one main caliber tower. There was a lot more, but six guns instead of eight - this is the main difference from the "County". Together, of course, low combat power. 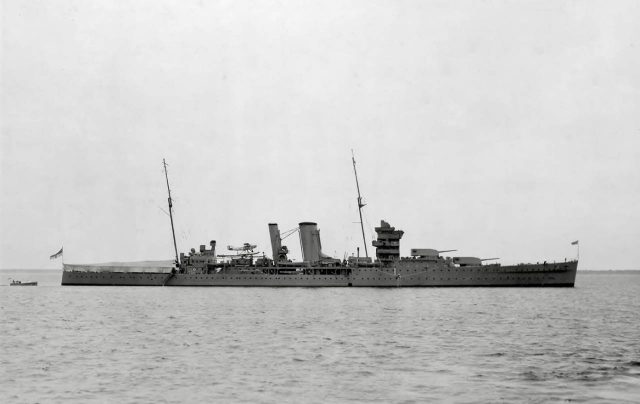 In general, offensive nicknames such as "mini-Washington", Light heavy, "Small heavy" was, but all in essence. After all, the displacement was also lower than allowed 10 thousand tons.

Some authors of the Yorks are usually compared with the Deutschlands or Myoko., this was on our pages. Well, you can only express bewilderment, because six 203 mm trunks against six German 283 mm or ten Japanese 203 mm well, it's just silly.

If you compare, so with ships like the Japanese Furutaki or the Argentine Almirante Brown. Here they are really comparable. And as the battle at La Plata showed, Exeter for Spee was just a target. But we will return to the results of the battle.

Conceived to build a Yorkie back in 1925 year. Initially, the construction of a series of 7 cruisers, but not enough money, and 1930 the year the London Sea Treaty was concluded, and it turned out so, that the UK’s displacement limit for heavy cruisers has already been used up.

The rest of the limit and went on to create two light heavy cruisers, who generally went down in history as the last two British cruisers, armed with 203 mm guns.

Despite, that the ships were of the same type, they differed outwardly. apparently, this can only be explained by, almost a year and a half passed between the laying of ships, and the fashion has changed a bit.

But the ships can be easily distinguished by such an essential detail, like the slope of chimneys. At York, they are tilted, and Exeter was built with straight pipes.

Let's look at the ships in terms of numbers. But it’s even better to do this with an example, so that anyone can make sure that, what to compare Yorkie with Myoko or Deutschlands to say the least, not fair.

Our Kirov was inserted specifically there, because he is also a ship with oddities, just like the Deutschelands. But mostly most sources consider him a light cruiser, Besides, perhaps, Marshall, which numbers Kirov and all the rest of the projects 26 and 26 bis in heavy.

And you can’t say, which is not without reason. Hard to tell, who who, happened the meeting of "Kirov" and "Exeter".

but the fact, that against the background of real heavy cruisers, our defendants look a little weak. So “light heavy” is still a completely normal characteristic. "Not heavy" is just for York, “Lightweight” is about “Kirov”.

Still, the light / heavy difference is not only in the caliber of the guns (and where, again, “Kirov” put on his 180 mm), must be watched in conjunction with other characteristics.

Did not enter anti-aircraft weapons in the table, since this is a variable component.

In general, the rating of anti-aircraft artillery is unsatisfactory, what, properly, and brought the Yorks to the handle in a sense.

Exeter differed from York in body width, it was a foot wider (0,3048 m), a new type of superstructure tower form, straight masts and pipes, number of seaplanes and catapults for them (Exeter had 2 and 2 respectively, York has one plane and one catapult).

The superstructure of this tower type on the Exeter subsequently became the standard for British cruisers, being a very useful invention. It reduced the silhouette and significantly reduced the influence of powder gases when firing the bow caliber of the main caliber and smoke from the pipes.

The main caliber was not bad, as, however, all british naval artillery. Of course, six 203 mm guns is not eight, but what was - was. And there were six 203-mm guns Vickers BL MkVIII sample 1923 year with a barrel 50 calibers and mass 17,19 tonnes.

The average rate of fire was 3-4 shots per minute, maximum - five. Tower installations provided guns with an elevation angle of 70 ° for firing as above surface, and air targets. In theory. In practice, firing at aerial targets was found to be ineffective due to the frankly low rate of fire of the guns and the slow drive of turning the towers.

Reservation of the Yorks was made on the principle of "All or Nothing" and covered only the vital parts of the ship. Armor of the walls of artillery towers, as well as their barbets had a thickness 25 mm, armored traverses of towers - 76 mm, side traverses of the cellars of all the towers of the Civil Code - 111 mm.

Basically, from the predecessors of the "County" ships differed slightly in all characteristics, except weapons and reservations. They frankly saved on them, because, properly, and the combat service of the ships was not very long. 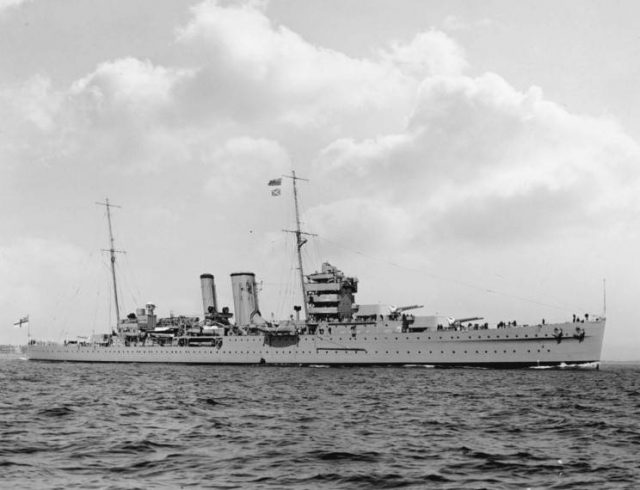 Started service in 1930 year, at 1939 started serious work, participated in posting convoys. AT 1940 took part in the invasion of Norway, the damaged Luftwaffe destroyer Eclipse was towed from there, evacuated troops from Namsos, when the Germans won the battle for Norway.

Further participated in all operations of British ships in the Mediterranean, covered up the convoys, covered aircraft carrier "Illastries", whose planes carried the Italian fleet in the harbor of Taranto, ferried troops to Greece, escorted escorts to Egypt.

In general - the ordinary life of a cruiser.

But 26 Martha 1941 years to Souda Bay in Crete, where was "York" in the company of other ships, dashing guys from the 10th flotilla MAS of the Italian Navy. These were saboteurs, using MTM boat mines. 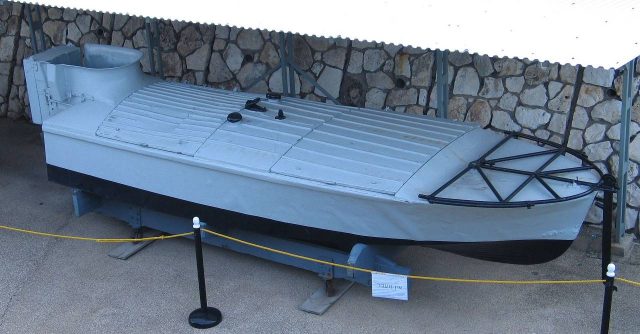 Boat MTM (Modified Tourism Motorboat) carried a charge in 300 kg explosive with hydrostatic shock fuse. MTM developing decent speed in 24 the knot breaks when it hits the target and begins to sink, then at a certain depth (below the armor belt) the fuse was triggered by hydrostatic pressure and the main charge was detonated, leading to the formation of large holes in the underwater part of the enemy ship.

The pilot left the boat some time before the explosion., previously aiming it at the target. He should have managed to climb a special life raft, to avoid death from hydrodynamic shock during the explosion of the boat.

And two of these boats chose York as their target.. The cruiser could not stand the blow and was stranded. The engine room was flooded and the ship was left without energy. While there was talk about, where and how it will be better to repair, the submarine "Rover" was moored to the board of the cruiser, to supply electricity from it in order, so that the cruiser’s guns could be used in the air defense system. 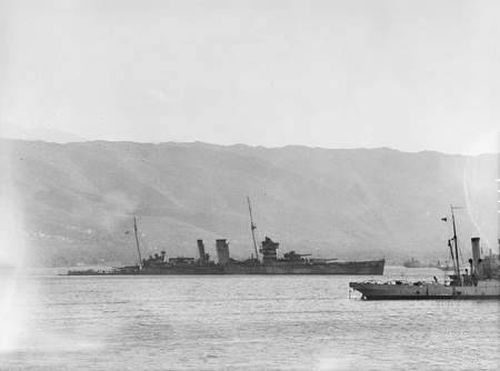 «York» aground in the harbor

Alas, but then the Luftwaffe got down to business. And first the bomb damaged the Rover and the boat had to be dragged for repairs.

A 18 May, taking advantage of, that the cruiser could only fight off machine guns, the brave guys from the Luftwaffe butchered it like cod. As a result, the British military leaving Crete 22 May just blew up the towers of the cruiser and threw it in the bay. 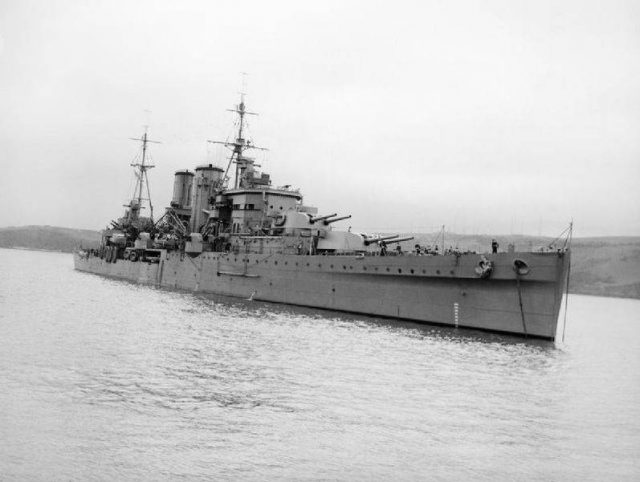 Beginning with 1931 years, the cruiser was in service, taking part in exercises, parades and hiking. In April 1939 was sent to the South Atlantic along with the cruiser Ajax.

In October 1939 was assigned to hunter group G along with the Cumberland and Ajax cruisers to search for the admiral Count Spee’s ship in the South Atlantic. Later, the cruiser Achilles joined the patrol..

Exeter took the brunt of the German raider. Hard to say, how would his fate be decided then, if “Ajax” and “Achilles” obeying Harwood’s order would not launch a suicidal and arrogant attack. 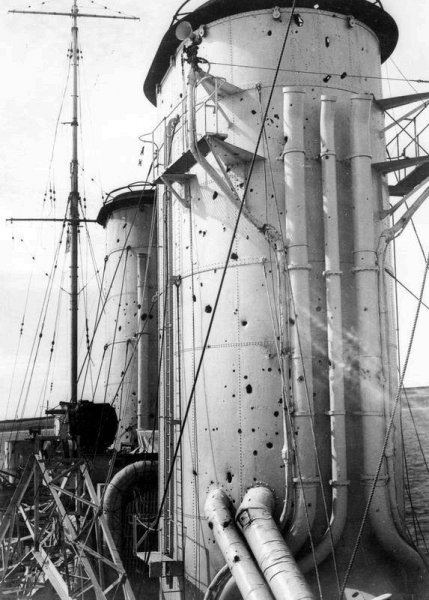 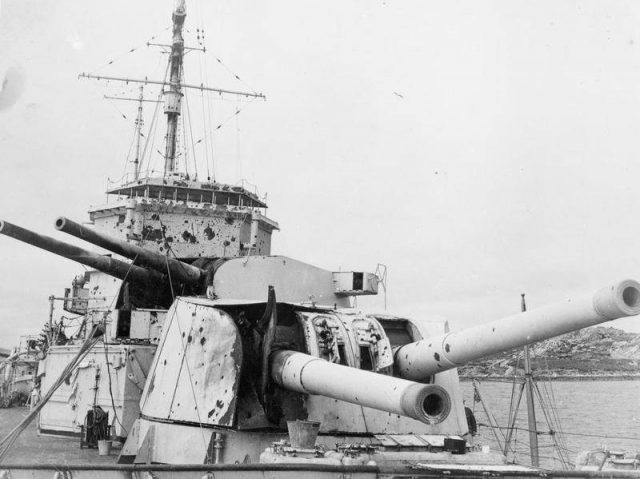 As a result, Spee was pounded and locked in Montevideo., where safely self-sawed, and Exeter managed to crawl to the Falklands. 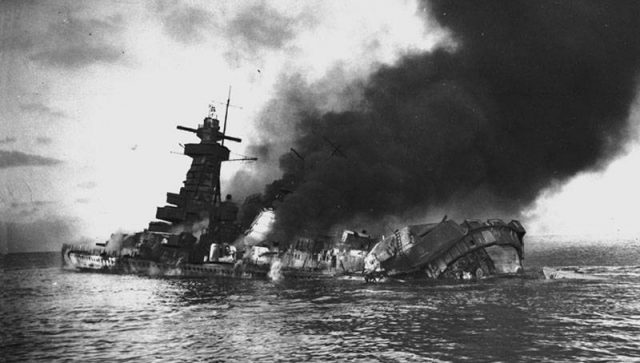 There, inspecting cruiser damage, all (and crew, and base staff) very surprised, that he generally kept afloat and reached the base. The Germans beat the cruiser so, what would be worth giving them their due. So the boat was not super, that's for sure, but turned out to be very tenacious for verification. Take goodies in caliber 283 mm - it's still not so simple, as it seems.

Nevertheless, Exeter fought until then, while water, that entered through the holes did not short the wiring and did not leave the rotation mechanisms of the guns without energy. Plus a cruel fire flared on the cruiser.

После ремонта в 1941 году «Эксетер» был отправлен в Индийский океан, where he was engaged in routine cruising work as part of the US-British-Dutch squad of ships. 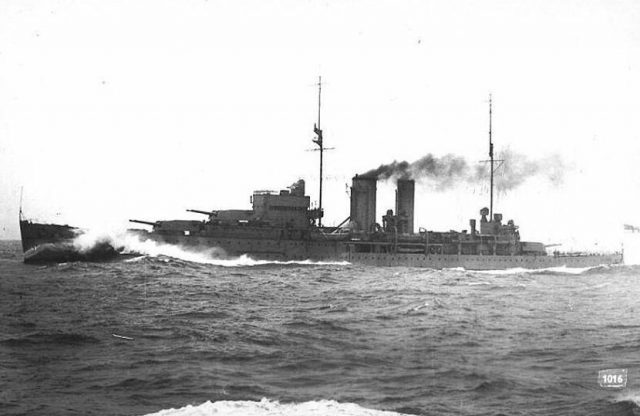 27 February 1942 years took part in the First battle in the Java Sea. 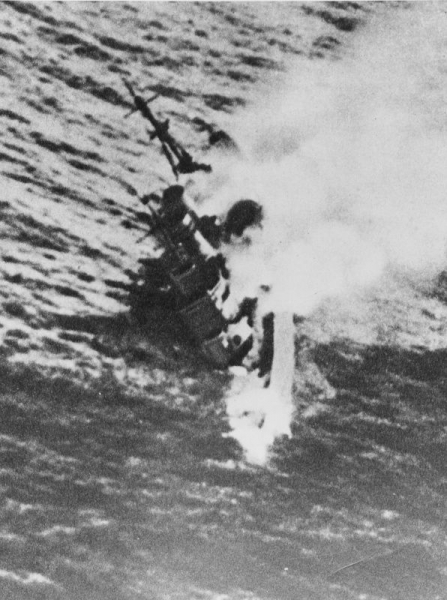 What can be said in the end?

Greed is punishable and the desire to save does not always lead to the expected result..

Today it is very difficult to understand the logic of the Lords of the Admiralty of Great Britain, ordering these ships. Для морской державы первого ранга смысл обладания такими уцененными крейсерами не очевиден.

What tasks could such "light heavy" cruisers solve for Britain, I do not understand. If we talk about frightening the colonies, then lung guns would be quite enough for this, the so-called "colonial" cruisers.

And if you take real opponents, which were Italian, German and Japanese heavy cruisers, here "Yorkies" were completely not competitive. Not enough armor in the first place, and secondly firepower. 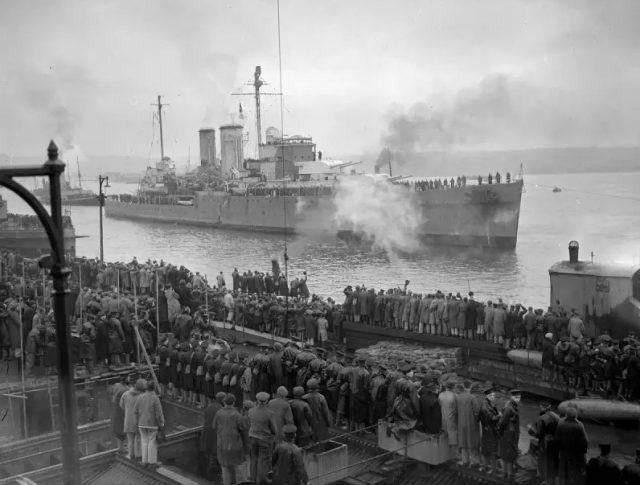 And if the meeting with the lone German raider Exeter was somehow able to survive, then Japanese “Myoko" in the amount of more than one turned out to be fatal for the "light heavy" cruiser.

Strange project. One could spit on all contracts, good thing went to war, and build normal ships, not frank stubs. But - what has been done, that's done, and it turned out, what happened.

Eventually «York» and «Exeter» became the last heavy cruisers, built in the UK, and ended their century, as befits cruisers, in battle.

Articles What is the life of a mercenary?
Subscribe to Newsletter