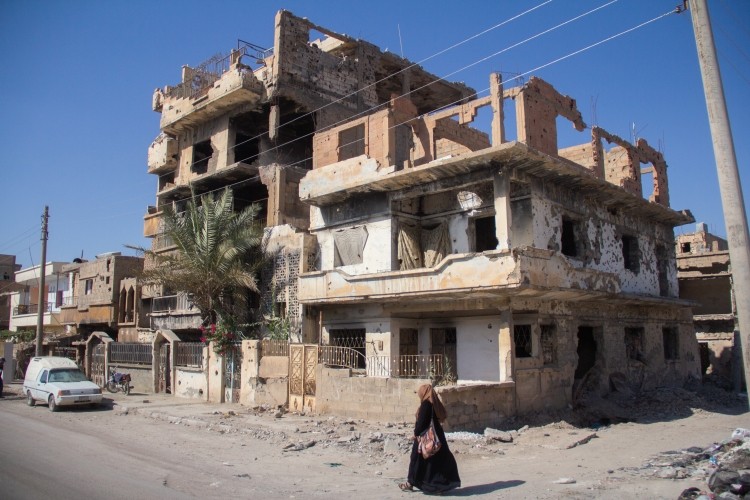 Journalists from the Russian military escorts first arrived in the former capital of the Russian Federation banned groups LIH - Raqqa city in the same province.

Despite, that in the central square adorned the inscription «I love Rakka», from the city virtually nothing left. terrorists IG1 (banned in Russia) They took him in 2013 year. no less 250 thousands of people were forced to flee the city in other Syrian provinces and abroad, fleeing from gunmen. AT 2014 Raqqa year proclaimed capital of the "Islamic state" 1. autumn 2017 , the US-led international coalition announced the beginning of the operation to free Raqqa. During her residential fund of the city was destroyed by 80%.

Even before the war in Raqqa grown-third of the Syrian wheat. Currently, the largest grain elevator in the city is in ruins. Venture for the production of sugar and concrete and processing of cereals completely destroyed. people, that remain in, have difficulties with work and power. On the main road has already opened the first store, but there are almost no buyers. People gather there, where they sell bread, cheap food and second-hand clothes.

We are tired of living in this dump, in which our city has become. I have a lot of children - they all want to live in peace, - told a local resident Aisha.

Besides, live in Raqqa still very dangerous, because the militants hiding in the vicinity. Many places are mined. Basically, they are undermined by local Syrians. According to official data, over the last year in the city killed 119 human.

One of the locals told reporters Omar, people are afraid to walk the streets, pointing to the grenade lying on the ground. According to him, such munitions can be found everywhere, no one cleans. Besides, cleaned neighborhoods absolutely pointless, as there is no lighting and roadblocks, said Omar.

Police and military forces of the Syrian democratic (Kurdish SDF), in Sunni areas, inhabited by Arabs, after a series of attacks to call fear, - he said.

The situation is much more complicated after, both were destroyed bridges across the Euphrates. Local are unable to get to the other side of their relatives. Ferry ride is worth one US dollar, Syrians is very prohibitive amount. The Russian military has conducted several humanitarian actions in this province. At the moment, they see an opportunity to help in the reconstruction of infrastructure, writes RIA Novosti.