Instead of scissors and knives: bullet against the wire 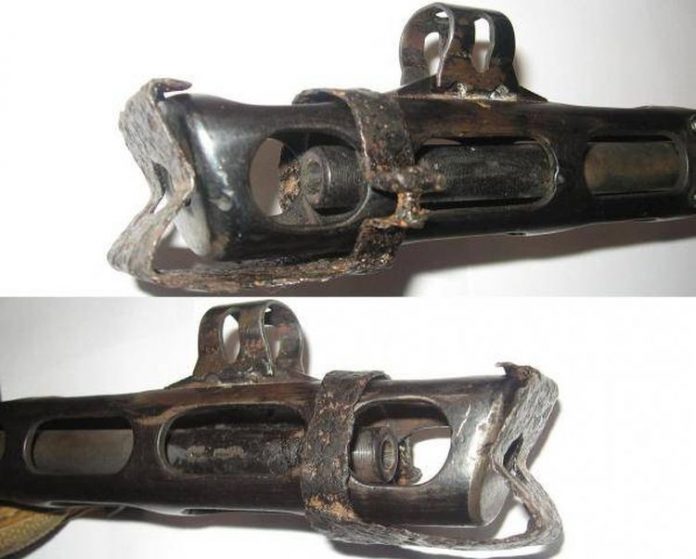 Despite the development of armies, engineering and technology, During the Great Patriotic War, the barbed wire remained a serious problem for the troops. special tool could be required to overcome them, It is not always easy and convenient to handle.

AT 1943 by enthusiasts of the troops came up and introduced the original device for controlling the wire. It perfectly fulfills its function, It had a very simple structure and is actually integrated into the staff weapon.

Long before the beginning of the Great Patriotic War, the Red Army was created and adopted on the supply of various means of dealing with barbed wire. First of all, it was a pair of scissors and cutters are several types. Besides, in some situations, the wire offers not cut, and raise with a special slingshot. Finally, as a means to deal with the wire could speak any armored vehicle.

Infantry means to overcome barriers often do not differ by small size and weight, making it difficult for them to carry and use in a combat situation. In view of these various alternatives. Some of them received widespread. 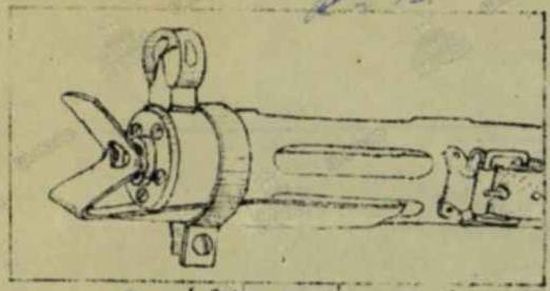 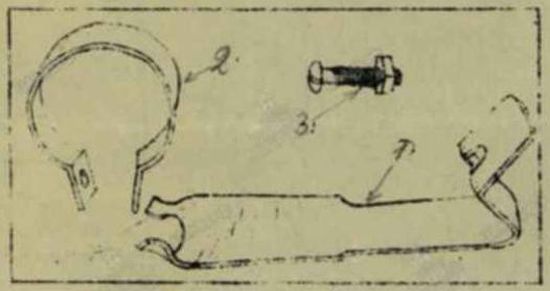 In summer 1943 g. its version of the engineering tools offered Guard engineer Captain SM. Frolov of the 2nd Guards Brigade Engineering Task. Documents for new development went higher command for review. In August of 1943 took the test the new device, the results of which it has received high praise.

Bullet against the wire

The main idea of ​​the project SM. Frolov was to create a means for cutting the wire on the basis of standard weapons infantryman. Instead of separate scissors or other devices soldier offered to carry submachine gun with a small additional device. Recently designated as "a device for interrupting the wire".

In earlier documents the project described device design for installation on a sub-machine gun PPD. In this case, the device consisted of a clamp with screw and nut, and a metal strap with a hole, curved in a «V». With the tabs at the back of strip was mounted under the cover of the barrel and fixed to its place clamp. After that, before the muzzle of the gun was provided with a curved portion strap hole. 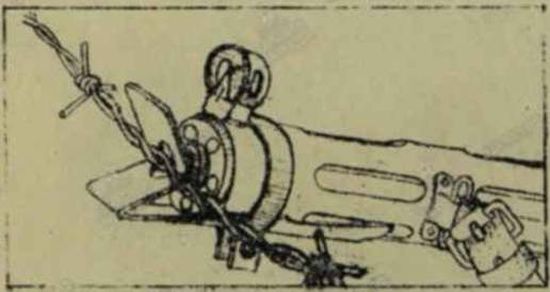 The simplest design can be adapted for use in other weapons. To this should change the shape of parts, taking into account contours submachine gun. It was to remain unchanged only the front curved plate with a hole.

The operating principle of devices was simple enough. The wire should be placed in a V-shaped part of the strap, whereby it is provided near the muzzle of the muzzle. Then required to make a shot, and a bullet interrupted wire. If necessary, the device allowing noiseless lift boom elements at a small height.

According to test results

In August 1943 g. Engineering Committee has made prototypes of the original fixtures and tested them on real barbed wire. The audit showed high efficiency products. Besides, a good estimate of the construct itself, characterized by simplicity and adaptability. 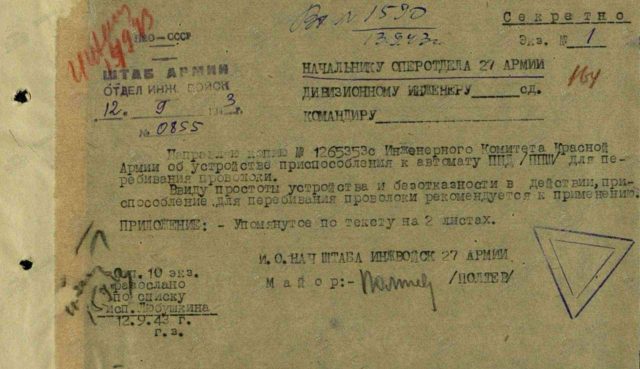 It was found, that the device design engineer Captain Frolov's really capable of providing cutting wire from the fence. bullets lacked the power to guarantee the heckling stranded barbed wire. Besides, efficacy was equally high regardless of the wire tension.

The adaptation was very simple and could be manufactured and mounted on the gun shops army forces. Also appreciated the opportunity to command the construction of adaptation for use on different types of weapons. As a result, the proposal SM. Frolov was approved, and in September 1943 a device for interrupting the wire recommended for use in the armed forces.

Simple documentation began to circulate among the military workshops on the original device. They were required to provide a sufficient number of soldiers devices. They should make available materials - this was due to the absence of specific requirements for raw materials, or characteristics. 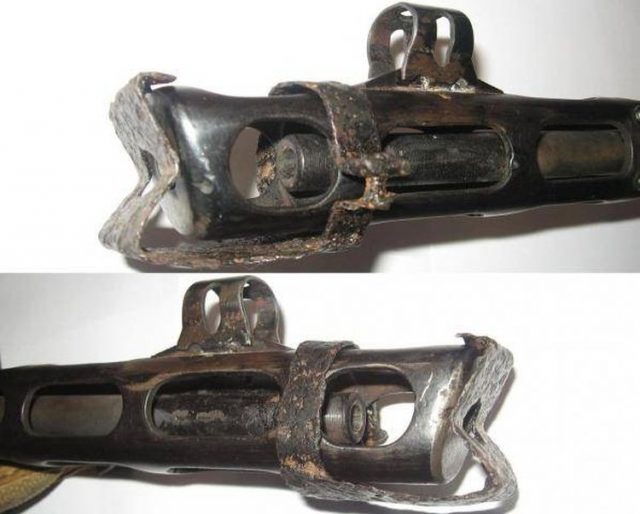 A simplified version of the product at the PCA

There is evidence of small-lot production of Frolov's Device for submachine guns PPD and PCA. Apparently, each individual workshop made only devices, which were consistent with the weapons parts. Due to the nature of arms of the Red Army at that time, bulk devices intended for PCA.

As devices release their structure refinement was carried out. In particular, Two known devices of simplified options for PCA. They have some differences from the base product and from each other, associated with the peculiarities of weapons design and technological capabilities workshops.

The project SM. Frolov proposed adaptation of the strap and clip. In military workshops they are often performed in a single sheet metal part. Also, the device may only consist of curved strips, simply welded to the barrel casing. In fact, it was necessary to save a curved part to the muzzle, while other elements could be of any shape and size. 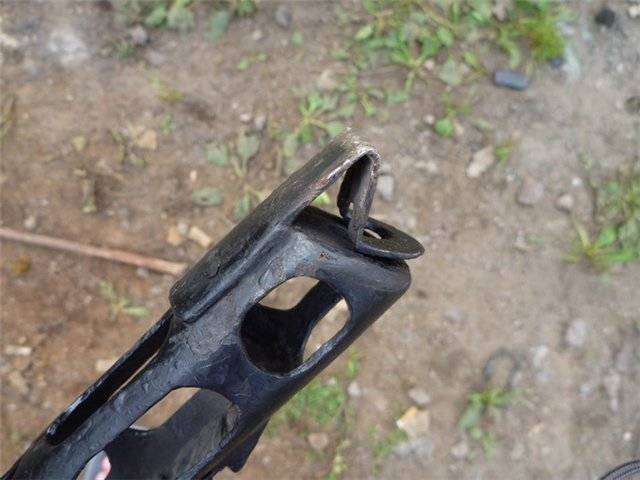 Extremely simplified version — just strap is welded to the casing

As far as, means for interrupting the wire under the sub-machine guns were made in significant quantities and mass mounted on a weapon. However, production rates were limited and were not allowed to re-equip all available weapons. As a result, only a few percent PPD and PCA have standard tools to deal with the wire.

Despite the small number of, means for interrupting wire preserved and made available to interested. Several weapons from such equipment is stored in the domestic and foreign museums. Besides, sub-machine guns with options from time to time be in place battle. However, in its number of such specimens is seriously inferior arms in the base set.

Due to the limited capacity of the workshops, and due to the limited needs of the troops Frolov device and its derivatives are produced in relatively small quantities and is not installed on all infantry weapons. However, samples made perfectly cope with the work and provide overcoming obstacles enemy. With their help, you can quietly raise wire or quickly and noisily dig it.

Due to the limited number of Frolov's device was not able to put significant pressure on the scissors and other tools, but perfectly complement their. Red Army was simple to make and use tools to solve is not the most prominent, but important task and use it effectively to end the war.