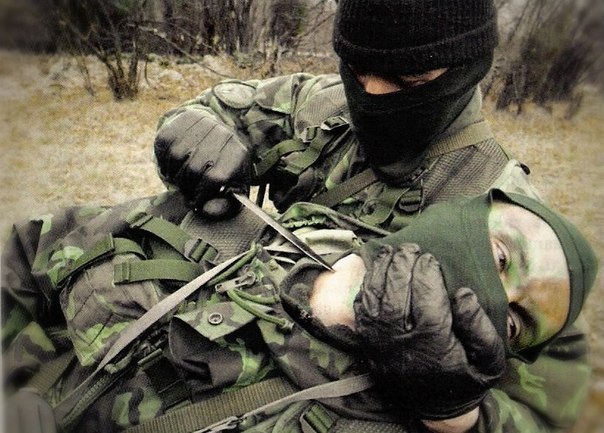 psycho-Physical exercises – these are exercises, who train the mind and at the same time a person develops physically. They are a set of techniques and actions, performed in high-risk (risk) and associated with significant physical and mental stress. On physical performance in combat conditions greatly affects the mental factor. The following tests were conducted Airborne.

At first fighter marched passed by the general board, lying on the ground. the passage of time to pinpoint. Then the soldier took place on the same board, but at the height of 5 m. At the height of the time spent on the passage of the board has a much longer. The height of the pressure on the psyche and speed is lost, since fear prevents the speed of the exercise. This is confirmed by other tests: at the same altitude fighter doing flexibility exercises and strength, jumping. Their result was lower, than when performing exercises on the ground. All of these tests have shown: the stronger fighter mentally, the better his physical performance. And vice versa.

Therefore, in all classes of physical training exercises should be used to train the mind, the implementation of which is associated with danger and risk. Thank them, fighter learns to conquer fear in the most difficult moments for him.

fear – This protective function of the organism. This is a signal of danger. Left-Danish, no fear, in exploration unfit. fear – jewel, if a fighter is able to possess it. All scary skydive for the first time. This is normal. it – congenital, salutary fear of heights. But if you give in to fear, then begin with a man do such miracles – Then he surprised. The body comes out of the subordination: dizzy, hands are shaking, man pours a cold sweat, and so cling to the railing parachute tower, that it is impossible to detach the fingers. Fear makes a man impotent. And you can learn to control fear. And as in all learning, the main thing – gradualness. First soldier taught jump with two feet, then the height of each exercise increases. Man does not cease to be afraid of, but fear of them not more than Mr.. He only warns about the danger of a fighter, It helps him to make quick decisions.

All exercises, All training must work on one goal: be assured that you are stronger than your own fear. Unlimited possibilities of man, if he wins fear.

Or take a mountain training. The purpose of the mountain training simple – give the fighter the opportunity to psychologically adapt to altitude, check and increase their opportunities. In the mountains, it turns out who is who. On steep slopes descend puzzling psychologically harder, than to climb up. With unaccustomed scary move backwards or downwards, looking for foot support, that either you endure, whether there. He looks back over his shoulder and a bottomless abyss, It seems a magnet pulls down to its depth. Of course, quickly learn first climbers, climbers, them as they say «God himself told». And behind them all the, who has experience of wrestling, for whom the risk, passion, full pressure – not empty words.

Without habits of people height and then freezes on a steep slope, like a beetle impaled on a pin. Where he was to fight, But any victory over the enemy starts with a victory over himself, over his weakness and doubts. We must start from the, that put men on the precipice, on the edge. Initially, newcomers simply numb with horror. afraid to move, move. But a person has a lovely property – he can not live long in fear. Here's one whistle, the other began to share experiences, He reached the third to give something to someone… On these grounds the commander feels: people came to their senses completely. The first step has been taken, You can go on «run-in» height: boost the steep slopes (on the basis of the steeper, all the better), develop climbing skills. It is necessary to constantly teach scouts to overcome fear, inhibit survival instinct. This is achieved by targeted outreach and training, during which it is necessary to combine exercise for physical training intensified complexity (transitions on a rope over an abyss, etc.) with elements of tactical and fire preparations. In addition to overcoming the obstacles and barriers under fire «the enemy», and sudden meetings with him, It should be widely practiced techniques, audacity in raising intelligence actions – such as sudden attacks on important targets (Staff of the, communication centers, launchers for missiles, etc.).

RDG routes should be chosen in the furnace and impassable areas (swamp, dense forest, the mountains, water barriers, placing them minefields, mines – trap and «surprises». At the same time the scouts must fulfill the task of survival: Overnight in the open field, in the forest, cooking of native vegetation, venison and fowl, to disguise his movements, long stay motionless in one position under the scorching sun, in the rain and in the cold. In the education of psychological stability of the main efforts should be directed at, that any surprise to the scouts have become familiar. To surprise became the rule, surprise – zakonomernostyu, a sudden change in the situation – commonplace.

A sample set of some psychophysical nature of the exercises:

– «risk strip», a portion of which is overcome by the actual fire from small arms;

– Ferry swim on improvised means through a water barrier with a rapid current;

– secretive movement on difficult terrain with a fair solution of tactical problems;

– crossing on a rope across a river or a mountain pass in full combat gear;

– swimming in uniform and with weapons;

– diving to a depth of 3 m and freeing it from the weapons and equipment;

– diving into water from a height 3 m with a gun and blindfolded;

– dogfight with two or three opponents;

– ski training combination with elements of survival: march over rough terrain with shooting on 2 – 3-s borders and orienteering with map and compass;

– biases and evasions of flying in combat knife fighter;

– adaptation to cuts, sight of blood and to the wounding of a living creature;

– special exercise: catch a live hare loop, kill an animal hit his head on a tree, tie the hind legs, quickly cut off his head and holding his breath drink pouring blood, then exhale;

– visit morgues, to the observation of an autopsy;

(The nature of obstacles must comply with the studied theater of war). An experienced special forces officer, Sergei Kozlov shares his methods of psychophysical training of scouts:

« …We were made stuffed – dummy, They dressed him in an old form of hopping, cut styled field uniform clothing US Army, hid in his breast pocket a document. After this abundantly watered with blood mannequin, and unbuttoned jacket placed guts and other entrails. All bloody paraphernalia borrowed from stray dogs. Here is a «corpse» and had scouts scour. Need to say, that not everyone is able to simply messing about in a bloody mess intestines, but to overcome this psychological barrier is a must. It is equally important to educate the willingness of subordinates to kill the enemy by any of the methods studied, to which may also be useful stray dog. Psychologically very hard «bang» bottom that no reason innocent creature, but it is much harder to break itself to make the killing of civilians, if necessary, Accidentally discovered a group behind enemy lines. but, if you do not, it is quite clear that a resident will give a group of enemy. Many of the soldiers were not able to see even the murder scene. I remember, in March 1984 , we flew on one of our first «overflights». After the collision with the enemy, I decided to finish with a knife after the search seriously wounded «spirit». At the sight of this soldier Maksudyan almost fell into a swoon. A fighter that did not pass the selection in the Union, and certainly not preparing the program of psychological stability. A little later, because it almost killed the entire group. When it emerged rebel group, committed a detour, He and his partner Mammadov abandoned their positions and fled.

Many will argue about the killing of stray dogs. For, to the murder was not purposeless, you can work out another education element of psychological stability. Dog meat is quite edible, and at the field exit is possible to prepare a meat dish of dog – but not everyone can eat this dish. overcoming disgust – It is also an important issue for survival in extreme conditions. To survive and continue to perform the task, soldiers in peace must learn to eat all, including insects, frogs and snakes.

among people, of such trainees, significantly lower than the percentage of exposed post-war syndrome. people are, not ready for strong pressure in the form of deprivation, the death of comrades and the need to kill for, not to be killed by the, often become patients neuropsychiatric dispensaries, or fall into the corrective labor institutions».