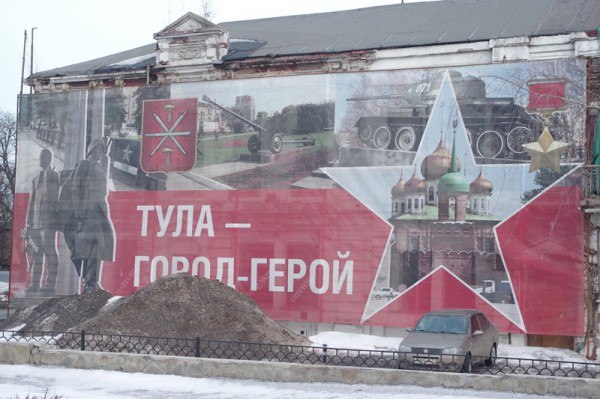 By the end 1941 the German troops were advancing on Moscow in order to save the Bucs pretty Barbarossa. They sought to capture the Soviet capital from the south. But here on their way stood the ancient Russian city of Tula.

Offensive operation was launched on his capture 24 October powerful attack of the 2nd Panzer Group Guderian in conjunction with the 2nd Army von Weichs. Just five days it took the Germans, in order to approach the outskirts of the city. Here is the Defense of the 50th Army, Only recently selected from the environment. In addition to her defense held the 3rd Army Kreizer, urban military garrison and a few pieces of militias. Due to the civilian population on the perimeter of the city were built three lines of defense.

At first, with the help of massive tank support the Germans tried to capture the city on the move. Because the main forces of the 50th Army had not yet arrived and positioned, critical situation has been created. The initial impact of the German troops with great loss was recognized city garrison composition together with the militias Tula working regiment and the 69th brigade of the NKVD. But by the evening 30 October 32th Tank Brigade was sent to them to help. The next day, we tightened and parts of the 50th Army, which led to a division of jet «katyush».

Battle of Tula were very bitter. Totally agree 30 October defenders of the city repulsed 4 tank attack, which were attended by 20 to 50 tanks and some infantry battalion. The small attacks with three to five tanks and a platoon of infantry was just countless. Only to the second position in November of Tula region has stabilized. At this point the German losses amounted to 38 tanks and about 500 Marines. On our side it was destroyed 3 tank and 3 gun. Of personnel units 84 people were killed and about 200 wounded.

Not expecting such resistance the Germans simply confused. Their offensive was resumed only 18 November. This time they decided to get around the city from the flanks and take it «pliers». Pulling up a reserve and spent regrouping, the enemy has created a threefold numerical superiority. As a result, the Germans managed to break through the defenses of the 50th Army and the bypass Tula from the south-east side. Trying to build on the success, 17-Panzer Nazis continued to advance and was able to get to the southern approaches to Kashira. However, after the near Serpukhov in the fight entered 112th Soviet Tank Division with the 2nd Cavalry Corps, enemy troops were driven back to the area Mordves. But, Despite this, east Germans swept deep city.

In order to close the encirclement, 27 November 43rd Army Corps, the Germans had struck near Alexina. They were quickly pushed forward two divisions from the Second Panzer Army. Some time later, Tula still was encircled, but not for long. Red Army troops, together with militia managed to unlock the city, with the result that the advancing German troops were scattered in an area of 350 km, and offensive reserves, stationed to the north of the city, all had to start on the defensive.

The outcome of the battle of Tula was a full stop advance of the German army to Moscow from the south. Despite wire enemy artillery and mortar shelling, the city was able to survive. The Red Army and of the militia disrupted the enemy plans to seize Moscow from the south. They chained themselves to a sufficiently large force of the enemy. In addition, it creates a lot of prerequisites for the counter-offensive, which was held. Its result was the complete elimination of the threat of Moscow from the south bypass.

The Red Army was recovering from the first defeat and began to fight.