Will the Russian "vacuum", to kill American "Abrams"

American magazine The National Interest worries about Russian tanks. They have shells, easily pierced the armor of any tank, but the guns for them is not enough. And that in fact?

And in fact it is, of course, miracle. Very excited someone Sebastien Roblin (Sébastien Roblin) on the pages of our favorite publications for the fate of our armored troops. Most of his care - MA in conflict resolution from Georgetown University, which he served as a lecturer at the University of the Peace Corps in China, and also worked in the field of education and accommodation of refugees in France and the United States.

And that's what informs this patented humanist. It turns out, "Russia has the bomb, which can kill the best tank of America ". But with him, there is one problem: He "does not fit inside most Russian tanks".

Wow! This is really a problem! With imagination. It is not enough, to imagine such a monstrous «Bullet», that «does not fit inside» of the whole tank! Of medium-range missiles are there, on 9th plant, shell were making?

There are shells - small guns!

No, Yet not so. It turns out, We have had problems with Russian missiles. AT 1991 year. During the Gulf War. And not in Russian. And the Iraqis. They have 26 February 1991 the American band of 9 tanks M1 "Abrams" and 12 combat vehicles, "Bradley" killed an entire armored brigade, during 23 destroying minutes 37 T-72, without losing any of his machines.

No, not remember Goebbels! It revealed, Iraqis still shot. But their Soviet missiles "could not penetrate the frontal armor" Abrams ". And generally speaking: "None of the M1 was not destroyed by enemy fire during the war".

That is, imagine this epic collapse of the power of the Soviet tank power?

But since then, Russian corrected. Today Russian tanks "are variants of the 125-mm smoothbore gun 2A46, which recharges the ammunition with a rotating mechanism "carousel" instead of charging the man ".

To her, it is just a hint at the "Abrams", where instead of initially feeding machine was provided, apparently, Negro, which will zashvyrivat charges in the gun.

However, not the case. Next humanistic minded author describes the modern anti-tank missiles, and then reports, that "today is considered, that "Abrams", "Leopard 2" and "Challenger 2" have the frontal armor, roughly equivalent 800 millimeters rolled homogeneous armor ". Eight hundred, remember? A "best armor-piercing projectiles Russia, compatible with a gun 2A46M, are 3BM59 "Lead-1" and 3BM60 "Lead-2", which "are designed to break through 650-750 mm 60-degree slant to armor combat average distance 2 km ».

Clear? There is nothing to be afraid of the Poles and other Romanians! Let lowered off the leash their armored horde and go to the Urals. Russian they still will not do anything!

But even this is not enough with these silly Russian. Their "Lead" projectiles penetrating rods are long penetrators 740 millimeters. A forklift on T-72 and T-80 "can accommodate the maximum size of the munition 640 millimeters "! 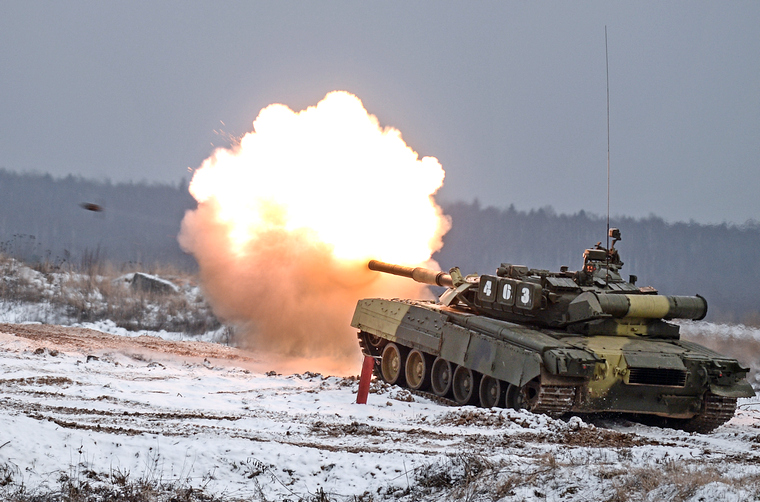 But still Russian engineers developed a "new huge 152-mm gun 2A83, intended to equip then develops tank "Armata" next generation of T-14, and improved 125-millimeter cannon 2A82, intended for the modernization of old T-72 and T-90 ". the problem is solved? Like fun!

Yes, 2A82 gun can use the new missiles 3BM69 "Vacuum 1" and 3BM70 "Vacuum 2" with extended 900-mm rod. And if, He writes the American author, the truth is, These missiles have a speed 2 kilometers per second and release 15 megajoules of energy, they will knock 900-1000 mm homogeneous armor at 2 km. This means, Russia received tank shell, which can reliably strike western main battle tank at an average distance.

But - again a problem! Gun 2A83 okazalas impractically large, and Russian vooruzhentsy decided to equip the "Armata" instrument 2A82. But they have been equipped with only one battalion of 36 T-14.

Consequently, suggests equipping guns 2A82 about two thousand standing at the Russian armed T-72 and approximately 800 T-80 and T-90. But then some "defense blogger Khlopotov", which refers to the opinion of the American, leaves and stones from these plans in stone. the main thing: "Russian engineers simply could not find an economical way to stuff forklift, capable of transferring almost meter shells "vacuum" in the close towers of old Russian tanks ".

No, Still, there is something from Goebbels ...

Generally, everything is bad. Katz offers to surrender. That is "Khlopotov accused of mismanagement of the Russian metallurgical industry".

conclusion magnificent: "In this way, while Russia can, finally, have a 125-millimeter shell, which may threaten Western main battle tanks, Only a handful of the new T-14 tanks able to actually use it. Optimistic statements, 2A82 gun that can be retrofitted to many T-90 and T-old 72, till, looks like, materialized ". 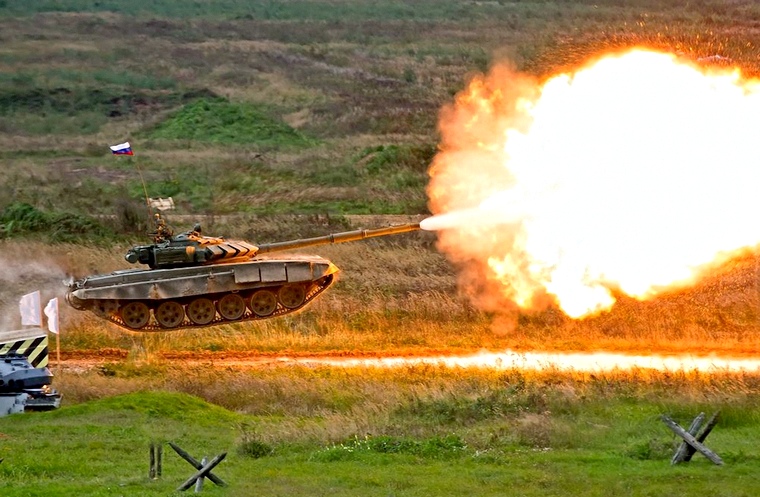 What a splendid half-truths! Or simply lie?

Such beauty angered even some of the literate readers The National Interest.

"You are welcome, Sebastien, stop writing this half-truth, it becomes commonplace ", - writes one eddy locker. and explains: evaluation of penetration "Lead" shells - a western evaluation 2016 of the year. And the latest information paints a different picture: «Lead-1" made of tungsten, It is the estimated penetration 700-740 mm. "Lead-2" is made of depleted uranium with punching 800-830 mm ". what, He writes the reader to the author, "According to your own words, It puts it into a hot spot for the Best Western Arms ". "It also casts doubt on the title and the agenda of your article", - not without venom adds commentator.

Military commentator as the "Komsomolskaya Pravda", Viktor Baranez just directly use the word "lie". "Here it is a laudatory article contains, so to speak, truth of the, as part of the lie ", - he said. Actually, According to the expert, in Russia does have missiles, burns through armor up to a meter. "Nobody believed, and it was true. And here the American magazine suddenly trying to say, that Russian are not able to apply them. He confused God's gift to the eggs', - stated Baranez.

As for the order, whether to shoot these projectiles T-72 tanks and - so because "now the defense industry is modernizing and 72, and T-90, so they put a gun, that could shoot the most of the "vacuum".

"We are in the process of transition, re-equipment of our outstanding tanks T-72 and T-90, we turn to the appropriate gun, which is capable of firing a projectile this miracle, which pierces the armor of this thickness, which is not able any more one shell in the world ", - summed up one of the most respected Russian military expert.

by the way, 2A82 cannon is the same from the very beginning considered for installation in the tank T-90, especially on the T-90M "Breakthrough". And this machine - upgraded T-90A, of which there are fall under the modernization 400 units. So that here an American author was somewhat ... well,, half-truth.