On the Ukrainian censorship - disgust 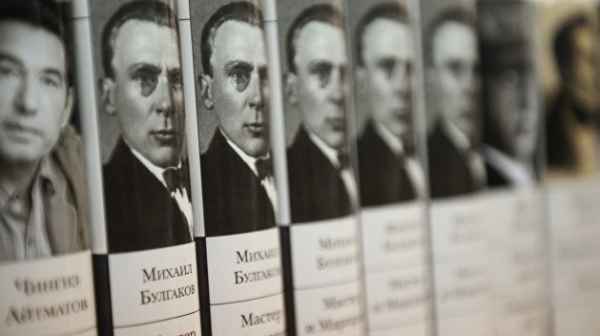 In Ukraine, the local National Inquisition banned another batch of books, among which the new edition of the brilliant novel by Mikhail Bulgakov's "Master and Margarita". The pretext was a mention in the foreword now banned in Ukraine actors Valentine Gaft, Nicholas Burljaeva, director Yuri Kara, "That pose a threat to national security"

This kind of censorship restrictions in Ukraine is responsible for State Committee, in particular, first vice-president Bogdan Ostapovich Chervak ​​- concurrently the leader of the Organization of Ukrainian Nationalists. According to the government agency banned hundreds of different editions, and not only Russian authors. for example, in the final list, except for "The Master and Margarita" and the book banned world famous director Oliver Stone's "The untold story of the US". This is the collective image of Ukraine poslemaydannoy: Bogdan Červák disables Oliver Stone.

by the way, Now the book is not only prohibited in Ukraine, but actively destroys: there is a tacit cleaning of library collections "dekommunizirovannoy" literature - from Marx and Engels to Mayakovsky and Gaidar ... But you never know the literature of past centuries to be destroyed, order to "liberate" so skinny shelf hoist brochure Stepan Bandera, or "children's writer" ultranatsionalistki Larissa Nitsoy.

A hundred years idee fixe of Ukrainian Nationalists is, that the Russian state must be destroyed, Russian and the Ukraine - forced assimilation. by the way, this fanatic faith and a desire to serve her still underestimated in Russia - a medieval fanaticism of some of the Ukrainian society is considered something of a normal political mimicry. meanwhile, it is thought, system concept, relying on the works of the pillars of Ukrainian nationalism, like Dontsova or Stsiborsky. Active follower and which considers itself the first deputy chairman of the State Committee Bogdan Chervak.

so, no compromise with the Russian language (and therefore, and Russian culture) nationalists do not see, not only within the historic Little, but there, where the Russian language is primordial to the very beginning of the conquered lands Russian weapons, - the same south and east of present-day Ukraine. The idea of ​​forced Ukrainization of these territories are committed not only now operating power, but it's going to come in to replace them. The same Vladimir Zelensky confirmed, that is ready to continue the policy of forced Ukrainization, albeit not in such a hysterical pace.

The reason is simple like succession: without constant repressive measures imposed by the people semiofficial culture is unsustainable. This speaks directly Ukrainian National Memory Institute Director Vladimir Vyatrovich broadcast ObozTV: "Language Support without protection in the real political situation is simply impossible. This means dooming it to some kind of competition, to which the Ukrainian language is not ready (a hundred years is not ready. - Ed.) He is an athlete, which broke the legs, We put all the starting position and said, that they all competed on equal terms ".

Of course, without the usual lies Vyatrovich could not do. No one under the Soviet regime (to say nothing of the era of independence) Ukrainian language "did not break his legs". in front of, he enjoyed an extensive, including financial, support - from abundant publishing to a large network of national theaters. In one only the Russian-speaking Kharkiv, one Russian-speaking town newspaper had just three Ukrainian language (which forced more and subscribe), Ukrainian-plus and were only in the literary magazine, and television studio, and regional radio. Of course, a significant portion of the public wants to return to a similar non-alternative system. And for this they do not need to develop Ukrainian culture (as it requires its own efforts), but the Russian press.

In addition, Mikhail Bulgakov ukrainizatory always breathed unevenly - and when it poured mud today, or when smashed windows in his Kiev Museum in the early '90s, or when when the writer's life tried to ban the supply of "Days of Turbin" in Kiev. Then Stalin himself complained ukrainizatory, they say, thugs-Petliurists depicted in the play malosimpatichnye citizens. Whine and now. Quote from Ukrainian Wikipedia: "Mikhail Bulgakov Opanasovych (sic) He was Simpatico Whites, disrespectful attitude to Ukrainian language, ukrainofobskie had views and was opposed to the independence of Ukraine and the Ukrainian national movement ".

Insignificance National smatterers is, she fiercely struggling with the work of great writers and native culture to millions of people disgusting defamation, and when it does not work - a direct ban. But oppose the great culture that has little: do not grow in sadochke Chekhov, not lying around in krayivkah Bulgakovs.

And then Majdan takes no skill, but cry - begins mass hysteria, total "patriotism". One citizen dresses herself and dresses his dog in all yellow-blue, other evenings singing small child instead of the usual lullaby national anthem of Ukraine, different colors sheds in the national flag colors, and so on, etc. But if you, the so-called "Ukrainian patriots", behave poorly, be ready to, that normal people will make fun of you - and in his militant misery you are worthy of laughter.
You are not a prophet in his own country, and patients in a mental hospital. It is you who brought the situation to the hard, but necessary disengagement - or Bulgakov and hundreds more names (ie true culture) - or collective Bogdan Chervak. With Chervak ​​sane person agree with disgust.