The United States decided to totally quarrel with the Arabs 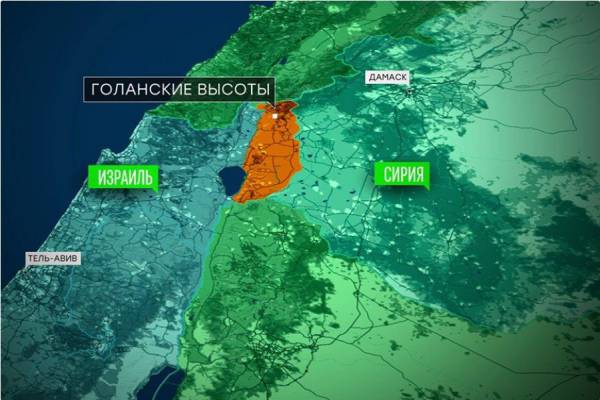 the, that he intends to make Donald Trump - more, what crime, this is mistake. He wants to earn the dubious title of the most pro-Israel president of the United States in the history of the North American State. This was with a deep sense of satisfaction reported by the press secretary of the White House Sarah Sanders. The owner of the Oval Office would recognize ... the famous Israeli Golan Heights.

Before this one has not been able to guess. The European Union has already stated, that still believes Golan Syrian territory. On the Arab countries and say no. Not find any, who agreed with the decision to Trump. And he's already recognized Jerusalem as Israel's capital. For States in this endeavor did not follow anybody. Do not follow in the judgment in the Golan.

Recall, it is pure occupied territory. Israel it was never. AT 1967 , Israel captured the land and since then keeps them. Recognize that they belong to the invader - it's like, that recognizes the legitimacy of any seizure. Here you have a fight with aggression. So much for the Ukrainian Crimea.

Crimea has always been Russian. Since the time of His Serene Highness Prince Potemkin Tauride. Later, after Khrushchev gave it to Ukraine, while he stayed as a part of Square. Now back home. And he returned a unanimous decision of the Crimean population. Is the Golan was a referendum on their membership?

After the decision on the Golan Heights Trump will continue to condemn us for the Crimea and to introduce all new sanctions? Presumably, What will happen. This is quite un-American. Leading monstrous war in Vietnam, they continued not to recognize our "occupation" of the Baltic states, capturing Grenada, they branded us for Afghanistan.

Only, who once expressed admiration for the decision Trump - this Israeli Prime Minister Benjamin Netanyahu. Well, It's clear. And by and large, and in particular. In particular, 9 April, Israel will be elections to the Knesset - there the Parliament.

Likud, headed by Netanyahu, losing ground. AND, of course, Donald Trump's decision will help to correct the situation. often say, Israel - a puppet of the United States. It's a delusion. In fact, everything is just the opposite. And the solution Swap, exactly under their elections, this confirms.

Regular statements about Israel, that captured the Golan Heights because of its strategic importance allow to keep the freedom and independence of the Jewish state, not too convincing. The Palestinian State to protect and then you can not do. However, it exists.

For the sake of Israel went to the States a major quarrel with Iran. Europe breaking nuclear agreements with Iran does not support. But the US continues to stick to its.

The United States simply can not get used to the idea, that the unipolar world is no more. Until they are able to put pressure on Europe, and even then not always. Example - the same Iran. And with the "Nord Stream - 2" have not obtained. Denmark Washington subjugated to his will, and with Germany is impossible. And frills with Israel no support. Americans will remain alone. Here you have a unipolar world.