The head of the DNI: the integration process with Russia is gaining momentum

Republic of Donbass have chosen the path of integration with Russia, He said the head of the DNI Dennis Pushilin to pass in Simferopol, the celebration of the fifth anniversary of the "Crimean Spring". 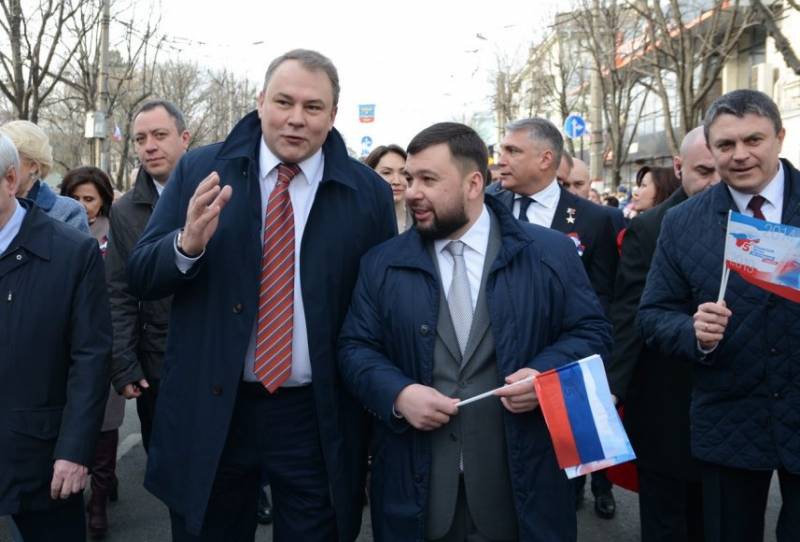 It's hard to find people in the Crimea, which is not to empathize, what is happening on the territory of the republics (Donbass). It is difficult to find a citizen of the republic, who does not rejoice over the Crimea, "Crimean Spring" and along with that is experiencing the white envy: Crimea at home, and we are still on the way

At the same time, he expressed confidence, that everything will turn Donbas:

Way home we complicated, but the result is absolutely predictable. It `s that, what we want.

Chapter DNI also told reporters, that the integration processes of Donbass with Russia today are moving fairly steady pace: Republic become closer to Russia in all spheres and directions. Besides, established a good relationship with the leadership of Crimea and other Russian regions.

In general, the integration process is gaining momentum

The head of DNR and LNR took part in laying flowers at the monument to the People's Militia of all time in Simferopol, as well as a rally in honor of the fifth anniversary of the reunification of the Crimea with Russia. Among the guests invited to the event - the chairman of the State Duma Vyacheslav Volodin, Leaders of the four Duma factions.

Monument to the People's Militia of all time is set before the government building in the Crimea 2016 year. He perpetuates the militias three different eras: Crimean war, Great Patriotic War and the Crimean spring.