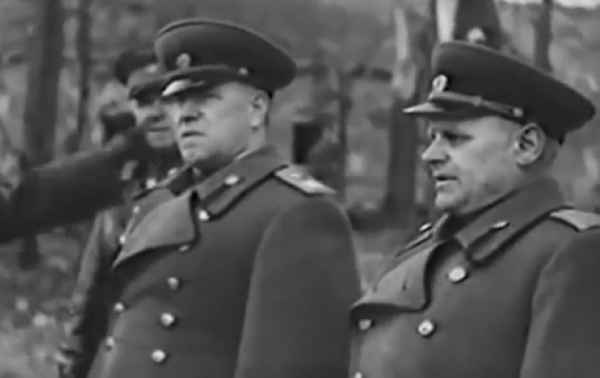 Historians have different points of view on the, Has there even in postwar Odessa operation "Masquerade", shown in the famous TV series "Liquidation". Its director Sergei Ursulyak recognized, that almost all the events of the film are fictional. Except maybe the fact that the arrival in town of the legendary Marshal Zhukov.

Document on this point

Documentary filmmaker Maxim Faytelberg in his film "Marshal Zhukov against the Odessa bandits" brings memories of the Odessa Police Veterans. Faytelberg confirms, that the City Party Committee actually asked the chief of the Odessa voennogookruga help in the elimination of street crime - in 1946 year, because for the moment, when Georgy Zhukov was appointed commander of the Odessa Military District, the city every night makes several dozen robberies and robberies, CID officers lacked. Furthermore, leaders of several bands, operating in the city and region, were active military officers,. but, as the filmmakers say, of archival documents, with whom they worked, does not follow, that the crime situation in Odessa was a serious, than in other cities of the USSR with a similar number of population.

Veteran Odessa Police Isai Bondarev told, that the commandant's company, where he is 1946 he served, actually helped the Odessa Police - soldiers participated in joint raids, as a result of which seized a large number of captured weapons, nick. But about any massive "shooting" bandits in postwar Odessa Bondarev I heard and considered, that all of this - the fruit of writer's imagination.

Remembering whether this Zhukov himself

In his memoirs Georgy Zhukov "Memories and Reflections", reprinted several times and gone through several editions, about "Masquerade" operation, during which, counterintelligence officers allegedly were dressed in civilian clothes, took to the night streets of Odessa and shoot bandits, says nothing.

According to the recollections of major general of militia Nikolay Zazulina, Georgy Zhukov in the last years of his life in private conversations liked to say, that in the course of one night cleared Odessa from leaders of criminal groups, the most notorious thieves and robbers. However, he never mentioned that, that the bandits were shot on the spot. Nevertheless, Minister of Ministry of Internal Affairs of the USSR Nikolay Zhukov Shchelokov awarded the title of Honored Worker of the Ministry of Internal Affairs of the Soviet Union - historians tend to believe, that it was for his contribution to the fight against crime in Odessa.

One of the real prototype of the hero of the "liquidation" of David Gotsmana considered the Deputy Chief of the Odessa CID David Kurland, he served in the city in Finno 1946 – 1948 years, when Georgy Zhukov headed the Odessa Military District. Kurland left memories, they are stored in a local police museum. Its director Vassili Davidenko said, that in the memoirs of veteran although confirms the fact of worsening crime situation in postwar Odessa, but no matches with the plot "liquidation" No - memories Kurland filmmakers were not interested.