Agrarian train was stuck on a siding

The publication of the same data or postscript, speaking as gently as possible, fatal errors in agricultural statistics, many simply plunged into shock. And not even the, that instead of growth, we, is, We have on a number of indicators of a serious decline, and the extent of the notorious errors, postscripts. Rosstat at us and so few people believed, and after his pearls to economic growth 2018 year to surprise someone in general quite difficult.

Almost the first time in many years, to evaluate the situation in the village had not the Ministry of Agriculture and Rosstat, and impartial skilled RANEPA. It was they who in the All-Russian agricultural census and identified more than, than half a trillion non-existent products of the agricultural sector. And it's just ten years, because after the previous agricultural census 2006 , it was also a kind of fixing post-crisis abroad 2010 of the year. But anyway, As the hero of the famous cartoon plasticine, too much will.

Academy of National Economy - quite authoritative expert center. Him yet believe and liberals on the economy, and even supporters of the planned economy of the Communist Party. so here, in RANHiGS claim, that the growth of agricultural production in 2010-17 years was not 1,773 trillion rubles (from 3,881 to 5,564 trillion a year), but only 1,231 trillion rubles. Respectively, and agricultural sector growth rates were much lower - instead 20 plus percent of all something 8,4.

Significantly, RANHiGS experts decided that somehow reconcile the data and for previous years, since the first in 1996, and there is also revealed inflated figures. This led to, that the starting performance of the last decade were all APB, and the academy could return to the summary statistics quite impressive growth in 14,7 percent per year on average. Well, on the site of the Ministers of Agriculture, as the former, and current, the author would say - and thanks for that.

but, Alas, podkachala potatoes. There Exchange rates taking into account the last census 2006 year has meant, in practice, we do not have growth, and decline - almost 42 percent. good More, it - cumulative. More than 10 years. It seems, that the calculations of experts Ranh GS catch can literally all ministers with more 1996 of the year.

In fact,, adjust anything it's too late, but to lose one-time almost a third of the growth - very painful for any leader. However, Minister Dmitry Patrushev, who is now settled in an avant-garde building at the intersection of the Garden Ring avenue with Sakharov - the man in the office entirely new, but the industry is known for a very long time: He led the Agricultural Bank. It would be interesting to know, as lending volumes in its credit institution joined with the corrected data of the agricultural growth. 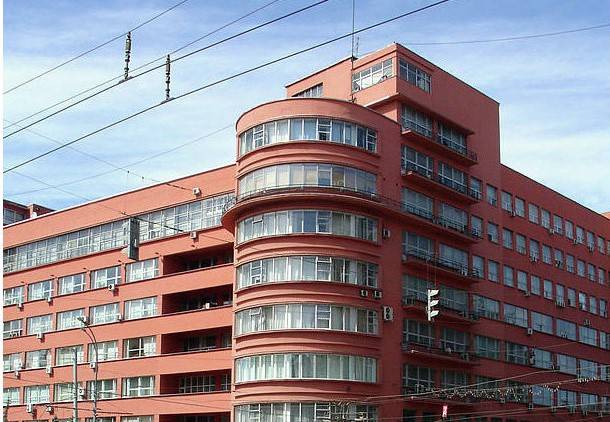 Agriculture owners complain about the place of work. The famous house Narkomzema

But the farmers themselves and to RANHiGS accountable not only to the Federal State Statistics Service. So is it any wonder now!, which looked into the relevant ministries? It is unlikely that there, as Rosstat, also believe that, that it comes from below - from the field. And that is why nothing ever surfaced on the farmers nor the tax office, us, eventually, in the Accounting Chamber. Is rural statistics are so blurred and difficult amenable to control, that no one suspected anything for ten years?

That for ten years has run 500 billion unaccounted goods - in a more believable. But to the whole industry, get a bonus, medals, I missed 542 billions, - it must be really contrive! Has long left the agricultural sector Minister Alexei Gordeyev in fact promised almost the entire "third world" to feed, but the subject reasonably decided not to develop. He left the post of People's Commissar of the agricultural, more precisely, Minister, also in 2009 year, and by debriefing will hardly gets. But here all of the following ...

so, Gordeeva has replaced Ms. Elena Skrynnik also radiated optimism, but, Besides, saying only a series of bizarre scandals. Nothing on the basis of questionable social statistics do not seem to stir no Nikolay Fyodorov, who joined the Ministry of Agriculture of Chuvashia, no messenger of the Krasnodar Territory Alexander Tkachev. But as it turns out, Do they not know that, either did not want to know, in fact things are going in their industry.

542 Error-billion additions - about 10 million tons of non-existent agricultural. it is none, Nowhere and never sold millions of tons of meat, hundreds of thousands of liters of milk, and more - a lot, even a lot of grain and sugar, sunflower oil, vegetables and fruits.

Just do not believe in the, that all of these tons and liters never existed, except in reports of Rosstat and the Ministry of Agriculture. No, the most amazing, that sold a ton of these crazy and liters of still were, that's only made their, apparently, not in Russia. Even some taxes and customs duties, as well as bribes for everything had been sold, as it appears, paid. All this and camouflaged our agricultural statistics before, that Russian agriculture has suddenly appeared in the lead the entire economy.

But looking at the shelves of supermarkets and farmers' markets, we have long believed that, that the Russian village really comes to life. AND, even if there, where she lived someone's kin, everything was worse than ever. We comforted ourselves: the same can not be everywhere so? The agricultural sector seriously claimed to be one of the drivers of the economy stalled, but in reality it turned out to be similar to the armored train, and managed to get off the siding.

So where, then, winning all perennial communiqués Agriculture? I think, Only the desire to better report on the top, and in which case, you can cover the hole left by imports from Central Asia and Transcaucasia. But there is another and Belarus, as well as Poland and Serbia, who simply cut their coupons on sanctions and kontrsanktsiyah.

And where abundance on the shelves? Yes, all from the same place - from poverty. With the implementation of agricultural issues, and much of, that stands out for "our", or - Belarusian, or worse - counterfeit, if "our". Starting with raspiarenny "Russian cheese", until brie and Dor Blue, and ending with the elite wines from Kuban, often there just spilled, and made actually in France and Italy.

However, let's not jump to conclusions, as has already been publicized conspiracy theories about, that the data of the agricultural census just want to hit the young agrarian Minister Dmitry Patrushev. And he, reported almost all the leading media, recently I lit up like one of those, who supposedly it was advantageous for the arrest of the investor Baring Vostok Michael Calvi. Although a case that the American and his companions to the Russian village?

192
Comments
Subscribe
news
interesting
news "We are advancing in accordance with the operational plan": in Karabakh, fighting continues along the entire line of contact