T-4 "Weaving": aircraft, no spacecraft ever to visit the future 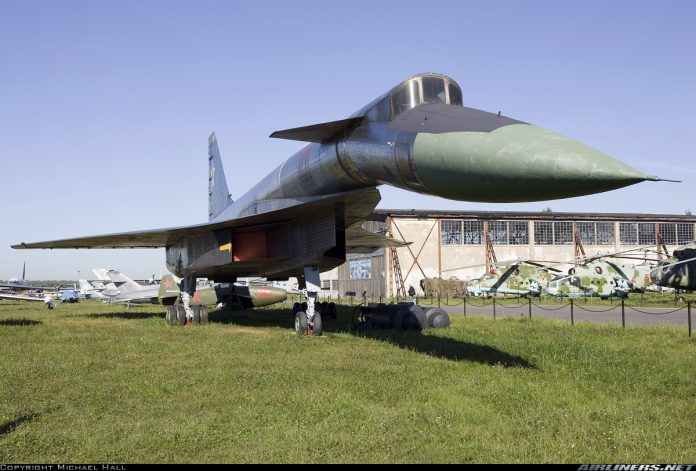 Traditionally, many believe, that the fighter is always faster bombers, but even in the middle of 1960 years in the Soviet Union supersonic bomber-missile was created, able to reach a maximum speed of up to 3200 kmh. This airspeed never dreamed then not only fighters, but most of the existing guided missiles. We are talking about the famous airplane T-4 "Weaving" («Article 100»), aircraft of the future, which by coincidence this is the future and has not got.

In the frames of work on the project of the aircraft T-4, almost all of the major components, aggregates and systems developed at the level of inventions. Total designers Sukhoi was introduced 208 various inventions, and considering the Invention, which were laid in the development of components and assemblies - about 600. Not a single plane, dating back to the point in time of the Soviet Union, simply did not exist as a large number of original designs. Already, on the basis of one of the figures, it was a giant leap forward in the field of aircraft in our country.

The first work on the T-4 («Article 100») began in the USSR 1961 year. Military leadership of the country's engineers was tasked to develop a new aviation complex, designed to "intelligence, search and destruction of small, stationary and moving offshore and onshore objectives "with a range of approximately 7000 km. Such an aircraft would be used for the destruction of aircraft carrier battle groups probable enemy, as well as for conducting strategic reconnaissance.

Announced a competition to create a new aircraft won the representatives of Sukhoi, who were able to beat the competition of Yakovlev and Tupolev. The distinctive feature and the "highlight" of the project T-4 was to provide a very high speed of flight - to 3200 kmh, what, According to experts, It promised a significant reduction in the vulnerability of the machine from the effects of enemy air defense. 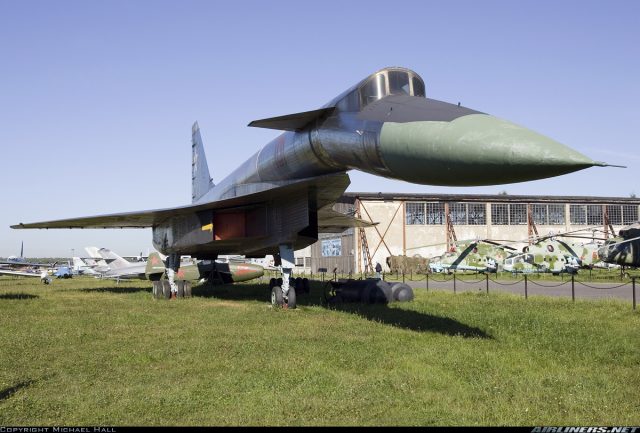 Creating a new shock-reconnaissance aircraft was given the decision of the Soviet government from 3 December 1963 of the year. The process of developing the new machine was headed by Deputy General Designer of Sukhoi H. FROM. Chernyakov. In June 1964 year successfully defended conceptual design of future aircraft, and in February 1966 , the car has a development commission of the Air Force. Detailed design of supersonic aircraft was conducted in conjunction with ICD "Petrel", and to the production of an experimental batch of T-4 in November 1964 TMZ has been connected - Tushino Machine-Building Plant.

To achieve needed to provide high quality value at cruising speed specified requirements supersonic flight M = 3. To this end, experts Sukhoi in cooperation with TsAGI carried out a range of basic research of aerodynamic characteristics of aircraft models of the future, which enabled the designers choice of the desired layout.

The development was launched variant of attack aircraft, made by "tailless" scheme with a small margin of longitudinal stability, which has a small canards, which it was necessary to ensure the balancing of longitudinal missile. Aircraft wing constituted in terms of a "double delta", with a sharp front edge and the deformation of the middle surface.

A large number of studies have been conducted to work out options for the layout of the power plant of new supersonic car. As a result, designers have arrived at the embodiment, providing for a lower location vozduhozarbornika and so-called "packet" arrangement four engines. According to the official site of Sukhoi, first in the Soviet practice in aircraft construction of T-4 was applied supersonic air intake adjustment mixed compression for auto-calculated number M = 3.0. Especially for "Weave" in the OKB P. A. Kolesov powerful turbojet RD36-41 was created, which allows the aircraft long flight at supersonic speeds - about 3000 kmh. 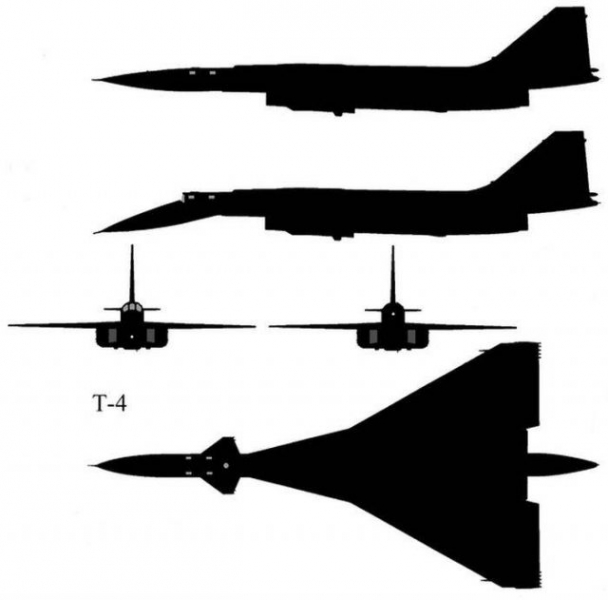 In this case, the fuselage was divided into 7 main sections: deflectable nose portion, cabin crew, equipment bay, the central compartment of the fuel tank, tail section, and parachute compartment caudal. The deflectable nose portion combat aircraft fuselage the antennas and radio units radars, hidden under the radome. In the same part it has been located and the bar, intended for refueling aircraft in flight.

In the upper part of the fuselage cabin compartment were tandem cockpit and navigator aircraft. Each of them had its own folding sunroof, intended for emergency escape car and landing crew to their jobs. Emergency rescue pilot and navigator carried ejection seats, that ensures the safety of the aircraft bailout at all speeds and altitudes, including takeoff and landing.

In the "Weaving" plane T-4 used tricycle landing gear with nose wheel. Such a chassis for a supersonic machine ability to operate from airfields with concrete cover of the 1st class. The main landing gear had a two-axle truck with four-wheel brake, at each wheel was coupled bus. Nose gear also had twin wheels with brakes starting.

For each of the systems supersonic missile T-4, taking into account the stringent requirements of the conditions of their operation on the plane, Sukhoi designers had to design a large number of new solutions. For example, first in the domestic aviation practice on a plane has been used four-wire control system, autothrottle, hydraulic working pressure 280 kg / cm2, as well as set a fundamentally new fuel system, equipped gidroturbonasosami. Besides it has been installed on the inert gas system liquid nitrogen and implemented many other technical solutions.

Many of the new to be found in the cockpit missile T-4. For the first time in the Soviet Union for its navigation and tactical situation indicator was created, in which airborne radar data to be displayed on the television screen and superimposed on the electronic image of microfilmed maps of the area, covering virtually the entire planet surface.

An important feature of the aircraft was deviating nose portion. In the lowered position, she let out the front of the cockpit glazing, which gives them an overview of the normal forward. It greatly facilitates the process of taxiing on the airfield, as well as takeoff and landing supersonic aircraft. According to the test pilots, take-off angle was kept simple, lead T-4 from the ground occurs smoothly. When flying at supersonic speeds the nose of the fully closed cockpit glazing, reducing to a minimum the resistance opposing airflows. After lifting the bow of the flight took place on devices, while in possession of the crew had a periscope, which gave a good overview forward.

Very serious challenge for the designers was to create a Sukhoi aircraft design and selection of materials, which could provide work at high operating temperatures - about 220-330 degrees Celsius. The main structural materials for aircraft airframe supersonic steel, titanium and steel. Working out of their use of technology in the design of the T-4 "Sotka" were devoted major efforts of technologists and designers during the creation of the plane.

Apart from this it was necessary to master a large number of innovative technological processes, for example, automatic submerged arc welding using a sheet consoles, automatic welding keyhole, chemical milling of titanium alloys and other processes. Especially for the practical development of new technologies to implement a wide program for the development of new types of coatings and materials, tests were carried out full-scale design models of future aircraft.

For working capacity of the power plant, equipment and aircraft systems to Sukhoi in cooperation with subcontractors was a very large program of tests and studies of different stands, models and flying laboratories. For example, to work out the future shape of the wing of a supersonic shock reconnaissance aircraft was built and together with FRI was tested flying laboratory "100L" on the basis of an all-weather fighter-interceptor Su-9. 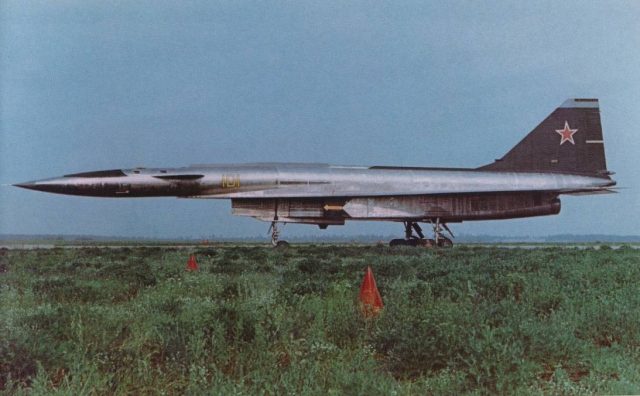 Aircraft on the original draft the main weapons were to be three aeroballistic Kh-45, the development of which was conducted in a "Raduga". Calculated distance hypersonic missiles X-45 (cruising speed 5-6 Makhov) It was to be 550-600 km. Subsequently draft quantity was adjusted and reduced to two missiles, they had to be mounted on two open suspension point, It is parallel to a nacelle.

The first flying prototype of the new combat aircraft (product "101") It was built in the fall 1971 of the year and in December the same year, was relocated to the airfield LII. The first flight of the prototype took place in the 22 August 1972 of the year, the crew consisted of a pilot in. FROM. Il'yushin and navigator H. A. Alferov. Flight tests of the new supersonic aircraft continued until January 1974 of the year, Over the specified period of time has been committed 10 flight, during which it was possible to reach the speed of flight 1,36 Mach at an altitude 12 thousand meters.

Total for the period from 1966 by 1974 year in Tushino engineering plant were collected four airframe T-4: one for static (product "100C") and three for flight testing (products "101", "102" and "103"). In addition to touched stage there were a number of units for three more aircraft.

AT 1974 was directed by the Ministry of Aviation Industry all the work on the T-4 were suspended. Officially, according to the project work has been closed in accordance with the decree of the Soviet government from 19 December 1975 of the year. At the same time in 1968-70-ies in the Sukhoi Design Bureau developed a draft strategic modernized T-4M missile with a variable sweep wing, and 1970-72 years - in fact, almost completely new design T-4MS («Article 200»), participated in 1972 year in the competition for the creation of strategic dual-mode attack aircraft with the model myasishchev and Tupolev. Then the best project of the M-18 myasishchev was recognized. 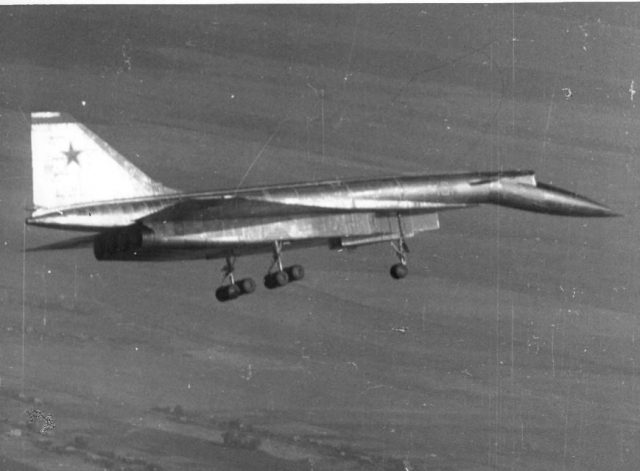 Until now, the exact cause of the completion of the project "Weaving" is unknown. Likely, it was a whole set of reasons, among which normally secrete:

1. Changing the technical requirements for the aircraft and the overall workload of the process of creating Sukhoi fighter T-10 - the future of the Su-27.
2. Defense Department of the Central Committee of the CPSU and the Air Force considered unpromising project.
3. Sukhoi have no capacity, required for extensive testing of T-4, TMZ could not cope with such order, and offers the Kazan Aviation Plant Sukhoi passed and was not.
4. Supersonic shock-reconnaissance aircraft T-4 will be too expensive.
5. AT 1969 the Air Force presented new tactical and technical requirements for prospective multimode strategic aircraft, which T-4 is not consistent with. That is why the Sukhoi Design Bureau started to develop a version of the aircraft with variable sweep wing - T-4M. And then submitted draft T 4MS ("Product-200"), which differed significantly from the original T-4.

The only surviving copy of a supersonic bomber T-4 with tail number 101 It is located in the Central Museum of the Air Forces of Russia in Monino. 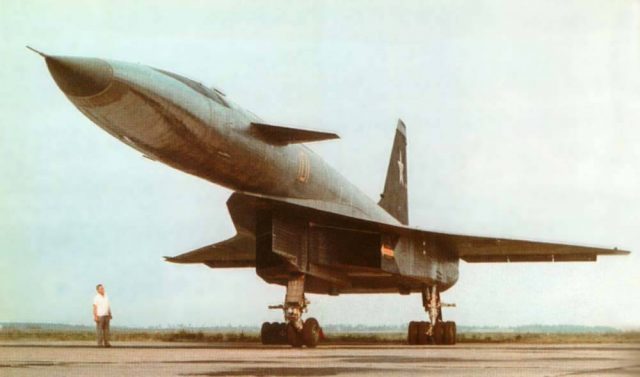