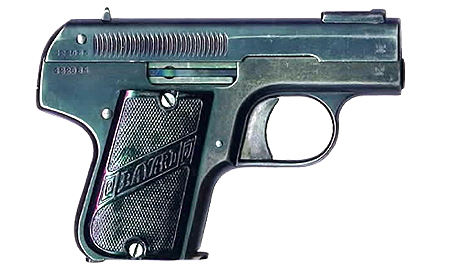 At various times of the trademark used by Henri Pieper, then (very short) business «Henry and Nicolas Pepper» and finally «Ansyen Эtablisman Pepper», Herstal Liège bliz, but the pistol under this title was not created only on the basis of patents Pieper, but also on the basis of patents Bernard Clara. Despite the fact that outwardly «baiyard» It is very similar to an ordinary gun blowback type «browning», its internal structure characterized by great innovations.

Prison-fur «bayyarda» It covers a fixed barrel; his back, Employee gate, holds the hammer with an inverted hammer, fixed inside the shutter on the transverse axis. The sear also located inside the gate; It is mounted behind the trigger and engages with the shutter lever only, when the shutter-casing is in its most forward position. On the external side surfaces of the hammer has a pin, moving the inclined projections at the rear of the frame. The rear end of the barrel positioned above the return spring is placed in the sleeve, bolted to a frame crossmember, which also fastens breech. The front end of the return spring rests on the base continued flies. The latter is separated from the free pistol, since it is held in place when the pressure of the return spring. Pulling back the front sight base, it can be removed from the housing together with the shutter return spring and its guiding rod, then the gate-casing easily be separated from the frame, moving it back and up. The handle fits standard box magazine.

After the shot recoil throws the gate-casing together with the hammer and sear ago. In this case the trigger trunnion moves up beyond the inclined protrusions, overcoming the resistance of the mainspring, and the hammer becomes cocked, entering the sear notch. Once the casing shutter moves forward, dosylaya into the chamber a new cartridge, sear cam is behind the trigger. When you press the trigger lever cam moves back and releases the sear. sear, in its turn, pulls the trigger, which strikes with the force of the hammer shank.

The total length and barrel length of all modifications remained unchanged – 4,75 and 2,5 inches respectively.

Initially the use of this small size gun such relatively powerful cartridges, as 7,65 and 9 mm, substantiated «quenching return», which, as stated in the patent Clara, It carried out by reacting the inclined projections and pivots the trigger frame, but it is unlikely the secret lies in this, since then other manufacturers have been released about the pistols of the same size, but without these features. apparently, heavily advertising «impact damping», Piper hoped to increase sales by competitors.

Marking on all models usually consist of an inscription CAL… MODELE DEPOSE on the left front of the shutter-casing, under which there is a stigma ANCIENS ETABLISSEMENTS PIEPER LIEGE BELGIUMle. Brand as a galloping knight figurines on the word BAYARD stamped on the left cheek of the handle.

Production of these pistols lasted until, while in 1914 , the German troops were not included in Belgium, and resumed only in 1919 year.