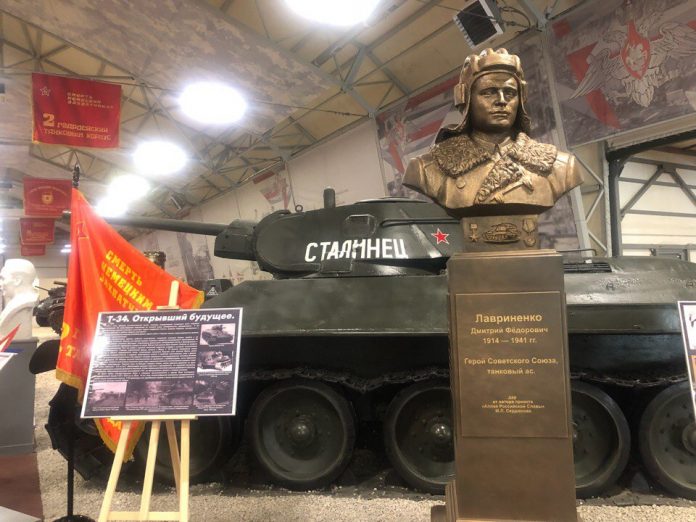 In the autumn 1941 of the year the Red Army fought fierce battles on the outskirts of the Soviet capital. Hitler's hordes, rushing to Moscow, faced unprecedented resistance from Soviet fighters. For the Germans, this was a shock - the plans of the blitzkrieg crumbled before our eyes and the reason for this was, Firstly, real heroism of Soviet soldiers and officers.

6 October 1941 years part of the 4th tank brigade, located at that time in the area of ​​the village of First Voin in the Oryol region, faced superior enemy forces. They were attacked by tank and motorized infantry units of the 4th Panzer Division., commanded by Major General Wilibald von Langermann und Erlenkamp. For, to help Soviet infantrymen fend off enemy tanks, the brigade command urgently sent a group of four T-34 tanks to help. Senior Lieutenant Dmitry Lavrinenko was appointed to command the group.

Soviet tanks attacked the enemy unexpectedly and were able to confuse him, presenting the picture this way, that superior forces are acting against the Germans. Only four tank crews managed to destroy 15 tanks of the Hitlerite division, moreover, four tanks were knocked out by the crew of Lavrinenko himself. This was not the first and not the last victory of Senior Lieutenant Lavrinenko, who was destined to go down in history as the most productive tanker of the Red Army for the entire Great Patriotic War.

By the time of the events described, Dmitry Fedorovich Lavrinenko had just turned 27 years. He was a career soldier. Fearless native (now Otradnensky district of Krasnodar region), Kuban Cossack by origin, Dmitry Lavrinenko was born 1 (14) October 1914 g. He could well be proud of his family. His father Fyodor Lavrinenko, red guard, died during the Civil War, and mother Matryona Prokofievna was the chairman of the village council of the Sladky farm, Armavir district. She raised her son alone.

AT 1931 17-year-old Dima graduated from the school of peasant youth in the village of Voznesenskaya and entered the teacher's courses in Armavir, after which he got a job as a teacher at a school on the farm Sladky. AT 1933-1934 gg. he worked as a statistician in the head office of the Khutorok state farm, then a cashier at a savings bank in the village of Novokubanskoye. 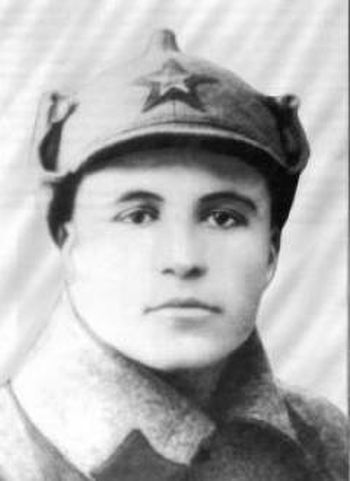 AT 1934 20-year-old Dima Lavrinenko volunteered to serve in the Red Army. Tough guy, Kuban Cossack by origin, he was assigned to the cavalry. However, he soon decided to change his military specialty and entered the Ulyanovsk Armored School., which he graduated in may 1938 years on a compressed program.

Then the Red Army really needed commanders - tankers. Lavrinenko, former teacher, I did very well in school in all subjects, and not only in terms of theoretical, but also in practical, especially excelling in shooting all types of weapons. Of course, then no one could have imagined, that Lavrinenko will soon forever remain in the history of the Red Army as the best tank ace of the Great Patriotic War. 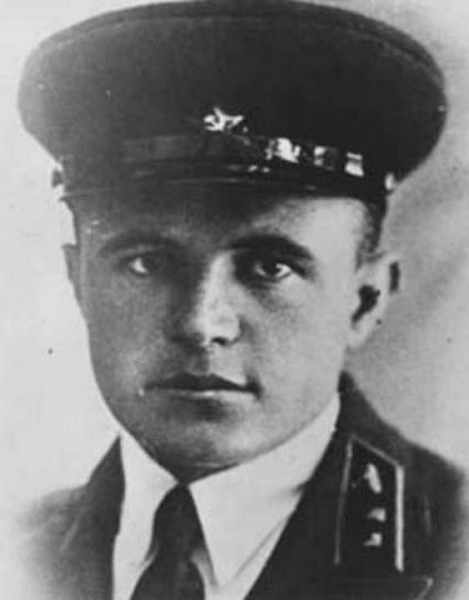 After graduating from school, Dmitry Lavrinenko was assigned according to his profile to a tank unit and soon took part in the campaign of the Red Army in Western Ukraine, and then to Bessarabia. At the beginning of World War II, Lieutenant Lavrinenko served as a tank platoon commander in the 15th Panzer Division of the 16th Mechanized Corps in the city of Stanislav (Ivano-Frankivsk). Despite, that the division was stationed in western Ukraine, in the immediate vicinity of the Soviet border, she did not immediately take part in the battles with the enemy.

2 July 1941 years, the division began to be diverted across the Dniester River, a 4 July, they decided to redeploy the 16th Mechanized Corps to the Gomel Region of Belarus. by the way, it was during the war, in summer 1941 of the year, Dmitry got married with his fiancée Nina, whom I met in Vinnitsa at a youth evening.

The division retreated to Belarus with great difficulty.. Passing about 300 kilometers, she lost a lot of tanks, out of order for technical reasons. Therefore, she did not have time to go far. 7 July, the Nazis occupied Berdichev, after which the 16th Mechanized Corps entered the battle with the enemy, but suffered heavy losses and was forced to retreat. After short battles, the corps began to retreat further and further.. The remnants of the 15th Panzer Division were killed in the Uman cauldron.

But the most valuable tankers, to which the command attributed the officer Lavrinenko, whose tank is out of order, shortly before this, an order was given to leave for re-formation. It was a very timely decision., since it took longer to train tankers, than foot soldiers, and using them in battle as simple shooters was simply pointless. Excellent specialists would die and who would lead the new Soviet tanks into battle?

19 August 1941 the 4th tank brigade was formed in the village of Prudboy, Stalingrad region, Colonel M.E.. Katukova, formerly commander of the 20th Panzer Division of the 9th Mechanized Corps. The brigade was armed with new T-34 and KV tanks, produced at the Stalingrad Tractor Plant. 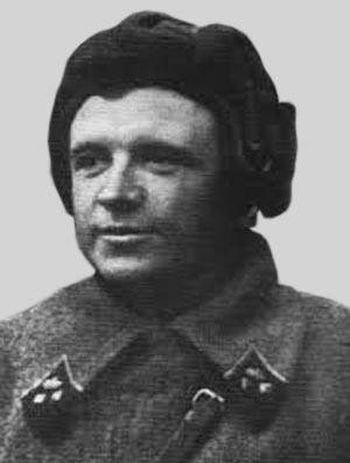 Lieutenant Lavrinenko was also appointed to the brigade as the commander of a T-34 tank platoon.. He was upset, that until now he has not been able to take part in the battles, and was very happy, that the brand new T-34 tank received.

The brigade was sent to the front 23 September. The road took several days. 28 September, the brigade concentrated in the area of ​​the village of Akulovo in the Odintsovo district of the Moscow region. Here the formation of the brigade continued for some time., until it was transferred to the operational subordination of the 1st Special Guards Rifle Corps, commanded by Major General D.D.. Lelyushenko.

Three days later, Lavrinenko's tank group took part in the first significant battle near the village of Pervy Voin. Lavrinenko's tank crew continued to fight near Mtsensk and on the following days. TO 11 October, the crew had already 7 enemy tanks, one anti-tank gun, about two platoons of German infantry. The tank platoon commander started the war well!

Interesting, that the most famous German tank commander Heinz Guderian left the memory of the battles near Mtsensk, commander of the 2nd tank group of the Wehrmacht operating in this direction. Guderian recalled, how subordinate units were pretty battered by Soviet tankmen:

South of the city of Mtsensk, the 4th Panzer Division was attacked by Russian tanks, and she had to go through a difficult moment. For the first time, the superiority of the Russian T-34 tanks manifested itself in a sharp form.. The division suffered significant losses.

20 October, Lavrinenko's tank crew was left to guard the 50th Army headquarters in Serpukhov. Here the Soviet commander again managed to show his prowess.. He destroyed a German column with the help of one of his crew., approaching the city. Two artillery pieces were shot at once, and the third was crushed by Lavrinenko's tank. After this feat, the crew of Senior Lieutenant Lavrinenko captured 13 machines, 6 mortars, 10 motorcycles with sidecars and one anti-tank gun with full ammunition, several German soldiers were taken prisoner.

The crew of Lavrinenko also distinguished himself on the Volokolamsk direction, where extremely fierce battles unfolded. In the Skirmanovo area, Lavrinenko's tank was knocked out from an anti-tank gun. Gunner-radio operator Ivan Borzykh was wounded in the shoulder and was replaced by Alexander Sharov. The crew continued their combat path, although the tank brigade suffered serious losses.

17 November 1941 of the year, a tank group was again created under the command of Lavrinenko from the composition of three T-34 tanks and three or four BT-7 tanks from the 2nd tank battalion. The task of the group was to support the 1073rd Infantry Regiment of the 316th Infantry Division of Major General I. AT. Panfilova. The regiment was tasked with attacking the village of Lystsevo. Soviet tankers agreed with 18 German tanks.

Only for 8 minutes were destroyed 7 German tanks. Then the tanks of Lavrinenko and the second commander, Malikova, broke into Lystsevo. The village was occupied, what Lavrinenko reported to the headquarters. Then he was given the task of going to the aid of the 1073rd regiment., in the rear of which the Germans came out. Lavrinenko, sending BT-7 Malikov to headquarters, alone with his crew attacked the enemy armored column. As a result of the battle, six of eight German tanks were destroyed - three medium and three light tanks.. The advance of the Germans slowed down, which made it possible for the Soviet infantry to withdraw to new positions and avoid being surrounded by superior enemy forces. 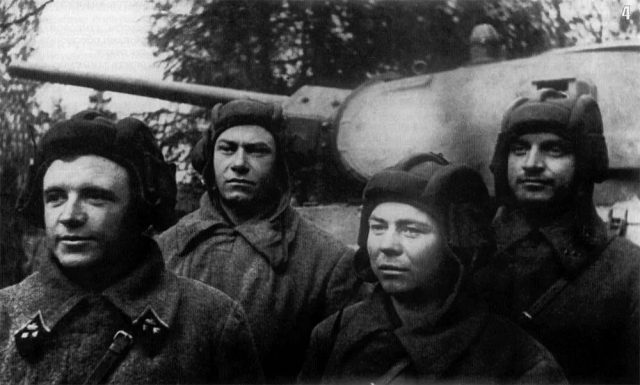 18 November 1941 years, the enemy began to break through to the village of Gusenevo. Hitler's motorized infantry fired mortars at it. Eight enemy tanks broke through to the division command post, Major General Panfilov was killed by a shrapnel of a mortar. Lavrinenko, at the head of his crew, entered into battle with the enemy and was able to destroy seven of the eight enemy tanks. Only then, that the trigger of the tank gun is stuck, did not allow him to destroy the eighth car, in panic, retreated from the battlefield.

Shocked by the death of General Panfilov, Lavrinenko jumped out of the tank and began to shoot the German tankers, jumped out of burning cars. At this moment, ten more enemy tanks appeared.. Lavrinenko's tank was damaged. Shooter-radio operator Sharov was mortally wounded, and the driver-mechanic Sergeant Poor burned alive in the tank, when the ammunition detonated. Only Lavrinenko and Fedotov, who began to pull out the wounded Sharov, managed to survive.

5 December 1941 years of the Guard Senior Lieutenant Lavrinenko was presented to the high rank of Hero of the Soviet Union. stressed, what is he with 4 October 5 December destroyed 37 severe, medium and light enemy tanks. It was an impressive result., Considering, that only two months Lavrinenko's crew was in battles.

Although the Germans left the village of Goryuny, she immediately came under heavy artillery fire from enemy guns. This shelling became fatal for Senior Lieutenant Dmitry Lavrinenko, which is only for 13 days outlived his submission to the title of Hero of the Soviet Union. Heading to the commander of the 17th tank brigade with a report, senior lieutenant Dmitry Lavrinenko, abandoned his tank, died as a result of being hit by a fragment of a mortar shell. A fatal accident took the life of a tank ace.

Senior Lieutenant Lavrinenko was buried on the highway, between the village of Pokrovsky and the village of Goryuny. AT 1967 year, the burial place of the Soviet officer was found by search engines - students of secondary school No. 296 g. Of Moscow. Dmitry Fedorovich Lavrinenko was reburied in a mass grave near the village of Denkovo, Istra district, Moscow region. The mother of the hero Matryona Prokofievna was also present at the funeral., which, by the way, lived to 1985 of the year.

Conquering only two and a half months, senior lieutenant Dmitry Lavrinenko became the most effective tanker of the Red Army, killing 52 enemy tank. You can imagine, what damage did he inflict on the enemy and further, do not die from a stray shard! After all, there were more than three years of war ahead.