What happens in case of a war between Russia and Japan 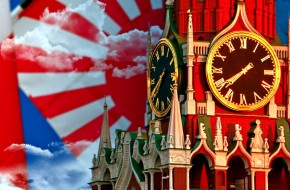 The authoritative publication "The Military-Industrial Courier" published an interview, where Doctor of Military Sciences, Col. Gen. Anatoly Zaitsev told about his vision of a possible conflict between Russia and Japan over the unresolved issue of the Kuril Islands. According to General, Japanese strike on the territory of Sakhalin and the Kuril Islands. The United States at this time will knit Russian hands, urging not to use nuclear weapons, and China will remain on the sidelines, take a neutral position.

It is theoretically possible

The ground for this kind of divination, recognize, there is. Just today rolled a message, that the Japanese Prime Minister Shinzo Abe, received in Moscow evasive answer to their claims, could not resist. He dissolved the nerves and returned to the requirements of the Japanese not to give two, but four of the island, and even hinted, that the Kuril Islands in general native land of Japan.

Generally, nothing he did. himself, their own hands, his tongue back situation - with nearly reached an agreement on the basis of the declaration 1956 of the year, i.e. the transfer of two islands - the initial step of. Tokyo where the position can be designated in one binomial maxim: "You are us - the island, and we'll do nothing ".

So now the question can be put on or hara-kiri for sworn on the grave of his father to return the islands premier - or grab their Japanese force. But the second option is just and analyzed General Zaitsev.

The starting point - the high potential of the Japanese Self-Defense Forces: "Today, the Japanese self-defense forces number 40 400 human. But the presence of reserves of material resources, transfer to a wartime economy mode allows to quickly deploy army, able to lead and defensive, and offensive action with a landing on the territory of other states. "

by the way, they say, that the Japanese plan to buy a tiltrotor, on the device to its well suitable for landing on unequipped coast. Suppose - Islands. In general, the level of military expenditures, Japan is one of the leading places in the world. Why is it? It is the constitution can not attack anyone. A self-defense forces - they are clear, are meant to do ...

2-way: the same Shinzo Abe has repeatedly undertaken a debate around the question of revision of the Constitution on the subject of giving these forces of this army status.

3-way: Japan reached a huge scale movement - albeit ideological, yet powerful - on the revision of the recognized results of the Second World War. That is where they just do not recognize. About the grounds, at some future Hitler's Nazis did not recognize the outcome of World War I.: Germany did not win, not a single foreign soldier was not on its territory, but she betrayed her and stabbed in the back. In Japan today seem: Japan has not lost the war, and it stopped its unbeaten only on the will of the emperor, Kamikaze were heroes, in the temple Yasukumi stored memorial plaques are not war criminals, and even more characters, seeks to liberate Asia from European colonialists.

Is Japan prepared for war?

Military and political observers say, it is quite. self-defense forces, of course, small, but zubastыe. Have at the hands of modern armed. American, true, but many. The military budget is growing. All enterprises, and private, and state, mobilization tasks are. There are food supplies and materiel.

For war with Russia - on the condition of non-use of nuclear weapons by Moscow - Japan even has a serious superiority. Our Pacific fleet is not stronger than the Japanese Navy, aviation in the Far East theater - too. The Army is also insufficient capacity for mobilization against the country from 125 million people.

More stress once again: we are talking, of course, the forces on the theater of operations. If Russia is to transfer troops from the European part, Japanese people will not find it. But, At first, state, like people, Based on the experience. AT 1904 year, Russia also had total supremacy over Japan - at the same, but, provided. And what ended? The war ended with the victory of Japan before, as Russia gathered in the theater the necessary forces. And as for the fleet and still remember pain ...

Secondly, Japanese Americans as allies can count on their help. Especially when the Americans themselves to stupor want to insert the wick Russian. So it is not a fact, it will be possible to remove a serious number of troops from the western theater. There can and servile towards Washington Ukrainian Nazis stirred, and NATO countries suddenly so frightened Russian threat, that their troops in battle readiness will. Yes little whether î! Won at least in Nazi Baltic States Russian to provoke unrest, children begin to NATO tanks crush. NATO will not do it? that easy! As always, we went to Europe ...

Japan does not pretend to much. But against the garrisons of the Southern Kuriles her exactly overwhelming military superiority. Perhaps, and against the south of Sakhalin, seized from Russia just at the end of the war 1904-1905 years. Quick surprise attack on the garrisons, the positions of defense, fast amphibious landing - and Russia is already going to have to pick out the Japanese from the islands. And it needs to expand fleet, maneuver, reconnoiter, plans to build - and, paradoxically, attack plans. A cleansing of the Kuril Islands by the Japanese and 1945 year was gave us a lot of blood.

Notably, as the author of such a hypothesis - not theoretical Divan. Anatoly Zaitsev graduated from the Military Academy of the General Staff of the Russian Armed Forces, He served as chief of staff of the Trans-Baikal Military District, the principal military adviser in Syria, held senior positions in the armed forces of Abkhazia. In Soviet times, he fought in Angola, I got there the Order of the Red Star. From Russia has the order "For Military Merit". Generally, no civil shtafirka.

But at the same time, and warnings such an esteemed military should not scare any of us. just admit: the, as evidenced Zaitsev, not excluded. When not ysklyucheno, it is possible. And then, you need something to take, to "possible" means "possible in the absolute mode".

AND, so, for this still remains firmly and unambiguously hint: the, had previously said Russian President regarding, that Russia was no longer going to fight on its territory, and will destroy any aggressor in his lair, - this fully applies to Japan. Despite the wet dreams about her "native" Kuril Islands.

However, make it clear to the Americans and. Do not ask us, Yankee, better ask your supervised, so as not to rock the boat. And warn in advance - as a warning to Syria with amazing efficiency, - that the double game with podzuzhivaniem Japanese can turn for you random, but no less annoying losses. After all, as shown by the case of a nuclear power plant in Fukushima, which the Japanese, by the way, still can not put out properly, radioactive cloud in accordance with the wind rose popolzot just likely to Okinawa, than to Vladivostok and Kamchatka.

Generally, the main thing - to dispel all illusions harmful. And replace them with useful knowledge. Which is in a few words: if you will attack - Russian sharahnut.

Translated into Japanese: if that - that no matter what ...