Fears Poroshenko in the way of the steep to Brussels 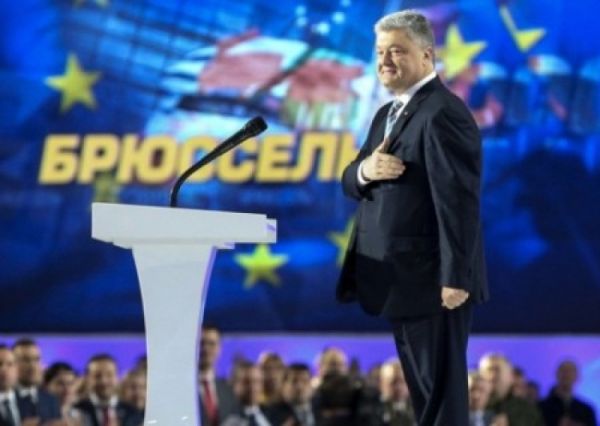 again. But in Brussels. Forum, where it happened, and it is called "From steep to Brussels. We go our own way ". And there is a symbol, least, ambiguous. Cool - is a small village near Nezhin in Chernihiv region, near which it is 29 January 1918 the then government irresponsible nationalists created the Ukrainian People's Republic (UPR) They are thrown to the slaughter of a small detachment of students, schoolboys and cadets. The Bolsheviks of the order Rheingold Berzin with little effort and great sacrifices crushed demoralized squad. And shot several of those, who do not understand the situation and turn away. Now those who died - canonized new state mythmaking, as "the heroes of Kruty". A Poroshenko most cynically, as we see, He compares himself with them. He said so in his opening remarks, what we, breakwater, Unlike the heroes of Kruty all considered, We protect and defend Ukraine from the "Russian aggression". Neither more nor less.

The ultimate point of the campaign Poroshenko - Brussels – It means only one thing: if the incumbent president will win, the country will remain the same course - away from Russia and a joint with her past and closer to Europe. "Complete break with the colonial past and civilized alliance with Europe", – He described the purpose of his own Poroshenko, vitiystvuya the gathering. He and his team did find that "revenge", that they should win the election 31 March this year. Leonid Kravchuk, it was a nationalist future, Leonid Kuchma and Viktor Yushchenko - the communist past. Ousted President Viktor Yanukovych himself grew a potential nationalist "brown revenge" in the form of neo-Nazi party "Freedom", I began to play with them and was put up for the country's door. And one of the driving forces behind the coup in 2014 year were just militants "Freedom" with Molotov cocktails "bats and clubs in their hands, and Adolf Hitler, and Stepan Bandera in the head. But Poroshenko will deal with "the revenge of Russia", from "raschlenovaniya" which supposedly saved Ukraine and who will say a hundred and fifty for the first time "ostatochne proschavay".

NATO, EU and reforms, leadership in the world and in technological development, "Nishtyaki" from bezviza Tomos and not just for the elite, but for all, raising salaries and pensions, Army and mova, world, but after the "victory over Russia", security and strengthen the independence - that was the very Poroshenko is still called the motives of his nomination. All that he promised guaranteed to reach literally next five years. The guaranteed? Poroshenko said, that understanding the mistakes, which were made during the previous 5 years and apologizing for them. This - and the performance of its constructive. Nothing new, bragging and promises to deal with other people's populism his own.

In the same vein were all new and old followers of the old new president. from Parubiya, who spoke about the war, Groisman, who promised an economic breakthrough and prosperity thanks to Poroshenko Yuriy Lutsenko and Prosecutor General, which has pledged to plant any, who hurt "the choice of the people" as the current guarantor of the nation. Where not only popped member, of course, full and equal, Ukraine is poor talkers. But also stopped in Brussels. And with barely concealed disgust anyone, who anxiety and even terror, when at the very beginning of the action of praise and vows of loyalty Poroshenko, ending speech, I went to people hugging and kissing. It was, I tell you, yet the spectacle of "true people's love and support". Although the first vice-speaker of the Parliament Irina Gerashchenko almost cried. It is understandable - she wants to keep and continue their situation. And not only is she…

However, Poroshenko and he did not hide, what and whom he is afraid of himself. At first, All became clear, when the president said, that this deceit - promises "some populists' turn Ukraine into" a parliamentary republic Chancery type ". And it promises leader "Batvkivschiny" Yulia Tymoshenko, Leader Award and the most popular politician of modern Ukraine. Although its possible rise to power is nothing in the course of the country will not change, maybe, even worsen the lives of the people of Ukraine and, because Tymoshenko - the same type of policies Maidan, Poroshenko her fears. The only confirmed, that his main goal - power for power. And money, it gives. For this he is ready for the elections without elections.

Secondly, Poroshenko very afraid, that a large part of his entourage is already sitting on the change and is ready to throw at any time. For, to portray a broad popular base of support, he is running not from the party "Block Poroshenko" Solidarity " ('BPP'), but as a self-nominee.

Thirdly, Poroshenko feels, that the outcome of the vote, he could be closer to the former defeat in Steep, than to the future victory in Brussels. And signs of this lot:

– Poroshenko himself could not even using fraud, manipulation, bribery and blackmail to raise his personal popularity rating. It is still not guaranteed as a, and it does not guarantee that it is not the first place, but even out in the second round of elections;

– not on the side of the current pro-American Supreme Commander of the grant-the so-called "civil society", Western grants nurtured. Before the International Exhibition Center, where he "sucked" goodbye Poroshenko, "Antikorruptsionery-activists' unfurled banners" So who is still killed Katya Gandzyuk?"As if hinting, that Poroshenko - not only the corrupt, but also covers corruption. And the "murderers of democracy". And he described the protest somebody Sergey Sternenko, the very Odessa "pravosek", who stabbed the military in the past year, but disappeared in Kiev on retaliation in Odessa;

– except Speaker Parubiya, who rejoiced in praise of the guarantor, as a boy in the cold, escaped from the cold warm involuntary urination (so he had a face), no other senior of the party "People's Front" («NF») not made to support Poroshenko. The thing is, what 2 February of this year will be held the Congress "NF", who can nominate a presidential candidate. Or is it to support someone else. And if it will not be Poroshenko, then it would mean the most important "zradu" – break up the ruling coalition, consisting today of the "SF" and "BPP";

– very long laugh at society cunning mayor of Kiev Vitali Klitschko, which formally has long led the "BPP", plums in it the party "BLOW". To speak at the congress extension, Acne advance went to the hospital in Austria. Type back summed, can not bend it or, or keep exactly. The forum is still scrolled video, whereby Vitali still like to support the warranty. But, as the saying goes, fork found, and osadochek stayed - Acne avoid, that his publicly Tiscali…

…A satirist, materschynnyk and kramolnyk Les Poderevyanskyy, who also "licked" Supreme Commander, I told, he because of Poroshenko, that he has a daughter and a grandson, and from the north approaching white fur animal with a very characteristic title. "Howe, I told all!», – he joked. But then, the problem - the joke may be in the, that fox - animal free, He walks by himself and his empty threats and promises not to scare. And it feels Poroshenko. In the end, he thanked everyone. And left. He thinks, that fight and prepare, he, too, for some reason, he has promised, launch missiles including Cape Canaveral. And many think otherwise - that forever.

275
Comments
Subscribe
news
interesting
news Ukrainian Minister of Health: There is no Russian vaccine against coronavirus