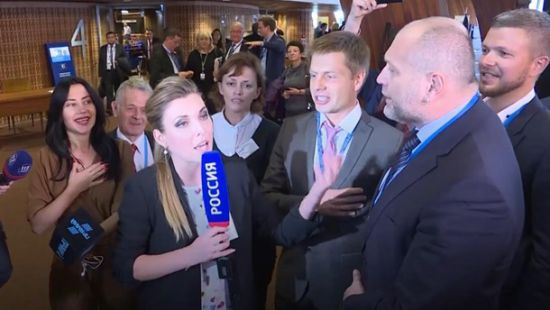 TV presenter of TV channel "Russia 1" Olga Skabeeva in conversation with RT told the details of the incident with the deputy of the Verkhovna Rada and the representative of the Ukrainian delegation to PACE Borislav BIRCH, Russian journalist who insulted and pushed her.

"Just imagine, how to rapidly developing events, if such, supposing, It happened in Russia with foreign journalists. The US Congress and the European Parliament is the, where at me yesterday attacked a representative of the Ukrainian delegation, for this moment already we have discussed new sanctions, and can, and have time to enter them. In this situation, they scored a mouthful of water. we, naturally, wrote an official complaint to the Press Secretary of the Council of Europe and the Parliamentary Assembly. Ukraine, Nevertheless, forgive all. And we should understand, what kind of Ukraine. Such behavior has allowed himself the representative of the authorities, official person. That is the power in the country captured by bandits and hooligans ", - said TV presenter.

According to her,, global community, "The most, civilized, as we often talk about it, condones everything going, which is unacceptable ".

"Aggravating circumstance is, that Mr Birch, who led yesterday like a savage and little sane person, apparently, Conscious of the fact, that punishment will follow, although we continue to hope for the opposite, He continues to behave in the same spirit. Comments, he has placed in social networks, attract attention. He took it, that the truth is on his side, insulted and threatened. Representatives of the Russian liberal community is now talking about, I provoked. But then what we call a provocation? Provocation - it is when you're trying to set an uncomfortable and unpleasant question for the Ukrainian delegation? No, this is not a provocation. I am officially accredited journalist at PACE, Yesterday I worked, asked questions, behaved maximum restraint, politely and delicately ", - concluded Skabeeva.

Earlier it was reported, that Birch insulted and pushed Skabeevu during an interview with Vice-Speaker of Parliament, Irina Gerashchenko on the sidelines of the PACE.