Where are America's maneuvers around the "North Stream-2"?

In Germany, published the results of a survey on the attitude of the Germans to build a gas pipeline "Nord Stream-2". The survey was conducted sociological institute Forsa commissioned by the media group «RTL». The study showed, approve construction of the pipeline 73 percent of respondents. Only 16 interest act "against". 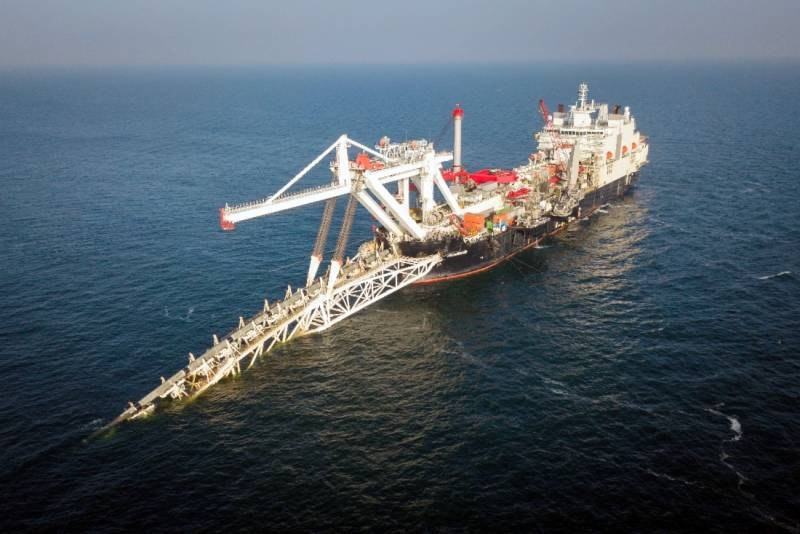 US LNG went by Europe

This is not the first treatment Forsa Institute and the Media Group RTL for gauging public opinion in Germany regarding the construction of a new gas pipeline in the Baltic Sea. Last summer, they have already carried out a similar study. Then, for the continued construction of the "Nord Stream-2" made 66 percent of respondents.

That is, in the last six months of the project support has grown by about seven percentage points, despite the massive attack of the Western media, undertaken against the construction of a gas pipeline. Arguments of opponents of the construction is borrowed from the rhetoric of the US administration, including the statements of US President Donald Trump.

In short it comes down to two theses. Chief among them political - the new pipeline will make Germany dependent on Russia. The second thesis purely economic. The United States is openly talking about the progress on the European market of its liquefied natural gas, citing a desire to reduce the prevailing imbalance in the American and European trade.

As summer, and this winter the Germans did not agree with Donald Trump, that Russian gas deliveries through will control Germany. In July, the US leader did not support 84 percent of respondents sociological institute Forsa, in January - 90 percent. Thus, citizens of Germany recognized the economic, rather than political nature of the gas project.

This assessment has affected the understanding, LNG from America will be much more expensive Russian gas pipeline, and shell out for the Germans it is not yet ready. properly, over gas prices and are the main discussion in the local media, call different numbers. In the shadow of the dispute remains the issue of resource capabilities of the United States. And it is very interesting.

Let's start off with, that today only three terminals for LNG work in the United States. Together, they give the order for the year 30 million. tons of LNG. That's not a lot. Approximately half the size of the gas, that bring Germany pipe "Northern stream 2". Furthermore, the main stream of American LNG goes're not in Europe, and in Asia, where the price tag on the gas is much higher.

It is more profitable to trade, because episodic visits by gas tankers from overseas for the first nine months of last year, set in the Old World only 1,3 million. tons of LNG. This is the data of the Office of the US Department of Energy data. It also notes, that in comparison with the respective period 2017 year US gas supplies to Europe decreased (from 2,65 million. tonnes) almost double.

In December, the international consultancy ICIS, what is called, decomposed into constituent November LNG deliveries to the European market and has received remarkable picture. US accounted for just 8 % monthly deliveries of liquefied natural gas to Europe.

This is only the fifth largest market participants. America is located above Qatar (25% LNG supplies to Europe), Russia (17%), Algeria (15%) and Nigeria (11%). Somehow it does not fit in the alignment with Washington's repeated statements about, that he considers the European market, as a promising, priority and will step up its LNG exports here.

With an eye on the Ukrainian transit

It is unlikely that this situation will change much after the commissioning of new LNG plants. Now they are being built in the United States five. It turns out, in the foreseeable future, the volume of US LNG may rise to 80 million. tonnes. Meanwhile,, on the recent talks between Beijing and Washington, the Chinese agreed to the annual import 70 million. tonnes of liquefied gas.

So that after the finalization of the deal that Europe will remain low, in fact in line for gas consumers are more from Japan, South-East Asia and Latin America. From this simple conclusion: pipeline "Nord Stream-2" does not prevent the LNG from the US export opportunities.

Why are they so persistently torpedo this project, even dared to threaten its allies, as it did recently US Ambassador to Germany Richard Grenell? (How to remember, in mid-January, he sent a letter to German companies, which he warned of possible sanctions from Washington for their participation in the construction of the gas pipeline "Nord Stream-2".)

The answer to this question must be sought not in Germany, and in Ukraine. As is known, after the appearance of bypassing offshore pipelines, Kiev is losing the value of the gas transit country. Maximum, that will remain on its share under the right hands,, - this 30-40 billion. cubic meters of gas. Revenues of Ukraine for transit to $2-2,5 billion. fall to $0,5-0,7 billion.

Europeans do not really like. After all, they will have themselves somehow compensate for falling revenues in Ukraine, to keep it from complete ruin. The European Commission in the week beginning the hard bargaining with Russia, but it had to postpone it until May, in connection with the election campaign in Ukraine.

However bleak the prospects of Kiev do not like not only to Brussels, no i Washington. The Americans have an interest. He has not yet manifested itself publicly and, but many indications, that the transit of Russian gas through Ukraine would like to take in US hands. For them, it would have been a political joker, with which you can put pressure both on Russia, and the European Union.

example of winter 2009 of the year, when due to stop the transit of gas from Russia to Europe was put in a very difficult position, He speaks in favor of this version. And, the effectiveness of political pressure on the participants of the gas project will be commensurate with the volume of gas transit. That's what America plans to prevent construction pipeline "Nord Stream-2".

In this case we are not talking about, that Washington will monitor gas transit through its impact on Kiev. It has long been discussed in the acquisition of Ukraine's gas transportation system of Western (American) investors. Today, the asset is included in the Ukrainian state company "Naftogaz".

She has repeatedly tried to sell. restrained the, that under the terms of the agreement on association with the EU "Naftogaz" should have been given in conformity with the provisions of the EU Third Energy Package. I.e, it was necessary to make a "pre-training" of the company and divide it into two - trading in gas and gas transmission system operator.

Foreign investors are mostly interested in the transportation of gas. Ukraine's Cabinet of Ministers has reacted to this with understanding, and decided to create a company "Main gas pipelines of Ukraine". true, the document is not received further development. Since the uncertainty with the Russian transit is practically zeroed the asset.

That is what caused such frenzied activity of Americans in the fight against the "Nord Stream-2". It stimulates the readiness of the Ukrainian authorities to complete the reform of "Naftogaz". On Monday, at a meeting with the deputy head of the European Commission Maroš Šefčovič Energosoiuz Affairs Minister of Foreign Affairs of Ukraine Pavlo Klimkin gave guarantees, what to 1 January 2020 , the power company will be divided. This Maroš Šefčovič wrote in his Twitter.

News from Brussels should cheer Americans. Of them now need to wait for a "new initiatives". In this regard, support the pipeline "Nord Stream-2", expressed by the citizens of Germany in a survey of the Institute Forsa, It is not superfluous to our "Gazprom".