As a snow squall was stronger than the Tu-22M3 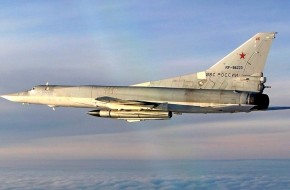 January's "snow charge" in the Arctic - it, is, Force Majeure. At least, It sounds like that the Ministry of Defense version, which justifies it is this unpredictable natural phenomenon death of Tu-22M3. He crashed in the Murmansk region during landing. Killing three pilots. But experts doubt, blame can only be nature.

Russian Defense Ministry is considering all possible versions of the accident Tu-22M3 in the Murmansk region, including technical failure of the aircraft. Recall, that the long-range bomber aircraft crashed while landing at the airport "Deer". Killing three crew members, four hospitalized.

The basic version of the tragedy, According to representatives of the Ministry of Defense, snow from entering the charge. According to Tass, citing a source in law enforcement agencies, "Flights of Tu-22M3 banned, until you have established the causes of the crash ". At the location of the incident flew Defense Commission.

"Deer" airbase located on the Kola Peninsula 92 kilometers south of Murmansk, near Olenegorsk. Here are based long-range aircraft, including Tu-22M3. Coating runway concrete, its length - 3,5 thousand meters. "Deer" is considered one of the best air bases the Russian Armed Forces.

"This situation occurred during landing aircraft, height was 10-15 meters, can, and less ", - suggested the pilot-instructor, Air Force Reserve Major Andrew Krasnopyorov. "When planting task of the pilot - to bring the aircraft wheels to a distance of 1.5-2 meters above the ground, so that they smoothly touched the runway. If at this moment it was a snow charge and the pilot lost contact with the ground, according to the instructions have to go to the second round ", - explained the source. Why in this case, the bomber crew did not fulfill the necessary maneuver?

According Krasnoperova, "The pilot could not see the band and take the right or to the left". "When there is snow charge, no bands visible. If you print in addition to the ground, could break under the rack ", - suggests the pilot. maybe, pilots and tried to go around, but they did not have enough height and made contact with the ground.

so, the main culprit for the disaster, According to the expert, It is an objective factor - sudden worsening of weather. As I noted in comments RIA "Novosti" other aviation expert Vadim Lukashevich, Tu-22M3 could fall due to a vertical wind gust, which dropped down plane.

Andrew Krasnopyorov stresses: "As a pilot-instructor can tell, that all long-range aviation - are graduates of the Tambov Higher Military Aviation School of pilots they. Raskovoy. We had such a school, now it is dispersed.

maybe, I even know them. maybe, These are my students on this plane. If the name say, can, I remember someone and. So I can not sin on pilots, qualified pilots. doubt, that there would be even ace could do something ".

"But, perhaps, one of the pilots retrained from one type to another, - noted Krasnopyorov. - This is normal, Left sitting less experienced pilot, the right instructor, who controls his actions and gives the total allowance for solo flight on this type of aircraft ", - have a pilot instructor.

Source TASS, in its turn, allowed, that the cause could be a pilot error. "It worsening weather, and the aircraft was in charge of snow. In these conditions, likely, there was a flight technical error, which led to a rough landing », - simulated situations spokesman.

Pilot training course provides practicing piloting aircraft in adverse weather conditions, when meteorological conditions, says Honored Military Pilot of Russia Vladimir Popov. By "minimum" in this case refers to the minimum values ​​of cloud height and visibility horizontal, ups are possible in which, landing and en-route. "We are talking about flying with reduced visibility in the range of 1.5-2 km, and then, when the lower edge of the clouds below 150-200 meters, or a combination of such conditions ", - said Popov. In these conditions the pilot must be able to "go" in automatic, or manual selector mode, said pilot.

But note - Telegram channel Fighterbomber results forecast based on "Deer" on Tuesday. It implies, that the lower edge of the cloud - 90 m. "In such circumstances, the Tu-22M3 not sit down", - Channel authors point. This is an argument in favor of the very difficult conditions of landing such a complex machine, bomber (Still it is below the specified Popov 150-200 meters).

Popov confirmed: in winter, especially in the North, indeed possible passage of snow charges, like storms, and so "snow storm nature". "Charges short" - the suddenness of their occurrence is difficult to predict the weather service, said pilot.

Radio aids landing at military airfields are not so clear-cut work, both civilian, there svetotehnicheskoe, and radio equipment is duplicated many times. "And we are working on the field almost airfields, and these difficulties affect. It is not excluded, the pilots in such critical situations can make mistakes ", - said Popov.

Preparation takes place only on a particular machine. For training use doubles (Double version of the single aircraft). "It's absolutely the same fighting vehicle, Only worth the extra place of work - the wheel Instructor, with a certain tolerance and the level of training, - said Popov. - It's like training vehicles - there is an additional braking pedal, clutch, only no steering, and we all have. Two absolutely identical control room ". What's in the long-range aviation (to which the Tu-22M3), that in the front planes must exist combat training, said Vladimir Popov.

After working with an instructor pilots allowed to fly solo, further reduce the minimum weather, When can fly, eg, at night, and only then - in critical conditions. The learning process is lengthy. Qualifications should regularly confirm - "one flight in difficult conditions is not guaranteed, that you fulfill it through the year with the same quality. Therefore, we repeat every three months - should be maintained natrenirovannosti ", - emphasizes the Distinguished Military Pilot of Russia.

In the case of this particular car - bomber Tu-22M3 - should be specifically taken into account, that this machine - heavy and difficult to pilot, - the authors point out Telegram channel "Look man in stripes". Fly on such a machine, "Only a well-trained, experienced, skilled pilots ".

According to the said channel-Telegram, Unfortunately, it should be stated: in an incident in Olenegorsk, looks like, the same reason, that of the collision Su-34 on Friday. speech, quite possibly, is an error in piloting technique. Cause of the accident - in the lack of training of pilots in combat regiments, The authors believe telegrams channel aforementioned. "We are reaping the consequences of twenty years of total collapse and underfunding of combat aircraft, - says expert. - There amateurism management staff in the organization, conduct and flight manual - and it, in its turn, a natural result of sitting on the ground without a flight in the past ".

It is not excluded and illiterate operational control. The essential difference between the civil and military aircraft - including, who makes the final decision about the landing of the aircraft. "The GA crew commander himself, at its own discretion decide - take it or go to the second round (the alternate)... It is quite another rule applies in the military, - explains the author Telegram channel "Look man in stripes". - Parade of teams flying head (Polish) - Honored officer. Position RP military aircraft have the right to borrow from the management team zamkomandira regiment and above any regular flight leader, which can be written off on the health of the pilot, too, only from the administrative board (t. it is. previously flown was the crew commander)».

The last point is important for understanding the causes of the disaster in Olenegorsk. "The commander of the crew of the Tu-22M3 sat at minimum weather and snow squalls are not just. He was given the go-ahead, that under these conditions equivalent to orders, - believes the author Telegram channel. - I gave the nod to the same RP. Or his assistant (PRP), who must be in the beginning of the band, next to the landing place - and his eyes see the same snow charge ".

In any case, several incidents mean "hot" start of the year for air safety (SBP) Aviation of the Armed Forces, It concludes the expert.