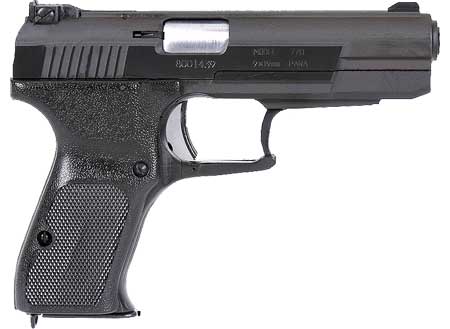 Pistol Model 77B (M77B) It was established at the state arms factories of the Chinese People's Republic, and exported through the state company NORINCO (China North Industries Corp). The basis of the M77V pistol lay 7.62mm pistol design Type 77, since the beginning of the 1980s was in service in China and a number of police units and divisions of the PLA. In contrast to the gun type 77, gunman weak enough patron 7.62h17mm Type 64, gun M77V is designed with a relatively powerful 9x19mm Parabellum cartridge, due to which automatic design had to be changed - instead of free M77V shutter gun uses delayed blowback gas-inhibition. Adopted PLA gun M77V apparently not taken, and intended mainly for export sales. Overall, this gun features a mildly mediocre (to say - bad) quality exterior finish, as well as the overall performance is quite rough. Using the device for cocking Hylevskogo with one hand and not the coup, since very long and strong finger is required for its use. Magazine capacity Only 9 cartridges also obviously small by today's standards. However, NORINCO also offers two further modifications M77V gun, different from his usual trigger guard - NP 20 (single in the store at 9 rounds) и NP 24 (DIL store on 15 rounds).

M77V pistol is based on automation with a fixed barrel and delayed blowback. Braking is performed shutter powder gases, bleed from the barrel into the gas cylinder, located under the barrel. The frame and the bolt is made of steel. The trigger mechanism, single action, udarnikovy. Lever fuse is located on the left side of the frame. The front part of the trigger guard is movable and has a one-way communication with the shutter. when you press your index finger shooting hand on the front of the trigger guard, she steps back, pulling the bolt and thus of its cocking (the so-called adaptation Hylevskogo, developed in Europe about 90 years ago, and almost immediately forgotten for the inconvenience). store single-row, seats 9 rounds.