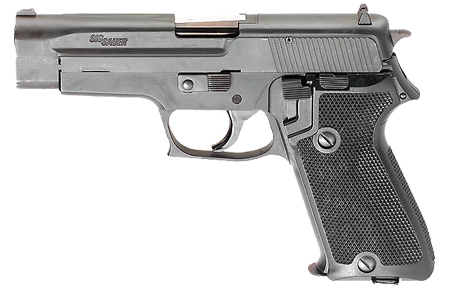 SigSauer P220 was born in 1975 year as a replacement took place at the Swiss army has and the German border guard gun Sig P210.

P210 differ excellent accuracy and reliability, but it was extremely expensive to produce - the market price has fluctuated around 1500-2000 US $. P220 P210 different from the shutter jacket, from stamped steel, Aluminum alloy frame, sovremnnymi more external forms. In addition to Switzerland, Adopted in Japan.

P220 is built on a modified Brauningovskoy scheme with a short recoil, when locking is performed by one large lugs on the barrel of the window for the extraction cartridges in the gate housing. USM largely inherits of the pre Sauer pistol 38H, and does not have an opt-in fuse. Instead, the left side of the frame rapolozhen lever safe descent hammer. Later in the design was introduced drummer lock.

Currently, the P220 release in Europe terminated, while US factories SigArms only modification .45 ACP caliber. It should be noted, that guns, destined for Europe, issued latch stores the lower portion of the handle, and pistols for the US market - a push-button latch shop at the bottom of the trigger guard. Besides, modern versions of P220 have zavtory, Stainless steel milled, and 2000 he appeared and option P220 frame, Stainless steel is also made (instead of aluminum alloy).

American version of a latch in the base store triggerguard

with a long barrel and adjustable sights