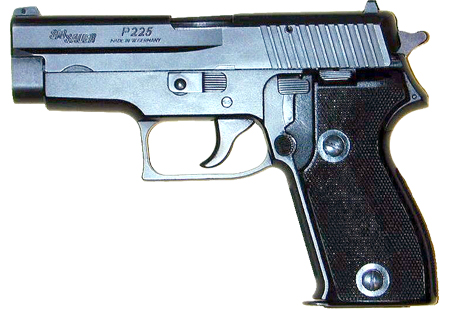 dual or double action only

R225 appeared in 1980 year and quickly became a very popular police and military weapons across Western Europe. He was adopted by the German Bundeswehr, Many police depratamentami Switzerland and Germany.

In fact, R225 is a compact version of the pistol P220 of the same company, and it has the same design on the basis of automatic short-stroke shutter, Shutter extruded casing and the frame of an aluminum alloy.

Pistol with a nomenclature has been developed based on the model 225 in the early 1980s, especially for the US Army, which is planned to adopt a new weapon. From U-225 new model is distinguished primarily by the increase in size and two-way latch store, calculated on 15 rounds. This gun is really almost did not get to the US Army, but at the last stage of testing - that is, "In the last centimeters of distance ', - it has bypassed "Beretta". A number of guns were purchased in 1991 by the British Special Airborne Service.

This compact weapon, appeared in 1988 year, It represents an improved version of the P-225 to store 13 rounds. It should be noted, that most of the details to pistols P-225, P-226 and P-228 are interchangeable, as, properly, and most of the accessories for them.