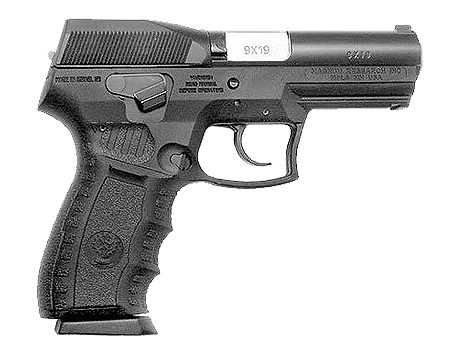 15 in the embodiment 9mm

Gun SP-21 «Barak» (Barak = Lightning in Hebrew) It was developed by the Israeli corporation Israel Military Industries (IMI) to 2002 year as a weapon, potentially capable of replacing Israel IMI Jericho pistols 941, and, perhaps, and Pistol Glock and SIG-Sauer. Future «Barak» pistol in the Israeli military until the fog, and meanwhile IMI began shipping this gun for export, market for civilian and police weapons. In Europe, this pistol is sold under its own name, and it is imported by Magnum Research in the United States under the designation SP-21.

Pistol «Barak» has a rather unusual appearance with a shutter, circular in cross-section in the front portion, and having a characteristic angular "bulge" in the rear. Frame arms made from high polymer. The closure is made of cast steel, and the rear part is hidden in a plastic "superstructure", the sides having a notch for cocking the shutter, and on the upper surface - pillar unregulated sight. USM trigger gun, double-acting. fuse double-sided, It located on the frame, and locks the trigger and the sear, allowing the carrying of weapons in "position 1" (round in the chamber, drummer cocked, weapons on guard). Such a way of wearing you can quickly open fire in single action mode, that is, with greater accuracy. Besides, in the construction of a separate button is safe descent hammers, located on top of the gate, before the whole. It also allows you to carry a gun with a cartridge in the chamber and the lowered hammer. Here, the first shot is performed samovzvodom (in double-action mode). This design USM provides enough flexibility in the use of weapons. Despite the rather unprepossessing (not to say ugly) view, Gun «Barak» is quite easy to hold and has a good ergonomics.

Automatic pistol «Barak» built by the scheme Browning, and uses energy efficiency in the short course of the trunk. Reducing stem carried shaped cutout in the tide under the barrel, its adhesion to the gate - through the window for the extraction cartridges. Feature gun design - that there are two separate return springs, located below and on the sides of the barrel, inside the gate.

On the frame under the barrel there is a standard rail for mounting accessories - laser sights or tactical lights.