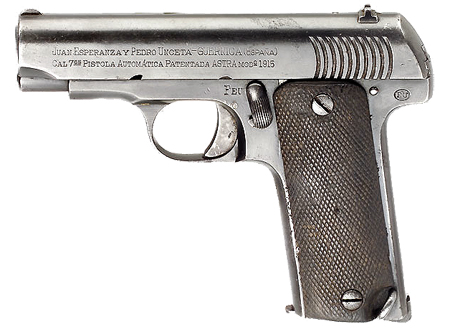 This first gun, which appeared under the name "Astra" is still in 1911 year (Although the trade mark was registered in November 1914 of the year), It represents nothing else, How to rename a gun "Victoria" caliber 6,35 or 7,65 mm - next, very mediocre, a copy of the "browning" 1903 of the year. Beginning with 1916 years for the gun appeared safety bar, and its production continued until 1918 of the year. Total, under different names («Astra», "Brunvig", «Fortuna», "Leston", "Muzeum", "Salsa" and "Victoria"), It was released about 300 thousands of these weapons. Some examples of the caliber 7,65 mm even delivered in 1915-1916. the French and the Italian Army.