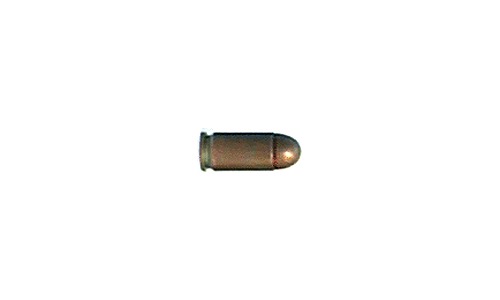 The length of the cartridge, mm

The length of the sleeve, mm

Cartridge developed BV. Semin. In the design of the cartridge as the basis of the CT sleeve chuck 7,62h25 mm was taken, "Trimmed" at the level 18 mm from the bottoms. This solution allowed, one side, used machine tool and measuring equipment for the TT rounds, and on the other - to exclude the possibility of using new cartridges for the Soviet weapons, remaining after the war in the hands of the population.

Ballistic characteristics of the cartridge to the superior cartridge 9h17, but yield cartridge 9x19 Steam. Valid caliber bullets turned 9,25 mm. By increasing the caliber stopping power remained at the level of the cartridge CT. A smaller muzzle energy allowed to use a simple and reliable automatic operation circuit blowback.

In the 50-60-ies under this cartridge were created pistols PM, APS in the USSR , P-64 in Poland , Hungary and some other countries. In the 90 years under him in Russia we have created a number of new handguns, revolvers, SMGs.

Initially, the cartridge was a brass sleeve, shell and bullet - lead core, pressed into red brass plated steel shell. At the moment the cartridge has a bimetallic sleeve and the steel core bullet with mushroom-shaped, prisoner in the lead shirt. designers VV. Trunov and PF. Sazonov also developed a cartridge with a tracer bullet.

Bullet with steel core in the lead shirt gives lead economy and increases the ability to penetrate non-metallic barrier (tree, soft body armor). At the same time in contact with the dense barrier (Concrete, steel) bullet shell collapses, and the core, The round shape of the head part, jumps like a ball. As a result, such a bullet can pierce body armor, having steel plates. Besides, reduced iron core bullets weight, which worsened its ballistic characteristics compared with a lead core bullet having.

Later designers in. AT. Trunov and P. F. Sazonov was designed by 9-mm cartridge with a tracer bullet.

9 mm cartridge with a tracer bullet (PT) produced by the NCA Novosibirsk. Intended for shooting from all weapons, that use regular cartridges for Makarov pistol. Bullet tracer action allows adjustment of the fire and have a psychological impact(cartridge weight 9,6 g, 5,7g bullet weight)

Employees KBP developed cartridge PBM 9x18, which at a distance of bullet speed 10 m from the muzzle of 470-480 m / s. Wherein, by reducing the weight of the bullet, pulse recoil momentum is practically equivalent to the recoil when firing regular 9mm pistol cartridge PM. Bullet cartridge 9x18 MSDS is soft point, with bared steel core and aluminum jacket, fitting the core from the sides. Shallow bullet mass at a high initial speed (compared with the standard cartridge) allowed at ranges up to 25 meters to increase its kinetic energy when encountering an obstacle. Began field testing cartridge PBM 9x18 showed him a distinct advantage in virtually all combat characteristics over previously proposed options. The bullet pierces the cartridge developed a combined-arms protective vest 6B5-12 model at a distance 30 meters with a probability 100%, a 5-mm steel sheet at a distance 15 meters with a probability 80%. The result is impressive, since none of the newly developed bullets for Makarov pistol cartridge did not show such a high combat performance.