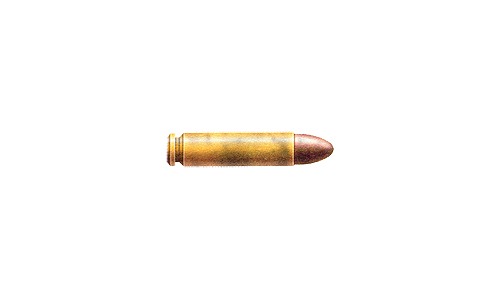 This cartridge was developed in 1940 Winchester, the company's designers commissioned by the American infantry-based management of hunting cartridges Winchester 51.32. Simultaneously with the cartridge has been designed and automatic carbine M1 Karbayn.Eto weapons were to be used when shooting at a greater distance, than pistols and assault rifles, to some extent, filling the gap between these tactical weapons and infantry rifle. Only in late October 1941 carabiner year gained the status of a staff weapon.

Used tactically right, He has proved to be a good side and produced a huge kolichestve.Reshayuschim factor for this was the low weight of the rifle, ease of use and a small force of bestowal, not least due to the cartridge design. During the Second World War, the carbine was improved. Now it exists in the form of model M1 A1, high-velocity weapons M2 and M3.

Carbine cartridge US Karbayn .30, producible, as a weapon, a lot, It can be called a first short chuck, officially put into service. Due to the sighting range, of equal 250 m, and the effective range of the total 2000 m, this cartridge match the tactical requirements of the time. Ammunition of this type are produced today.

Due to the unsuccessful bullet shape its speed drops sharply in flight: across 300 m speed decreases to 300 m / s, and energy to 317 J.. By its energy is close to our patron 5.45x39. However, thanks to the peculiarities of the cartridge has gained popularity in the police, tk. I became not dangerous at long distances, what is required when shooting in.