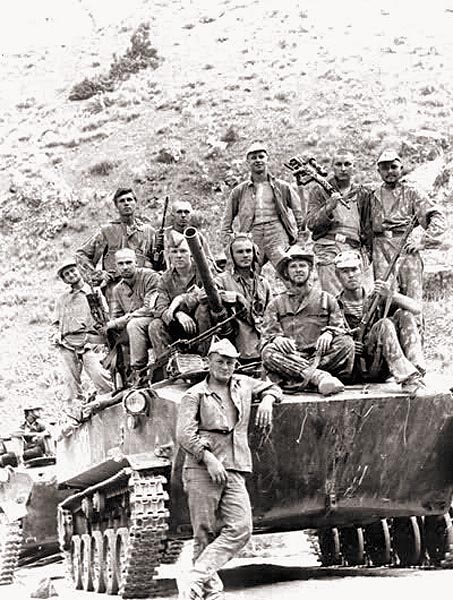 February 1986 year for the Kandahar Special Forces was rather hot. Less than a month managed to prepare and conduct two special operation to seize and eliminate the major bases of militants in their area of ​​responsibility. However, only one person was killed in the squad and ten injured.

Property information was obtained from aerial surveys in the beginning of February. Pilots were found moving from the Pakistan border to the west, deep into Kandahar province, a large number of beasts of burden, loaded with bales. Tracing the path of the caravans, pilots established, that they are all moving in the direction of the gorge in the mountains Hadigar.

The commander of the 238 th Aviation Regiment Colonel Rutskoi tried to conduct exploration of the gorge on the Su-25 aircraft, but it was fired from a large-caliber anti-aircraft installations.

About this fact, he reported to the chief of staff of the Turkestan Military District, Lieutenant General Gusev, who ordered the strike bombing assault against (BAS) the gorge. When you try to re-conduct air reconnaissance planes gorge again under fire. This led to the conclusion that, that the objectives in the area are not suppressed. To solve this problem through the gorge BAS applied at regular intervals for two days.

After completion bombardment to verify its results to the area has been directed Inspection group headed by senior Lt. A. Parshin. The challenge for the landing was not intended. However, under cover of attack helicopters, Using the element of surprise, Group landed on the edge of the gorge at the outpost and captured anti-tank mines and packaging of ammunition for small arms. During the evacuation of the group is one of the Mi-24 helicopter was damaged by the fire of anti-aircraft gun installations, but independently arrived at the airport.

For their arbitrariness Parshin received disciplinary action from the captain of the detachment commander S.Bohana. However, the extracted information group helped establish, what, although the object was subjected to prolonged bombing, it continues to operate successfully. We also managed to establish, that cover the valley four air defense positions, having in its composition of 2-3 large-caliber machine gun DSK. Long positions BOHN, well equipped in engineering terms, placed on the crests of ridges, two on each side of the gorge. These positions were key.

In this regard, it was decided to carry out the capture of the gorge in the mountains Hadigar.

The idea was developed by staff 173 ooSpN. For his performance SWAT team had to create a number ROSpN 300 as part of the vanguard - BG number 310 and four assault teams.

Command ROSpN number 300 was captain of Bohan. Their forces and resources to carry out the operation in Kandahar detachment was not enough. Therefore it was necessary to involve the neighboring 370 ooSpN to form a reserve of two groups. But even the involvement of these units are not allowed to create the necessary grouping of forces. For this purpose it was decided to use gives strength and means 70 omsbr as part of an airborne assault battalion, tank battalion and artillery battalion howitzer D-30.

A number of serious problems in the course of the operation was to tackle aviation. To do this, from 280 ORP appointed squadron of Mi-8Mt, a squadron of Mi-24, and from 238 OSAP - zveno Su-25.

In accordance with the concept of the vanguard of four BMP-2 with troops from the 1st Company 173 ooSpN under the command of Deputy Battalion Commander Captain K.Nevzorova I had, moving column headed military equipment 70 omsʙr, ensure its progress on the planned route through the villages Tahtapul, Bar-Mel, Nargali, Grakalay-macchiato. TO 8.00 column were instructed to come to gorge the mountains Hadigar.

Affixed forces under the command of the deputy commander 70 Nikolenko omsbr lieutenant colonel led the vanguard of the movement started in 00.00 5 February 1986 , in the direction of the mountains on the specified route Hadigar.

Air Assault Battalion was to occupy the initial positions in readiness to support the actions of groups of special purpose.

Squadron Mi-24 and Su two link-25 8.30 to 9.00 BAS planning application for positions of air defense sites and landing special forces with the purpose to inflict maximum fire damage and prevent counter Mujahideen air defense at the stage of landing.

Immediately after the four-level BAS Mi-8Mt with troops on board had to go to the intended landing site and 09.05 complete a landing.

Four groups of special purpose had to parachute to the specified site for, to bold and decisive actions to destroy the ANC calculations, capture their positions and cause fire damage to the enemy, located in the valley.

Air Assault Battalion was to enter the fortified area after commandos capture and to inspect elements of its infrastructure under the cover of fire RGSpN.

capture. 4 February 1986 year, Lieutenant General Gusev, who led the operation, I set a task to all participants.

When setting targets, special attention was paid to the stealth action and interaction. To this end, Lieutenant General Gusev drew particular attention to the order of communication and work in a common network.

To ensure secrecy 70 omsbr starts pulling column combat equipment dusk, rather than in the daytime, as it was usually.

At midnight the vanguard of the movement began. Behind him popped column units 70 omsʙr. Initially, she was moving on the highway to Kandahar - Chaman towards Pakistan. The driver of the advanced detachment, had extensive experience night driving, riding, not including the headlights. The rest of the column was with headlights.

After going around 50 kilometers, the vanguard turned left off the road and headed north on rough terrain. An important role in the implementation of the advanced detachment of the problem played an excellent knowledge of the area of ​​operations senior lieutenant S.Krivenko.

AT 7.40 the vanguard arrived at the destination, what was reported on the CBU. From there said, that the organization of the advanced manual control and direct the course of the operation commander, flew 173 ooSpN captain Bohan. AT 8.00 It began shelling the positions of the Mujahideen. In strict accordance with the concept of operation in 8.30 shelling stopped, and began working Aviation. By this time the captain came and Bohan.

AT 9.00 immediately after the last BAS eight Mi-8Mt with troops on board, taking advantage of, that the air defense the calculations at that time were in shelters, freely carried out a landing.

There are four groups of special purpose were planted, who crushed the weak resistance of the enemy in a short battle and captured key positions in a fortified area of ​​"Mountain Hadigar". part of the rebels, It was in the valley, It was destroyed, and some hastily moved in a southeasterly direction. Fight stopped to 9.30. After that, air assault battalion was commanded to enter the gorge and make it a thorough inspection to identify warehouses, positions and other infrastructure elements fortified. 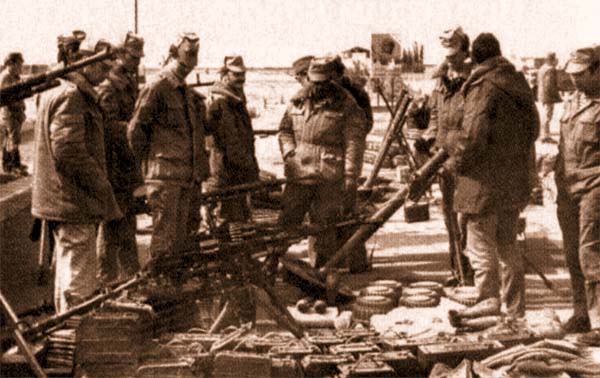 However, information about the, fortified area that has captured commandos, to the company commanders had not been communicated. Therefore, the battalion began to act, As usual in the capture: one company has gone on the left slope, other human, and another company started to move on the bottom of the gorge. General frequency of interaction, as well as signals of mutual recognition to company commanders and platoon leaders were also not brought. Because of this company, which was on the right slope encountered a group, He commanded by Lieutenant Marchenko.

Marines, I find people on the mountain, We took them for the enemy and opened fire. As a result, injured one of the scouts. No attempt to communicate by radio, nor the filing of light signals "I'm a 'no to no avail. At scouts barrage of fire. Special forces caught up with the advanced CP requested to get in touch with the commander of an airborne assault battalion. But he went off the air and did not answer requests.

When the Marines came closer, they were attacked ... choice Russian obscenities. It finally was able to stop and make them think. After a while they asked: "Who are you?"When understood, it's special forces, asked with surprise: "What are you doing here?"They have responded in the most accessible form, and then made contact with her and warn, that operates at altitudes as special forces. Only after that the soldiers came down and started inspection and unloading of the gorge.

There were so many trophies, the first day to load them on the car failed. In order to eliminate the possibility of the return of the Mujahideen in the gorge under the cover of darkness in the occupied positions three Special Forces teams were left.

However, this information command 70 omsbr also brought to his officers. As a result, about 21.00 the position of one of the groups under fire from howitzers D-30. By sheer luck nobody was hurt. Attempt to contact the gunners on the radio for a ceasefire came to nothing lead. Only the personal intervention of the captain Bohan, arrived on the armor, It helped stop the fire.

The next day resumed the export of trophies. AT 17.00 Column of military equipment began moving to the point of permanent deployment of slightly modified route. On the morning of the captured trophies were exhibited on the square 70 omsbr to headquarters building.

Lt. Gen. Gusev held parsing operation, noting the clear and well-coordinated actions of special forces, and weak organization of actions in motorized brigade, which led to the only loss on the part of Soviet troops -raneniyu scout one of RGSpN.

As reported agents, fortified area "Hadigar Mountain» was recently created by the Mujahideen to counter the formation of "general historical materialism", jumping to the side of the government and his party, stationed in the mountains Adigar, Saharan Hadigar mountains on 10-15 kilometers. Destruction of the Mujahideen base for a long time to stabilize the situation in the region.

In conclusion, the analysis operations, Lieutenant General Gusev said, that such practices should be developed, and set the task of the master outline Bokhanov capture the next object and prepare it to the next operation to the arrival. Bohan immediately reported, that this object is - the base area Vsatichignay. The commander of the Turkestan Military District gave to training two weeks operation.