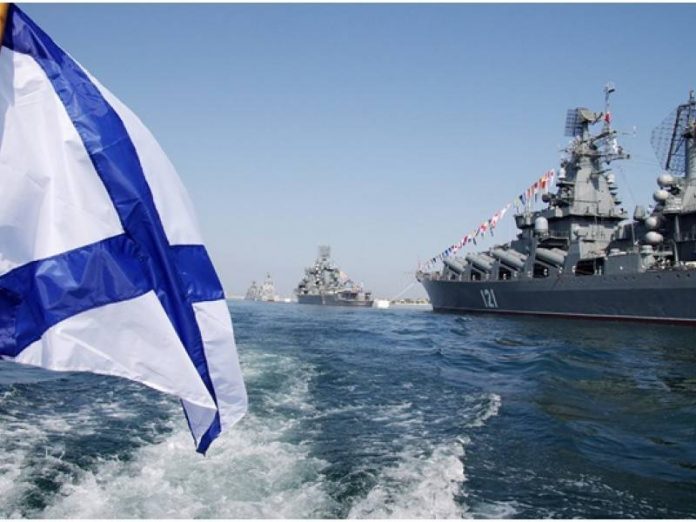 Apostle Andrew, one of the twelve disciples of Jesus Christ, was crucified according to the legend it is on an oblique cross. Apostle Andrew went to preach on a number of countries, that fell to him by lot. Andrew preached in Bithynia, Ponte, cutaway, Macedonia, Thessaly, Hellas, Achaia and Scythia. He became the first preacher of Christianity in the Black Sea coast, and listened to his sailors and fishermen.

Authorities met him very unfriendly, and in Sinop, he was severely tortured. It is believed, that the apostle visited on the territory of modern Abkhazia, Adygea and Ossetia, and then returned to Byzantium, where he also continued his preaching, He founded the Church. Then Andrew was captured and met his death in the city of Patras, that in Greece. saltire, became the instrument of execution Andrew, in memory of St. Andrew the Apostle called. on the spot, where he was crucified Andrew, scored source. Now Patras is very beautiful cathedral of St. Andrew, dedicated to the apostle. 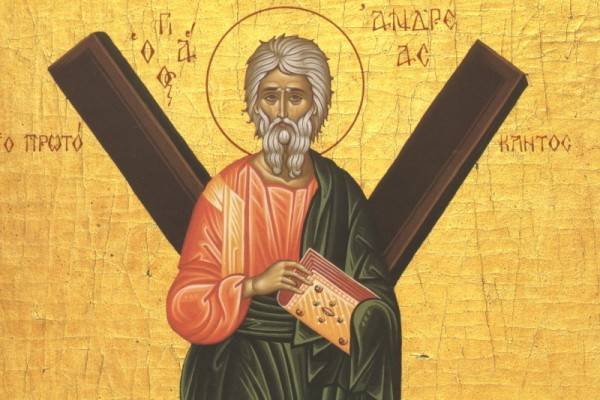 Birth flag associated with oblique cross events later ages. AT 832 g. Scots and Picts of Scotland fought with England. Angus King II vow, that if his army of Scots and Picts wins, he shall pronounce the Apostle Andrew the patron saint of Scotland. And indeed, victory over England was won, which convinced the Scots and Picts - he helped himself Andrew. The flag of Scotland became white saltire on a blue cloth.

When in 1606 g. personal union of England and Scotland was concluded, saltire became parts of the United States flag. It is present on the national flag of Great Britain, if we look, and now.

if this flag is influenced Peter I? Likely, because England had already been a major sea power, one of the strongest in the world. On the other hand, Andrew was considered the patron saint of Russia and. there was a tradition, that he had traveled through the lands, which subsequently appeared Russian State, and preached the doctrine of Christ here. Of course, it is only a legend. After all, ancient vaults 1039 year and the initial set of 1095 of the year, "Reading about Boris and Gleb 'claim, that Russia apostles of Jesus Christ did not go. Nevertheless, XI century Apostle Andrew was the patron of the Russian Land. Therefore, the choice of Peter was well-founded and, Furthermore, very accurate.

Peter I knew perfectly well the value of symbols to strengthen the unity of the state, to raise the morale of the army and navy. But such symbols required, which would have forced them to revere any Russian person. It is best suited for this role just symbols, associated with the saints. Andrew was one of the most revered Christian saints in Russia and Peter understood this perfectly, when in 1699 , approved the flag with a blue diagonal cross on a white cloth Russian Navy flag.

known, that the emperor, pays great attention to the construction and strengthening of the fleet, personally I worked on a sketch of the new flag. He tried at least eight options. They tried to use as a sea of ​​flags, while in 1710 , the emperor did not stop the choice on the final version - that the white flag with a blue diagonal cross. Nevertheless, Only the ship's charter 1720 The exact specifications of the flag were identified - "white flag, across that has a blue St. Andrew's cross, whom he christened Russia». 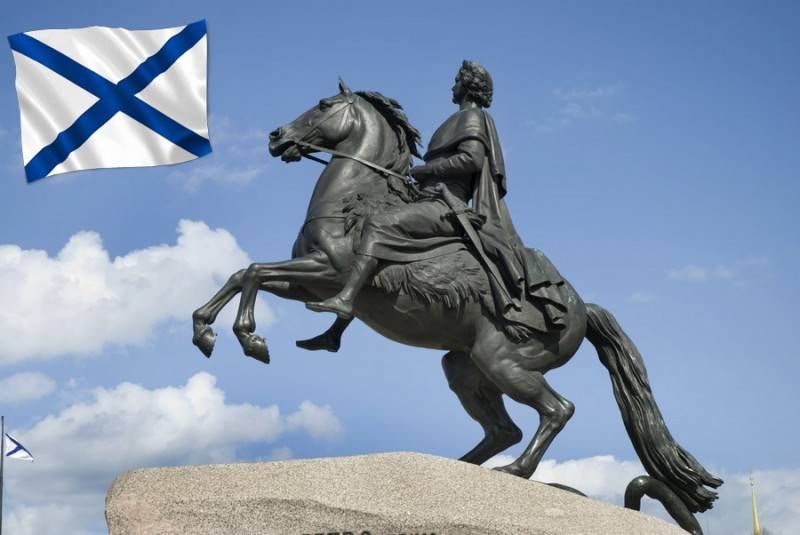 Already in the XVIII century St. Andrew's flag was covered with the glory of naval battles, in which it participated for the ships of the Russian Navy. Numerous Russian-Turkish War, expeditions to distant countries - all this took place for the fleet under the flag of St. Andrew. Naturally, that sailors veneration of St. Andrew's flag has become a real tradition. He turned into the main shrine of Russian sailors, his pride.

Typically Andrew flag, lifted over the ship, It was a four-meter panel. This size was not accidental - a large banner in the wind make noise, It frightens the enemy and former kind of psychological weapon. You can imagine, as "roaring" St. Andrew's Russian squadron banners, which included a large number of ships! Really, the enemy was not surprising frightened of such fearsome roar. 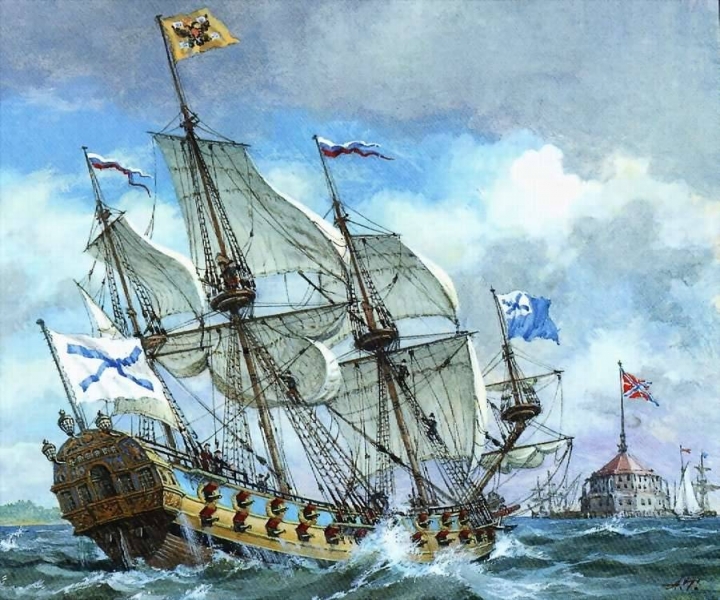 With the development of the Russian Navy, his participation in more and more wars, at 1819 It was adopted St George flag admiral, all represent the same Andrew flag, in the center of which lies a red heraldic shield, and on it - the image of St. George, It is also considered one of the patrons of the soldiers of the Russian Land. Get a flag of the ship's crew was considered a great honor. His awarded for outstanding military merit, for example - for courage, manifested in the protection of St. Andrew's flag during a sea battle.

by the way, St. Andrew's flag as the fleet was supposed to protect the shrine for life, and death. sailors died, but refused to release the sacred symbol of the Russian fleet. Only twice in the history of Russian ships voluntarily lowered the flag of St. Andrew. The first time it was 11 May 1829 of the year. During the next Russian-Turkish war frigate "Raphael", He commanded by Captain 2nd Rank Semen Stroynikov, He collided with a Turkish squadron of 15 ships. Capt no hotel, to his sailors and officers were killed, therefore it decided to lower the flag and to hand over the ship.

Emperor Nicholas I belonged to the military glory very jealous. So when it became known for the infamous deed fleet, frigate "Raphael" was prescribed, if he is suddenly seized by Russian sailors, burn. Captain 2nd Rank Semen Stroynikov was demoted to ordinary sailors, stripped of awards and titles. The Emperor forbade Semyon Stroinikova marry, that he gave Russia "the offspring of a coward". true, by the time Simon Stroynikov was already the father of two sons. And they, Interestingly, not just entered the naval service, but both rose to the rank of Rear Admiral.

With regard to the frigate "Raphael", its really a fate, prescribed by Emperor Nicholas I. after 24 years after his surrender to the Turks, during the Battle of Sinop, frigate was burned. The order of the emperor performed the famous Admiral Pavel Nakhimov. "Raphael," the name given banned ships of the Russian Navy for ever.

The second sad story occurred during the Battle of Tsushima. Then the Second Pacific Squadron, is confronted with the superior forces of the Japanese fleet, He was forced to surrender. Rear-Admiral Nikolai Nebogatov, Jr. served as the flagship of the fleet and replace the wounded commander Vice Admiral Rozhdestvensky, I decided to surrender. He also hoped to save the lives of the remaining officers and sailors. St. Andrew's flags were lowered on ships, surrendered to the Japanese.

Rear Admiral Nebogatov, has taken the decision on the surrender of the squadron, It could save lives 2280 Russian sailors - officers, conductors and sailors. These were real people - someone's father, brothers, sons. But this kind of action the Admiral did not appreciate the staff officers in St. Petersburg and the authorities of the Russian Empire, who felt concern for the preservation of the lives of their subordinates banal cowardice. When, after the Peace of Portsmouth, Rear Admiral Nebogatov was released from captivity and returned to Russia, He was stripped of his rank, We put on trial in December 1906 They were sentenced to death. But the decree of the sentence by a higher rear admiral was replaced by a ten-year sentence in the fortress, and another 25 months he was released, received a pardon.

But there was in the history of the Russian fleet and the third case, when St. Andrew's flags were lowered on Russian ships. AT 1917 St. Andrew's flag, the flag ceased to be the Russian fleet, and 1924 he was voluntarily lowered the ships of the Russian squadron in the port of Bizerte on the African coast of the Mediterranean Sea. This was due to the fact, France, which then belonged to the port of Bizerte, officially recognized the Soviet Union and, Consequently, Russian ships were simply forced to obey the orders of the French colonial authorities.

With the revolutionary events, and St. Andrew's flag is associated and one very interesting story. AT 1920 year minesweeper "Whaler", He commanded by Lieutenant Estonian Academy Fersman, He retired from Estonia, fearing capture Bolsheviks. minesweeper commander ordered to raise the flag of St. Andrew, then he went through Europe toward Crimean, intending to join the troops of Baron Wrangel.

but, when 27 February ship arrived in Copenhagen, where there was a British squadron, its command ordered Fersman pull flag Andrew. The commander of the British squadron stressed, that London no longer recognizes the flag of St. Andrew. But Lieutenant Fersman refused to obey the orders of the British, Stressing, that is ready to enter into an unequal battle, though his ship had only two guns.

Quite possibly, that this contradictory situation would be resolved by armed conflict and the death of Russian sailors in an unequal collision with a British squadron, but intervened Empress Maria Feodorovna, which by happy coincidence it was at this time in Copenhagen. She appealed to the British leadership and achieved not only for the further passage of the ship, but its coal and food supplies. As a result, "Whaler" still got to Sevastopol, and then, with the rest of the squadron Wrangel, He stepped in Bizerte. That's what was one of the last battles of the old sailors of the Russian fleet for Saint Andrew's flag for them.

In the Soviet Union for the Navy it was adopted a completely different flag, built on the basis of the traditional Soviet symbols - the hammer, hammer, a red star. In the history of the use of St. Andrew's flag came more than seventy-year delay, darkened very unseemly events. During the Great Patriotic War flag of St. Andrew became used as a symbol of "Russian Liberation Army" of General Andrei Vlasov, to fight against the Soviet Union on the side of Nazi Germany. St. Andrew's flag was depicted on the chevron uniforms ROA and wore it on his hand traitors committed crimes against his own people, serving the Fuhrer - bloody executioner of the Russian Land. Nevertheless, knowledgeable people, and after the war were well aware, vlasovschina that could not overshadow the long history of St. Andrew's flag as a symbol of the heroic Russian fleet.

With all due respect to the flag of the Soviet Navy, and the heroic deeds, that underneath commit Soviet sailors during the Great Patriotic War, in military campaigns and operations of the postwar period, we can not agree with the, that the return of St. Andrew's flag as a symbol of the Russian fleet was a real revival of traditions, and today the Russian sailors newly appreciated and loved Andrew's flag, faithful to him. As said Russian captain when joining their ships into battle - "God is with us, and St. Andrew's flag!»