The market in the siege of Leningrad: testimonies of survivors. Part 1 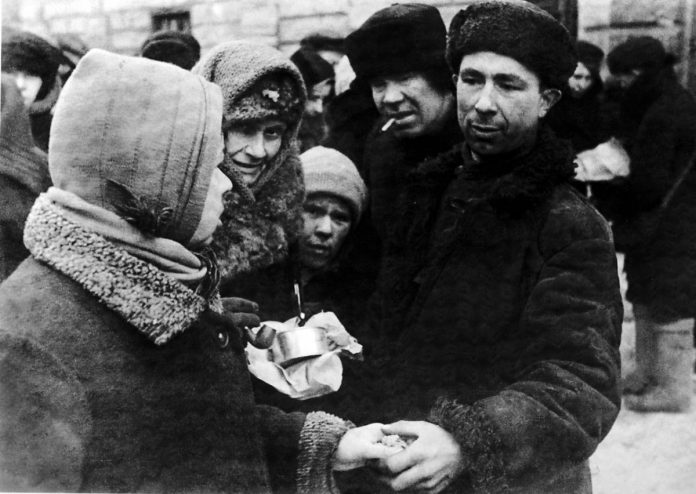 Money as such is almost worthless. Buy bread on the market of Leningrad described period for rubles was virtually impossible. About two-thirds of the survivors of the siege of Leningrad indicated in special questionnaires, that the power source, by which they survived, products were, traded on the market at things.

Eyewitness allows you to make an impression on the markets in the besieged city: «the market itself is closed. Trade goes along Forge Lane, by Marat to the Vladimir area and further along the Great Moscow ... Back and forth walking human skeletons, crocked knows what, hanging from them in assorted clothes. They have taken out all here, that could, with one desire - to exchange for food».

Impressions of the Hay Market, causing frightened, divided into one of blokadnits: «Hay market is very different from the small bazaar on Vladimir. And not only his value: it is located on a large area, snow, trampled and compacted by many feet. Notable for he and the crowds, Not at all like a bunch of dystrophic sluggish Leningrad with expensive trifles in the hands of, worthless in times of famine - no bread was given to them. There were striking is now such an unprecedented "business spirit" and a large number of dense, warmly dressed people, rapid eye, fast movements, loud voices. When they spoke, their mouths steamed, in peacetime! In dystrophic was so transparent, inconspicuous». 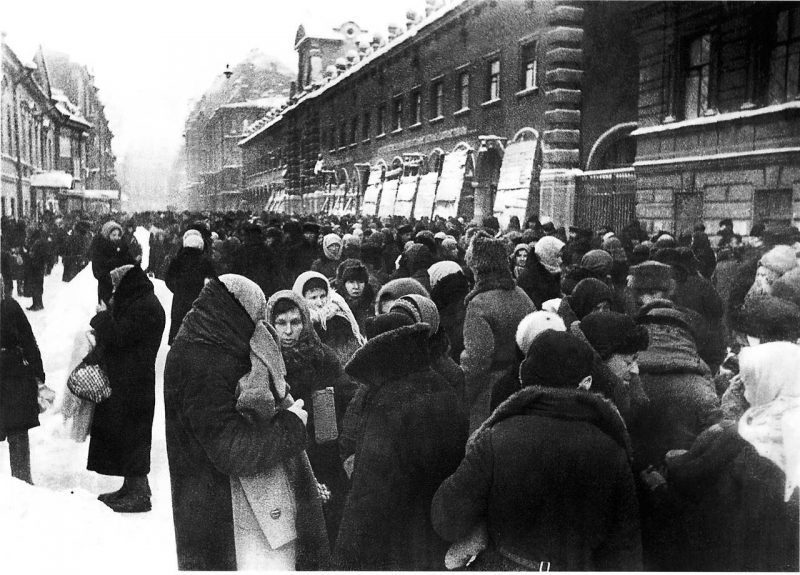 A. A. Gifts writes in his memoirs: «Indoor Hay market could not accommodate all the trading and changing, buy and simply "wishing", and hungry staged their, "Hungry" market on the square. It was not a sale of 20-Century, and primitive, how at the dawn of humanity, exchange of goods and products. Exhausted by hunger and disease, deafened by bombing people adapt to their sodden mind all human relationships, and above all the trade, its permissible and impermissible Soviet authorities during the blockade as».

Blockade winter drove the Haymarket "hungry" market is not only a crowd of dying cynical and well-fed merchants, but also a lot of criminals and a notorious thugs from the neighborhood. This often took the form of life of tragedy, When people lose everything in the hands of spoilers, and sometimes lost their lives.

Numerous eyewitness allow to make one very important observation - the term "seller" and "buyer" often involve the same traders. In this regard, one of the Leningrad recalls:

"Customers - those, who changed part of its sugar ration of butter or meat, others searched in vain for bread rice for ill close, starve, to congee, acting miraculously, stop new disease - diarrhea hungry ".

B.M. Mikhailov says the opposite: "Buyers others. they cheeky, zyrkaet furtively around and keep your hands in the bosom - where the bread or sugar, maybe, piece of meat. I can not buy the meat - if not human flesh? I go to the "buyer".
- Sell! - whether to ask, whether begging him.
- And you've got that?
I quickly revealed before him all his "wealth". He delves into the bag with disgust.
- The clock has?
- No.
- A gold? - "Bread" turns away and goes ".

The overwhelming majority of the participants in the blockade markets transactions were citizens, are prepared soldering parasitical, do not give a chance for survival. But they come for the auxiliary power supply and military, Working with a fairly serious nutritional standards, that, but, allowed only to support life. Of course, wishing to quench a burning hunger or save loved ones from the deadly malnutrition were significantly more holders of food. This led to the emergence of speculators of all stripes, who just captured the city. Eyewitnesses wreak havoc write:

"Ordinary people suddenly discovered, they have little to do with traders, suddenly emerged in the Haymarket Square. Some characters - straight from the pages of Dostoevsky or Kuprina. robbers, the thieves, the killers, members of bandit gangs roamed the streets of Leningrad and, it seemed, We bought a lot of power, when the night. Cannibals and their accomplices. thick, slippery, with a steely gaze inexorably, calculating. The most terrible personality these days, men and women". But they had to be careful in their trading activities, when he was holding a loaf of bread - the incredible value of those days. "The market is usually sold bread, sometimes the whole rolls. But sellers were removed it with caution, loaf held tightly and hidden under his coat. They are not afraid of the police, they are desperately afraid of thieves and bandits hungry, able at any time to remove the Finnish knife or a blow to the head, take away the bread-and-run. " 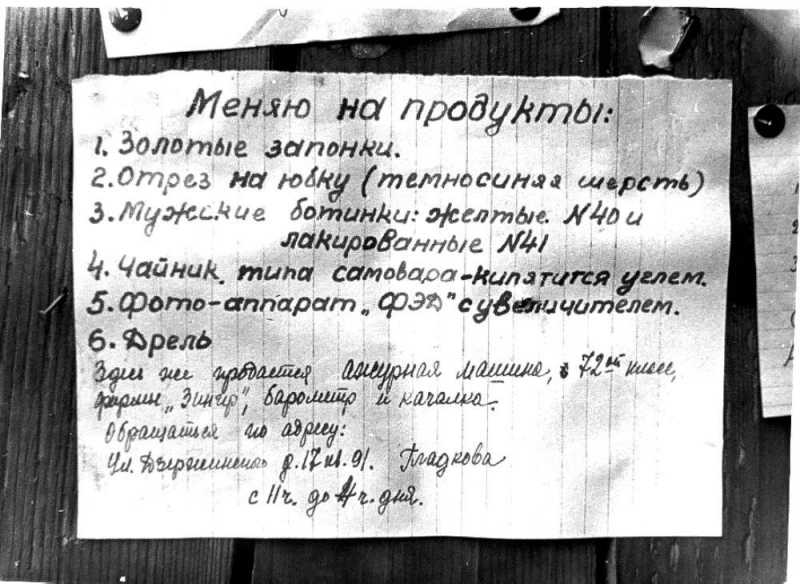 The following members of the ruthless lives sales process were soldiers, are the most desirable trading partners of Leningrad markets. Usually they were the most secured and solvent, but with caution appears on the market, as it is strictly punished by superiors.

War correspondent P. n. Luknitsky in this regard resulted in an episode: "The streets are increasingly concerned my shoulder woman: "Comrade Military, wine you do not need?"And for a short: "Not!"- timid excuse: "I thought no bread to barter, g to at least two hundred, three hundred ... "Another describes the case Blokadnik, when his father, returning from the front, I was forced to wear civilian clothes, to exchange preserves and concentrates its ration of vodka.

Terrible were the characters, which Leningrad attributed to human flesh eater and sellers. "At the Haymarket people walked through the crowd, dreamily. pale, as ghosts, thin, shadows ... Only sometimes appear suddenly a man or a woman with a face full, ruddy, some soft and hard at the same time. The crowd shuddered with disgust. spoke, it cannibals ". This was a terrible time were born the terrible memories:

«At Haymarket Square selling burgers. Sellers said, it's horse meat. But I have not seen a lot of time in not only the horses, but cats. We have not flown over the city of the birds».

E.I. Irinarhova writes: «At Haymarket Square watched: Do not trade suspicious meatballs or something else. Such goods seized, and merchants were taken away».

AND A. Fissenko describes the case, how he could not satisfy his hunger broth, who had a peculiar odor and a sweet taste - father poured a pot full in the trash. The girl's mother unknowingly bartered a piece of human flesh on a wedding ring. Different sources give different data on the number of cannibals in the blockade of Leningrad, but, as calculated by the internal affairs bodies, only 0,4% criminals confessed terrible fisheries. One of them told, they killed my father sleeping, flay carcasses, salted meat and exchanged for products. And sometimes themselves eaten. 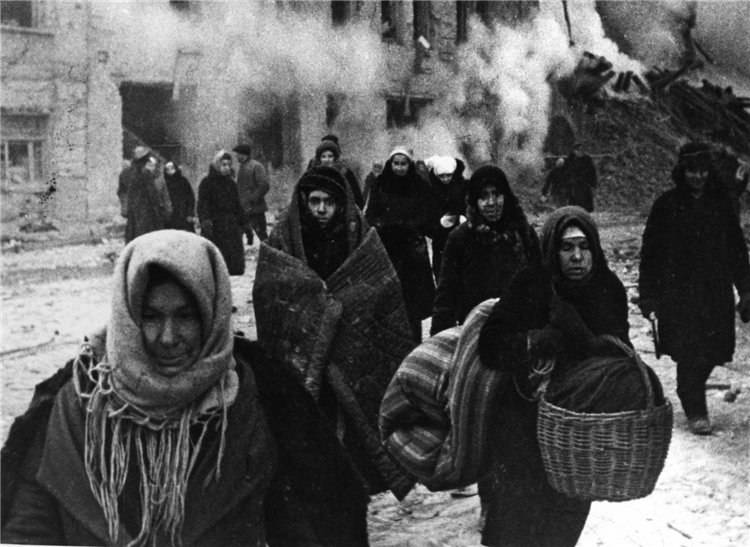 Acute bundle residents in living standards caused a burning hatred for the owners of illegally acquired products. Survivors of the siege written: "Having a cereal or a bag of flour, you can become a wealthy person. And like swine bred in abundance in the dying town ". "Leaves a lot. Evacuation - also shelter speculators: for the removal of car - 3000 rubles per head, by plane - 6000 rubles. earn undertakers, earn jackals. Speculators and blatmeystery seem to me not only as corpse flies. how disgusting!»

An employee of the plant. Stalin BA. Belov records in his diary:

«People walk like shadows, some swollen from hunger, others - obese theft of other people's stomachs. We stayed one eye, skin and bones, and a few days of life, others were whole furnished apartments, and wardrobes full of clothes. To War - who profit. This saying is now in vogue. Some people go to the market to buy a two hundred grams of bread or barter food for the last tights, others visit thrift shops, from there go to the porcelain vases, servizami, bellows - think long live. some frayed, worn out, dilapidated, how to pay, and body, other shiny fat and flaunt silks.»