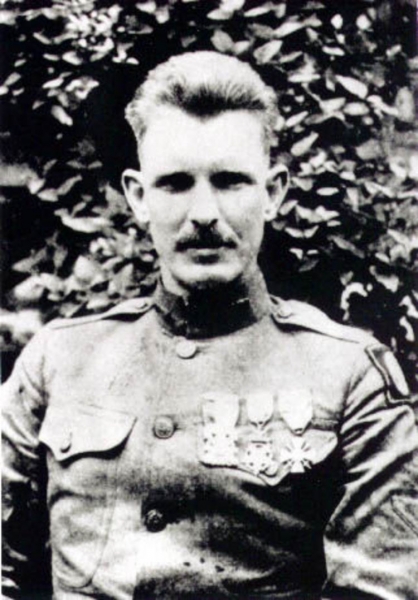 The story still argue.
Profit or fake? To begin with - the plot, who enthusiastically retell
Various media resources, Firstly, Internet's. I promise this: if
would 28 September ordinary British Army Henry Tandy shot wounded in
German soldier, I hit him on the fly, the history of the twentieth century would have gone
different path. Yes there century, all mankind and for all.

assumptions bottom line is, that this
German soldier was none other than the corporal of the 16th Bavarian Infantry Regiment
Adolf Gitler. No direct evidence does not lead, but attempts
to present the story as historical fact by circumstantial "evidence"
abound. there is – Again unsubstantiated – statement, what in 1940
Tandy was himself in an interview with a British newspaper said that, that "took him at gunpoint, but could not kill
wounded man, so let him go”. On that German soldiers
I nodded gratefully. true, nowhere to be found references to the name of the newspaper and
issue number.

Elsewhere you can read, what
all happened back in 1914 year. Details are the same. Tired and wounded German soldiers
I wandered in the firing line, and Tandy did not shoot. In fact Tandy, and that
real person, at the beginning of the war passed from the battlefield wounded comrade during
first Iprskogo battle. This episode will be displayed on the web Italian military
artist Fortunino Matane. There is a story about the visit of British Prime Minister Neville
Chamberlain to Hitler's residence in Bavaria 1938 year, where Chancellor
showed a visitor whether the original, whether a copy of the picture and, pointing to
soldier with a wounded soldier on his shoulders, He claimed, that this little man of his
not shoot. Furthermore, Führer allegedly asked the Prime Minister for
return to London to call Tandy and give him thanks. All
contact the British Prime Minister carefully recorded. In the archives there
acknowledgment, Chamberlain called Tandy or communicate with him in any other
way. Although the place of residence of the former soldier was not a secret. He lived in
Coventry, on Cole Street, 22 and served in the car manufacturing company.
Link to the, that the prime minister of a great country worthless to communicate with some Soldier
working. Tandy was not just an ordinary, and the most famous ordinary. He was
Personnel with a soldier 1910 of the year, I went through the First World War and received the Ten Martial
awards. Including the highest military award of the empire - the Victoria Cross. Hitler
I could well see photos Tandi in any British newspaper, as the ceremony
monarch handing someone from the HF subjects covered by all media. The decree was signed
14 December 1918 of the year, a ceremony at Buckingham Palace, a year later -
17 December 1919-th.

From the archives of the 5th Duke of Wellington
Infantry Regiment known, what 28 September 1918 years Thandi accomplished the feat, for
who was awarded the HF. It happened near the town of Marcoing, what in 7-8
kilometers southwest of Cambrai. Tandy fire machine gun Lewis suppressed
emplacement of the enemy, then under fire along with eight companions set
temporary flooring on the bridge. Brave nine had been surrounded and entered into
dogfight. The prisoner was taken over 20 German soldiers. Tandy once
once he was wounded, but only 4 October, When the battle was over, I agreed
go to hospital.

What's confusing in history
"Looking for" Tandy with Hitler? After a short break in September 1918 of the year
regiment, which served the future Fuhrer, I went to Flanders, under Ieper. And between
Marcoing Ypres and a hundred kilometers. Well, a bit less. According to others
Corporal was poisoned by gases from the exploding number of chemical shells. But
this happened 14 October, under the village La Montaigne. In France, these two. One -
on the Atlantic coast near Nantes. There's a war and did not smell. another in
11 km from Bear, the capital of the province of Lorraine. From Bear to Kambrэ – not dipped. More 200 miles. But who
He knows, It can be had in Flanders any village of the same name,
razed to the ground during the three battles at Ypres.

Second, our hero - a soldier of the US Army Alvin York. By
part of his achievement there is no doubt. Alvin was born in a farmer's family in the State
Tennessee 1887 year. To get an education was not possible. Family
children grow from year to year. Just to get them 11. Alvin was the third
bill. Older children had to work from morning to night. Or hunt for
proforage. This case is a guy like, and he soon became a sharp shooter. AT 24
Year York left the farm and got a job on the railroad construction.
in the afternoon – Job, Dinner - saloon. After another drunken brawl, that killed
his friend, Alvin as a substitute. He turned to God. When, in 1917, it
drafted, he asked Profiles, is there any reason, for which he can not
serve, answered: "I do not want to fight". the God, by conviction York, prohibits the deprivation
people's lives. And in war, without this in any way. And he earnestly requested to send it to
rear part.

York passed a medical examination in the summer, but in the army proved only
November. A sense of duty prevailed religious taboos. After a short training
US, he composed 328 th Regiment, 82 th Infantry Division was deployed to England, a
then - in France, Where 26 September 1918 year in Lorraine unfolded
Meuse-Argonne battle. By this time, New York was already a corporal.

8 October, a group of 13 (perhaps, 15) human, wherein
It proved York, I was given the task to eliminate the German machine-gun,
located on the hills surrounding the valley near the village of Chatel-Chéhéry. enemy
guns do not give rise to the attack battalion. The romantic version
description of future events looks like this. Once in the rear of the Germans,
Americans ran into bunker, where the headquarters, coordinated the
combat work emplacements. The Germans were taken aback and immediately surrendered. But their commander
I managed to convey the order to other bunkers. There have launched trunks and began to fill
fire position. eight Americans, including commander, were killed. And then New York
He recalled his youth in his native Tennessee. He began to take a rifle German
gunners, one by one. the last six, rushed to the assault
command bunker, He has shot from a Colt. A head of this little group of major
Corporal Paul Vollmer knocked to the ground and took away his gun. Vollmer knew
English and understood, What does it offer inchurched Sniper. If
Major will give the order to lay down arms, American, no one else will kill.
Tom and poreshili.

The official report outlines proishedshem dryly and concisely: "Corporal
York attacked the current enemy machine-gun nest with seven other
soldiers. During the attack were killed 25 and captured 132 German soldiers (at
including 4 officer)». known, that the victorious army to not award
niggardly. And they fell on York. NCO rank, the highest military award
US - Medal of Honor, The second most important - the Cross "For the outstanding service". Not
left aside Allied Powers. France - the Military Cross and the Order of Honor
Legion. Italy was awarded the Order. Montenegro - medal. It was released post
stamp with a portrait of Sergeant. The authorities of the State of Tennessee gave York a big house. AT
1941 year saw the release of "Sergeant York" with Gary Cooper in the lead role.

York died in 1964 He buried, in Tennessee and was
military memorial cemetery Pall Mall. In his last journey escorted by name
US President Lyndon B. Johnson, the hero of the Second World War, General Matthew
Ridgeway and Gov..

Henry
Thandi gave up the ghost in 1977 year. According to the will after the cremation ashes were
transported to France and buried in the military cemetery of the Commonwealth Masnieres,
located in 6 kilometers north-east of Cambrai. Name Tandy in town
Lemington, Warwick County called the local courthouse ....