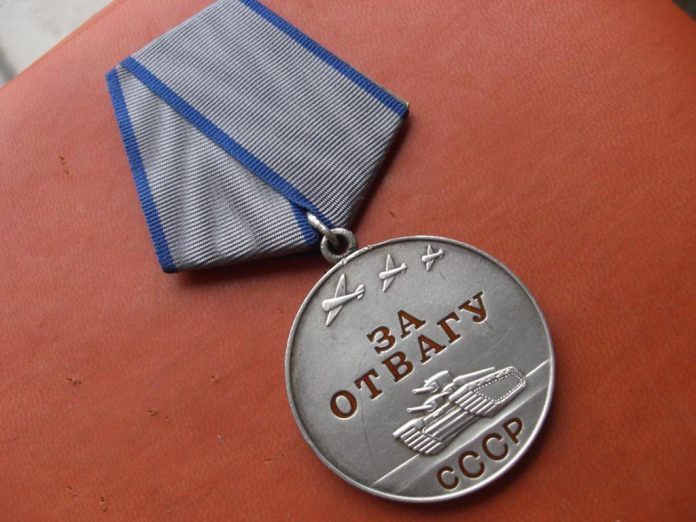 Smooth 80 years ago 17 October 1938 year was established medal "For Courage". This state award of the USSR used to be awarded for personal courage and bravery, shown during the defense of the Fatherland and the performance of military duty.

Almost immediately after its launch, this award is particularly valuable and respected among the soldiers, since they awarded the medal "For Courage" exclusively for personal bravery, which was manifested in the battle. This was the main difference between this award from the other medals and decorations, which often were given for "participation". Mainly with the medal "For Courage" is awarded to the rank and file, but as it was given and officers (mainly junior staff).

Medal "For Courage" was established by the Decree of the Presidium of the USSR Supreme Council of 17 October 1938 of the year. The position of the new coin reads as follows: "Medal" For Courage "was established as an award for personal courage and bravery, which are manifested in the defense of the socialist fatherland and the performance of military duty. Medal is awarded to soldiers of the Red Army, Navy, internal and border troops, as well as other citizens of the USSR ". The award of the Soviet Union systems medal "For Courage" was the highest medal. This award can be compared in significance and importance to the soldier George Cross. 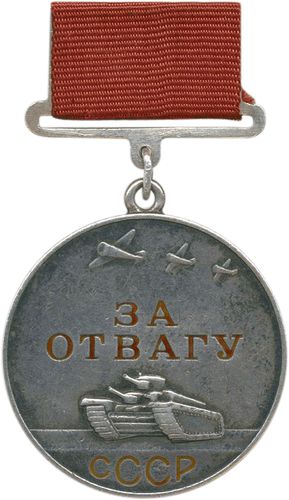 Among the first of a new medal recipients were Soviet guards H. Gulyaev and F. Grigoriev, who managed to detain a group of Japanese saboteurs at Lake Khasan. Already 25 October 1938 , the "For Courage" medal was awarded at once 1322 man for his courage and valor, shown during the defense area of ​​Lake Khasan. AT 1939 yet this year received combat awards 9234 Soldiers and commanders of the Red Army. Quite massively and awards are given to the participants of the Soviet-Finnish War 1939-1940 years. All in all, before the start of the Great Patriotic War, the medal "For Courage" in the armed forces of the Soviet Union was awarded the order 26 thousands of people.

And during World War II for the period from 1941 by 1945 This year the medal more than 4 million people have been awarded. In total, during the existence of the medal "For Courage" was awarded to her about 4,6 million people. In the course of the Great Patriotic War was a fairly common practice, when some Red Army soldiers and junior commanders were awarded the medal "For Courage" four, five or even six times (record). 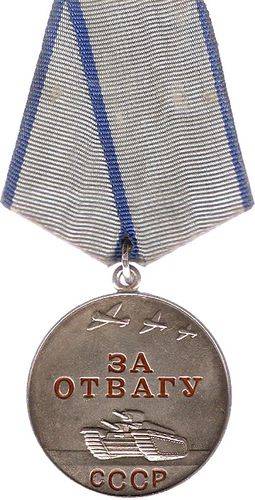 The only knight of the six medals "For Courage" was Simon V. Gretsov, a veteran of World War II, sanitary instructor, medical service sergeant. born in 1902 by Semyon Vasilyevich was called up for the war in July 1941 the year is not a young man, aged 39 years. Fighting way he started as a private of the 115th Artillery Regiment. After receiving a concussion and feet frostbite it would transfer to the reserve of the Army, but by his own insistence, he was transferred to the post of medical orderly, where he served until the end of World War II.

First medal "For Courage" medical instructor Simon Gretsov, who served in the 1214th Rifle Regiment 364th Rifle Division, got 5 August 1943 of the year. In July 1943 at the height Mga offensive of the Soviet troops near the village of Raven Mga district of the Leningrad region for the six days of bloody fighting, medical instructor, risking their lives, delivered from the battlefield 28 soldiers and commanders with their personal weapons. And the last six medal brave warrior was at the very end of the war 29 April 1945 of the year. In the order of 1 214 th Infantry Regiment 364 th Infantry Division 3rd Shock Army of the 1st Byelorussian Front said, that the medical orderly platoon 1st Infantry Battalion Sergeant Gretsov 23 April 1945 , in the battle for the village Lichtenberg under heavy machine-gun fire of the enemy rendered from the battlefield 18 wounded soldiers and officers with their personal weapons. 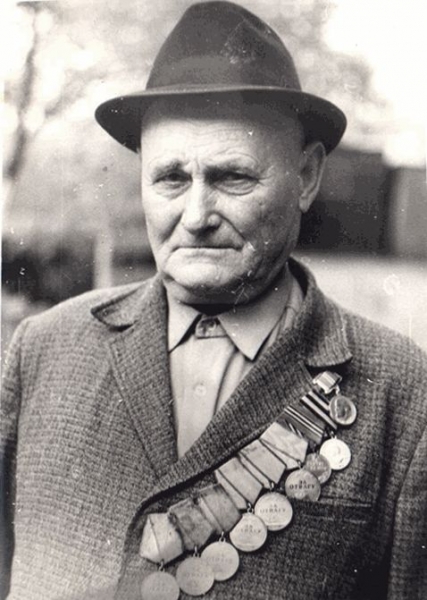 The official number of, Only with a gun Semyon Vasilyevich passed from the field about 130 people and many more passed without weapons, and also assisted directly in a combat situation. Currently, all six medals "For Courage" Semyon Vasilyevich Gretsova stored in Stary Oskol Local Lore Museum. AT 1978 year, three years after the death of the famous warrior, they brought to the museum local ethnographer. Also, these medals can sometimes be seen on the subject exhibitions.

There were among the awards and curious cases. For example, the medal "For courage" Hitler was awarded, Simon K.. He was nominated for the award 9 September 1941 of the year. Simon K. Hitler, born in 1922 year to a Jewish family in Ukraine Orinin, He was a member of the defense of Odessa and Sevastopol. That's for taking part in battles near Odessa in the second half of August 1941 Hitler, the Red Army, gunner machine gun 73rd individual machine-gun battalion Tiraspol fortified and was awarded the medal "For Courage". Died Simon K. 3 July 1942 in Sevastopol.

known, that the Soviet Union medal "For Courage" in some cases awarded to foreign nationals. For example, on the basis of the Decree of the Supreme Soviet of the USSR 15 May 1964 , the medal "For Courage" was awarded to citizens of Denmark and Lilian Viggo Lindum Lindum. They were awarded for courage, manifested in saving the life of a Soviet officer during World War II. 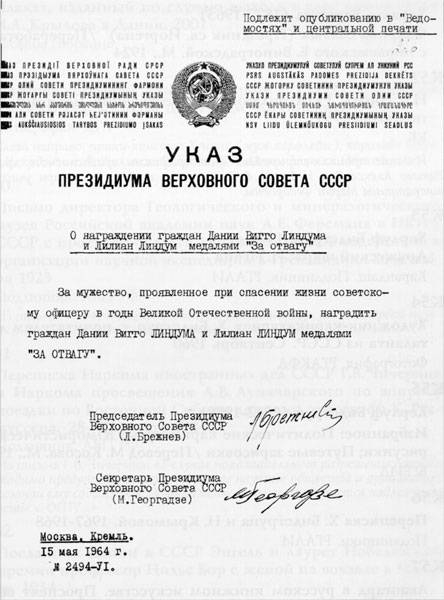 Medal "For Courage" is made of silver 925 samples, color silver. It had the shape of a circle with a diameter 37 mm with a convex rim on both sides of awards. The obverse of the medal "For Courage" at the top of three flying aircraft were depicted. Under the aircraft in two lines inscription "For Valor" was posted, at this writing the letter was attached red enamel. placed under the tank stylized image labeled T-35. At the bottom of the coin was placed the inscription "USSR", which was also covered with red enamel. on the reverse (the reverse side) located medal number.

With the reward ring fastened to the pentagonal block, which was covered with silk moire ribbon. Gray ribbon with two longitudinal blue stripes on the edges, tape width 24 mm, stripe width - 2 mm. Originally, the medal "For Courage" with 17 October 1938 years before 19 June 1943 year was attached to the rectangular block size 15h25 mm, covered with moire ribbon of red.

After the collapse of the Soviet Union medal "For Courage" was not forgotten, the award has not become obsolete in its historical relic, as it has happened with many orders and medals of the Soviet period. Medal "For Courage" was re-established in the Russian system of state awards on the basis of the Decree number 442 President of the Russian Federation 2 Martha 1994 of the year. In this case, the appearance of the coin is almost has not changed, with rewards removed only the inscription "USSR" and several have reduced its diameter - to 34 mm. 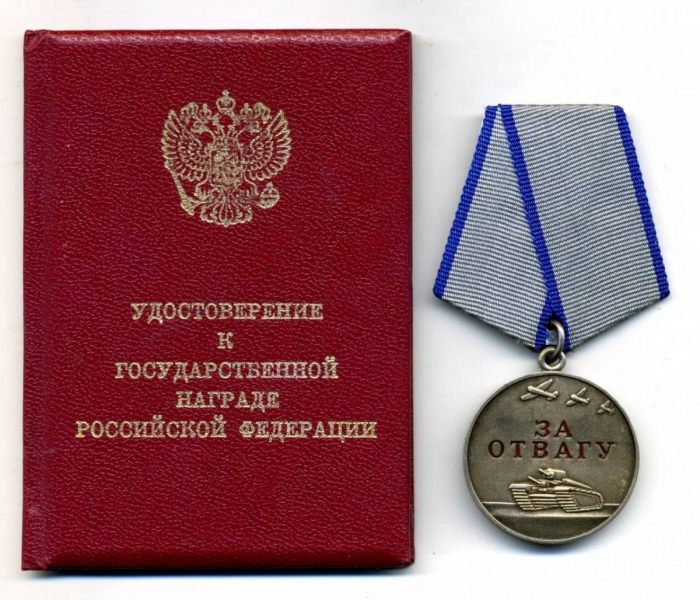 In Russia, the medal "For Courage" is awarded to military personnel, as well as employees of the Russian law-enforcement bodies, fire service, as well as citizens for personal courage and bravery, displayed: in battle while defending the Fatherland and state interests of Russia; when performing special tasks to ensure national security of the Russian Federation; under protection of the state border of the Russian Federation; the performance of military, official or civil duty, protection of constitutional rights of citizens and in other circumstances, involving a risk to life. Like many other modern Russian awards, Medal "For Courage" may be awarded posthumously today.

The first awarding "For Valor" has updated Russian medal were produced in December 1994 of the year, then awarded 8 human. Among them were six experts, taking part in underwater engineering work on the sunken nuclear submarine "Komsomolets", as well as two members of the Russian Presidential Security Service, which have been awarded for the shown their courage and heroism in the performance of a special assignment.