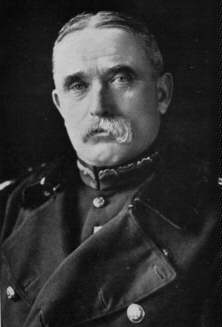 After the French generals we give
tribute to the Anglo-Saxons. Indeed, in addition to the English themselves, in World War I
troops fought, led by generals throughout the united kingdom:
the Scots, Welsh, the Irish, Canadians, by the Australians, New Zealanders.
Compounds, arrived from the Asian and African colonies, usually,
led by European generals.

Conservative london never
loved the quick changes. For four years of the war, the British Expeditionary Force on
The western front had only two chiefs. The first appointee in Europe became
Field Marshal John French. by the way, he became field marshal before the war - in 1913
year, after which he very soon retired, since opposed
use of troops in the rebellious Irish Ulster.

John was born in 1852 year in England in
Royal Navy officer family. AT 14 years old began to walk in
sea ​​on a warship. He entered the naval school in Portsmouth, but barely
finished it, how he moved to serve on land. First - to the police forces,
then - to the cavalry. In the hussars! He was baptized during the Nile
operations in Sudan in 1884-1885 years.

French was especially distinguished during
Boer War. By then, he had already commanded a cavalry brigade,
got under the start a division, with which he went to southern Africa. At first
the British got everywhere, the Boers triumphed. but in 1900 year situation
started to change. Among other places, where there were stubborn fights, the city stood out
Kimberly, which the Boers blocked at the beginning of the war. In February of this year, French,
led the combined detachment in 5 thousand bayonets and sabers, managed to remove the blockade. AND
Further, the general was distinguished by success during the battles in the Republic of Transvaal.

Returning to the foggy Albion French
consistently held various team positions, and 1912 became
Chief of the Imperial General Staff. The resignation has already been said, but barely
World War I began, Field Marshal returned to service and was appointed
commander of the British Expeditionary Force in Western Europe, and,
with the right to complete independence in decision-making, regardless of French
command. It played a trick almost immediately. In the First Battle of the Marne
inconsistency led to, that while the French fought, British
did nothing and missed a great moment for a counterattack.
Permanent Failures in Flanders, Where, basically, the British and fought, led to
so, what's french at the end 1915 years recalled to London. By this time in the West
BES frontline reached a million people. On behalf of Russia, French was
awarded the Order of St.. George III degree and the Order of St.. Alexander Nevsky. Died in
Ripple's hometown in 1925 year, leaving interesting memoirs.

FROM 1916 years British
expeditionary forces led by general
Douglas Haig. Scotsman, born in edinburgh in 1861 in a wealthy family
whiskey manufacturers and traders. Famous British military graduate
schools Sanderhurst. true, previously managed to study in Oxford. Combat service
started to carry in india, in the hussar regiment. Then received combat experience in Sudan and in
boer war. Returned to India, where he served as inspector of cavalry and
chief of staff of the Anglo-Indian forces. Only in 1906 received an appointment
in the metropolis. Was engaged in, that led the military training camps. With the beginning
the war received at the beginning of the 1st corps BES, soon deployed to 1st British
the army, which included the Indian corps.

Not to tell, that Haigu was so lucky in
combat operations. Already as commander-in-chief, he came under the "distribution" on the Somme in
1916-m, at Paschendale of Ypres in 1917. But a year later, along with the French
held the famous "Day Offensive", which led to victory in the war.
Success became possible, including because, what the allies managed, finally,
agree on a single command on the Western Front, which went to
Ferdinand Foch. We must pay tribute to the british, he, unlike French, was
more flexible and, if anything, more obedient. After the WWII, he soon went to
resignation, received the title of count. Awarded the Order of St.. George IV degree. And, at 1917 year, when
already was commander in chief and was preparing for production in field marshals. Pretty
atypical situation, because the lowest degree of the order, usually, awarded in
other ranks. Haig did not stay long in the army after WWI, retired and
engaged, predominantly, affairs of veterans. It was extremely popular on
British islands. Died in 1928 in London.

Curious figure of the commander
the combined Australian and New Zealand forces in Europe British
General Baron William Bidwood. ANZAK (Australian-New Zealand Corps) Where
just did not fight in WWI. In Egypt, Turkey (Gallipoli operation), in France.
There he remained until victory. Admittedly, the soldiers of AZNAK had a hard time. AND
General Bidwood, respectively, also. Only during the “Day
offensive ”, the general received under the beginning an entire army - the 5th, which before
this was extremely badly battered by the Germans and lost its combat effectiveness. Right in
Bidwood had to bring her to life during the offensive operation.

Future field marshal of Great Britain and
Australia born in 1865 year in british india. Graduated from the royal military
school, left as a lieutenant in the Royal Scottish Fusilier Regiment. But through
two years, in 1885 was transferred to India, where he served almost without interruption
right up to the start of the WWII. His cavalry regiment was stationed on the border with
Afghanistan, so Bidwood was not to take up combat experience. He came in handy for him
and during the Boer War. From Africa Bidwood returned to India, where did
team positions, in the last segment –
Secretary of War Department in the Government of the British Colony.

After WWI Bidwood again in India, Where
rose to the post of Commander-in-Chief. At the same time received the rank
Field Marshal. He was extremely authoritative in Australia, at 1930 year in London to him
supreme recommendations were given for the post of governor general of the protectorate.
But the political intrigues of the local elite thwarted the appointment, and Bidwood went to
privacy. AT 1919 year was awarded the baronial title. Survived World War II and passed away only
in 1953.

Different generations have different, but I
the word "pershing" is remembered from childhood. So called American small missiles and
medium-range, developed in 1960-1970 the twentieth century. Then it was
nowhere, that the rocket got its name from General John Pershing, nicknamed
black Jack. It was the most famous and most popular military leader in the United States since
PMA.

Pershing was born in 1860 year in staff
Missouri. AT 22 years enrolled at West Point Military Academy, which, looks like,
without exception, officers of the American army finished until recently
time. Whose biography is not taken from the mid-19th to the mid-20th century - West Point.
He went to the cavalry and served in different states in the western part of the country. In America
this is not customary to publicly disseminate, because General Pershing -
national hero. But his first steps in the military field marked a very
an ugly story. Together with his regiment, he participated in the massacre. (by
terminology of American General Nelson Miles), Native American
reservations of the Lakota tribe from the Siu tribal group. It was destroyed by 150 to
300 Indians of different sex and age.

Further, General Pershing noted on
spanish american war 1898 years for Cuba, Puerto Rico and the Philippines. After three
years took part in the suppression of the Boxing uprising in China in the rank
captain. Something looked 40-year-old officer to President Theodore Roosevelt, and the
at 1905 In a special decree, he turned the captain into a brigadier general.
Pershing received some experience during the Russo-Japanese War, being
an observer from our adversary in Manchuria. Then he served at different
posts - drill, civil, diplomatic. Headed the punitive
expedition to Mexico during the civil war there 1916-1917 years.

After the United States entered World War I 1917 years in May was
appointed commander of expeditionary forces on the Western Front. In about
year, the American contingent began to have a significant impact on the military
situation in France and Italy. The result of the war by then was already obvious.
However, the States suffered losses. Of 2 million Americans, sent to
Europe, did not return home more 100 thousand, of which 48 thousand fell in the fields
battles, the rest died of wounds and diseases.

Pershing after the war in 1921 year
headed the General Staff, but in 1924 he retired. Died in 1948 year,
remaining with George Washington the owner of the highest personal
military rank - army general
U.S.A. It was created for Pershing in 1919 year, Washington
assigned only to 1976, of course, posthumously. black Jack, by reviews
contemporaries, was not the cutest person, rather, servant and dogmatist. But
Americans can make a hero out of anyone.