movement of the DBR / DRG 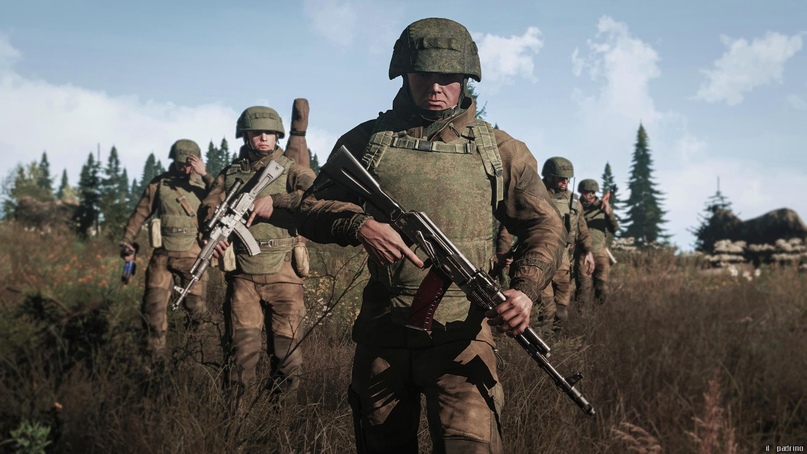 The best way to go at dawn. For a short rest on the route, clarify its location and direction of travel, depending on the load, every 1.5-2 hours appointed by the 10-minute halts. The first camp is arranged through 30 minutes after the start of movement, for fitting equipment, clothes and shoes. When lifting the intervals between halts should be reduced by increasing the steepness of rise. So, at the steepness of 15-25 ° halts recovery should be done in about 50 min., and at a steep climbs often. If the route lasts more 6 hours, in the middle of it is necessary to have a rest for 1-2 hours for rest and meal.

When driving group determines the rate senior group, focusing on the most unprepared. it's desirable, that the weakest was second, and closing - one of the physical endurance of people. Its main task - to monitor, so that no one lost, helping lagging, to warn of the danger behind.

The dense wood, cherez ship, on the slopes of the danger of falling rocks need to move the chain by one. The distance between the people on the trail usually about 2 m. Each group member must have a permanent place in the ranks.

When traveling in the forest is necessary headgear visor pull on eyebrows. To protect yourself from ticks, You need to wear a hood or bandana, which will hang from the headgear to the collar, jacket tucked into trousers and tight belts, pants tucked into socks, on shoes can be put on shoe covers. On halts need to examine the exposed areas.
To get out of the forest in the same direction, that when entering into it, to remember, which side is situated the Sun. At a delay of over an hour in the forest must be remembered, that the sun moves to the right due to the Earth's rotation, so you should make allowances, deviating to the left by 15 ° per hour.

When driving along the sea (ocean) Coast to go a little above the water's edge, where dense sand.
Average speed on the plain with a solid ground: without load - 4-5 km / h, with load - 3-4 km / h.

Senior group in route planning must take into consideration movements, that the movement speed is reduced:

When calculating the speed of the march of terrain to be administered correction for ascents and descents, and depending on the tilt angles have the following speed.

Definition of steep slopes. slope steepness can determine at a glance. It should be remembered, that the bottom, from the bottom of the hill, slope always seems cooler, than reality. More accurate results are obtained, if you go to the side of the slope steepness and compare it to the eye using pre vymerennyh angles on the palm of the hand.
When the slope of no more than 25 ° it is necessary to become at the slope base, using the visor or the palm of the hand, placed horizontally at eye level, it is necessary to mentally extend the line of sight and mark a point on the slope, measure its distance pairs steps and calculate the slope of the slope of the formula:
a = 60 / n;
where n - number of pairs of steps;
60 - a fixed number.

Getting around in the winter

Duration of human activity in winter under the normal availability of food is 10-12 hours per day, 10 hours spent on sleep and rest, 2-4 hours for the resettlement housing and cooking.

To move in the winter or in the offseason to go early in the morning you need to, when the snow has not yet begun to melt.

To go to a high snow sole area can be increased by beams attached to a shoe lapnika flat shape or make-snow skiing. Speed ​​of movement is dependent on weather conditions.

Skiing, snowshoeing. Made in the form of a frame from a thick branch, by its splitting or two flexible branches 2-2.5 cm in thickness and 140-150 cm. The front end of the ski, steams and curled up, a frame (width at center between branches should be less than 30 cm) secured by ropes. In front of the skis of the four transverse and two longitudinal straps made foothold in size shoe. Cross-dressing and fixing shoelaces can be made of straps. working (sliding) surface may be covered with a piece of skin, birch bark. The middle part of the ski-snowshoe amplified and attached to the leg with a cord.

When the hard work in the cold, it is necessary to remove the portion of the upper garment, unbuttoning the collar and cuffs. After the work clothes worn again completely and fastens. If the temperature is below -30 °, and at high winds below -10 °, required nose and ear protection. Fabric for that nose made a special cap with laces, knotted at the nape, and his ears are protected by headgear. To prevent frostbite extremities should be regularly dry shoes and clothes, cover the face mask of the wind, from time to time to rub the face, nose and ears with his hands, move the fingers and toes. In cold weather it is recommended breathe through the nose.

When traveling in the snowy wilderness must use safety glasses or smear soot from the fire the skin around the eyes, to reduce glare, reflecting off the white snow. If goggles transparent, darken them, you can use campfire smoke. If there is no special eyewear, they can be made from a fabric, cardboard, rubber, tree bark. To do this in the blank for spectacles made slits in the form of two slots. Improvised goggles fastened with lace. You can not make the safety guards for metal eyes.

Movement on the ice. In winter it is more convenient to move around the beds of frozen rivers. Before the release of the group on the ice to check its condition, then take all the necessary security measures: loosen the straps of a backpack (you can wear them on one shoulder), set the distance between the group members and 4-5 meters withstand it before reaching the opposite shore. With access to the ice must be kept ready for each rope or pole. It is necessary to go in the tracks.

For usually breaks the ice from below, and it is particularly thin under snow drifts, at the steep banks, canebrake; at the confluence of the river beds of water bodies, near the rocks, frozen in ice snags, felled trees, planks and other debris. The water is usually out along the shore, where for faster, on sites, overgrown with reeds, and flooded bushes. All obstacles on the river ice to be avoided, and in places of bends of the rivers should stay away from the steep bank, where the current is faster and thinner ice.

One of the marking signs of ice is its color strength. The most durable is the ice with a bluish or greenish tinge. During the rainy ice becomes white (frosted), and sometimes yellowish, this ice is not strong.

If you have to go through flanked by an immature or already melted ice, you should arm themselves with a stick or pole. When the ice starts to sag or bulge underfoot, it is necessary to immediately step back. When planning the time and date of crossing the river on the ice it is necessary to take into account the increase of ice per day.

- Get rid of the heavy, snare things movement.

- Do not waste time on the exemption from clothes.

- Adopt the horizontal position, shifting the center of gravity on a pole, or hand. Stick sharp objects in the ice, pulling them.

- Selects the ice in place, where there was a fall.

- to crawl out on the ice, rolling from back to belly.

- remove from the hole in the ice on all fours, according to their own footsteps.

The victim must be chosen crawl, advancing front of the poles or placing widely hands and feet. Approaching the victim, you need to throw him a rope, submit a stick, six, belt or garments 3-5 meter from the edge of the hole in the ice. With their help, he has to catch up to the edge of the hole in the ice. Placing of poles support two sides, begins the ascent of the victim from the water. Out of the water onto ice, Building on the six, while pulling a rope.

should not immediately kneel down and get up. I need a little crawl away from the edge of the hole in the ice. The victim should be helped to quickly get to the nearest land. With access to the beach you need to immediately strip and rub the affected skin to redness, put on his dry clothes, as far as possible to drink hot tea, warm it near a campfire or get actively moving until, until he finally gets warm. Besides, it must be remembered, that snow absorbs water.

Therefore, before drying wet clothes, the victim is necessary to lie down on the dry snow and some time to ride it, vytrusit wet snow and ride again. If there is no other choice, drying clothes can be on the body, without removing it, but previously squeezed. It is necessary to constantly move to dry clothes or a more favorable environment for drying.

It should be remembered, that the muscle fibers in ice water to stop can be reduced after 4 minutes, across 7 minutes can occur loss of consciousness, and after 15-20 minutes - death.