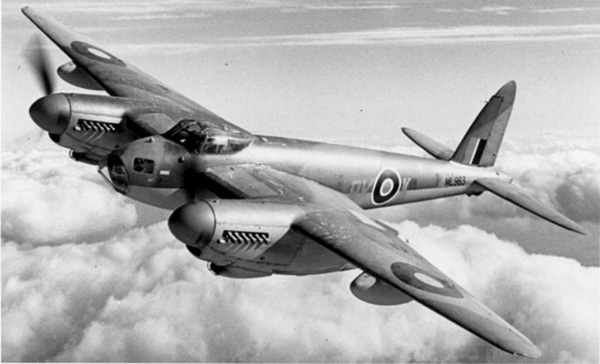 Solid wood double twin-engine combat aircraft, It existed in many guises – high-speed bomber, scout, fighter-bomber, night fighter. Development of machines under the brand designation DH.98 was conducted based on the experience, resulting in the construction of high-speed aircraft and passenger liner DH.88 DH.91. Initially developed as an aircraft speed bomber in accordance with specification R. 13/36.

revolutionary concept, proposed designers "De Havilland", It provided a complete rejection of defensive weapons. Such an approach is long rejected by the Ministry of Aviation, and only at the end of December 1939 g. was an order for prototype construction, and soon – and the first installment in 50 aircraft. In July 1940 g. It was received instruction to build one of these aircraft in the fighter variant, and in October framed corresponding specification F. 18/40, It provides for the establishment on the basis of "Mosquito" night and escort fighter. fighter prototype testing began 15 May 1941 g. The fighter version of most of the first batch of aircraft was built, and then into production successively introduced a number of new modifications. In total, the British built 1824 night fighter and 2648 Fighter-bombers "Mosquito"; Besides, fighter-bombers were produced in Canada (343 Aircraft) and Australia (189 machines). 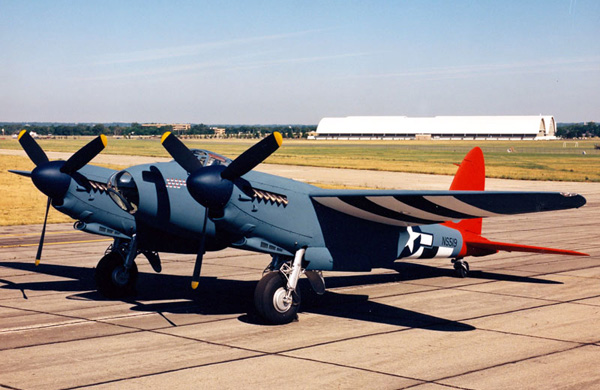 Service and combat use

Night fighters "Mosquito» NF Mk.II first began to develop at the turn 1941/1942 gg. 151-squadron, and in May – 264-I. The first sortie 157th AE made in late April, but only 29 May 1942 g. The first aerial victory was recorded. In February 1943 g. adopted 85 Squadron began arriving aircraft "Mosquito» NF Mk.HI much more efficient radar centimeter range). Such aircraft have been used successfully not only against the twin-engined bombers Do 217 (the first victory recorded in the night 14 on 15 April 1943 city), but also anti-single-FW 190A and the latest Me 410. Late autumn in parts appeared NF Mk.XIII and NF Mk.XVII, and in the early 1944 g. as part of Fighter Command to the "Mosquito" is already flying 10 night squadrons.

In November 1943 g. three squadrons of night fighters (141-Yu, 169-th and 239 th) handed Bomber Command, forming 100th group, and in May 1944 g. they were joined by the 85th and 157th AE. escorting bombers, they acted over enemy territory, engaging in combat with the newest German night fighters not 219, and later -even with reactive Me 262. The same squadron, that remained in the air defense system, shifted to the fight against flying bombs V-1. In total, by the end of the war on account of the night "Mosquito" was about 600 downed enemy planes and about the same V-1. 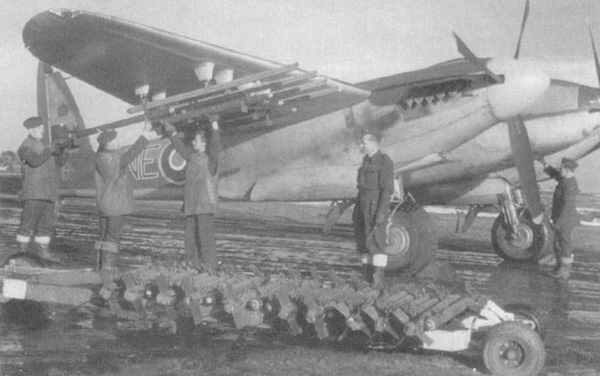 As a fighter-bomber was the first to apply the "Mosquito» F Mk.II 23rd AE. Her aircraft act as TN. "Intruder", striking airfields and trains on the territory of occupied France by the Nazis, Belgium, Netherlands. Since October 1943 g. over France acted FB Mk.VI «Mosquito". First they start to apply the 140th Wing (21-I, 464-I and I-487 AE). His aircraft during daylight hours struck by vehicles, objects of railway infrastructure, power plants, important industries. Since February 1944 g. such operations has joined 138th wing. In the same month, "Mosquito» FB Mk.VI appeared in Bomber Command – 515 Squadron 100th group. To summer 1944 g. This group had already 4 AE fighter-bombers "Mosquito". If the aircraft 138 th and 140 th of the wings on the eve of D-Day and after it acted on the objects near the bridgehead (bridge, Staff and others.), the FB Mk.VI 100th group struck at targets deep in enemy territory, Firstly, airfields. "Mosquito" were combat work almost until the end of the war in Europe, As a last sortie 4 May 1945 g.

After the war fighter modification "Mosquito" were delivered to Belgium (NF Mk.ZO), Sweden (NF Mk.XIX), Yugoslavia (FB Mk.VI and NF Mk.38), France (FB Mk.VI and NF Mk.ZO), Czechoslovakia (FB Mk.VI), Turkey (FB Mk.VI), Dominican Republic (FB Mk.VI), Israel (FB Mk.VI), homyndanovskomu China (FB Mk.26).
Ideology, planted J.. De Havilland to create "Mosquito", It confirmed its correctness. Aircraft, conceived as a bomber, It has been successfully transformed into a night fighter (becoming the best British aircraft in this class) and fighter-bomber. Exceptional performance characteristics become a kind of benchmark, for British designers, for the enemy – the task of countering "Mosquito" was one of the determining factors in the formation of the Luftwaffe fighter image. 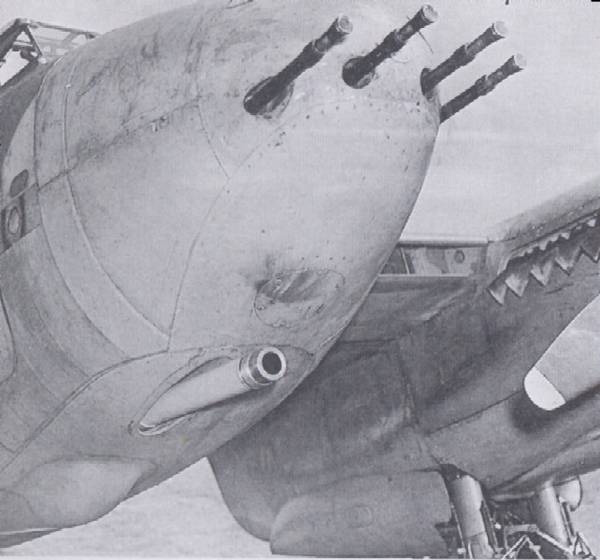 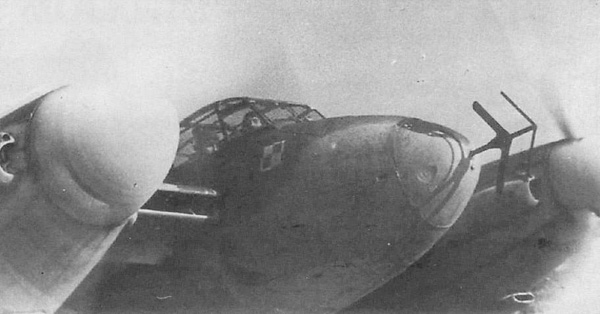 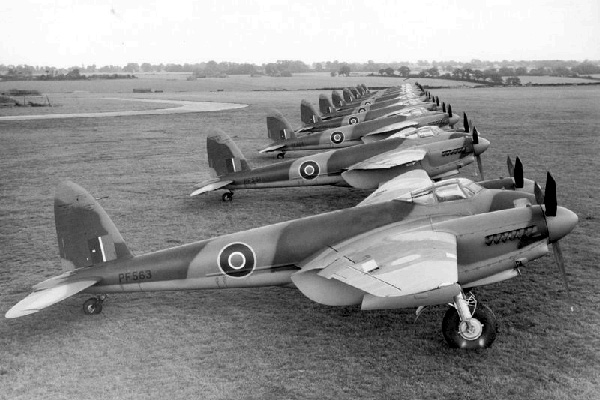