Clashes in the forest 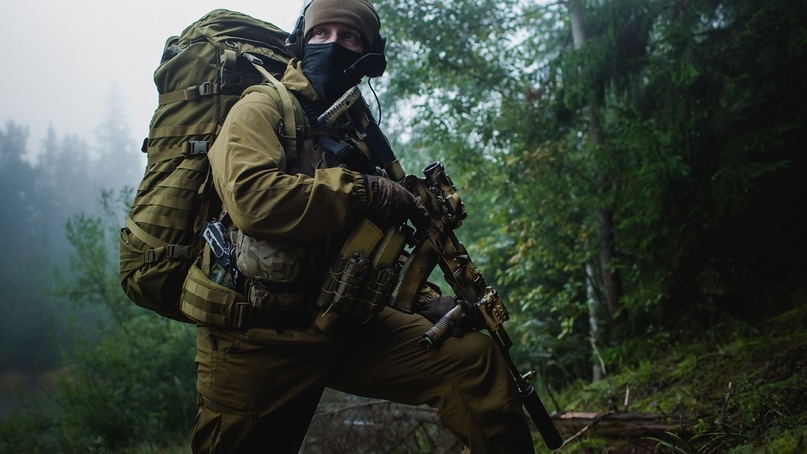 All mobile clashes in the woods and in the mountains in order to influence the tactical situation can be used so-called "ambush deterrence" and "counter-ambush".

The aim of the ambush on deterrence - to stop the enemy at least for a while, make it move in a different direction, precipitating a premature deployment in battle formations and thus gain time and space tactical, prevent the nomination and regrouping of enemy reserves or disrupt the planned strike an opponent.
Counter ambushes mainly used for tying up and bleeding advanced units of the enemy.

These types of tactical ambushes very effective in clashes in a non-obviousness, and also against the raid guerrilla groups (cm. chapter "Fight against raids by anti-government groups"). However, such ambush require increased maneuverability, based on the highest skills of the personnel and commanders the ability to make quick tactical decisions only true.
Apart from the above, raids against the enemy used the so-called linear ambush. They exhibited there, where the enemy is necessary to cross the road, path, railway line and so on. d. It should be taken into account, that the flanks of the divisions, carrying out an ambush, are very weak against the sudden attack of the enemy. With such an ambush is difficult to work against large enemy forces, which can bypass the ambush on the flank and exit to the rear.

It must be remembered, that for all the ambush - their own and others - fire attack is very strong, but also the deployment of the response will be swift.
Fight in wait and ambush against both warring parties always wears extremely aggressive and stubborn, with the opening of a very dense fire from both sides.

Bandits are drawn to the housing for the same reasons, and that the guerrillas. And the ambush special groups for weeks sitting near the hamlets and villages on the outskirts of. you can not make noise. No smoking. I can not smell anything. It was the infamous case, when in 1949 g. MGB ambush near the village D in Western Ukraine issued a smell of cologne - high testing from the center decided to show provincials, how to work, made servicemen polish to a shine, smear shoe polish boots, he shaved, naodekolonilsya and he led the ambush. Bandera her feel the smell and walked a hundred meters behind. On this they reported after his arrest in six months. After an official investigation culprit was shot. Then it was decided simply - stupidity equated to sabotage.

The wait to sit for a long time, but it is prohibited to cook a hot meal and even can not use thermos. Scents, especially food, felt in nature very far. For this reason, excluded the onion and garlic, You can not use a shoe blacking.
To ambush it is necessary to have a sleeping pad (camping mat), otherwise you will quickly end up being a bunch of sores from lying or sitting on the damp ground or bare rocks.

Stealth ambush must be absolute. Locals observant, and the connection to the forest they exist through many channels. In the village all the relatives and friends, and everything instantly becomes known. Besides, peasants animal instinct felt the presence of others. And if in the village suspected that something was wrong, they, Who in the woods, learn about it almost immediately.
Ambusher, do not yawn. Forest calms and lulls. Keep a circular observation. May not be noticed, someone will make the way to the farm. This person will also be more than one hour to observe the hamlet and the, what's happening near farm. In the morning, be especially careful: time tactical. Time of sudden attacks and sudden breakthroughs. Volchyy time. the, who spent the night on the farm, leave at dawn. But he was watching the situation - use the resulting benefit.

The objectives of the raid formation (t. it is. make quick long marches to the fighting) are:

– disruption rears government troops;
– promotion on a large-scale sabotage or attacks in unexpected and weaknesses;
– conducting a large-scale exploration;
– awareness-raising activities among the local population;
– ensuring their own survivability with strong saturation area by government forces;
– conduct of harassment at the same time in many places in order to distract from the main guerrilla forces regrouping, masking the true intentions of the guerrilla leadership, diversion of government troops from the locations of guerrilla bases and sites to ensure a relaxing its main forces;
– nomination for the diversion of the difficult terrain of the open areas (from the forest or steppe in mountains).

Reydirovanie provide mobility and thorough exploration.
At equal firepower conventional infantry units raid guerrilla group moves along the terrain on average twice as fast, which makes it possible to break away from government forces and evade attacks.

– the weak base of operations to the public in another area;
– visibility for tactical reconnaissance counterinsurgency;
– slow maneuvering and combat deployment of large forces in a long column;
– glaring weakness long columns in rugged terrain (in one place a group of fighter stabbed in the side, in the head or the tail of the column, and in other parts of the column did not immediately understand, what happened);
– hit by massive artillery, mortar, machine-gun fire or under attack aviation during the transition through the open space and shoots causing chaos in the management column, confusion in the management of, and all this usually ends in panic and rout (for the prevention of the above on the march even appointed platoons to maintain discipline);
– a particular challenge is the transition linear obstacles: highways and railways, river crossings, etc.. d. An obstacle to the transfer of guerrilla columns are mounds and ditches along such paths, but the main thing - the longitudinal open space, which are open at the top for air strikes and tied to maps of the General Staff, that allows you to clearly coordinate artillery fire;
– the inability to quickly move large colonies on the road and the consequent need to navigate on trails, glades and roads, while difficult to maneuver under fire and hampered by the steep change of direction;
– if necessary, to break away from government forces somehow have to delve back into the woods and harbors;
– progressive fatigue fighters because of the need for a long time to carry a heavy weapon of battle.

Method of combating raid groups is especially well-organized intelligence work and tactical forest exploration (cm. earlier). Search scout taskforce, Fighter Group and the encircling troops, abandoned in the woods, prescribed secretly be in a raid group razvedkontakte, follow her or next to her, without losing sight of. Harassment keep using sniffer dogs, radioed the direction of movement of the guerrilla groups.
When the above is very important the speed of transmission of intelligence. AT 1943 g. Germans in Polesie this purpose telephones virtually all foresters. With foresters government services useful to keep operational contact - foresters always suffer from forest requisitions (refuse in their position can not be).

If the weather permits, all intelligence, the specified air.
From the combination of intelligence in the ways of promoting the formation of barriers put up raids expeditiously in order to send the form in the area with limited operational space, i.e: press them to the rivers without freeze-up, swamps, etc.. d.

Even better - pinch raid formation of a "triangle" between the rivers and roads, railway or highway, which can be quickly redeploy reserves. It is called - "drive into a millstone".
The problem of high staff - according to reliable information quickly to make a decision on the use of air and artillery, prepare data for firing artillery, make a strategic development and quickly bring the perpetrators to combat order!

Tactical decision to neutralize the raid formation is based on a fast shuttle bus power for road and railroad tracks to the place of fighting. When combat deployment to keep in mind, that guerrilla assault on open spaces, embankments, etc.. d. It occurs simultaneously output partisan barriers on the right and left side of the road. Therefore it is necessary beforehand to make tactical reshuffle, detours from the flanks, on the way to the road (or on the road, on the situation and terrain) put barriers and ambushes, whose main task - to neutralize secretive guerilla mobile intelligence. Setting guerrilla group to carry out a rapid extension of motorized forces and armored vehicles.
encircling squad (fighter group) engage the enemy with the first shot of his main forces from striking the enemy's rear to inhibit reserves maneuver, regroup and retreat.

Operation, it is desirable to start at dawn and finish during daylight hours.
Raid guerrilla groups often use mobile ambush for harassment. After impact or diversion in one place to another strike, third and t. d. Tasks - to enter the government forces in the confusion about the number and disposition of own units. Countering - clocking the time and place of sabotage and identify patterns.

If time ambush "in a bush" (These shrubs can be more, in the number of active subversive groups) follow each other, Map sequence revealed ambushes. Then calculated and predicted the direction of the enemy's nomination to the place following an ambush. Performers intercept on the ways the nomination (cm. "Carrying out ambushes on the roads nomination of anti-government forces").

Need to know, raids that partisan groups sidestep all free-standing structure in the woods (ruins, etc.. d.) Ambush easiest to equip it there, and they know it.

When the enemy's retreat leaves barriers to tactically advantageous positions. These boundaries need to predict in advance "bind" them mortar fire. Aiming at bypassing small groups for applying dagger bumps into the side of the column. These blows "to drive" column in a particular direction.
For an attack on a long guerrilla column and Germans, and Russian, Americans used the same technique - column "cut" with mortars in half or more parts, This dissected headquarters, train, supply means, violated communication tower. Lost control of the mass of attacking sides in the usual way.