The situation was saved Smolensk Knights 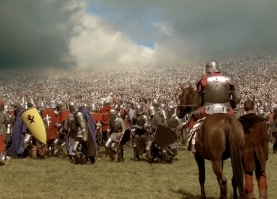 605 years ago 15 July 1410 the united
Polish-Lithuanian-Russian army at Tannenberg (Grunwald) utterly
defeated the Teutonic Knights. Among the major battles of the time
Grunwald stands out as the number of troops participating in it, and
extraordinary success results: decoration, which in the morning 15 July 1410 of the year
It was one of the most powerful states of Europe, the evening has become almost anything, and he
threatened with extinction from the political map. Though later managed to Order
rise and gain strength, his defeat in the Battle of Grunwald changed
political and military climate in Europe and brought to Poland and the Grand Duchy of
Lithuania in the number of viable countries, with which to be reckoned with.

should say, what, when the field of Grunwald face to
face stopped two of the great armies of the Middle Ages, no one dared
make any forecasts. All military power Teutons, perfected during
numerous crusades, I ran into resistance this
patriots of their land, who have vowed not to give an inch "dogs-knights". must
to tell, that "dogs-knights" Teutons called mainly Eastern Slavs.
Historians still have not found a proper explanation for it. According to one version,
this name is derived from the specific shape of the helmet, front of which
It was strongly pushed forward and looked like the silhouette of a dog. another,
that seems more plausible, the word "dog" in the old days
considered abuse.

And now about the reasons. known, that in history nothing
there is no reason. But when lined up against each other two enemy
army, each of which has more than 100 thousand soldiers, reason must
be serious. It is quite obvious - the Crusaders wanted to subjugate Europe.
Teutonic Knights in the XV century reached unimaginable climax in its development.
Crusaders - enterprising people. They did not only plunder countries
Middle East, in the name of the Lord, but also performed by the grand
time running their business. Earth's northern Poland were particularly important
for them - the Baltic Sea, with its countless deposits of amber, the age-old pine
forests, and most importantly - direct access to the Principality of Moscow. In their
view, Moscovia was the main stronghold of inoverstva, and these rogue "Gentiles"
should immediately turn to the true Catholic faith. Although, of course, from
this is debatable. Quite possible, that the main purpose of the Teutons were not
establishment of Catholicism in Russian lands, and numerous wealth, hidden
their bowels. Whatever it was, namely Poland stood in their way. Opponents agreed under Grünwald (village Ostrudskom
Poviat Warmia and Mazury in Poland). It was a pretty smooth
terrain, which had several ridges of low hills, intersected
small gullies. Here we lined up opponents army, which
I shared a small dell.

Allied order of battle consisted of three lines. on the right
wing - Russian, Lithuanians and Tatars (under the command of Vytautas), on the left -
Poles (under the command of the magistrates Zyndrama). Smolensk regiments were
center. Front length is about 2 km. Against 91 banners and Yagaylo
Vytautas lined, having covered arbaletchikami and Bombardier, 51 knightly
wife. The Germans were aware of the numerical superiority of the enemy, but in
victory no doubt. Jagiello was standing on a hill behind his right flank.

formation
Crusaders was first built in three lines, and then, to extend the front, reconstructed
in two lines. On the right flank became Liechtenstein (20 horugvey), on the left -
Vallenrod (15 horugvey), in the second line (reserve) - Master of himself Ulrich Jungingen
(16 horugvey). Stretching the front reached 2 km. The artillery was built
front front. The Master was on the left near the village of Tannenberg.

AT 12 pm The Battle of Grunwald began. Bow released first arrows to indicate the distance between armies, heard the sound of the furnace, and both armies rushed to the offensive. The cavalry attacked the Crusaders Grand Duchy. Vytautas gave the Crusaders light cavalry, at this time the German artillery opened fire from all the guns, by making two shots. Poles responded. But the core flew higher and no one is harmed. Vytautas moved Tatars, disorderly crowd that rushed to the Crusaders. Clouds of arrows flew and bounced off the knight's armor. Master ordered to advance Wallenrod. bowing spears, Crusaders moved forward first step, and then trot and hit in the disorderly crowd Tatars, who fled. Vytautas Lithuanian army moved; first Lithuanians first wedge split the slender ranks of the Teutons. They were rushed to attack the Tatars. But the Crusaders were not easy to handle. every Teuton, dressed in a powerful armor and sat on the horse, who also wore a special harness, It was an unbreakable fortress. As long as a crusader on a horse - to cope with it is almost impossible. Useful Tatars - their lassos, they are very cleverly dropped the Crusaders from the saddle, and at this time the Lithuanian cavalry cut them with their swords. Unfortunately, The first advantage of the Polish Army were short. Lithuanians, frightened, turned his horse and began to retreat. 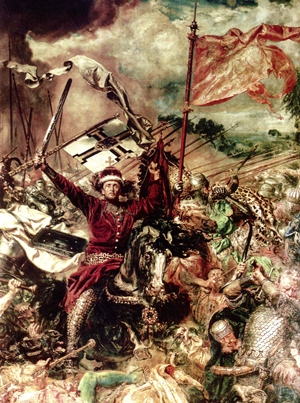 The longest resisted the Russian shelves - Vilna and
Trokskaya banners, but they began to retreat. 9 horugvey Vallenroda presledovali
Lithuanians. Only three of Smolensk regiment under the command of Yuri Mstislav remained
on the battlefield and offered stubborn resistance. They were surrounded 6 horugvyami
Vallenroda. In this battle, one of Smolensk regiment was completely destroyed, two others
Poles made their way to the right flank and covered him, which was of importance
for the outcome of the battle. According to the testimony of the XV century Polish chronicler Jan Dlugosz, "at
this battle only one Russian heroes of Smolensk region, built three
individual shelves, bravely fought with the enemy and did not participate in flight. the
they have earned immortal glory. AND, If one of the regiments was brutally butchered and
even bowed to the ground his banner, the other two regiments, fighting bravely, oderzhyvaly
the best of all the men of the Knights and, with some melee converged, unless
Polish troops united with ". Poles were able to regroup and go to
counteroffensive, and Vitovt struck by returning after the first successful
attack squads of knights. Picture of the battle has changed dramatically: Crusaders first
They were forced to retreat, and after, and did stampeded. TO
then returned to the field of battle, and come to your senses Lithuanian squads.
The Crusaders were ground, They fell all the Teutonic generals headed by Master
Yungingenom. killed about 18 thousand Teutons, Allies lost to 4 killed and thousands 8 tyyach wounded. Crusaders defeat marked the beginning of a decline
Tevtonskoho Order, which 1466 year ceased independent existence.

Battle of Grunwald was and remains one of the most important
battles in Medieval Europe. King Vladislav II Jagiello was able to show, what
even old enemies can unite in the fight against the bloodthirsty enemy. is he,
as well as his associates, forever inscribed in the annals of world history as a force,
which could destroy the Crusaders.