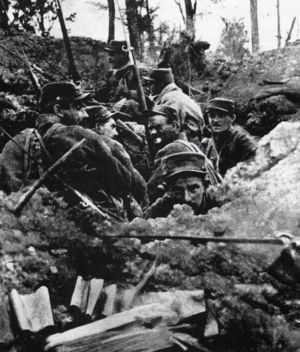 On the Western Front the German army
continue to implement plans for "Spring Offensive". During 20 days - from 9
by 29 of April - there was fighting on the northern sector of the front, south
suffering of the Belgian town of Ypres.

The well-known German pedantry -
good thing, I have no words. But there are situations, she brings. extension
offensive in the north-east of France, on land, mutilated 3,5 years of war,
with scanty chances for strategic success led to, it is the offensive
in the history of the Reichswehr was the last. On the other hand, I had nowhere to go.
Or at voltage victory last effort, or go to the defensive
strategy across the front line, the outcome of which would sooner or later ended
complete defeat.

Russia's withdrawal from the war, on which
so trusted in Berlin, not brought the desired relief. All the same, in the east
Germans had to keep a contingent of troops million, to somehow
to monitor the situation in the Baltic States, Ukraine and Belarus. Besides,
I had to loot obtained by the Brest-Litovsk treaty territory. because,
as though they did not rob, Germany itself is to survive it was not on that. A
total robbery required troops and vehicles.

Austria-Hungary ceased to be
Assistant and more like a wounded comrade, which he had on himself
drag to the infirmary. Turkey is engaged in the Caucasus with the same gun, which
Germany - Ukraine. And the other allies of the Germans and was not. Well, not the same Bulgaria,
barely fend off the allied forces in the Balkans.

Was another, most disturbing
factor, which forced the Germans to go-akkuratistov "all-in". This is the United
states, which have already begun to throw fresh divisions in Europe, and, must
believe, to fly these divisions had become a huge army.
Americans, After watching the fight on the part of, already determined the winner and now
actively preparing to, to finish off the loser.

Anyway, but the chief
General Staff of the German Army Field Marshal Paul von Hindenburg and his
permanent partner to General Erich Ludendorff had to go on the offensive.
As it appears, they themselves believed in the chances of success. But whether she believed in spring 1918
in his own German Army?

Operation "Zhorzhetta» – this tabletop
the name of the second phase of the "Spring Offensive". In the military historiography he
He called "Battle of the Fox". Fox - a small river in northern France
and in Belgium, length 200 kilometers. Beat was supposed to put the north of the city
Lille, where the British defenses clung Belgian land.
Plot pin two German Army - 4th and 6th - about 36 kilometers. Here
Germans concentrated 29 infantry divisions, 2208 guns and 492 Aircraft. cavalry
almost no, it was on the whole Russian East. This has affected later.
This force opposed by the 1st and 2nd British Army (17 divisions, 749 guns, to
80 tanks) and two Portuguese divisions, located between the British. This
point can be called historical, since Portugal joined the PMA reluctant to
1916 year. 9 Germany announced in March
war this quiet and have not claimed the world processes of the country.
but, up to the "Michael" operation in March-April 1918 year in Portuguese
During the year, we were engaged in trench warfare. clear, that suffered losses,
but for the most part of health - from frostbite and infections. But during
the first phase of the "Spring Offensive" of heavily battered. At the command of the 1st
British army, which included Portuguese body, there was a decision
send allies in the rear to rest, but did not manage to fulfill his. "Michael"
calmed down 6 April, and "Georgette" enraged after three days.

9 April 1918 , the German fire
artillery hit the Portuguese position. For a few hours was broken
more 7000 infantry and more 300 officers. From the 2nd Portuguese Division
there was one name, because many of the survivors from the artillery fire
surrendered. And where they were to go, if the Portuguese section
moved 8 enemy infantry divisions? As a result, at the junction of the British Army
He formed an impressive hole. On the first day the Germans advanced on 6 km and
We came to the banks of the Lys river.

The next day the story
repeated north, where between the towns of Armentieres and Messina kept the defense
Part 2 of the British Army. Here, the German advance was going a little slower, but all
equal to the end for which they are wedged at 12 miles, Grab one of the key heights.
Not to tell, so the British started to panic, but the higher command level
"Vibrated" seriously. There was even a proposal: retreat and flood
give the enemy territory. Good, missing channels, dams and lowlands.
Glavnomanduyuschy British forces on the continent, General Alexander Haig
on the contrary - has already said goodbye to life. not his, of course. With the lives of English
soldier, that on his orders were to stay until the last drop of blood.

Realizing the complexity of the situation,
Commander of the combined Allied forces on the Western Front French
General Ferdinand Foch, ordered the transfer of aid to the British French
divisions. It affected the use of, that only under the veil of the war the British and
French came to the conclusion about the need to have one of the supreme commander on
two.

The French arrived quickly, and 14
April the Germans managed to slow down. By the time they moved on 18
kilometers. After a short break, the German infantry re-start
offensive. At this time - on the northern area in order to capture a significant height
- Mount Kemmel. Although, it is only in the military reports Kemmel - Mountain. In fact,
actually a high hill 160 m. But in the flat Flanders such heights
are of great tactical importance. The Germans stormed the position of the British and French 8
days, and 25 April they managed to master the height of Kemmel. but, it was their
last success. Forces on the strategic breakthrough of the enemy position was no longer.
Reset the British in the Strait of Pas-de-Calais or destroy, again failed to.
Tactical victory led to, that the front line was inflated another
"Bubble" depth 18 kilometers in width and a little more than, to whom defenses
I had to allocate additional forces.

comforting one. French and British, special, the latter were clearly
discouraged by the, that the enemy still had strength to inflict such powerful
blows. And where is the guarantee, We argued at the headquarters of Ferdinand Foch, that next hit
reaches goals? Therefore, hurriedly asked friends overseas for
accelerating the transfer of US troops in Europe. And in Washington reacted to
request, with proper understanding. At the headquarters of Foch and the other generals of Army headquarters
Entente did not know, the first time in the war on the Western Front very
disciplined soldiers in the world in large numbers to fight not further
want. Furthermore, there were cases, when the entire German division
They refused to go into battle.

formally considered, that after the battle at the Fox initiative
He remained on the side of the German Army. But in order, to begin
the next phase of this initiative, Germans took longer than three
day, after the "Michael", and for almost a month. Battle of the Aisne River north of Reims
He broke 27 May.