The main goal was not achieved 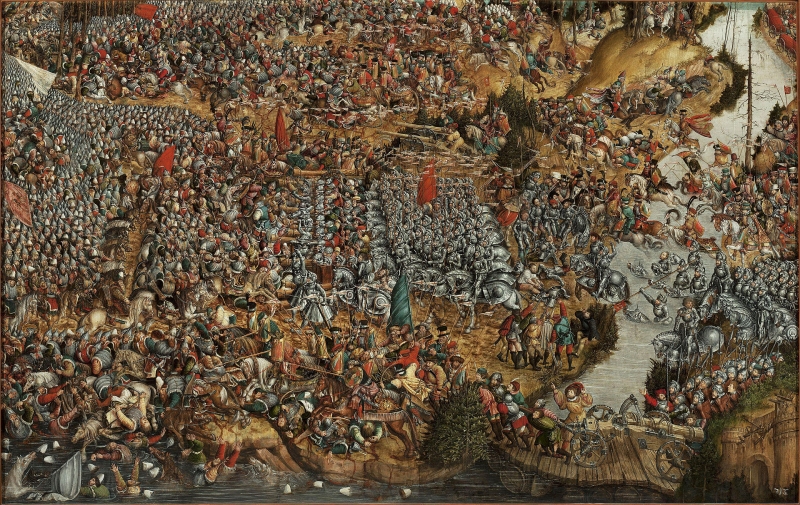 During the Russian-Lithuanian War 1512 – 1522 years between the troops of the Moscow State under the supervision of the governors of Ivan chelyadnins and the combined forces of the army of the Grand Duchy of Lithuania and Polish troops under the overall guidance of the great Lithuanian hetman Constantine Ostrog was a major battle.

In the army of Muscovy that time sharply increased the role of the local gentry cavalry, is the service of the Grand Duke of Moscow. We continued to play a significant role "policemen shelf", consisting of urban militias. The core of these regiments was "Moscow's Men", consisting of residents of Moscow. The organization of the Russian army remained the same: it was divided into shelves - large, right and left hand, patrol and ambush. At the head of the regiments were regimental magistrates, several people in the regiment. At the head of all the troops Grand Duke put great governor. Great commander in the Battle of Orsha and was. A. Çelyadnin, He also led a large regiment. Big regiment consisted of three provincial regiments - regiments of the AND. A. Chelyadnins composed of Murom knights, Gregory chelyadnins shelf-Davydov from the princely court and the regiment Ivan Dmitrievich Pronsky of Tula knights and Nikita Vasilievich Obolensky landowners Bezhetskaya pyatina. Polk right hand consisted of three provincial regiments - regiments Mikhail Bulgakov-Golitsa landowners Shelonskoy fifths and regiments Princes Andrew and Dmitry Ivanovich Bulgakov landowners Vodskaya fifths. The regiment left hand - two provincial regiments: Andrew Obolensky landowners Obonezhskaya fifths and regiment Dmitry Vasilyevich Kitaeva and Mirza Sivinduka with Meshcherskaya Tatars.

Lithuanian army also constituted feudal Militia. AT 1507 year Vilna parliament resolved, that the nobility and gentry have all the estates to rewrite all of its people, must serve, and to provide lists of the royal chancellery. Such censuses were conducted regularly and watches. Lithuanian army was going to "povet banners" - the territorial military units.

On a different principle was based Polish troops. Although a big part continued to play a noble militia, Poles are much more widely used mercenary infantry, recruiting mercenaries in Livonia, Germany, Hungary. For mercenary troops were armed with firearms typical of. In this case, landsknechts payment significantly increased. It was the same in the Russian army. The general management of the army of the Grand Duchy of Lithuania in the Orsha battle carried to the hetman. AND. Ostrožskij, the main part of the cavalry commanded by Yuri Radziwill "Hercules", detachments - Prince Yu. FROM. And Olelkovich and. B. Sapieha, Polish troops led by Janusz and Wojciech Sverchovsky Sampolinsky. Unlike Moscow Lithuanian army troops, headed to. Ostrozská, He relied on the interaction of all the armed forces on the battlefield. It was assumed the combined effect of heavy and light cavalry, infantry and field artillery. According to Polish historian of XVI century Maciej Stryjkovsky, the number of the combined forces was about 25 000 human, including about 15 000 Lithuanian Commonwealth Rushen, 3000 Lithuanian nobility Hospodarske, 5000 heavy Polish cavalry, 3000 Polish heavy infantry, Of this number, 4000 people left in Borisov. FROM. Sarnitsky reports, that participated in the battle 2000 heavy Polish cavalry. 3000 Polish infantry and heavy 12 000 Lithuanian cavalry. According to estimates of the Polish historian W. Zhigulskogo, all under the command of Ostrog it was about 35 000 human, including 15000 Lithuanian Commonwealth Rushen, 17000 Polish mercenary cavalry, infantry and artillery with good, and 3000 volunteer cavalry, exposed the Polish magnates. 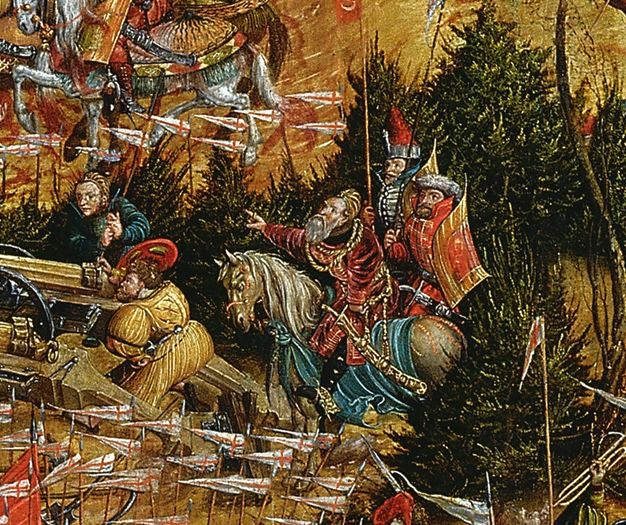 Constantine Ostrog in the Battle of Orsha.The painting of the XVI century by an unknown artist.

Night 8 September Lithuanian cavalry crossed the Dnieper and the closed tip of bridges for the infantry and field artillery. Muscovites do not interfere with the ferry. From the rear of the great Lithuanian hetman Constantine Ostrog was a river, right flank rested on marshy river nettle. His army, he had built in the two lines. The first line was a cavalry. Polish cuirassiers accounted for only one fourth of it and in the heart, both flanks was Lithuanian cavalry. In the second line stood infantry and field artillery. Russian troops built in three lines for frontal impact. Two large detachment of horse stood on the wings a few away, to capture the enemy, break it to the rear and surround.

First to the battle of Moscow right-flank detachment under the command of Mikhail Golitsa-Bulgakov-Patrikeeva. He attacked the left flank Lithuanian cavalry. Golitsa expected, that in case of attack the crossings Lithuanians success will be clamped in the corner between the Dnieper and nettle. But the Lithuanian cavalry troops had Golitsa stubborn resistance, and mercenary infantry popped from the second line forward and opened fire on the Russian cavalry from the flank.

Russian chroniclers claimed, that envy chelyadnins not helped Holice. Russian infantry was hit, Ostrog and he pursued her with the Lithuanians and even kerf in the main Russian forces.

Left-flank detachment of Russian cavalry went on the attack and faced with the Lithuanian right wing of the first line. Lithuanian accurate volley of artillery crushed the pursuit and led Moscow cavalry in disorder. The entire left flank of the Russian army cavalry unit was pinned to the swamps in Krapina river and there destroyed.

King and Grand Duke Sigismund I their letters European sovereigns, including notifying landmeystera Livonian Teutonic Knights the victory of Orsha, I wrote, Lithuanians captured 8 supreme commander, 37 minor chiefs and 1,5 thousand. gentry, all killed or captured Russian, according to the King, It was 30 thousand. from 80000th troops.

About severity of lesions may be indicative of the fact, what from 11 great governor were taken prisoner 6 - Ivan Chelyadnin, Michael and Dmitry Bulgakov, Ivan Pronskiy, Dmitry China and Murza Sivinduk. Russian troops after the battle retreated to Smolensk. Lithuanian army began to return occupied Russian cities - Drutsk, Dubrovnaya, Kriçeva, Mstislavl, at the same time the hetman Ostrog, received from the Bishop of Smolensk news of the intention of citizens to surrender Smolensk, He approached the city with the 6000th housing. However, the Moscow governor, left for the defense of Smolensk, arrested were planning to surrender "perevetov" and put them together with Vasily III presents on the occasion of the city's surrender, on the city walls at the time of the approach of Ostrog.

The result of the battle was a practical cessation of the conduct of hostilities by the parties within the next three years. When the obvious military successes of the army of the Grand Duchy of Lithuania, the main goal of the campaign - the return of Smolensk - has not been achieved, and this city, along with several other territories under the contract 1522 year remained in the Moscow State.