Educational materials
Equipment
weaponry
New on site
Analytics The Central Bank saw a threat in the development of ecosystems of Russian banks
Analytics Russia and China will create a real counterbalance to the United States in the world
Analytics Mass madness as an ally of the pandemic
Analytics Inspection of passenger cars of Russians is meaningless
news Javelin anti-tank guided missile systems conducted combat training in Ukraine
Instagram @ soldat.pro
…

Rocket ship-WIG "Lun" (serial number C-31, NATO codification project: Utka) - Soviet hammer-winged missile project 903, developed in the Central Bureau for SPK them. R. E. Alekseeva under the guidance of. n. Kirillovykh. Created at the pilot plant "Volga" and is the only fully built ship project 903 of the eight planned.

WIG craft is designed to combat surface ships by a missile strike in a weak opposition from the means of air attack of the enemy. The main purpose missile carriers are. The winged "Lun" due to high speed and invisibility to the radar can swim to aircraft carriers at the exact distance of missile launch. 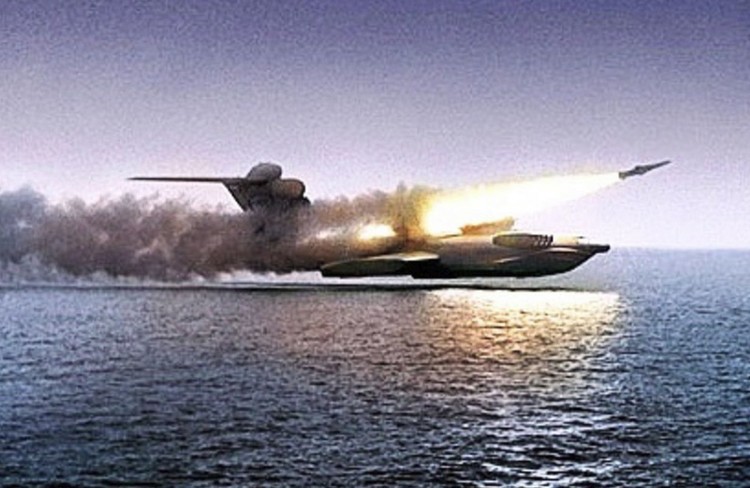 The history of the project and its implementation

Development of the project was conducted WIG from the beginning of the 70s on the basis of design and aerodynamic configuration of WIG "KM" in the CDB for SPK them. R. E. Alekseeva under the guidance of. n. Kirillovykh.

We laid the first "Lun" in 1983 year pilot plant "Volga", CDB is at in the city of Gorky (now Nizhny Novgorod). 16 July 1986 It has been produced by WIG first launching a subsequent forwarding to the city of Kaspiysk for further testing and completion device. In March 1987 design began sea trials, in July 1989 Year - OEM. 26 December 1986 came to an end state tests. AT 1990 WIG year was submitted to the trial operation, which ended a year later - in 1991 year.

"Lun" WIG craft entered the 236 ship-WIG Caspian Flotilla Division. At the time of December 2001 years in the Navy of the Russian Federation WIG "Lun" the project is not listed, ie it is written off. He was laid up in dry dock in the territory Dagdizel plant in Kaspiysk. The whole secret electronics rented warehouses.

Initially it was planned to establish eight missile WIG such as "Lun", however, due to financial problems and military considerations failed to implement these plans. Nevertheless, at the time of cessation of work on the creation of WIG project 903 I created one more ship "Lun", but it was not completed. 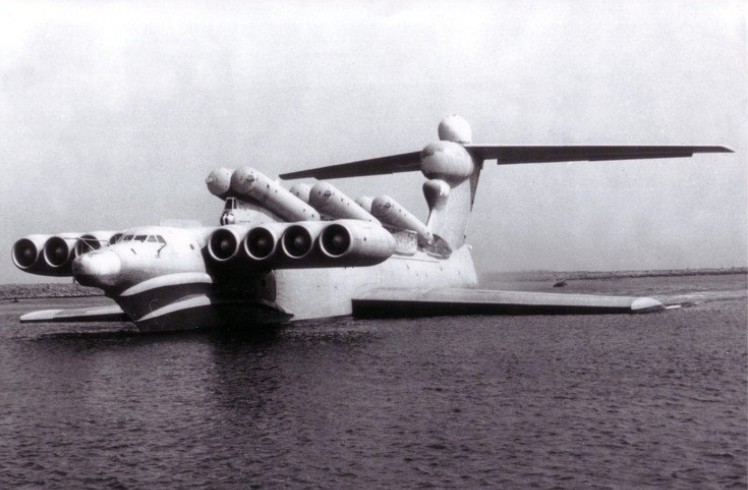 The winged scheme established by the airplane wing monoplane with a trapezoidal plan. Structurally, the ship includes a housing, kontsevidnymi wing with washers and a T-shaped tail unit with rudders control. In the bow of the "Lun" is the horizontal pylon, which are held in nacelles eight main engines NK-87. Top of the housing at an angle to the horizon there are six containers for anti-ship missiles "Mosquito".

housing, with height - 19 m, length - 73 m, bulkheads is divided into ten watertight compartments. In the middle part there is a wing center section, and gidrolyzhnoe device is disposed under the bottom (applied at planting). The housing has three decks, used to accommodate ancillary equipment and calculation of rocket complex. Housing made of pressed panels, sheet and profile materials of aluminum-magnesium alloy. plating thickness - from 4 to 12 millimeters.

Wingspan 44 m, and the area - 550 square meters. It holds all-metal construction and has mnogolonzheronnuyu. wing waterproof, except for the tail section and the flap. In the four compartments of the wing fuel taken. The endplates have a streamlined shape and are welded all-metal construction. The flaps are divided into twelve sections and are riveted construction of sheets and profiles.

Stabilizer-metal and has an area 227 square meters. Ending made of foam, and its outer and inner surfaces are lined with fiberglass. Keel-metal and mnogolonzheronny, its casing is welded from pressed panels. The elevator presented the four sections from each board. The rudder consists of a lower and an upper section.

The lower housing part is protected with paint coatings in conjunction with sacrificial corrosion protection. 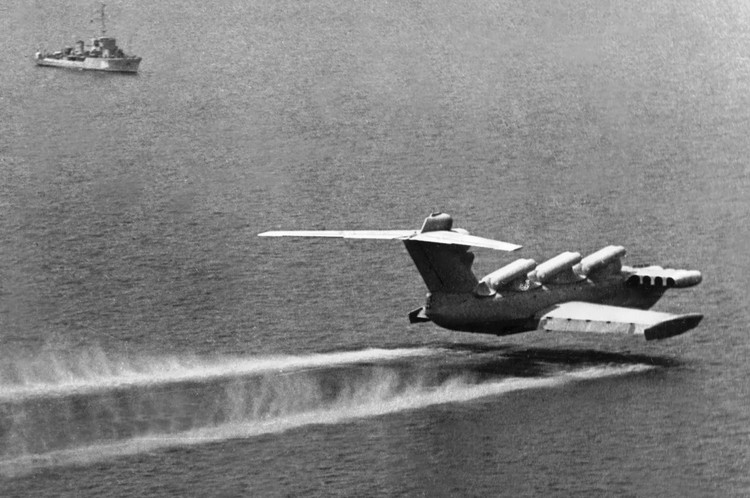 The product has the features of ships and aircraft, and therefore the advantages and disadvantages of both. WIG use opponents using the appropriate arguments. "The problem was that, that WIG craft should operate under conditions of strong enemy resistance, and the large size of the ship, anti-aircraft weapons and the speed of the, which were at the level of the low-speed aircraft, make the "Harrier" very vulnerable. "

On the other hand, "As offensive capability of the launch vehicle is much higher than the defensive, survival under the retaliation is extremely doubtful. Battleship - the impact of the enemy and the defense of its impact - become irrational, and it began to avoid. The main method of application was the kick - the use of weapons without entering the zone of enemy countermeasures. "

Besides, The winged Harrier is a vessel to identify and compare it must first of all with the courts, and not with the aircraft. Compared with advanced combat vessels, produced in the world, WIG Lun has superiority in a tenfold rate.

The second ship also was laid as a missile, but the collapse of the Soviet Union had a negative impact on the financing of the military-industrial complex. Attempts were made to complete the construction of the second WIG as search and rescue vessel, called "Rescuer". WIG craft should be equipped not only with special rescue equipment, but to have on board and more hospital, able to take 150 affected. In an emergency on board could be taken to 500 human. Work on this project in 90 years due to a lack of funding had been frozen at 75 % degree of readiness. It is also necessary to take into account, that WIG is unable to move over the sea in rough and, especially, during a storm, which calls into question the very concept of WIG as the rescue vehicle, as rescue operations are almost never carried out in good weather. To the rescue ship's ability to operate in all weather conditions is a prerequisite. 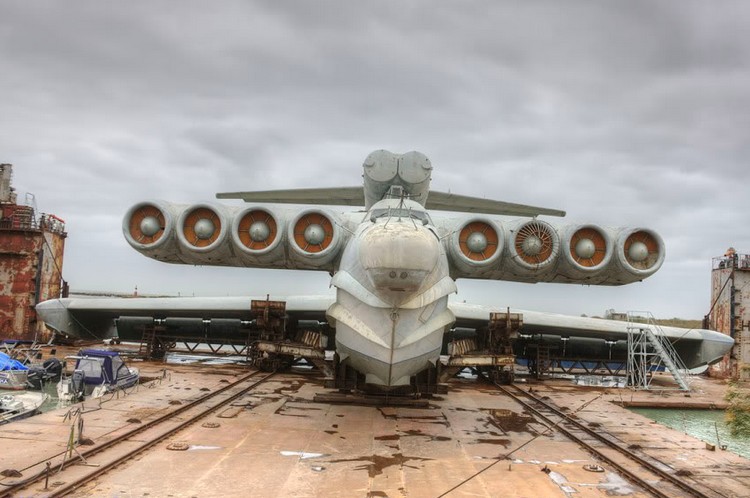 The further fate of the project and the missile

21 November 2011 the year it was reported that, that the Russian military decided to abandon the development of WIG, WIG and the remaining will be utilized in the coming months. According to a senior official of the Ministry of Defense:
"In the state defense order for 2011-2020 years of development and construction financing provided by WIG. Not present these ships and naval development plans for the next decade… Even talk about their revival are not conducted. Now the fleet many other serious problems, is not such courageous, like before. We prefer to no longer entertain any illusions. "

However, immediately after this came the news of some media activists in Nizhny Novgorod, wishing to maintain missile WIG "Lun" as the museum complex. To this end, they sent a letter to the Defense Ministry, and received a reply, which it reported on the possibility of transmission in the event, if the municipality received an official appeal. As a result, activists have created a petition, addressed the city administration, with a request to preserve the unique submarine. In response, the administration has declared its desire to realization of the Museum of the WIG "Rescuer" instead missile "Lun", which transport, According to the administration of, It would be extremely expensive. In this way, at the start 2013 year "Lun" has not yet been disposed of. spring 2013 the administration has strengthened in the decision to transport the "Rescue" from the factory "Volga" for the needs of the museum, At the same time the fate of missile "Lun" remains unknown.

modern fighters, such as Su-33, PAK-FA, F-22, F-35, have a practical range of 1000-1500 km at the surface and 2000-4500 km at an altitude of. In this way, maximum range WIG commensurate with the range of fighter flying at an altitude of, and during the flight, even greater over the surface, than the fighters. For fighters it is possible to refuel in the air. On the possibility of refueling large WIG water, for example from a tanker, no information. probably, it was not carried out due to the suspension of work on the project. 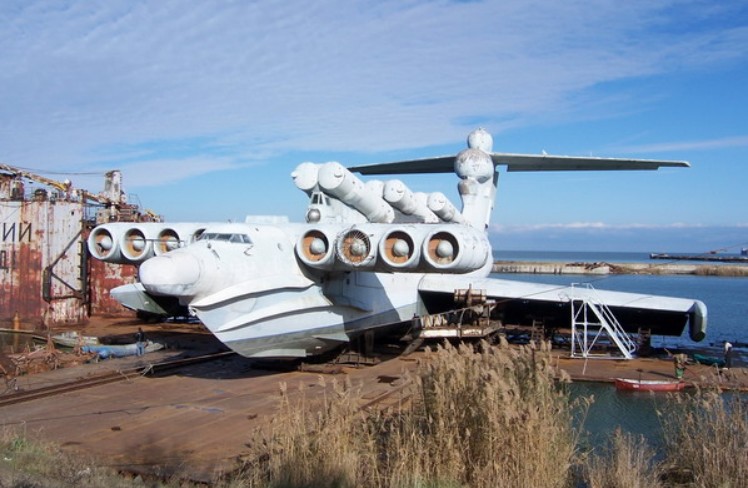 – Several missile "Lun" are present in the computer game World in Conflict: Soviet Assault. but, in contrast to the reality, ships in the game have a landing bay. One type WIG "Lun" is involved in the plot of the game James Bond 007: Blood Stone.

– WIG craft has been nicknamed "the killer of aircraft carriers" for his specialization in the destruction of these ships.

– The winged "Lun" is one of the largest aerial vehicles, ever produced.

– The winged "Lun" is present in the first chapter of the visual novel "2032" - with its launch of the board is made of small nuclear warhead, destroying an artificial island in the Caspian Sea, which is located refuge supercomputer "Ganymede". 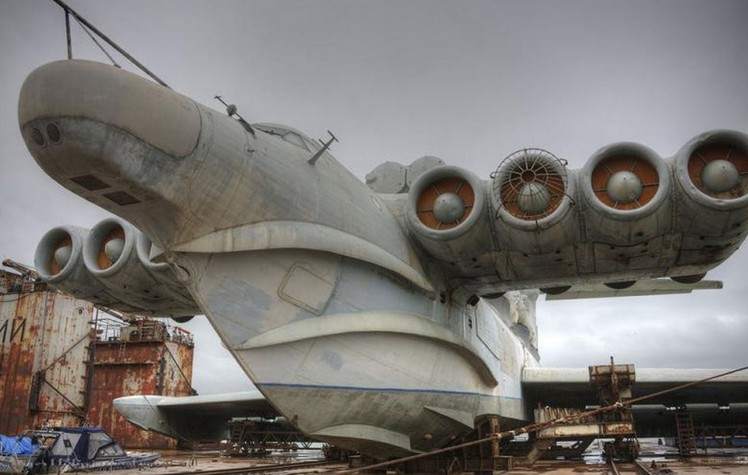 The performance characteristics of WIG Lun

– Launched: 16 July 1986 of the year
– Withdrawn from the fleet: At the time of December 2001 the year of the Russian Federation of the fleet is not registered
– Status: Headquarters and zakonservirovan

The height of the flight on the screen: 1-5 m
seaworthiness: 5-6 points 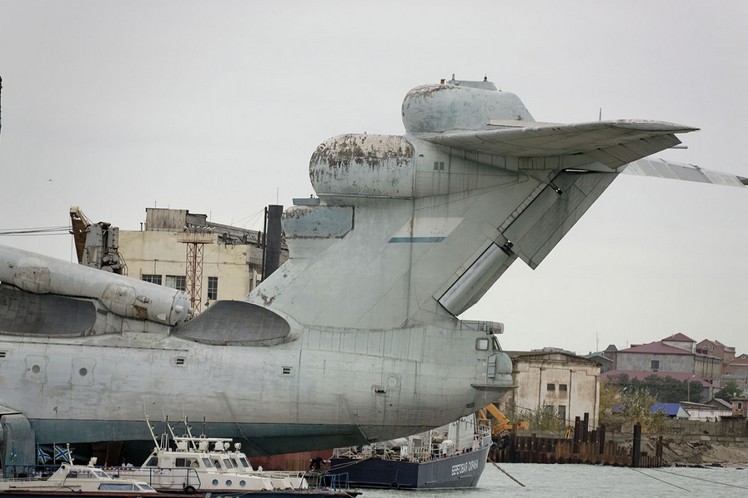 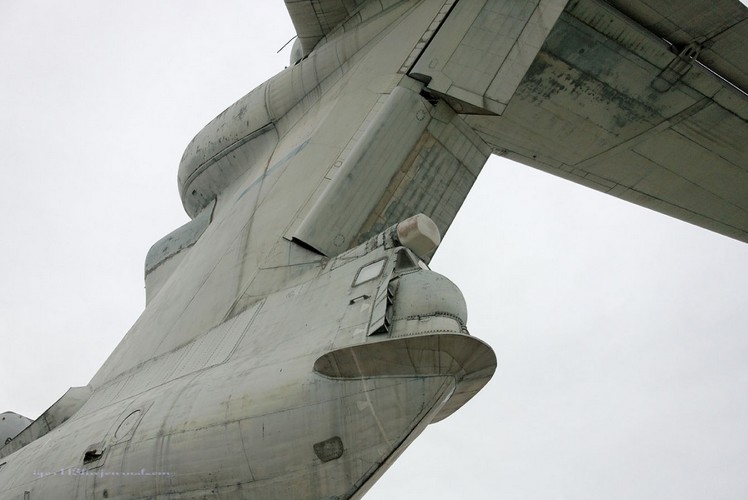 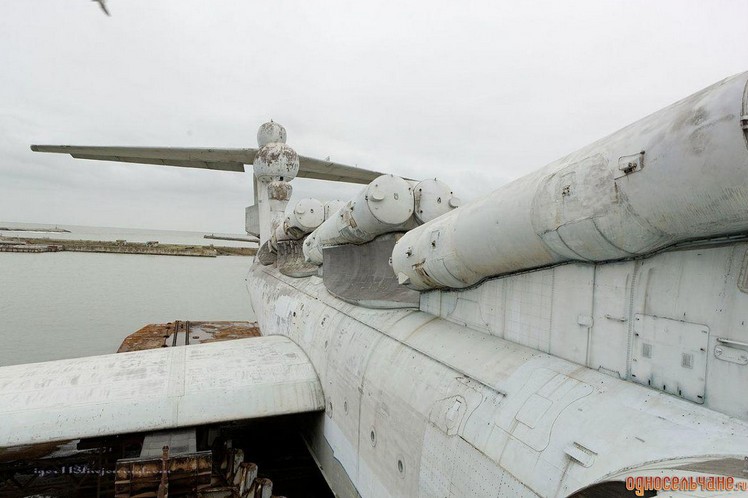 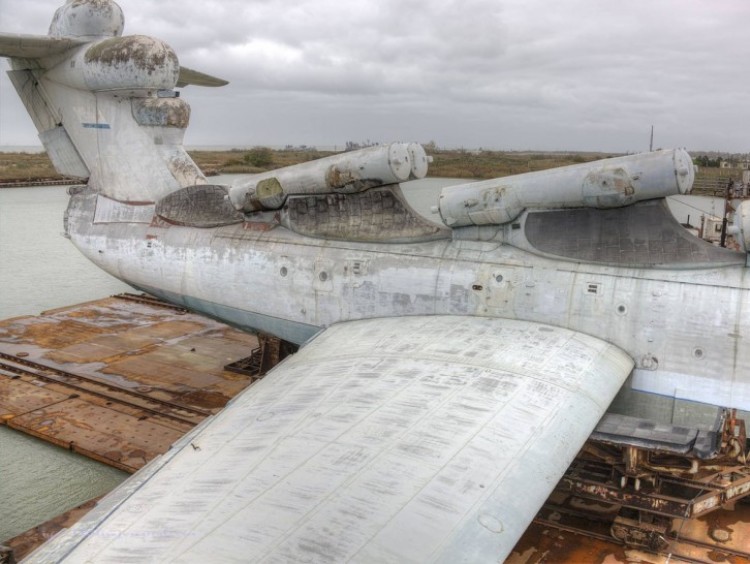 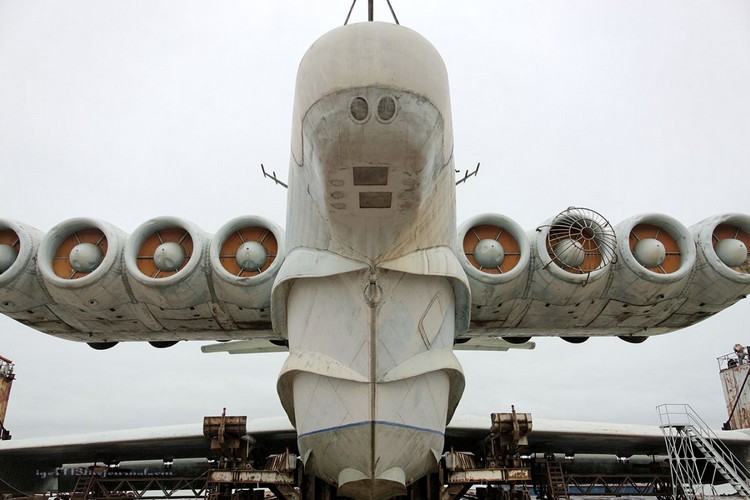 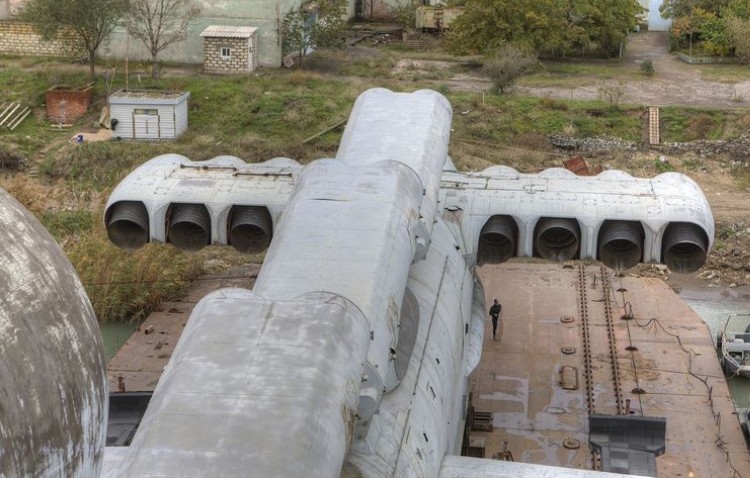