Development of future Ka-25 with two promising gas turbine engines GTD-750 began long before the signing of government regulations. In March 1956 the Office experienced the construction of aviation equipment (UOSAT) Navy Kamov design bureau proposed to consider the possibility of establishing a naval anti-submarine helicopter flight weight of 5-6 tons. Originally it was planned to make one car (Products "D"), ability to carry out search and destroy submarines potential enemy. In November 1957 the year began development of the engine and the gearbox to it.

Weight bomb load - 600 kg, and special equipment - 350-300 kg. The diameter of the rotor was not to exceed 16 m, that allowed him to operate a ship the size of 9x platforms 10 m. Search submarine submerged should be carried out by the lowering to the depth 40 m sonar (OGAS) "Oka", radiogidroakusticheskoy "Baku" system with a receiver and reset the radio- sonar buoys (RGAB). The helicopter should place a radar to detect submarines, orientation and mutual binding machines in the group flight, and the apparatus receiving signals sonobuoy. It provided for the possibility of replacing OGAS magnetometer. Weapons include anti-submarine torpedoes or depth charges.

Flight and navigation equipment needed to provide flights over bezorientirnoy surface and automatic piloting during the flight to the target and to hover in the search area. For emergency water landing foreseen inflatable ballonets and alarm means for the crew. The engines had to have an emergency power mode, required on the event of failure of one of them. For the development of the power plant in Omsk at the plant named after PI. OKB Baranov organized under the leadership of VA. Glushenko. 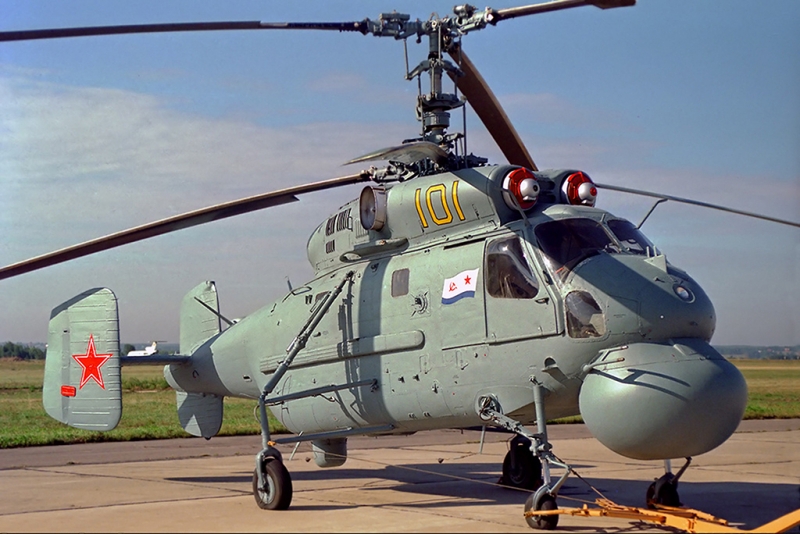 Two years later Kamov design bureau was given the task to create a transport-landing version of the Ka-25, for which ordered to develop a set of rocket weapons for firing at ground targets "Phalanx". Besides, of the helicopter weapons had to go unguided rockets TRS-212/132, CARS 160, 57 and ARS-57M and machine gun caliber 12,7 mm. Machine instructed to present to the customer together with the test in the III quarter 1962 of the year. It was also recommended to study the issue of the development of the Ka-25 guided missiles, "Dragon" and "Lotus". Looking ahead, I note, that the wishes of the customer and have remained on paper, but the air parade in Tushino summer 1961 It has been demonstrated by the Ka-25 with two sham brightly colored missiles. The first number in the factory Ukhtomsky 938 constructed in suburbs resource machine № 01-P, and zatem in option tseleukazatelya № 02-W. The third prototype was the helicopter ASW number 03-B. First on the flight test helicopter brought PLO ("DB"), separation which took place from the ground 11 May 1961 of the year, and the first helicopter circling, piloted by test pilot DK. Ephraim, — 20 June of the same year.

10 November 1961 Ponomarev, at the table lay a document signed Beliansky, which reported, that "Ka-25 was necessary finishing work and flight tests". As follows from the report, directed 24 August 1961 at the CPSU Central Committee, "As of 24 K-25 Augusta encountered 11 hours 36 minutes. In the test speed were achieved 185 km / h and height 1000 m. The flights were made with weight 5600 kg, and it is hovering near the ground with the weight 6600 kg. 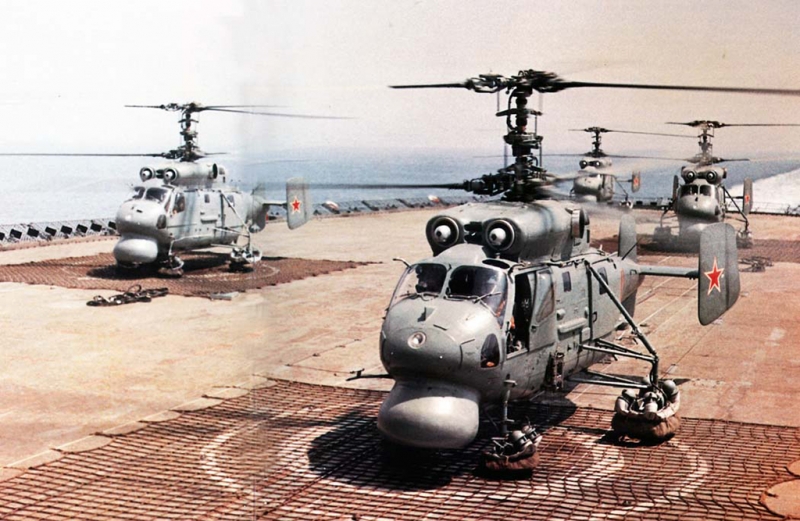 Preliminary tests of the Ka-25 flight weight 6100 kg showed, that the engine power 700 HP. It may satisfy the requirements of the Air Force on the helicopter hovering at a height of 50 m. In the instance of the resource Ka-25 production tests on 43 o'clock as a result of ground resonance, due to insufficient rigidity chassis braces, in the transverse plane there was a destruction of some components of the fuselage ". AT 1963 year Ukhtomsky aircraft factory built prototype of the "DC" helicopter. Outwardly it differed from its predecessor in the folding mechanism of the front landing gear, Interfering with "Initiative 2" circular scan radar radome with an increased (Log in complex Intelligence and reconnaissance «Success») and transmitting antenna radome automatic data transmission systems (ASPD) under the fuselage.

In the same year, a test pilot EI. Laryushin first raised the helicopter in the air, true, without equipment "Success". Factory testing machines continued until the end of the year, and at the same time it overflew NII VVS pilots. later AG. Solodovnikov rasskazыval: "The helicopter had automatic control system (HEALTHY), provides all flight modes up to hover above the water surface. The crew life support system includes sea rescue suits, provides long-term human stay afloat at the water temperature, close to zero. Impression of flying qualities of the Ka-25TS remains good. The machine is well managed - ACS makes the helicopter stable, and a set of navigation equipment - All Weather. The crew cabin is comfortable and had an excellent overview of outer space ". 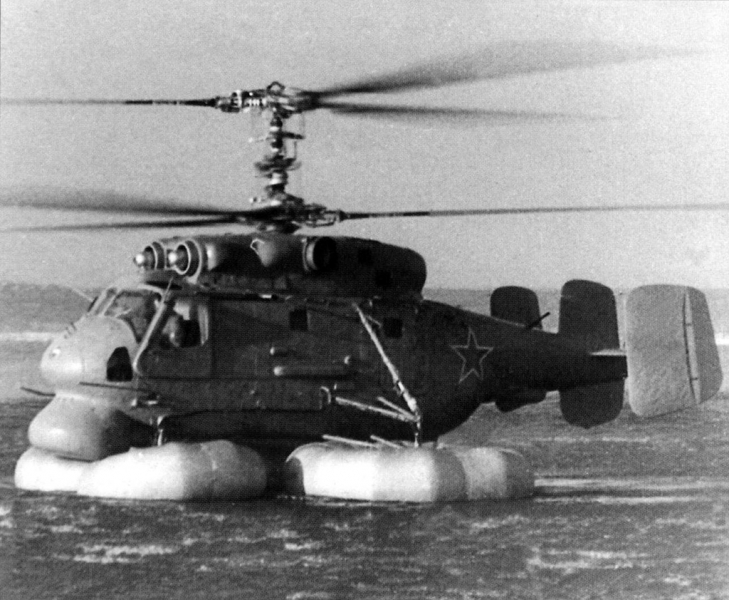 In 1964, Ka-25TS entered the joint state tests, held in Severomorsk on the ships of the Northern Fleet destroyer and cruiser "Grozny". Tests helicopter and naval equipment continued until October 1965 of the year, and almost immediately he began to enter the Navy under the designation Ka-25TS, although the complex took on a Navy aviation 2 December 1971 of the year. Ka-25TS able to patrol at a distance 200 km from ship-based. Onboard radar detects a target at a distance 250 km, after which the information was transmitted to the anti-submarine ship. Ka-25TS operated in the Russian Navy until the mid-1990s.

Serial production of the Ka-25 continued on 1975 year, during this time it was built 460 machines in a variant of PLO and 50 tseleukazateley. 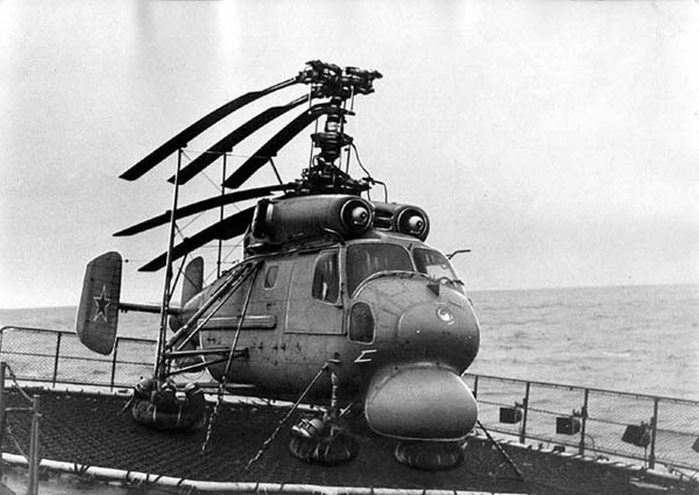 Ka-25 – Basic modification, created in order to test and check the feasibility of helicopter, the appropriate technical project. Subsequently, the whole emphasis developers moved to the Ka-25PL.

Ka-25BT – (BT - towing the trawl). Modification Ka-25 for mine waters from electromagnetic and acoustic min by haul. 12 helicopters this modification participated in international demining Gulf of Suez.

Ka-25BŠZ – (BSHZ - cord towing charges). Modification Ka-25 for mine waters from bottom mines by towing string formed charge. Created on the basis of the judgment of 8 May 1973 of the year.

Ka-25YV – Ka-25PL, converted to measure coordinate trajectories and fall ballistic missile warheads. It built on the basis of an order from 18 June 1962 of the year. Total converted 6 copies.

Ka-25ISK – Ka-25 Modification for adjusting shipboard radar. Created on the basis of the judgment of 10 Martha 1971 of the year. 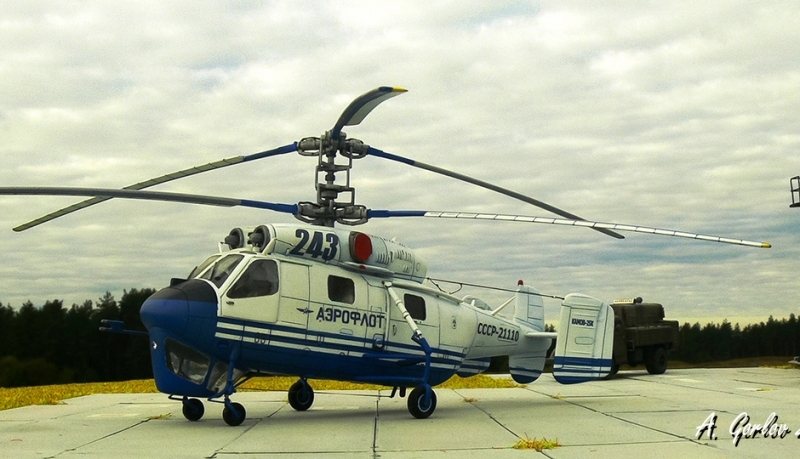 Ka-25K – Modification of the Ka-25 for the movement of goods. Helicopter abolished equipment for military use, and the forward fuselage installed suspended cabin for loading operator, which is able to control the helicopter during loading operations. The machine is capable of transporting cargo on the external load weight of up to 2 tonnes, and inside the fuselage to 1,5 tonnes.

Ka-25LZ – Modification of the Ka-25 to test new types of anti-submarine weapons. Created on the basis of the judgment of 28 October 1970 of the year.

Ka-25M – The project is a multipurpose helicopter on the basis of Ka-25. It was not implemented. 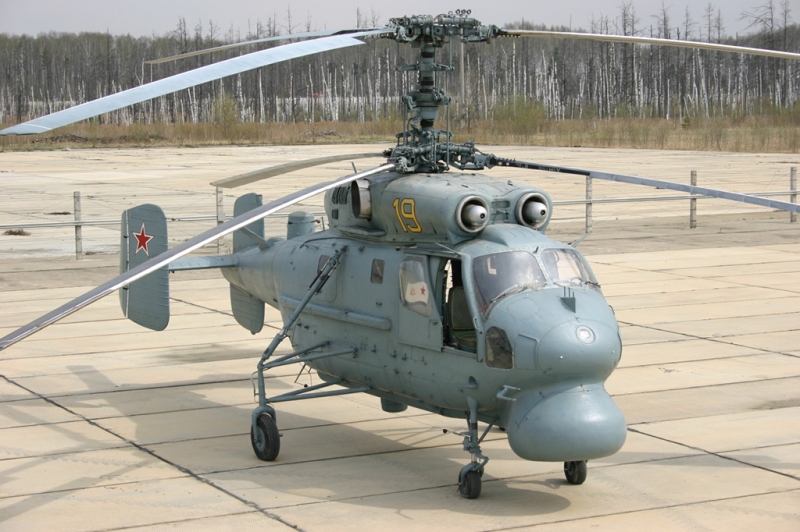 Ka-25PL – The main modification Ca-25 helicopter. The helicopter is designed to find and destroy submarines on-board means of detection and destruction at a distance of about 200 km from ship-based. All were released 275 machines of this modification. A helicopter equipped with the lowering hydroacoustic HCV station 2 'Oka' in the rear part of the fuselage, search radar "initiative-2K" in the nose cone and radiogidroakusticheskoy system "Baku" with receiving device SPAR-55 "Pamir". Also in this modification machines installed radio beacon transponders RPM-C, interacting with radar beacons of the "float-1A". In the embodiment, the search helicopter can carry and to apply 36 discharged radiogidroakusticheskih buoys type RSL-H "Willow", RGB-NM "Cinar" or RGB-NM1 "token", disposed in the container on the starboard side of the main chassis resistant. The helicopter can be armed with torpedos type AT-1, AT-1M, T-67, Apr-Torpedo-2 missile or anti bombs (PLAB 250-120, -50, -MK).

Ka-25PLS – ASW helicopter for use torpedoes VTT-1 "Swift". Created on the basis of the judgment of 5 August 1970 year and adopted in 1976 year. Feature torpedo "Swift" is the management-by-wire. Helicopter equipped with data transmission apparatus "Stork-K".

Ka-25PL – search helicopter, obtained by conversion of the Ka-25PL. Created on the basis of the judgment of 10 July 1967 of the year. It was used to search for satellites, splashed down in the Indian Ocean. 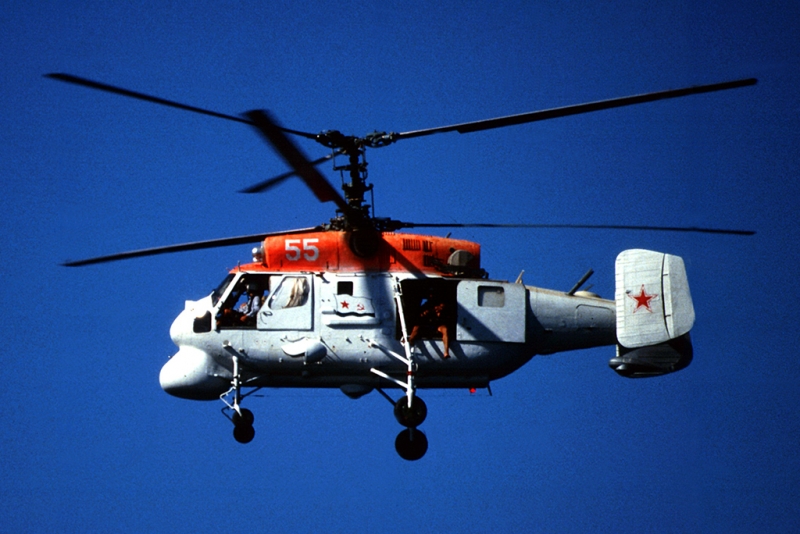 Ka-25PS – Rescue modification Ca-25, created by removal of the equipment from the Ka-25PL and designed to act on behalf of the Ministry of Defense. Designing machines began by order of the Commission of the Council of Ministers of the USSR Presidium of the 28 June 1972 of the year. With special equipment dismantled machines, but mounted winch lifting capacity 250 kg, equipped basket for lifting people, as well as additional lighting equipment and the drive station for direction finding emergency beacons.

Ka-25ROMB – Modification of the Ka-25 for electronic intelligence. It built on the basis of an agreement on the 1975 of the year.

Ka-25F – The project is based on the front-line helicopter Ka-25, Ski equipped with a chassis and an armed 23 mm cannon, NAR blocks and PTUR. 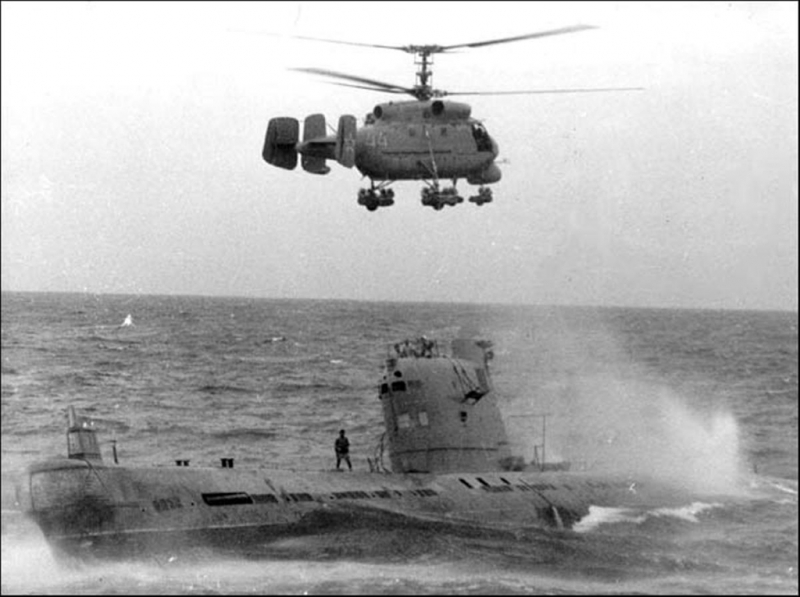 Ka-25TS – Vertolёt reconnaissance, designed to act in the interests of coastal and naval command and control centers, telling them the coordinates of targets, not available for direct radar detection. This modification helicopter developed simultaneously with modification Ka-25PL, because in the process of developing a single maritime helicopter it has not been possible to combine the functions of anti-defense and target acquisition in a helicopter, without going beyond the established limits on weight and dimensions. The helicopter of this modification makes the first flight 21 Martha 1962 of the year. There were built 50 machines of this modification. Ka-25TS is different from the Ka-25PL installing circular scan radar, mounted in the nose cone, and automatic data transmission systems. These systems are part of helicopter-ship complex reconnaissance and target designation "Success". The helicopter is able to patrol the waters at a distance of up to 200 km from ship-based, manufacture of radar surveillance and target designation within a radius 250 km and provide a relay within a radius 250 km. Helicopter abolished bomb doors (in their place are equipped with extra fuel tanks) and systems, necessary to detect submarines. retractable landing gear made in flight in order to avoid shading radar. Also on board is mounted winch, allowing the use of the helicopter as a search and rescue. The carried out modifications have reduced the weight of the car and increase the supply of fuel, which resulted in a greater range of flight and increased patrolling.

Ka-25s – Helicopter fire support of ground forces and naval assault. Armed units unguided rockets (THEIR). It built on the basis of a decision by the Ministry of Defense 21 February 1975 of the year. 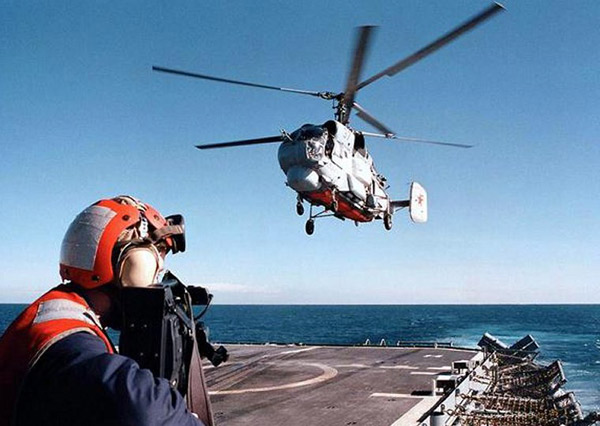 The performance characteristics of the Ka-25

Range of the Ka-25 flight 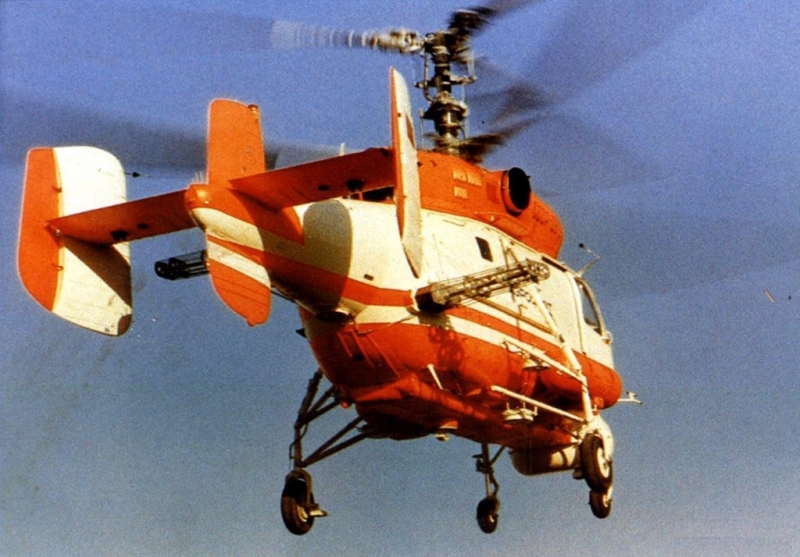 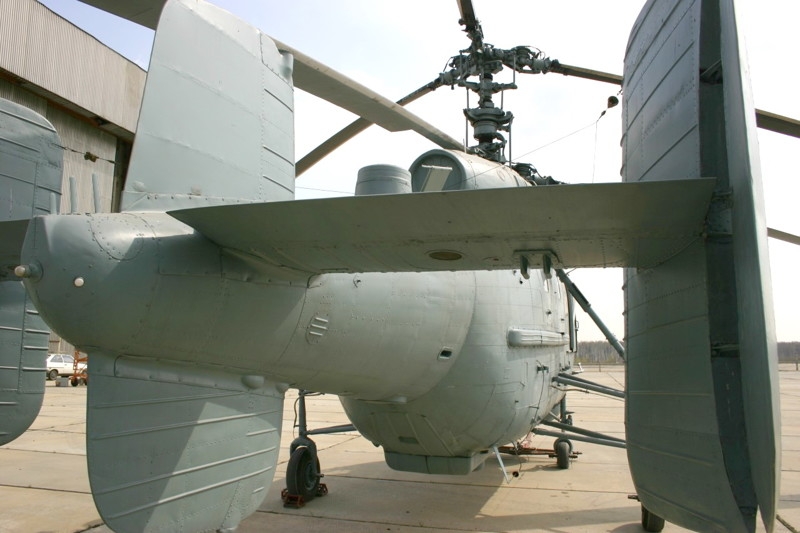 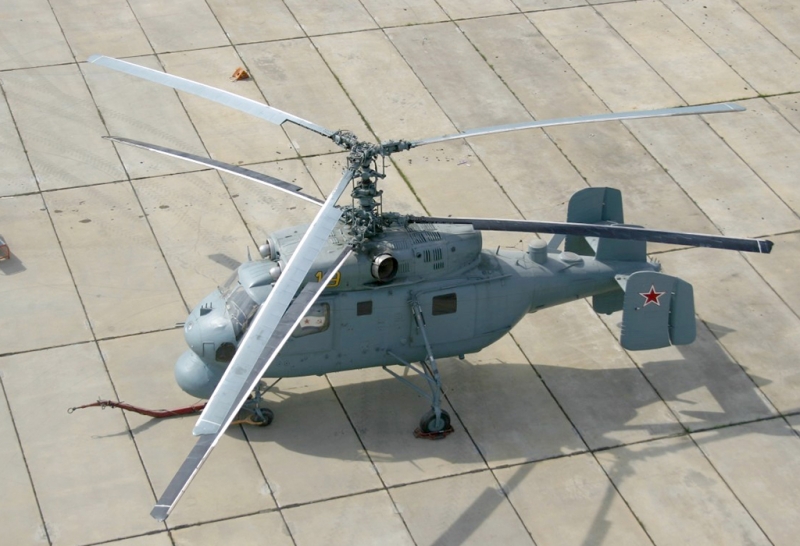 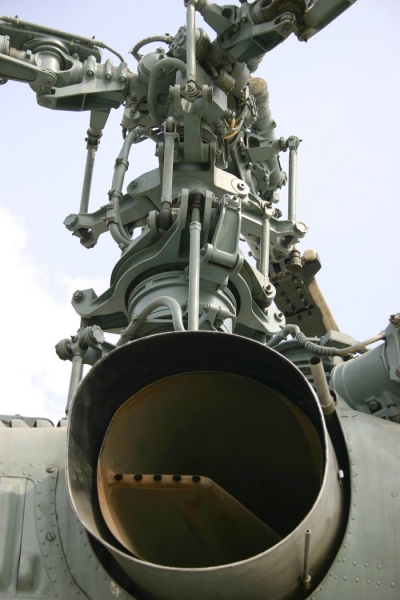 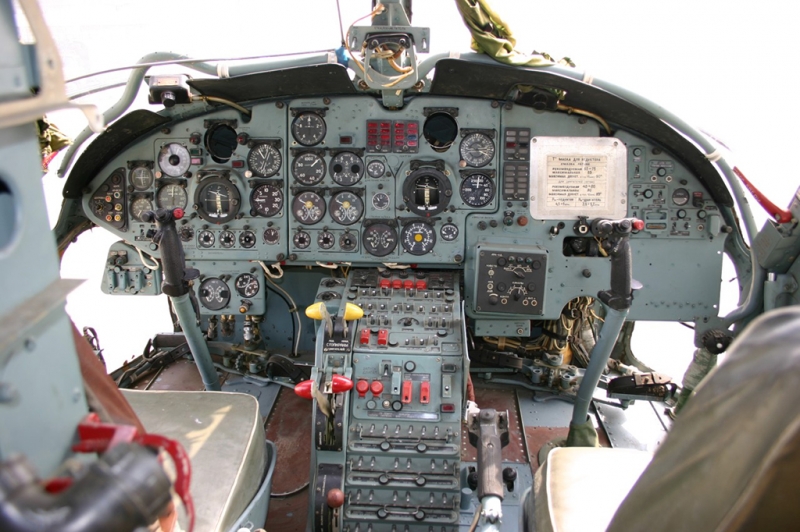 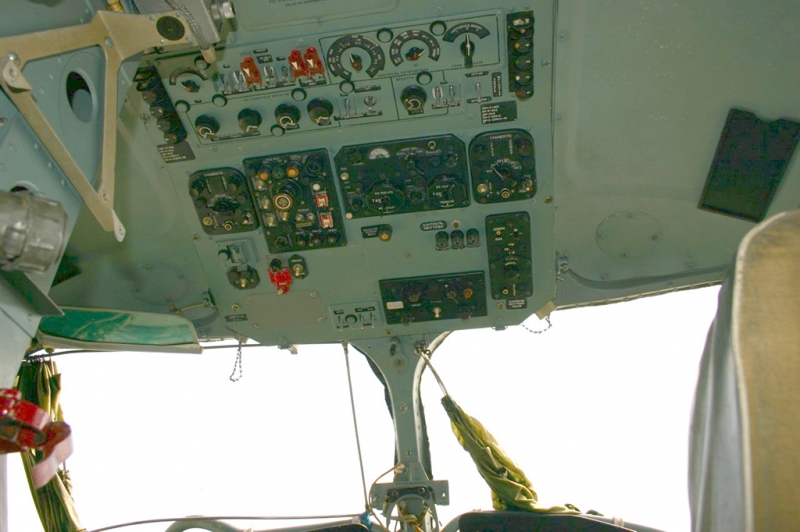 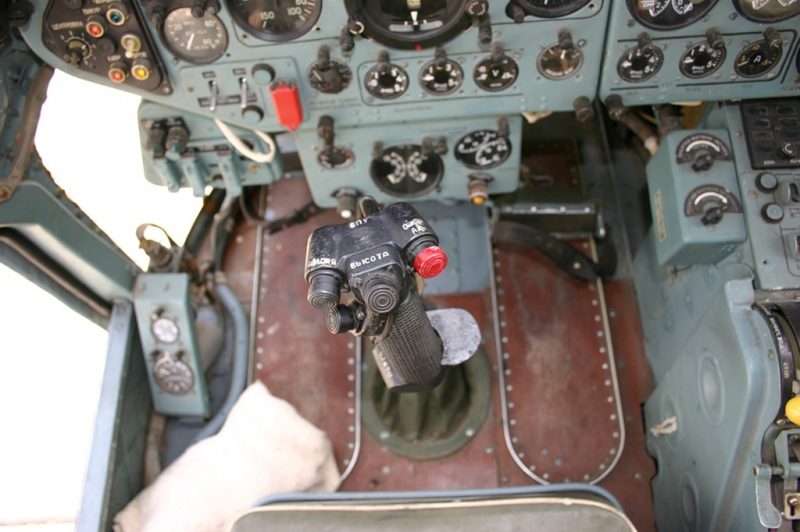 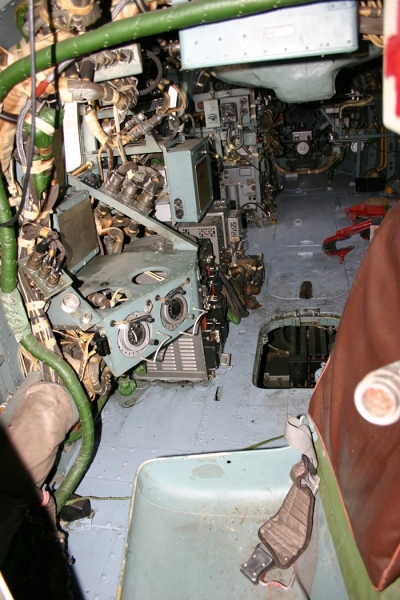 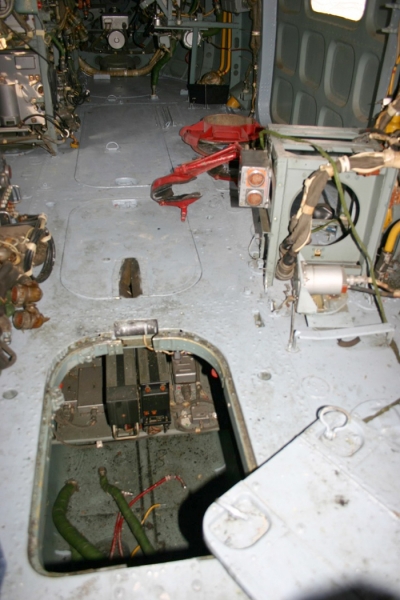 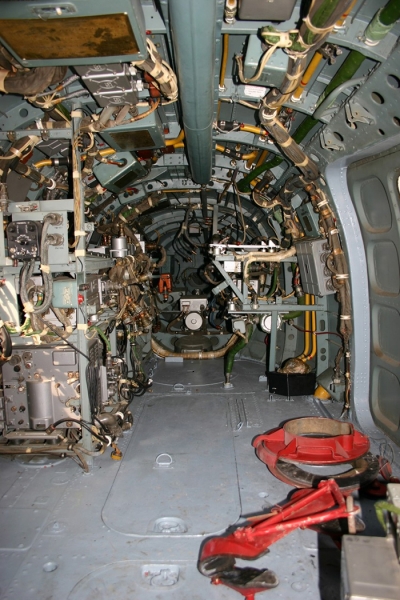 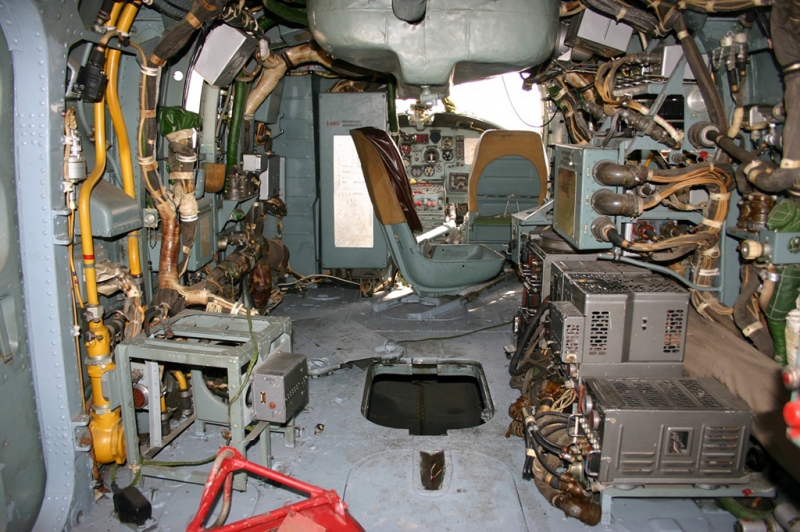 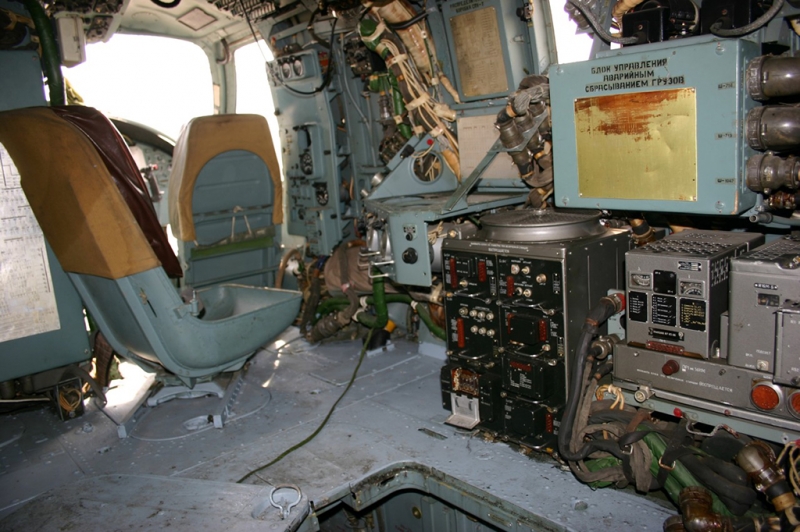 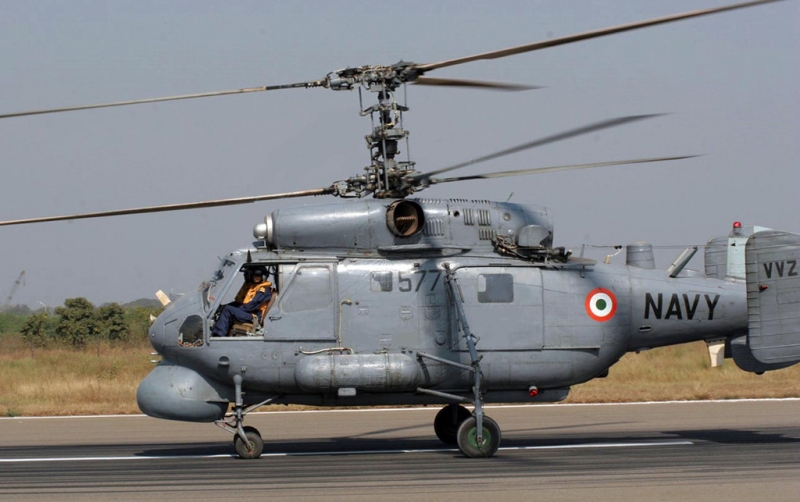 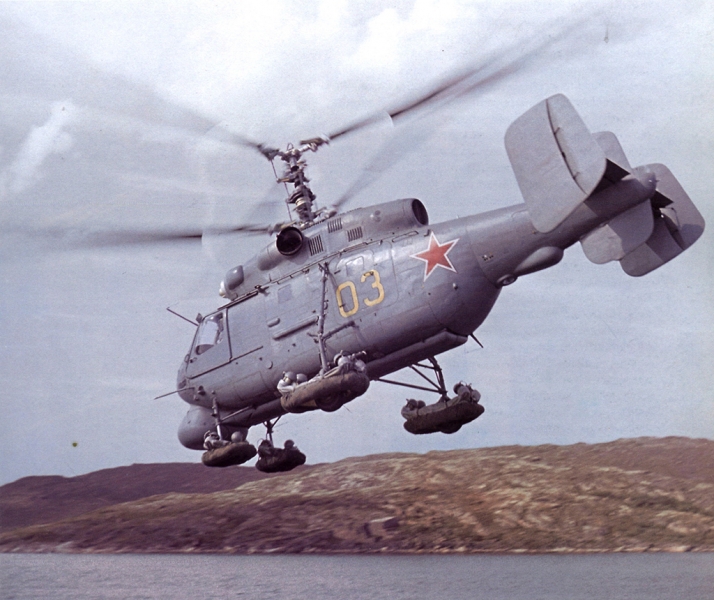 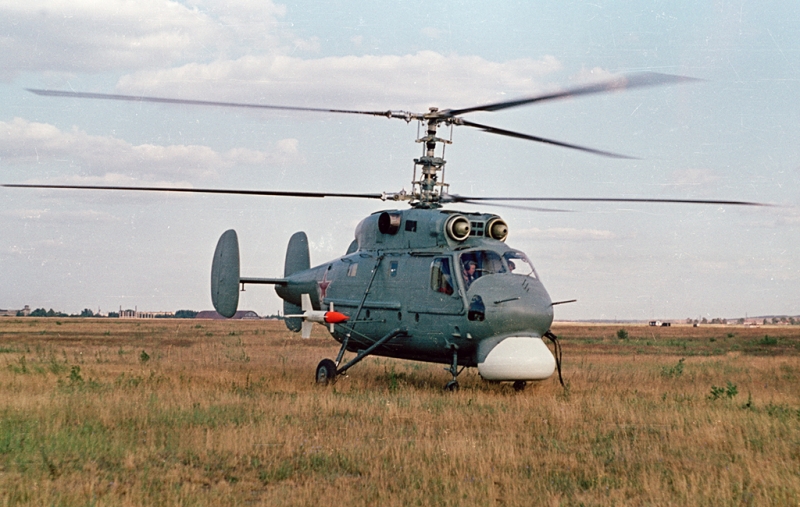 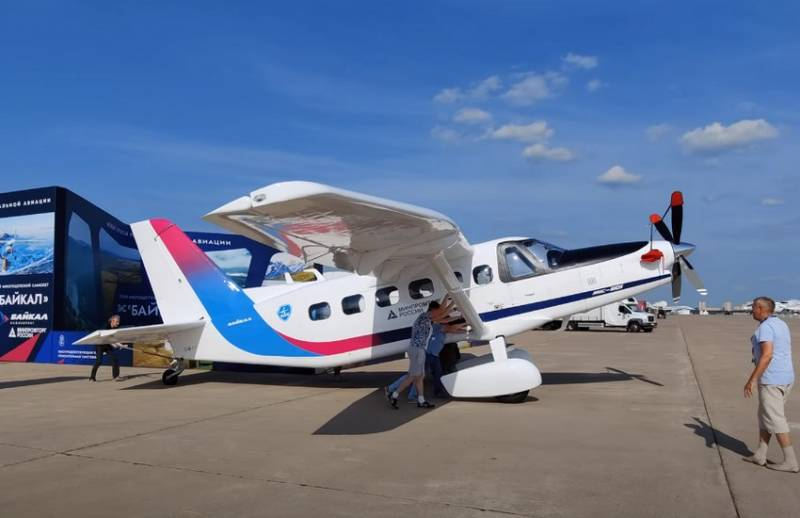 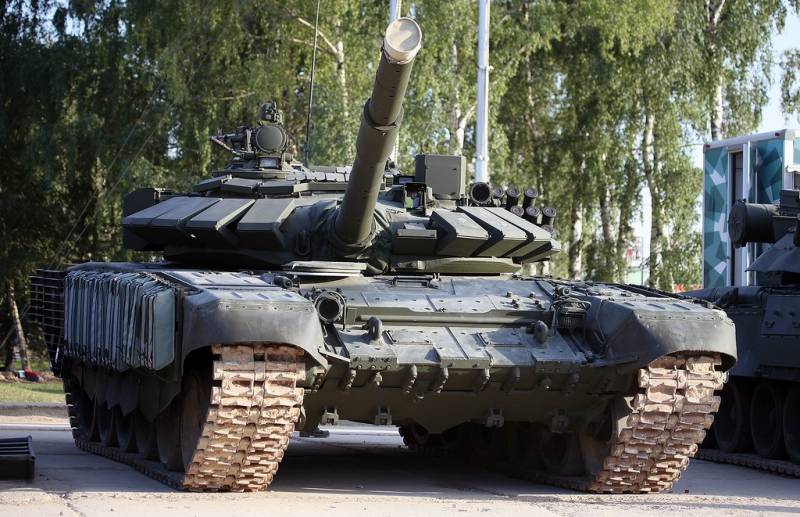