BT-5 (Socrates. fast tank) - the name of a series of light wheel-tracked tank (1930-years) on the basis of the prototype, American inventor sold in the Soviet Union J.. Christie. It is an improved version of the tank WT-2 in the direction of strengthening the gun arms and drive Soviet production, slightly increased height and weight. Designed for staffing mechanized and tank corps of the Red Army.

Serial production is organized on KhPZ in 1933 g. armament, booking, external communication means and patency BT-5 was not inferior uniformity him by weight Soviet tank T-26, and specific power, mobility and power reserve is significantly superior to the tank. Caterpillar tracks and suspension of rollers were easier than the T-26. The car was not difficult to learn, different ruggedness in maintenance and high mobility, thus popular among tankers. BT-5 was one of the main tanks RKKA pre-war. AT 1934 g. created its modification BT-7, having higher tactical and technical performance. 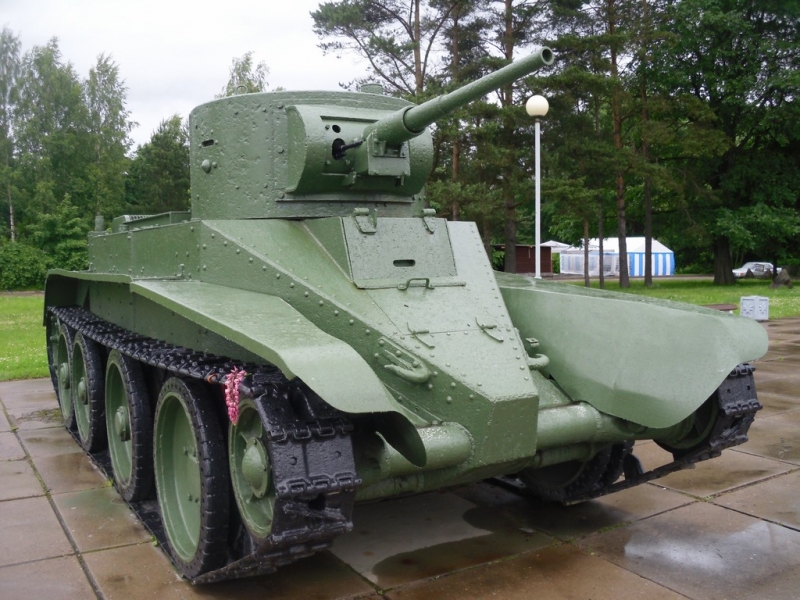 BT-5 It was a "hybrid" model, designed to replace the troops maloudachnyh structure BT-2. Housing BT-5 is virtually identical to its predecessor (except for the transition to the metric system), that was due to the requirements of the UMM RKKA "alteration should be made, not wedging into production " (modifications BT-4 and BT-6, differs from the original sample hull structure and a number of minor improvements, before the step of serial production and have not reached). Therefore, by "two", "Five" is distinguished primarily by the new elliptical tower on widened pursuit with 45-mm cannon with ammunition 20K 115 shots and machine gun DT; some tanks were second TD in the niche of the tower, some more and antiaircraft turret DT. crew - 3 people. BT-5 was produced in variants with and without a walkie talkie. Command tank was reduced with a radio and ammunition.

BT-5, BT retained layout scheme-2 tanks: front-office management, the average location of the crew compartment and aft engine compartment. The hull and turret of the tank frame, reservations bulletproof. Tower cylindrical shape with a recess in the rear part installed on ball bearing roof shell. Planting was carried out by the crew hatches, located in the frontal part of the hull and the turret roof. Armor rolled sheets, thickness of 6 ÷ 13 mm, connected by rivets. Frontal body sheets inclined at relatively large angles to the vertical plane, and the front sides of the sheets to the longitudinal axis of the machine, further increased their protective properties. In front of the fenders were sunshields, protecting vision devices from dirt and snow. tow hooks, located in the front and rear of the hull. 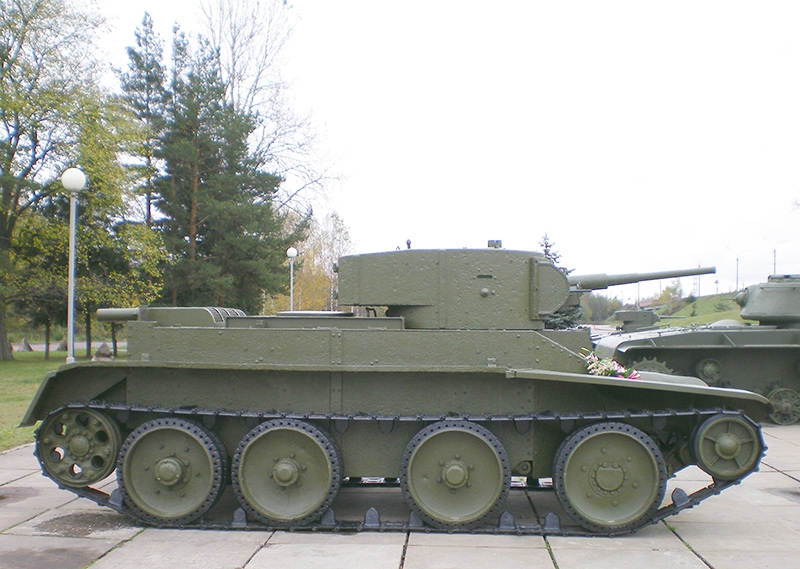 Includes 45-mm semi-automatic gun, set in a mask of the tower and coaxial 7.62-mm tank gun DT. The gun is designed for firing at tanks and armored vehicles, artillery, otkrytoraspolozhennym infantry fire weapons and manpower of the enemy, armor-piercing projectiles and shrapnel, had a good time because the tactical and technical performance. barrel length 46 calibres, range of direct fire 3600 m, the greatest - 4800 m. Armor-piercing shell weighing - 1,425 kg, starting speed - 760 m / s, He directs thick armor 32 mm shooting distance 1000 m at the meeting angle 90º. Rate of gun - 12 rds. / min, correcting crosstalk. Aiming at direct fire from the gun and coaxial machine gun, monitoring the results of the fire and its adjustment is carried out with the help of armored optical sights TSMF and PT-1. The design of the tower provided the opportunity to conduct a cannon and machine gun fire circle in the horizontal plane, pointing angles vertically from -6 to + 25º. ammunition includes 115 artillery shells and 2709 rounds (43 shop). The commander's car was located 72 gun shot. As a surveillance device in a combat situation applied peepholes with glass blocks, located in the front of the case and side surfaces of the tower. 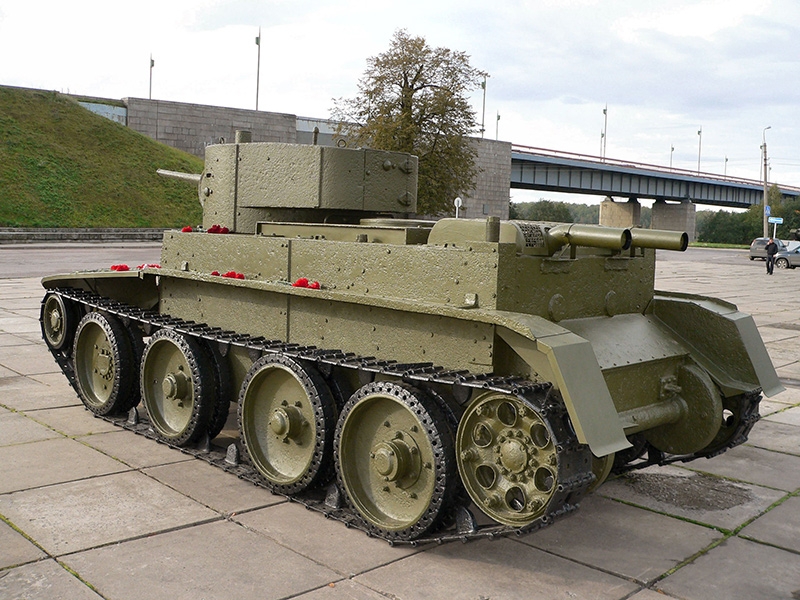 Means of external communications were signal flags, and command vehicles were equipped with armored Reception telephone and telegraph simplex radio 71-TK-1 with the handrail antenna, posted on tower. radio station, installed in a niche of the tower provided a connection with the phone mode at a distance 15 km hodu and 30 km in the parking lot, and parked in telegraph mode - up 50 km. Internal communication provided tank intercom TPU-3 for three local.

Aviation engine, mark M-5: 12-cylinder, V-shaped Carburetor, liquid cooling, power 294 kW (400 HP), allowed to reach the speed of 50 km / h on tracks and to 72 km / h on wheels. The engine was placed longitudinally in the stern of the hull, the toe of the crankshaft in the direction of the stern, I had a relatively small mass-dimensional parameters, respectively: 410 kg; 1754× 691 × 1073 mm. Fuel - Aviation gasoline. 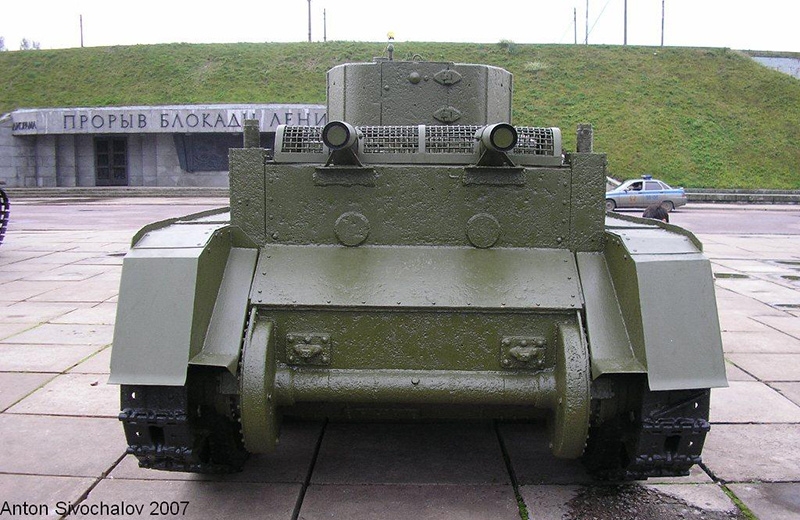 caterpillar tracks (for a board) consisted of: krupnozvenchatoy track chain ridge engaging with the open-joint, four rollers with a diameter 815 mm, guide wheels with a track chain tensioning mechanism, rear drive wheel arrangement with four driving rollers. The supporting rollers have an outer cushioning in the form of rubber bands. suspension of the individual (independent). As the elastic members used helical coil springs (candles), connecting the rocker rollers with the housing. The springs are arranged vertically within the housing (in the first support roller - horizontally).

In the transition from caterpillar drive on the wheel, Crawler chain shot, stacked on shelves and mounted nadgusenichnye belts. The rear hub rollers mounted blocking ring, connect them to the drive shaft guitar. The standard time required to move the car with the crew on the crawler wheel (and vice versa) not exceed 30 min. To control turning on crawlers tank had two arm in the driving compartment, by longitudinal rods associated with friction clutches, and move on wheels - a steering wheel with a rack steering, rods connected to the front road wheels driven. When driving on tracks steering wheel filmed.

electrics: formed by one wire circuit, board voltage 12 AT. Ignition system Batareynaya. Candles each row of cylinders of the engine ignition energy obtained from its transformer allocator, It represents a combination of high-voltage coil-distributor chopper. Start the engine to make the two electric starter or using a crank, starter gear mounted on in the fighting compartment. 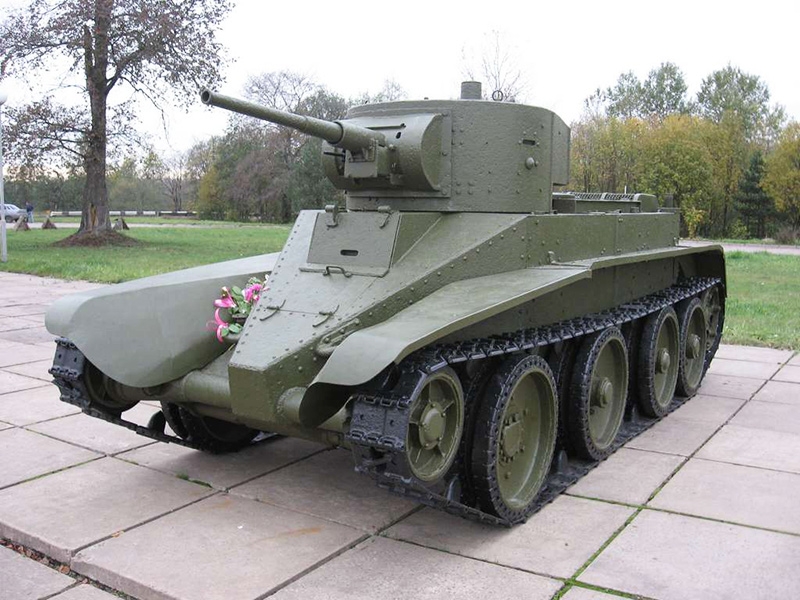 crew, three persons: commander, gunner and a driver. The commander and gunner were placed on the seats in the crew compartment on both sides of the gun, and a driver - in the department of management. The commander further served as a radio operator and loader.

Release BT-5 KhPZ started in March 1933 of the year, when they were handed over last 37 piece BT-2. Due to the continuity of designs, first 16 Machines were brought against military acceptance already 22 Martha. Total results 1933 the year it was commissioned 1005 unit BT-2 and RT-5, However, in a report, compiled military representative KhPZ, stated that, that in the second half of the year, compared to the first, significantly increased the percentage of defects (9-41 % against 5-8 % machines per month). BT-5 to improve the build quality was only in the middle 1934 of the year. 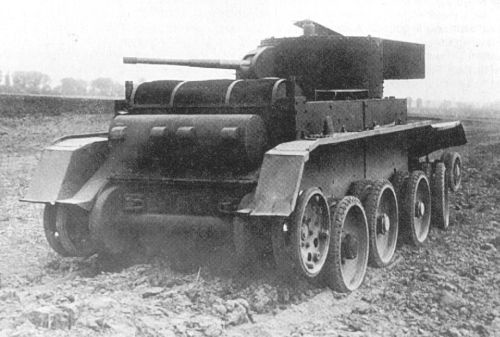 Tower machines of the first series were made of so-called "technological armor" (ordinary steel or non-hardened armor), all were put 30 nebronevoy towers and 10 of the non-hardened armor. Completely replace their armor was only in 1935 year.

for armor steel towers fed Izhorsk (PI brands) and Mariupol (brands MI). Both types of towers have a reservation of 13 mm. Weight equipped welded tower without weapons and ammunition amounted 675 kg, and with arms and ammunition - 1100 kg. Rotating tower was carried out manually.

MI armor bilayer, what it was to provide more bulletproof than with single-layer armor PI. Total "Mariupol" towers with a small niche was released 230 pcs. These machines were sent to the disposal of educational institutions and training battalions of mechanized brigades. 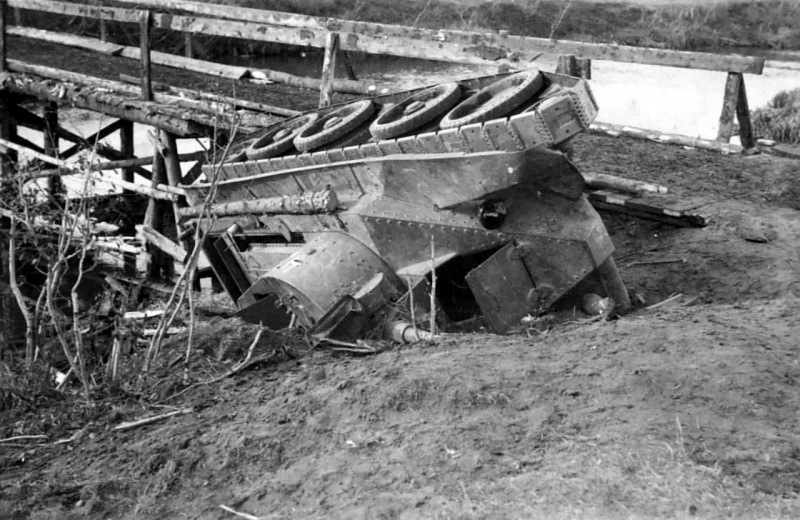 Soviet Light Tank BT-5, rolls onto its side at a wooden bridge

But in June and July 1934 of the year, After summarizing the data on the operation of serial BT-5, it was decided to switch completely to the tower at the Izhora, initially designed for installation on modernized tanks T-26, as MI armor had a number of hidden defects, involving chips, cracks and edges incontinence. By the time the silica-manganese-molybdenum steel was increased viscosity obtained on Izhorskij, so Bronevoi NKTP Decree of the Council for the production of tanks BT-5 takes the armor Mark from.

The only state, which supplied tanks BT-5, was Republican Spain. 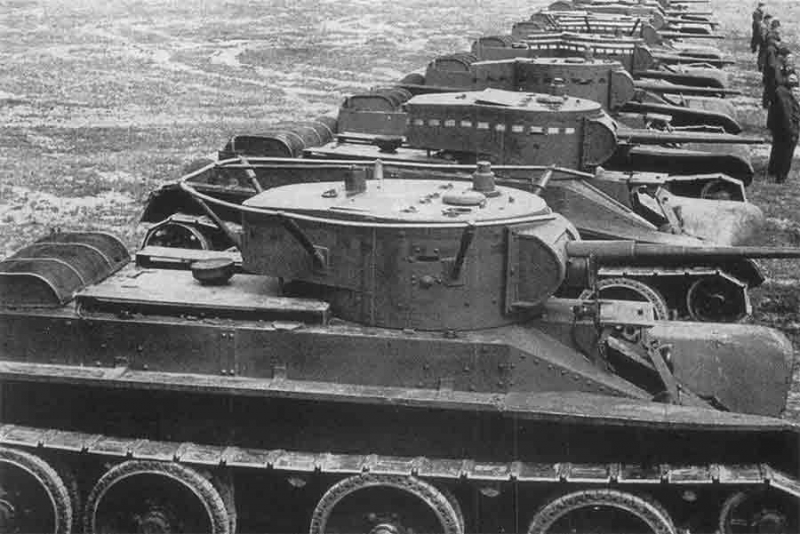 It was irretrievably lost before the start of the Great Patriotic War 122 tanka: Halhin-Gaulle – 75, liberation campaign in Poland – 1 and the Soviet-Finnish War – 46. 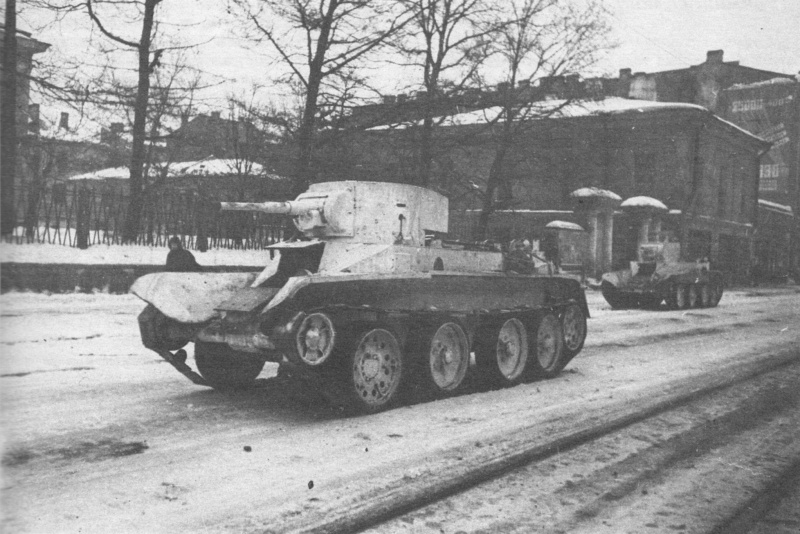 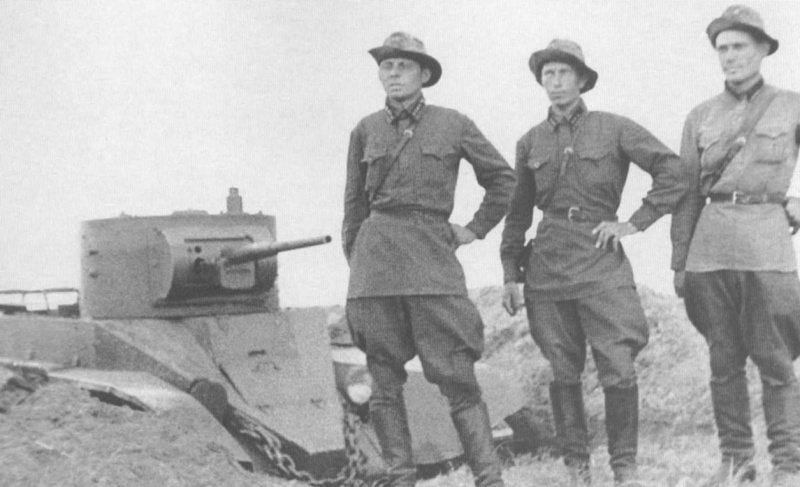 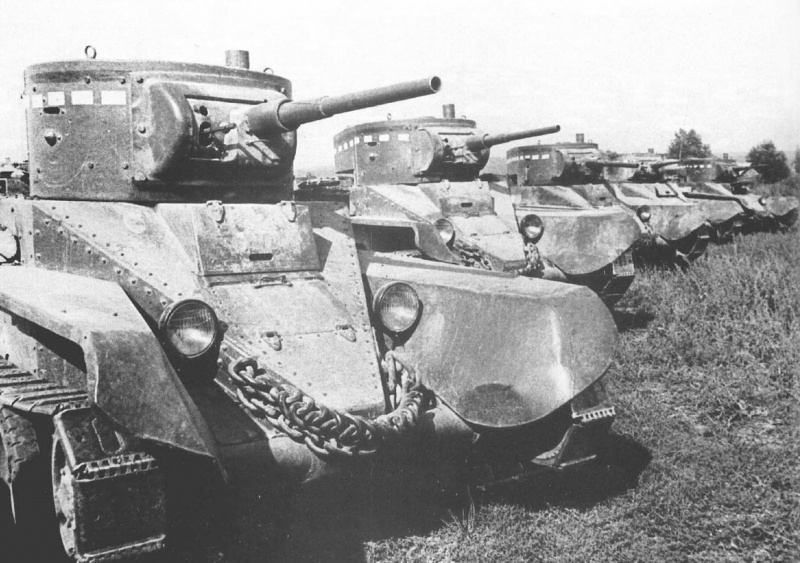 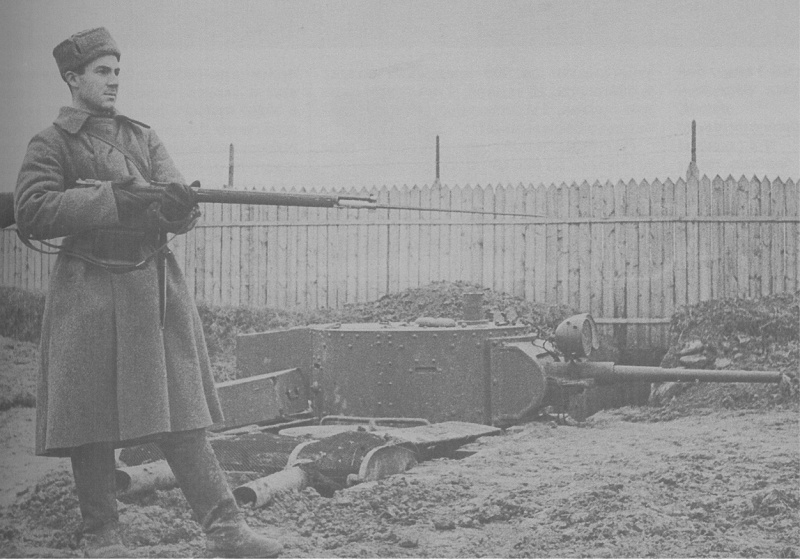 Faulty tank BT-5, dug into the ground on the outskirts of Moscow. The machine was upgraded in 1938-1939 year (by type BT-7). fighter standing in the foreground - probably, of the Moscow People's Militia, since armed French Lebel rifle of World War I era (old weapons stockpiled and used for weapons hastily created military units). 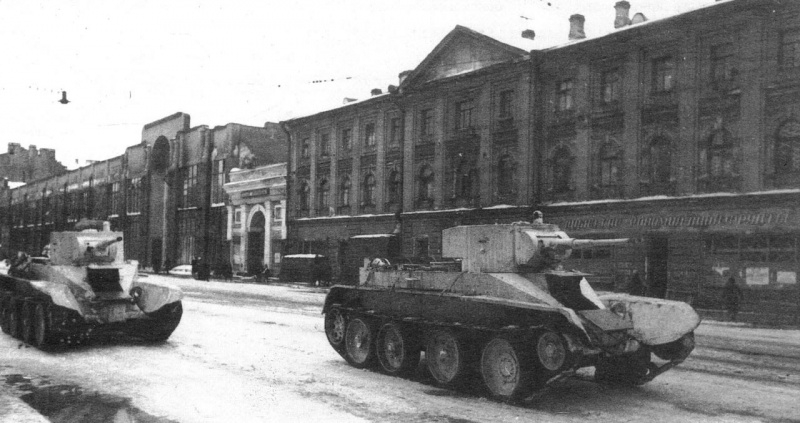 blockade of Leningrad. BT-5 tanks are directed to the front along the avenue Volodarsky (now Foundry Avenue) 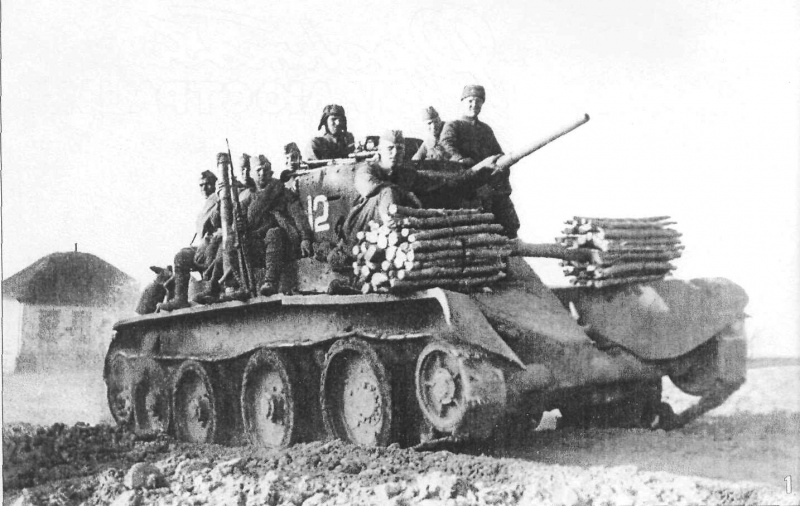 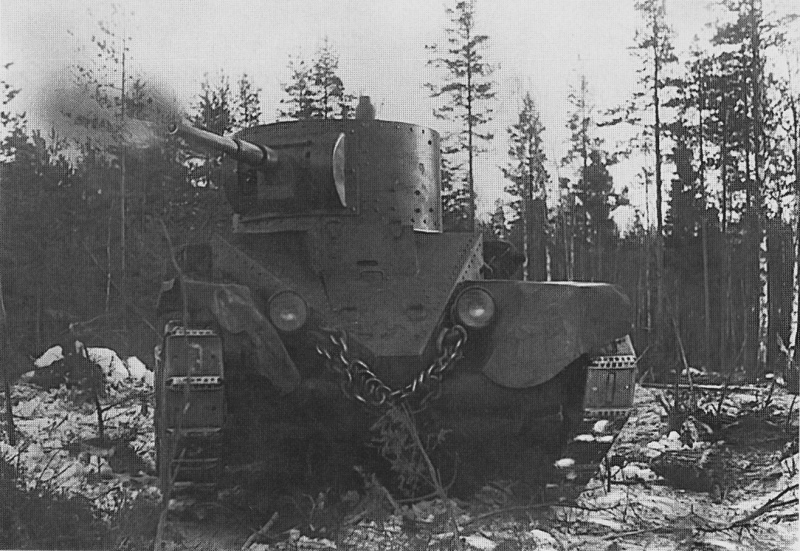 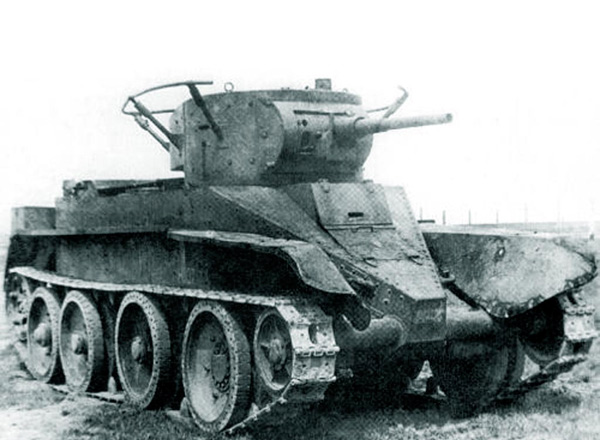 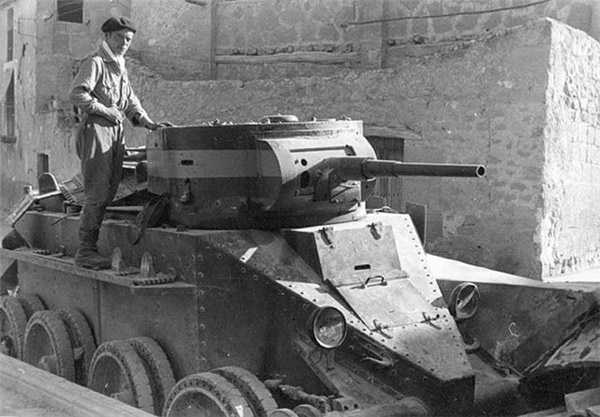 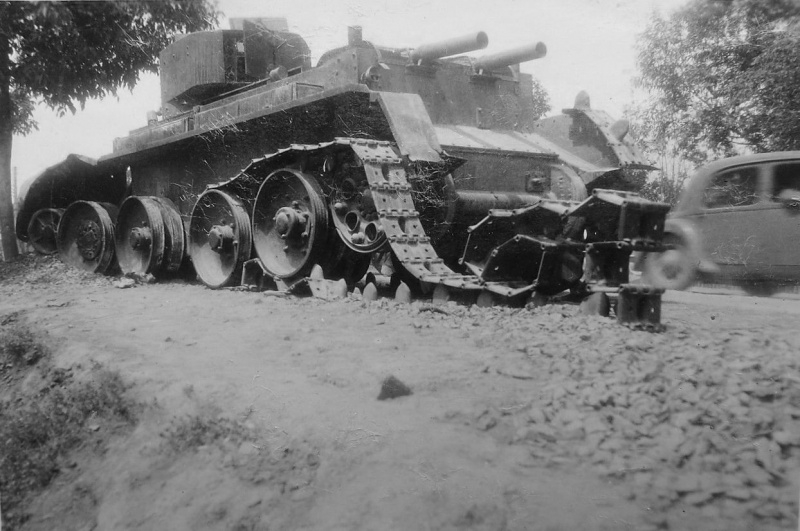 Soviet Light Tank BT-5, cast and crew destroyed. This machine is not characteristic of the WT-5 cylindrical silencer to stern (removed when upgrading).