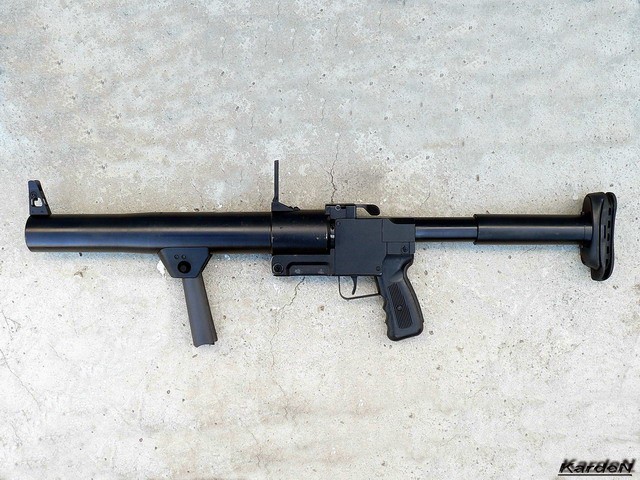 Creating a multi-grenade launcher CSG-50 began in the mid 1980 g. AT- result after performing a number of works in the late 1980s was created and adopted for the new grenade launcher Special. The complex consisted of 50-mm hand grenade CSG-50 (Hand Grenade Special) shots and grenade lachrymatory-irritant (HS50), svetozvukovogo (HS350) and shock-shokovogo (EG50 and EG50M) actions.

In the future, the complex was complemented by grenade shrapnel (G050) and cumulative (HK50) actions, ammunition for knocking door locks (HV50), grenade for instant smoke screen (GD50) and a grenade to break glass (BK50). It was also upgraded grenade lachrymatory-irritant (GS50M).

Grenade CSG-50 is a single-shot weapon with reclining (like a hunting rifle) smooth barrel. The special features of construction and operation of a grenade launcher parts and mechanisms applies to5 that upon opening of the barrel through vzvoditel force is transmitted to the trigger, mounted within the housing. Wherein the mainspring is compressed, and the hammer in the cocked position is fixed. When you press the trigger, This force is transmitted to sear, which, turning on the axis, out of engagement with the trigger. Trigger under the action of the mainspring rotates on its axis, strikes the primer of ammunition, there is a shot. The hammer pin after application, due to rebound spring, returns, so that the striker could move away from the capsule to open the barrel after firing. At the same grenade rolled back, compressing hydraulic brakes.

In the late 1990s, the RPS-50 grenade launcher was modernized and received the name RGS-50M. For a more comfortable hold a grenade launcher under the barrel was set foldable handle. Gidropruzhinny recoil brake is replaced by a spring, improved trigger mechanism.

RGS-50 grenade launchers and RGS-50M are classified as heavy grenade, that apply to the distant approaches to the trapped object (to 150 m). Neutralization of enemy fighters with special ammunition provides special units of approaching the object of attack and the effective use of their staff weapons. The presence in the ammunition grenade launcher fan of the harmful effect of various anti-terrorist units allows us to solve a wide range of combat missions during various special operations. It is the presence of ammunition for various purposes makes the whole complex, multi-purpose weapon. So, eg, Shot with light and sound grenade action NHS-50 provides significant psychophysiological effect on the terrorists are in the same room for the purpose of temporary disruption of bodily functions. The defeat of the live purpose made a bright flash of light (no less 2 KIM) and the sound pressure on the organs of hearing (no less 135 dB). With the explosion of grenades no mechanical submunitions. 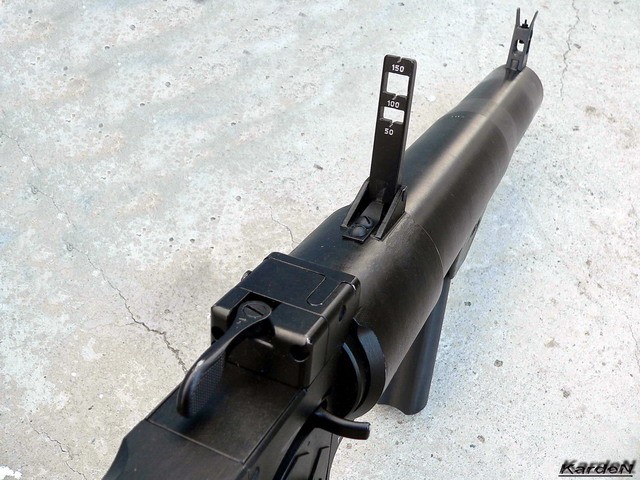 Effective engagement of targets is provided by a single live shot EG 5CX striking elastic shock stun element weighing about 85 g. this shot safely neutralizes human unprotected for a short time at distances of up to 40 m. This provides maximum human safety, even in case of accidental contact of the projectile head.
Also for the temporary neutralization of multiple target at a distance of up to 10m or unobservable purpose room designed in a shot with rubber buckshot EG 50M. Defeat live targets is provided by sharing the psychological effects of sound and fire a shot-blast and shock destruction rubber canister. total weight 56 rubber elements canister is about 140 gram, and the diameter of the circle of expansion at a distance 5 m - less 1,5 m. Firing a shot EG-50M may be produced not only from a grenade CSG-50, but the firing device from the portable CM-50, which can fire with one hand. Weight US-50-1,5kg5 dimensions - 406x84x64mm. Effective firing range to 10 m. 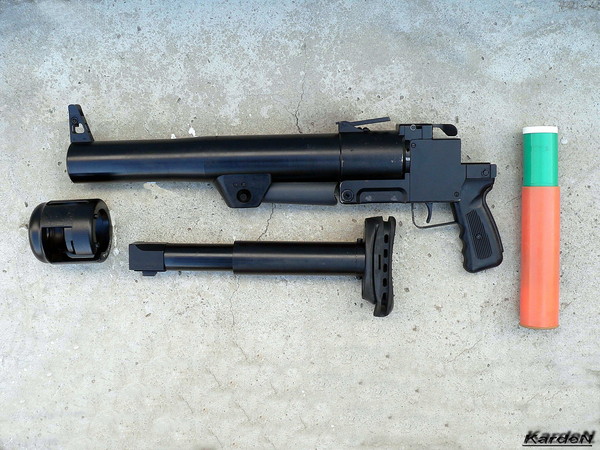 Also for temporarily neutralizing terrorist groups or individual offender used indoors shot grenade lachrymatory-irritant heavy-weight of about 50M 400 gram. Neutralization of offenders is achieved by blasting a dispersible powdered composition lachrymatory (chloroacetophenone (CN). High-contact mechanical fuse provides a guaranteed operation grenade after its meeting with the object and the instantaneous creation of intolerable concentration lachrymatory. With the explosion of ammunition no mechanical submunitions. To ensure latent maneuver by instantaneous smoke screen used DG-shot 50 - with a smoke grenade. A showcase glasses to break and provide penetrating a building through the window openings used shot grenade VC-50. 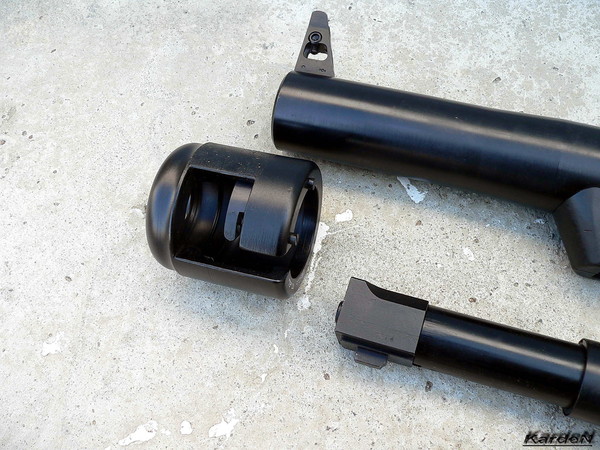 For training shooters during training shootings used grenade shot from a practical SG-50GM Overall and weight and ballistic performance training shots correspond shot HS-50M. Granata has gear inert warhead. The composition of ammunition grenade RGS-50M to destroy live targets and technology also includes fragmentation grenades and cumulative effect. So much for the defeat of live targets at a distance of about 100 m on the ground, as well as in open shelters, in skinned vehicles or smokers having window openings used shot with fragmentation grenade GO-50. Fragmentation grenade lesion area is up to 7 m in a radial direction and to 20 m in the firing direction with scattering angle 20 city. Garnet can be equipped with contact-remote or contact fuze. 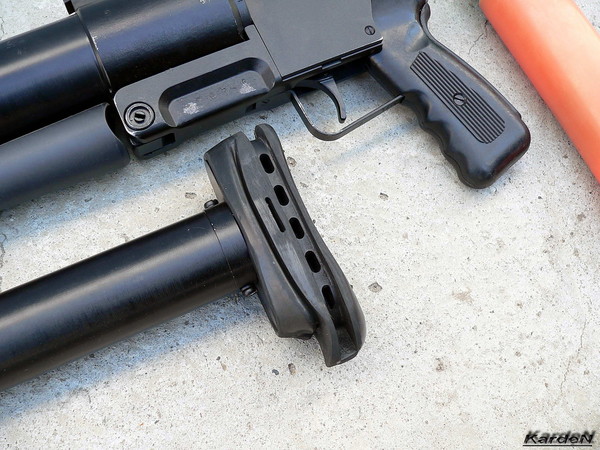 Partial destruction of components and assemblies of vehicles, followed by its stop, -It is performed with a cumulative shot grenade HA-50. In this striking element cumulative grenades can penetrate 20 mm aluminum plate, and at a distance of more than 7 m in the radial direction no submunitions. Together with a set of technical means "Knocked AP1" launcher CSG-50M can be used for emergency opening of the door by the door lock dismantling. The kit includes shots of HS-50 with a special hammer and the muzzle brake device. A set of "Knocked Up DP-1" provides an opening wooden doors: when mounted on the launcher muzzle brake device fixedly to the door except for the possibility drummer penetration barrier, when firing without installing muzzle attachment, from a distance 3 – 10m penetrable barrier impactor for.

For almost twenty years of operation grenade CSG-50 (RGS-50M) has proved an effective weapon of anti-terrorist units of the security forces. 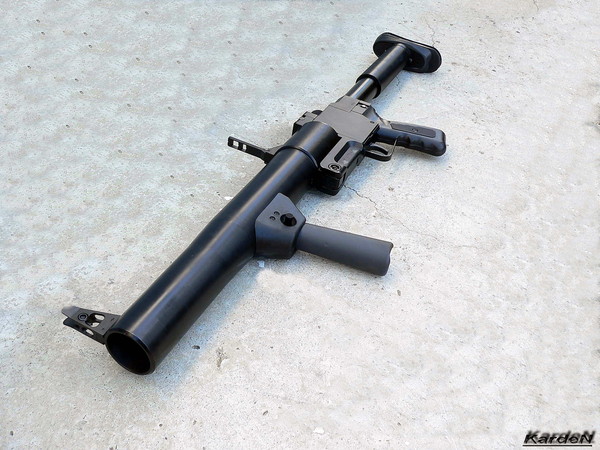 Ammunition for the RGS-50

For shooting from the RGS-50 and RGS-50M several variants of shots have been developed, including: 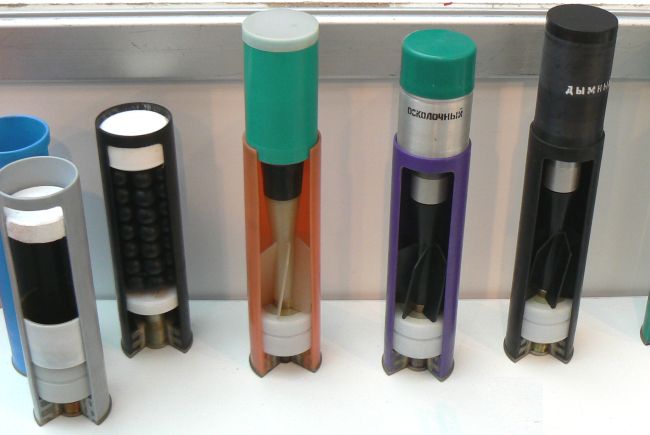 ammo variants for RGS-50M with the split sleeves (showpieces). 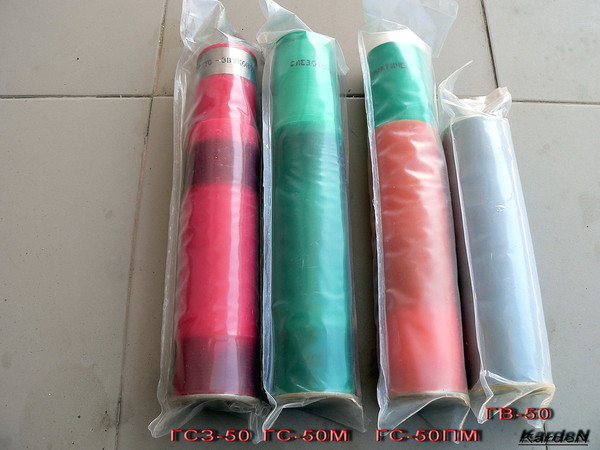 The performance characteristics of the CSG-50M 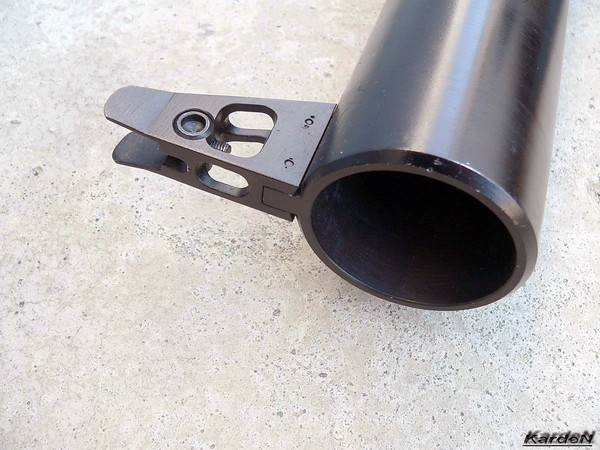 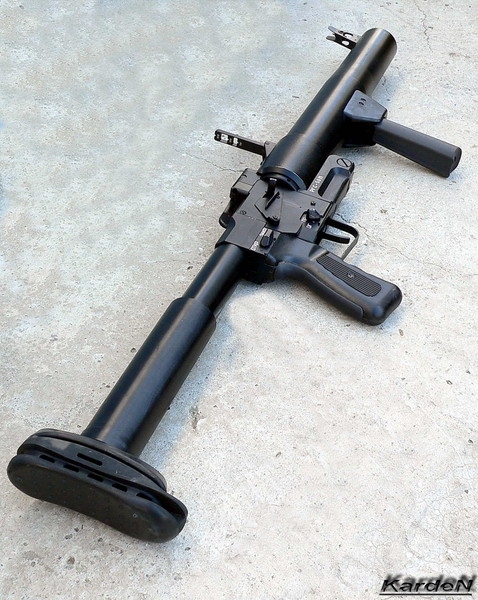 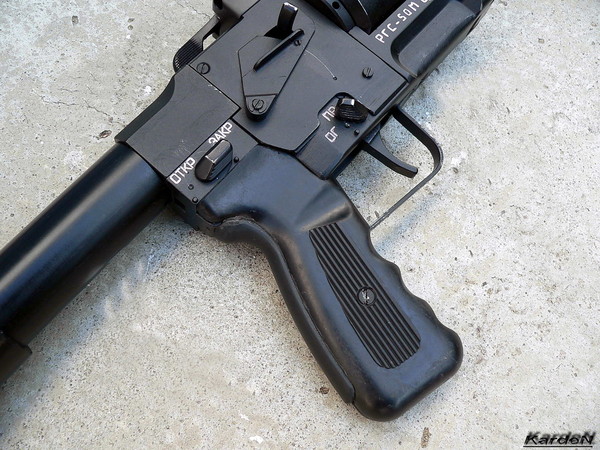 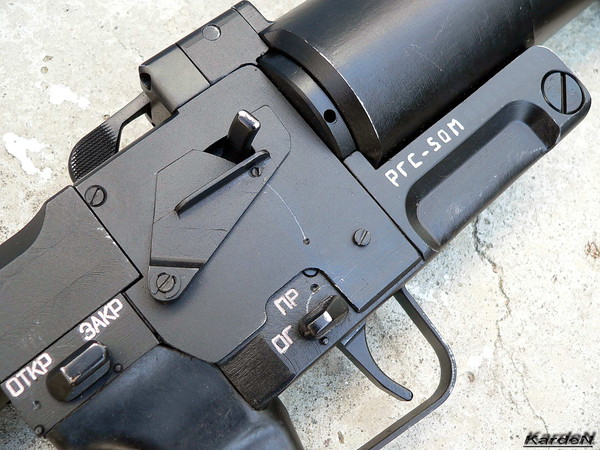 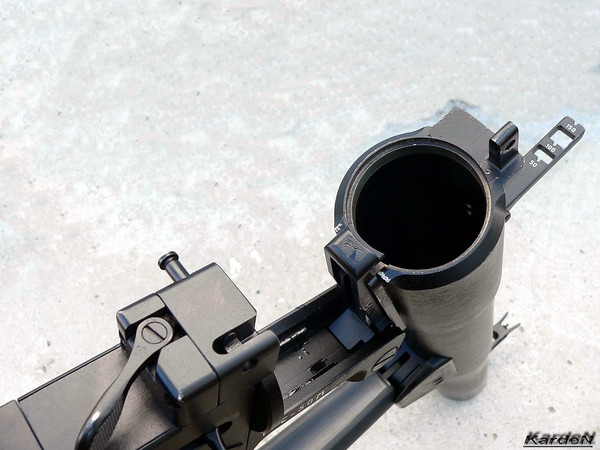 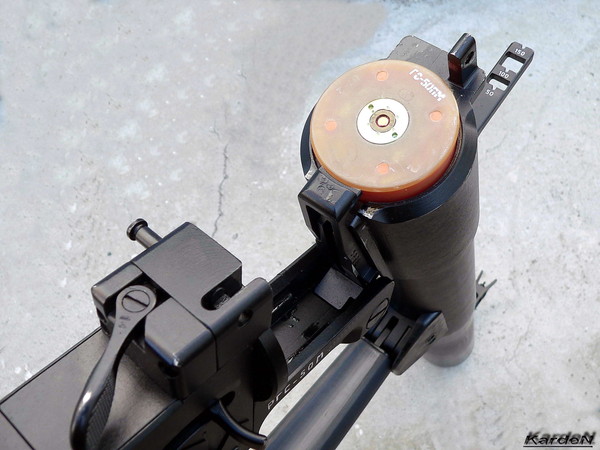