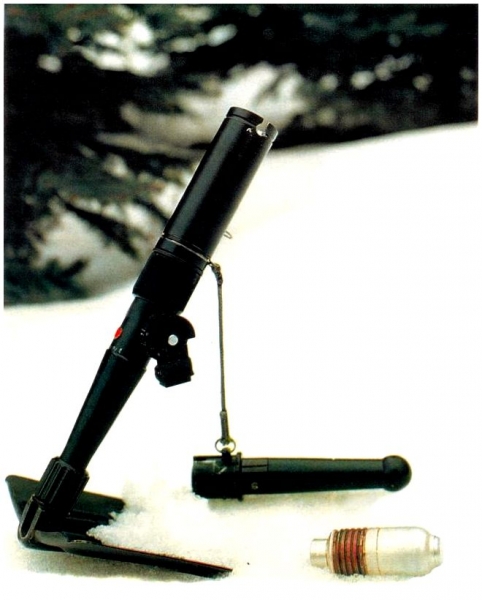 At the end of the 1930s in the USSR, the original type of mortar was created – 37-mm mortar-shovel, adapted according to the scheme unitary barrel. Mortar-shovel consisted of a barrel, shovel – support plate and with a stopper bipod. The total weight was 2.4 kg.

Barrel 37 mm mortar-shovel consisted of the breech and tube. The pipe is connected tightly with the barrel breech. The breech of the firing pin is pressed, on which is superimposed capsule expelling cartridge mines. The rear part of the breech ball ended in fifth, which serves for the articulated connection to the barrel plate (shovel). Barrel and a shovel hinged joint formed one-piece. For connecting the barrel with a shovel in its stowed position in the breech there rotating ring. 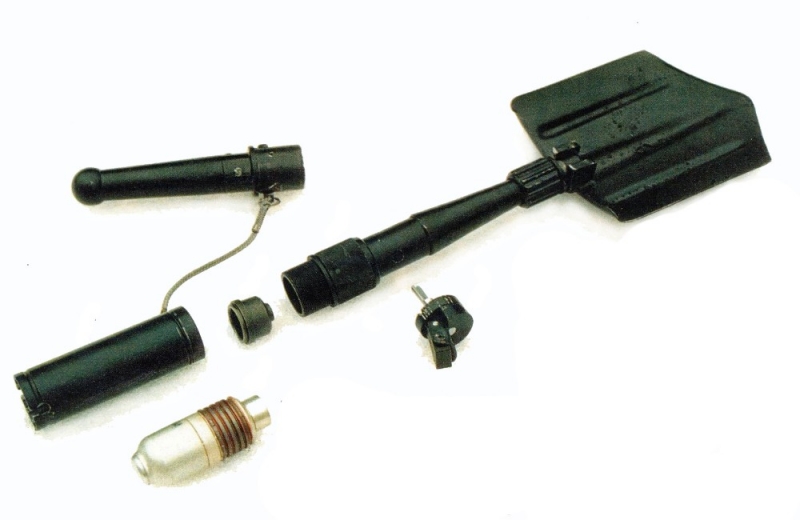 Fry served to support the trunk and in the stowed position was placed in the trunk. The barrel with the muzzle-stoppered bipod. Before shooting bipod is connected to the barrel by means of a spring SIRC. Any sights in mortar missing, shots were fired on the eye. For firing of mortar-shovel it has developed an original 37-mm fragmentation mine weighing about 500 grams at an initial rate – 65-70 m / s. Mines were transferred to a bandolier. Minimum range of weapons was - 60 m, and the maximum - 250 m.

In the stowed position the mortar-shovel he was an ordinary shovel, which could be used for its intended purpose for the equipment infantryman positions. Dig a shovel-mortar needed, holding it by the barrel, which in a canvas cover thickness, protects hands from freezing or scalding, exceeded 40 mm. Handle shovels served mortar barrel length 520 mm, a shovel blade during firing played the role of the base plate and are made of armor steel, not punctured by a bullet caliber rifle 7,62 mm. In a combat situation, the shovel quickly turned into a weapon, suitable for shooting 37-mm fragmentation mines. 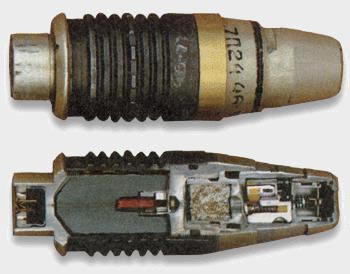 in winter 1940 year using a 37-mm mortar-shovel in fights in Finland low efficiency was found 37-mm mortar shells. It turned, that the range mines at the optimum elevation angle is small, and shrapnel effects weak, especially in winter, when almost all the fragments stuck in the snow.

In view of the sharply negative attitude to the Soviet infantry 37mm mortars their production was discontinued, and removed from service and 37-mm mine. Nevertheless, mortars of this type were used during the Great Patriotic War. The most widely used mortar-shovel compounds found in partisan. For conducting harassing fire and effective marching soldiers firing weapons capabilities were quite full. However, the lack of sighting devices and the associated low accuracy, as well as the weakness of fragmentation mines were the main causes of the extremely negative attitude to the mortar in a regular infantry. More accolades mortar obtained by fighters of the 4th Airborne Corps during the landing operation near Vyazma in January-February 1942 of the year. The German army is a mortar-shovel became known under the name «Russischer Spatengranatwerfer». 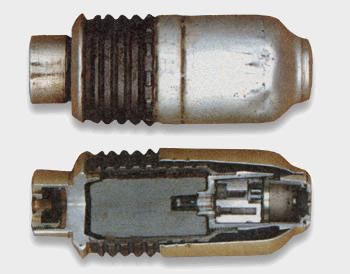 AT 1978 by designer TsKIB COO Victor Rebrikov returned to the idea of ​​combining a shovel with support arms. By this time in the Soviet Army was already a small folding shovel and infantry fragmentation grenade VOG-25, used in the grenade launcher GP-25, which served as the starting point for creating a shovel-grenade.

As conceived by the shovel-launcher designer intended for the crews of combat vehicles, squad, as well as for all men, armed with assault rifles, no grenade launcher, forced to dig in and acting on the front and in the neutral zone.

When designing the arms, it was decided to keep the nominal length and diameter of the spade handle at the top and bottom of the, where the shovel-covered hand grenade when digging. weapons of mass – no more 2 kg, at a weight shovels 1,2 kg. increase 0.8 kg to the weight of standard shovels determined only by the required strength and shooting conditions was negligible compared to the new quality, has acquired weapons. 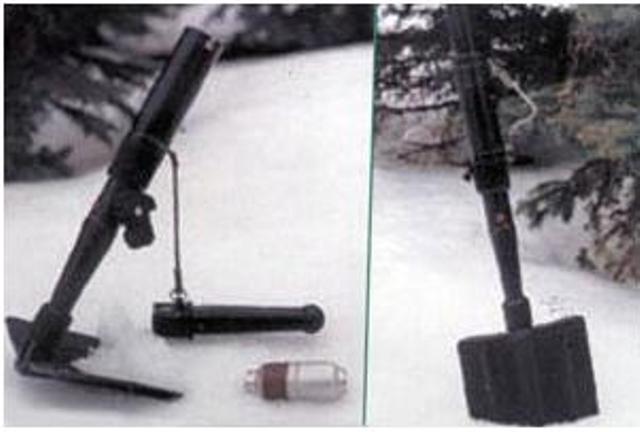 By weight and size grenade-shovel “option” It does not differ from the standard small blade sapper.

Since the product has been proactive, index TKB (Tula Design Bureau) it has not received and the remaining articles "Variant". Compared to its predecessor – mortar-grenade-shovel shovel different topics, that the shooting was carried out regular VOG-25 and claims to the effectiveness of grenades, in the 1940s to mine, did not have.

"Variant" as opposed to mortar supplied with an eye-quadrant, placed when carrying in the trunk. The spade-grenade capsule broke forcibly, that allows shooting with any positive and negative angles, including the spur of the moment. Established at the end of a wooden handle shovel and spade diameter coverage space at the bottom of the hand, near the blade clamping nut, consistent with those of a small folding shovel Infantry. In an embodiment of the grenade launcher wooden handle - the plug was removed from the weapons.

With the consent of the Chief TsKIB CoO. Bakalova two samples grenade-shovel "Variant" was produced. Working with the first shot was held with the participation of military acceptance. 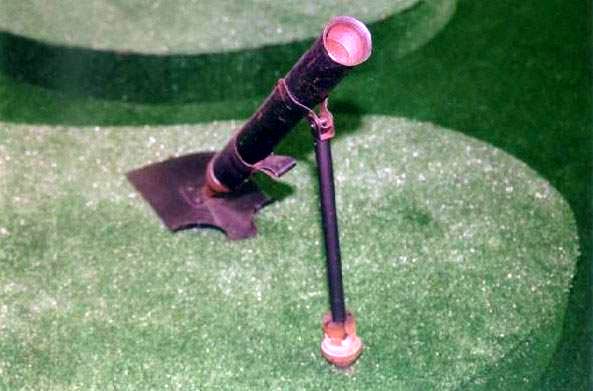 To identify all the qualities and the possible use of a shovel-grenade, both in the field, and in urban areas, set of tests was conducted. New weapons when firing from different positions and fastening established itself on the positive side, showing a flat line results when tested on different soils and surfaces (from marshland to the asphalt and brick wall) with different angles of elevation. When shooting with the focus shovel shoulder, with a fixed angle of 90 ° to the shooting axis of the blade, return was comparable to a gun-shot 12 gauge cartridge "magnum". And since the recoil when firing spade was no moment of force, shot on an axis, even if the rough tip "from the hip" accuracy was acceptable and depended largely on habituation and training of.

AT 1981 year on the shovel-launcher "Option" inventor's certificate has been issued. However, this arrangement has not gone into series, remaining within the framework of the prototype.

The performance characteristics of a grenade-shovel "Option" 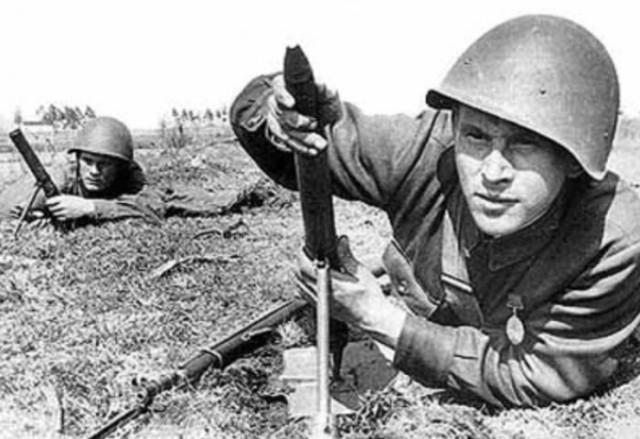