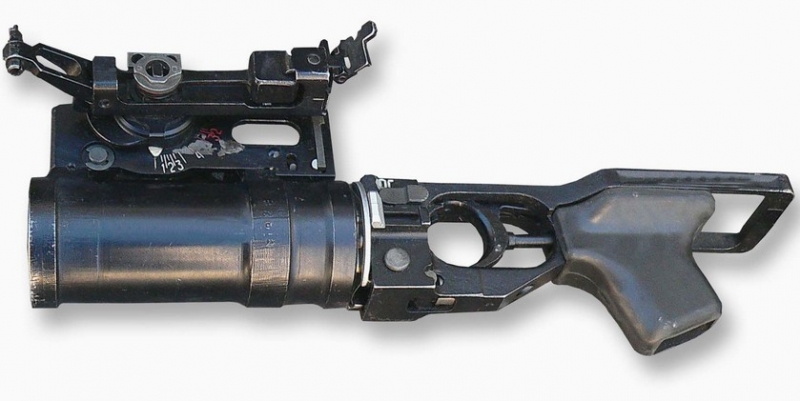 GP-25 "Koster" – barrel-attached grenade launcher. AT 1971 g. the task was given to the development of a 40-mm grenade launcher for OCD “Bonfire”. The Central Design and Research Bureau sporting and hunting weapons (TsKIB COO, g. Tula) this work was headed by VN Designer. calf, as already had experience creating SGK.

The work was done jointly with SSPE "Device" (Moscow). The result was the adoption of the service in 1978 g. GP-25 single-shot grenade launcher “Bonfire”, for use in combination with AKM, AKMS, AK-74 and AKS-74. However, the massive supply of rocket-propelled grenades at the troops began only in 1980 g. – this required experience of the first months of fighting in Afghanistan. grenade manufacture forged Tula Arms Plant.

40-mm attached grenade launcher GP-25 is an individual weapon, and is designed to destroy the open manpower, as well as manpower, located in open trenches, trenches and on reverse slopes of the terrain.

Grenade used in combination with 7.62mm and 5.45mm Kalashnikov (AKM, AKMS, AK74 and AKS74). When attached grenade launcher gunner in zavisimotsi the task can fire both from a grenade launcher, and a machine gun. 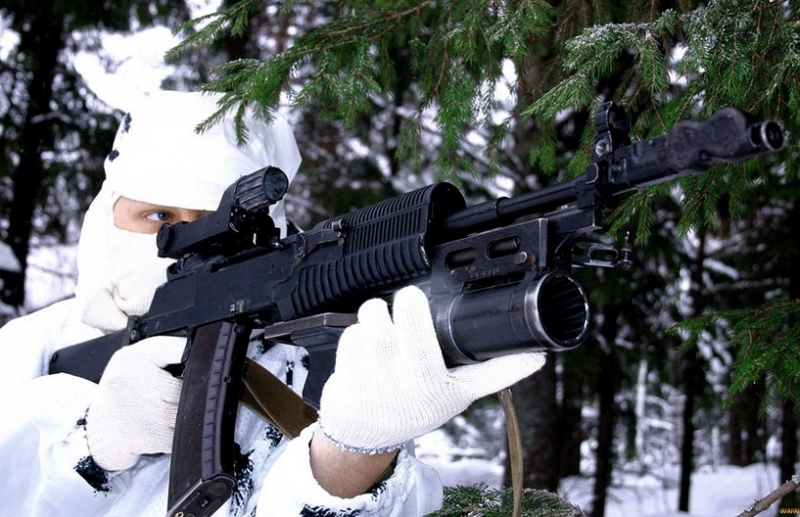 A grenade launcher consists of 3 the main parts:

Kit consists of a grenade:

The barrel has a length 205 mm (about 5 caliber grenade launcher), its channel is made 12 helical rifling right rotation. Shot, invested in trunk, It is held in a spring-loaded latch. If necessary, the shot can be removed from the barrel by means of the extractor – special rod with a thumb button. While pushing on the latch extractor, free grenade and remove it from the trunk.

Bracket with guard serves to attach the grenade launcher on weapons – it is installed on the fore-end machine, and its latch locks the GP-25 under the barrel. Front bracket has a spring damper.

The trigger mechanism – samovzvodnыy, trigger type. When you click on a straight line moving downhill that his hook pulls back the hammer, compressing the mainspring. Upon further withdrawal of the hammer descent back darts hooking. turning, he sends forth pivotally associated drummer, breaking shot blasting. On the left side of the housing, a fuse box at two positions – “ETC” (prevention) and “OG” (Fire). Pregnant “ETC” guard locks the trigger. There is also a kind of circuit breaker: special lever system locks the trigger at the wrong joining SE-25 to the machine. 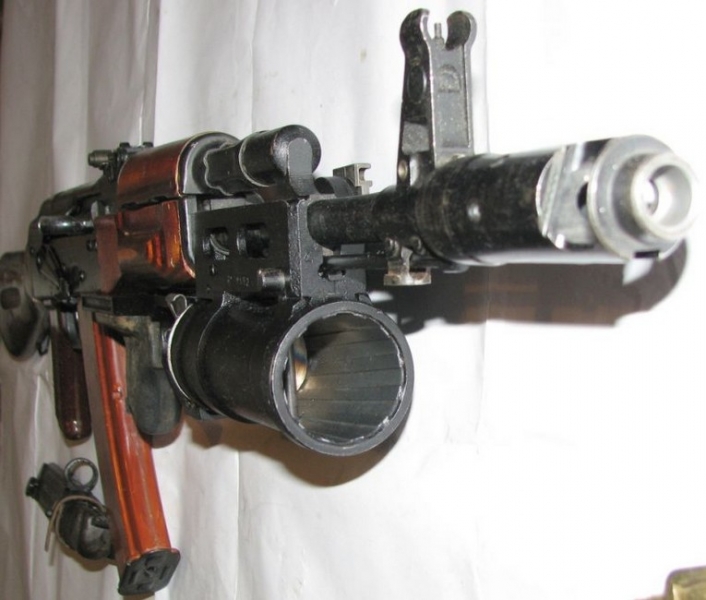 For the convenience of shooting to the body trigger mechanism mounted hollow plastic pistol grip with a hole for the thumb. Shooter-hander “working” with a handle, and the descent of the left hand. Sights are designed for direct fire or the half-blank. They are mounted on the left side of the bracket, here applied in a remote scale with graduations arc. For direct fire are hinged rear sight and a movable front sight. When installing a sight at a distance of a few special cam shifts the body flies toward: thereby to derive a correction grenades. Half-route guidance is carried out: towards – with the help of the rear sight and the front sight, in range – using the distance scale and a plumb, suspended by the sight axis (method “quadrant”). A half-leveling is performed with plunging fire. Maximum sighting range as a plank, and plunging fire is 400 m, minimum distance of plunging fire – 150-200 m. About the accuracy of fire can be seen in such figures: at a distance 400 m median deviation contact points comprise pomegranate: in range – 6,6 m, on the front – 3 m. for comparison: firing of 30mm automatic grenade launcher AGS-17 “Flame” in the same range gives median deviation: 4,3 m range and 0,2 m on the front. Should be considered, that the steep path a great influence on the flight grenades and firing results provides crosswind. Amendments on the side of the wind can make offset flies.

Special measures have been taken to mitigate the impact of action on the hand grenade and automatic. On automatic butt attached rubber recoil pad; and the fore-end design allows you to mount it as a wooden or plastic buttstock AKM and AK-74, and the folding stock AKMS and AKS-74. The frame body of the trigger GP-25 protects the machine from damage forend, and an elastic insert frame softens the blow of the receiver box when fired from a grenade launcher. When the GP-25 tests in the army revealed one more unpleasant recoil action – upon firing of grenade frustrated lid box receiver automaton, retained, as is known, head rod return spring. It was necessary to introduce a special grenade belonging rod with a hook, which replaces the conventional when installing GP-25. For a new machine AK74M this rod has become the standard.

ammunition in 10 shots transferred to the shooter “bag”, consisting of two cloth cassette slots shots, by 5 in each. Cassettes are located on the belts on both sides of the needle body, so that shots are available, in whatever position the shooter was not. The webbed special pockets for shots to the GP-25 can be carried out. Fire from the GP-25 is conducted from a standing position, kneeling or sitting. Direct laying fire, for flat trajectory being, usually: at a distance of 200 m – with an emphasis on the shoulder butt, 200-400 m – “out of hand”, ie. to butt, tucked under his arm. Shooting on a steep trajectory – with emphasis butt into the ground, board or roof BMP (BTR). The motorized rifle compartment GP-25 two armed needle, so that “grenade launcher” do yourself the smallest unit, serve them as a means of support and “assault weapon” melee, plays the greatest role in modern tactics. 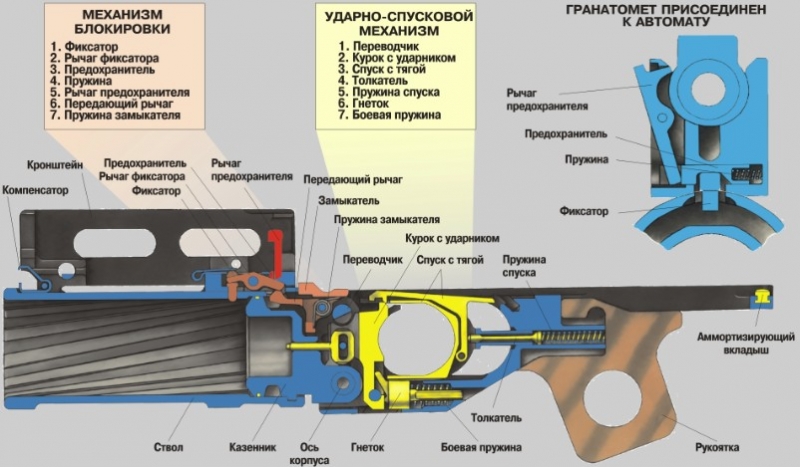 The low initial velocity grenade firing promotes large angles – path does not rise too high, flight time is reduced and pomegranate smaller crabs. But headwind demolition grenades becomes dangerous for the rocket launcher. Grenade not only increases the total weight of the weapon (AKM rifle, or AK-74, GP-25 weighs 5,1 kg), but also shifts the center of gravity forward and down. Accordingly shifted downwards and the average results point – weapon begins “nizit”, especially when shooting without a stop. Arrow-thrower should get used to shooting his machine gun. However, be accustomed, it can detect, the shooting bursts become much heap – natural result of weighting arms and said center of gravity. 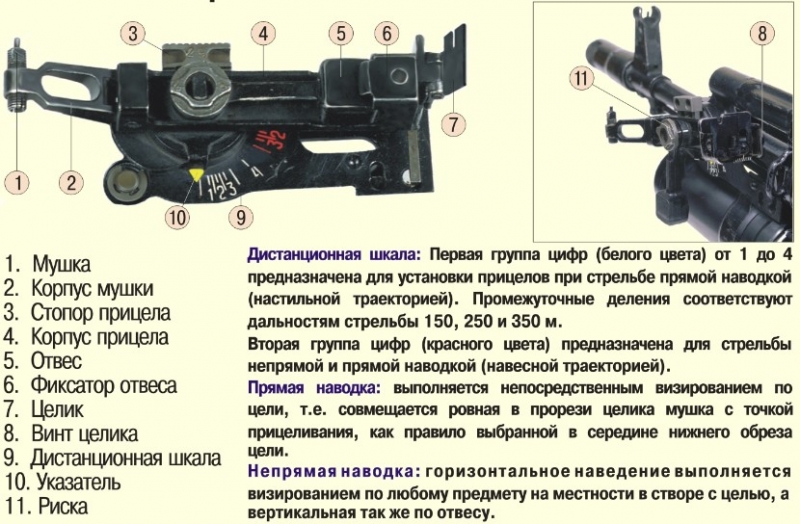 The performance characteristics of the GP-25 Fire 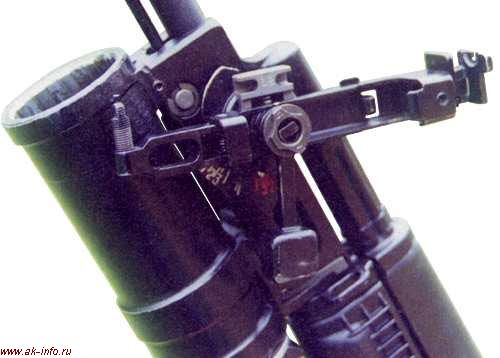