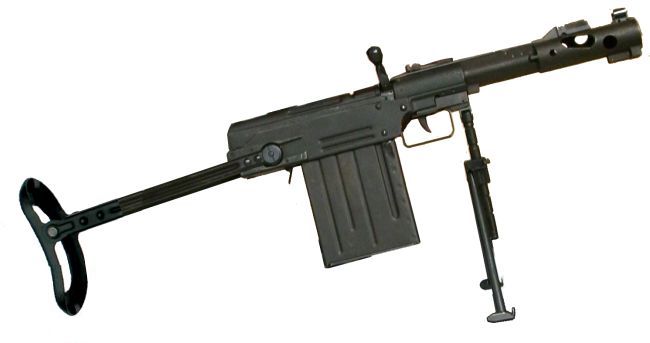 Silent grenade launcher, shotgun “DM product” (“storm”) It is a unique weapon, developed in the 1970s in the Soviet Union specifically for the armed units of the Army Special Forces on the basis of an earlier sample of similar purpose “D Products”.

The main objectives of SWAT to the case of escalation of the Cold War in full-scale military conflict in Europe were preemptive strikes on key structures of NATO forces, including headquarters and command posts, radarnыe plants, communications nodes, fuel and ammunition depots, attack aircraft based at airfields and, which is especially important, tactical missiles (mid-range) with nuclear warheads on board. To defeat such purposes, silent rifle range has been developed “DM product”, which allowed to strike as a non-armored equipment, and storage with the help of high explosive or incendiary grenade caliber 30mm, and the personnel of the enemy (eg, protection of objects to be destroyed) with special armor-piercing bullets caliber 9mm. To ensure the secrecy of weapons it was made noiseless and flameless. 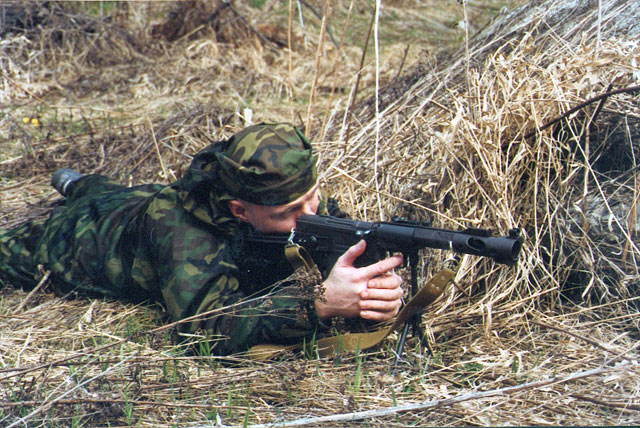 A fighter of special forces of the FSB of the Russian Federation “Pennant” firing from a grenade-carbine “DM product”.

Compared with its predecessor, “D Products” carbine DM product provides a great practical rate (through the use of store supply cartridges), as well as several smaller weight in the collection and less time transfer from traveling to combat (by the use of a foldable metallic butt instead detachable butt-holster). Catalysts are currently also a special set of time “DM product” there is still a navooruzhenii Army Special Forces units and special units to combat terrorism, Russian Federal Security Service, although he silent-automatic grenade launcher were issued to replace “Silence” and “Canary”.

Weight grenades about 130 gram, equipment – explosive or incendiary composition (produced as training grenade with inert filling), initial velocity grenade cartridge using PMAM – about 110 m / s. His grenade propellant charge does not, in its rear part has a rod, at a shot interacting with a movable piston-pusher expelling cartridge. For 9mm bullet cartridge PFAM stated penetration range 5mm steel 100 m, for grenades BMYA-31 stated penetration up to 10mm steel with a reliable ignition of fuel for the obstacle.

only Weapon “DM product” It represents a carbine with manually operated by means of a sliding shutter and the rotary power from the detachable cartridge box magazine. The massive store is located instead of pistol grip, that dictates some unusual grip when holding weapons pristrelbe. For firing grenades into the muzzle of the barrel has an integral 30mm glass-mortars, which before firing a grenade embedded in the front. DM product has a folding-down metal butt type machine AKMS. To ensure the accurate shooting of a fairly heavy weapons product is equipped with a removable DM height adjustable bipod. On top of the receiver is made adjustable open sights for firing a bullet, shooting granatoyna left side of the weapon set additional mechanical sight.

The performance characteristics of the "Storm" (DM product)